Preface: I spent 9 incredible days of riding in back-to-back exotic (for me) locations famous for their mountain bike trails. Ill lay them out in the manner that makes sense to me with liberal bragging thrown in for good measure. Week 1 was in Copper Harbor, Michigan for a work retreat that included daily riding. For week 2 I got on a plane to meet up with old friends on a desert adventure wed been planning for 6 months. I posted about the first part of week 2 here.

This is the final installment of my ride report from a lucky 9 days of glorious mountain bike travel. My ride report from week #1 and the first day of week #2 are linked above. As I mentioned in the Slickrock ride report, we hit the sandstone with optimism, hoping we would get to ride some terrain very different from what we were expecting on the White Rim. Then we’d spend a night by the campfire just outside of downtown Moab and hopefully be reunited with our missing luggage (containing my badass new titanium spork) and do the trail in three days instead of four. So with some rocky miles under our chamois we regrouped and drove to the airport. 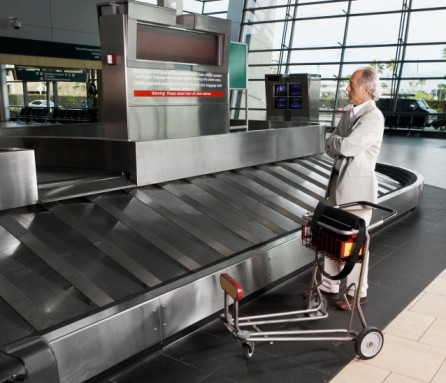 Huzzah! Our bags were there! The above picture in no way represents the Canyonlands Field terminal (think high desert lodge with two TSA screeners, a vending machine and a few Kokopelli-inspired objects d’art). In any case, my wife and I did a little dance of joy, thanked the airline employee and jumped in the truck on our way to the rally point. We met the rest of our patient and flexible crew and saddled up. Sunscreen, tire pressure, plenty of water, and ride food and we were ready. We hit the gravel for the first leg of day one, a long, fast roll from the parking lot at 313 to the switchbacks that would drop us into Mineral Bottom. 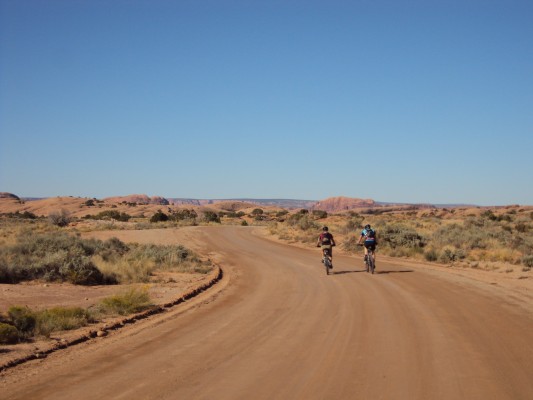 That first leg was a great way to get started, especially since we needed to make up some time. The eight of us roared down the mostly flat, smooth gravel road at a good clip. We were surprised to realize our first 10 miles ended so quickly at the top of the switchbacks that descend into Mineral Bottom. It took a little less than an hour to verify all the bike adjustments and that pack straps were tight. Our legs were warmed up and we entered the mindset of riding out the next 90 miles of this incredible trail in this alien landscape. 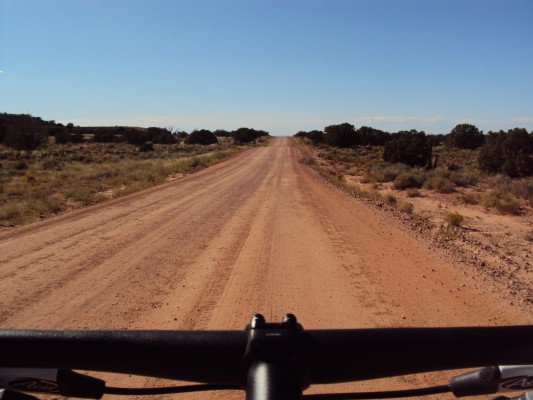 Our first steep descent went down without drama, unless you count the spectacular views as dramatic. They were! It was at this point that I realized the true extremes of altitude, terrain, trail conditions, and nature itself. We almost didn’t get to ride the trail due to a severe flood that washed out these very switchbacks a couple of weeks earlier. But all got repaired and we all made it down, including our intrepid support crew of Annie and Kirsten. They were driving the rented pickup that carried everything we would need to survive and be comfortable on our three day trek. Since there’s no potable water sources we had to bring all of our drinking, cooking, and bathing water. I’m damn glad we had plenty, since the combination of red dust, sunscreen and sweat are really nice to wash off at the end of each day’s ride. 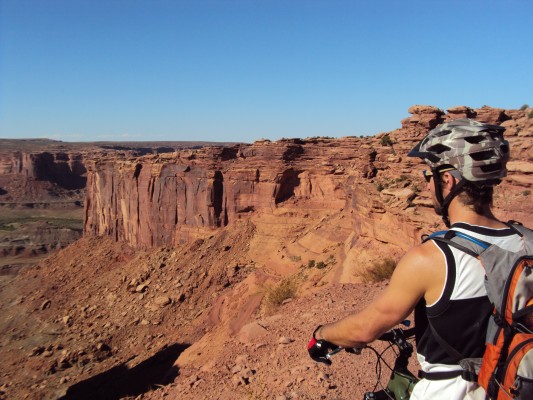 Jake was 1st on every climb

At the foot of Mineral Bottom we cruised along the Green River on a trail that showed evidence of the recent heavy rains. Almost all of the mud was dried, but the momentum-sapping sand pits were everywhere. Soft, fine red sand that made me want a Surly Pugsley or one of these concept bikes. There ended up being a good deal of hiking in the last leg before we hit our campsite on the first day. No matter; we were in good spirits, good shape and we had two more days of gorgeous mountain biking terrain to enjoy. Plus there was cold beer in the bed of the truck…

Day 2 started out with delicious bagels, cream cheese and smoked salmon. We didn’t skimp on any of the details on this trip; Jim put as much thought and effort into the meal planning as any other aspect of the trip. Sufficiently fueled, we set out on a cool morning for the next segment from the level of the Green River up to the crest at Murphy’s Hogback. The riding was rocky but we were having a great time. I believe somewhere in this section we fixed one flat, our first mechanical. After some heroic climbing on everyone’s part we stopped for lunch. 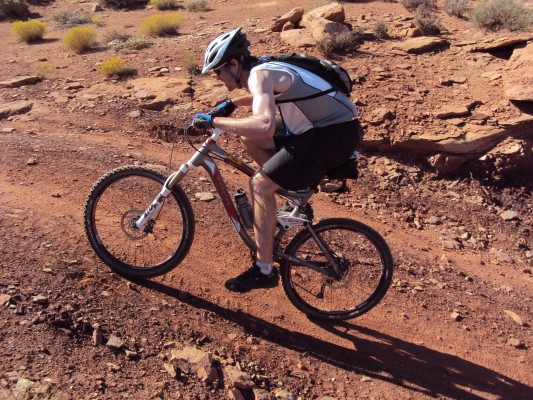 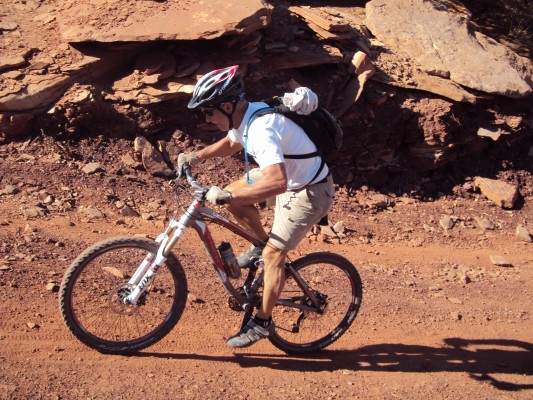 Jim Sr. showed us how much ass a man over 60 can kick. 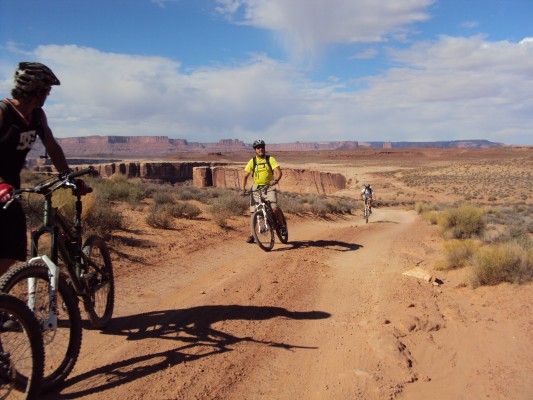 Jake, Norm, and Al at the top of a damn satisfying climb.

At Murphy’s Hogback we met two brothers who were doing the entire 100 miles in one day. They were making great time and I was really impressed by their casual description of starting out at sunrise and admission that neither of them had done the White Rim before. We wished them luck as they rode off and we set up our lunch station on the truck’s tailgate. A couple sandwiches later we reapplied sunscreen, filled our water, and got geared up to set off for the second leg of our ~40 mile day. Before we could set off we had a little fun. Jake let the air out of Chris’s front tire during our break and when he saw it was flat we told him of a “pro secret” to fixing flats: without taking the tire off the rim one should smear a paste of Gold Bond powder and water around the junction of the tire and the rim. Not sure if we were on the level, Chris got to work. 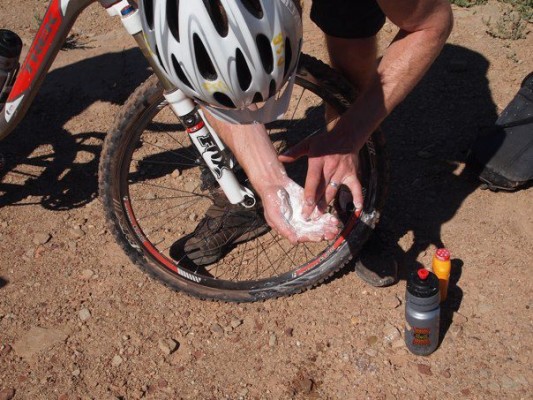 “How can this work?” was the thing Chris said that made it the hardest to keep a straight face. Nevertheless we got out the pump and would you believe it held air! We would let him believe in this powdery wizard magic for the rest of the trip.

The descent down Murphy’s Hogback was the gnarliest of the trip. Huge rocks, sharp turns and the whole time gravity wants you bad. Well, gravity got me in a spectacular manner. I was in the lead and went full boogie. The loose, rocky trail took a turn to the right but the bike and I stayed straight. Knowing it was wrong but with no other option I grabbed both brakes, lost the front end and when ass over teakettle into a Very Big Rock. I smacked it with authority leading with my face, and the speed of my get-off carried the rest of me across the top of this chunk of pain. Wadded up a few feet below the edge of the trail in a cloud of dust I sat down, took inventory of my assets and liabilities and waited for the rest of the group. Cut across bridge of nose, ear full of dirt, scratched down my neck and all across my chest. To complete the set I had a cut on my forearm and knee. Nothing serious enough to stop the ride but all together it was sufficient cause for a 10 minute clean and first aid stop. 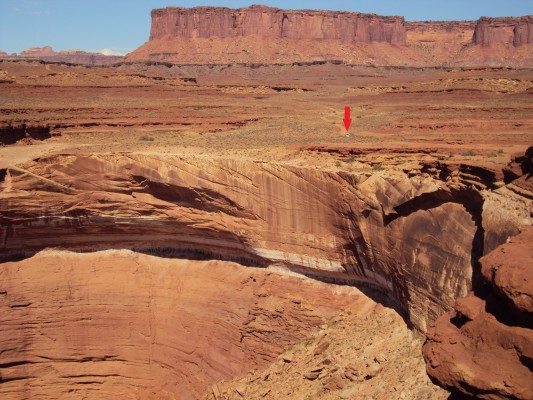 Patched up and back on the trail we rode on. My new goal was to get to the end of our day 2 ride to wash away the five pounds of desert dirt I accumulated during my gravity check. The ride was tough but we were rewarded with a fast final few miles with tons of whoops to jump. We arrived at the campsite pumped from a great day of riding and looking forward to beer and dinner. Tonight was pasta primavera, and we could all use the fuel. Plus this guy greeted us upon our arrival: 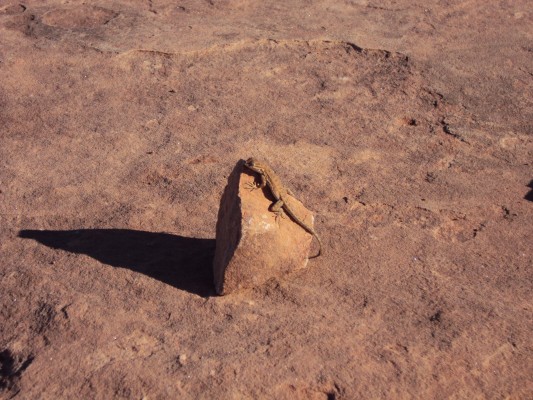 As day 3 dawned and we broke camp, Jim gave us the rundown of what to expect: a little more flatland riding before the final climb. It was going to be a big one. Getting to the top of Schafer Trail would be the cherry on top of the adventure, but to get there we had a morning of beautiful views and lunch at Musselman Arch. 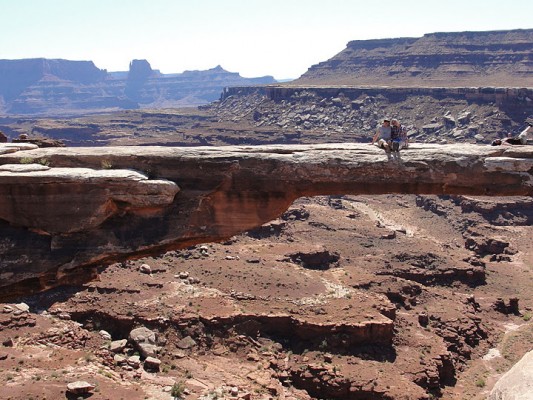 My lovely wife and I made very small by the immense beauty of Canyonlands.

So after lunch it quickly became all about UP. Not before one last mechanical, but at least it was one we were ready for. A broken chain only took a few minutes to fix; thankfully we had a ten speed power link at the ready. I must have taken my own advice about trail-side repairs. Once we were back in motion we took on this: 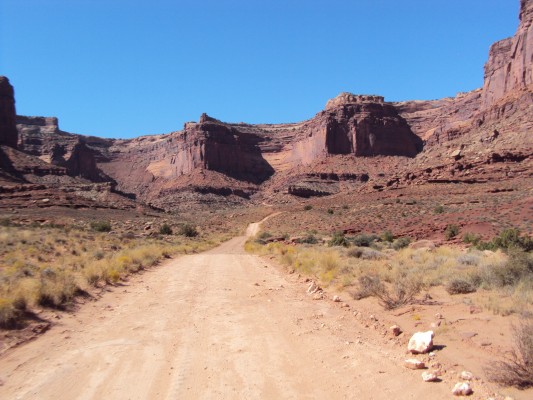 Yes, we’re going to the top of that.

Without going into the gory details it was steep. And hot. I pushed my bike a bit, and I’m not ashamed to admit that. We had a few in our group who rode the whole thing, which to me is a true feat of athleticism. Emily crushed it, our female destroyer and the only rider on a hardtail 29er. She was consistently one of the first three people to the top of anything the entire ride. Everyone finished it without too much drama, and the payoff was worth every ounce of sweat. 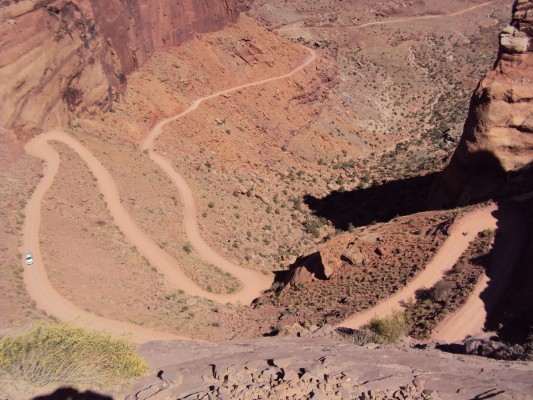 Oh that? No Big Deal. 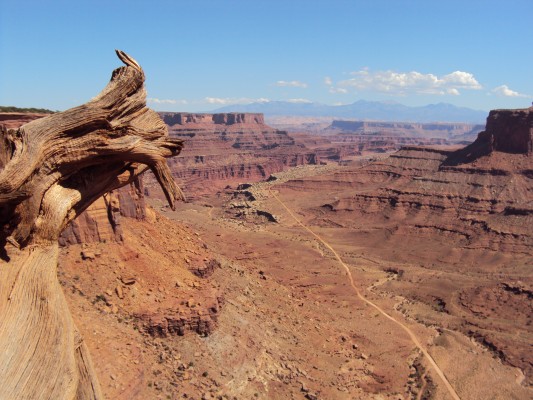 We came from waaaay down there.

So 100 miles later, countless photos taken, days of fun spent with great friends old and new, salty with dried sweat, dusty, tired, and with the satisfaction of a gnarly challenge taken on and completed, we rolled the last few miles to the parking lot. My awesome wife Kirsten handed out Swedish Fish as we crossed into the lot and they tasted so good! We loaded up the gear and drove back into town to return the rentals, devour lunch and get cleaned up. A great time was had by all and no matter what was thrown at us we kept rolling… 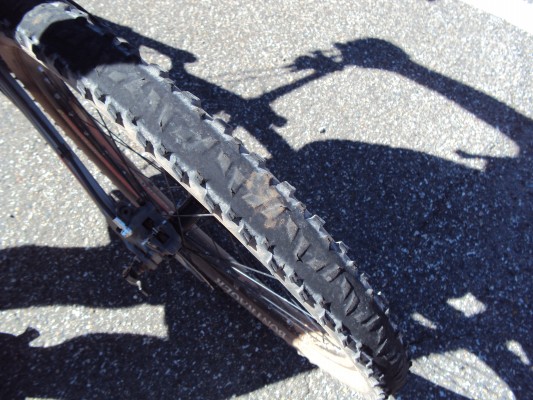 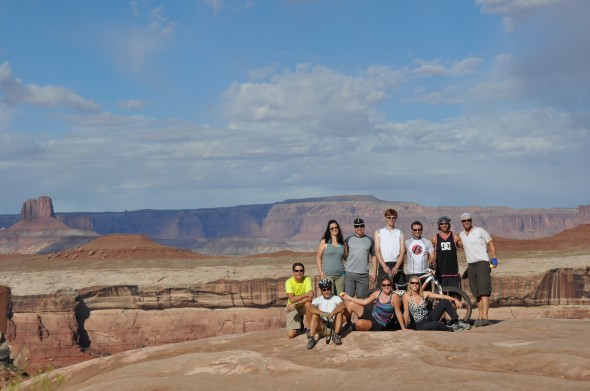 Love the flat tire prank – I gotta remember that one.

10 million points are yours! I won’t tell him you said he looked old.

Very impressive! I was just in Canyonlands last weekend, and I was telling my daughter’s boyfriend “people ride that trail down there!” Sounds like a great trip.

an epic in the true sense of the word….