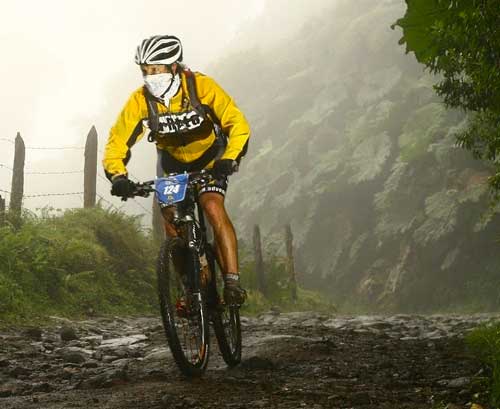 The 2010 La Ruta de Conquistadores mountain bike race across Costa Rica kicked off this week and the stage 1 results are already in with Benjamin Sonntag in first place but only by minutes. For those who are interested in following the action, race updates are being posted via Twitter and are also streaming video at livestream.com (though we couldn’t get the video to load earlier today).

La Ruta is a notable race for a couple of reasons. It’s one of the longest running mountain bike stage races at 18 years (the race website is adventurerace.com so you know they must have been one of the first). La Ruta is also considered by many elite athletes to be one of the toughest mountain bike races on the planet due to extreme climbs, sketchy terrain, stifling heat and humidity, and its remote location. The four stage race takes riders from the west coast of Costa Rica along the Pacific to the east coast and Caribbean Sea.

This year, race organizers have modified the rules a bit to discourage outside support. Traditionally Costa Rican competitors have had an advantage because they’ve had supporters follow them along the course on motorcycles. Without the support from outsiders this year, it’s anyone’s race.

In the women’s race, Leadville 100 winner Rebecca Rusch is looking for her first victory at La Ruta. Rusch last raced La Ruta in 2005 and is looking to improve on her fourth place finish that year. After stage 1 Rusch is about 30 minutes behind women’s leader Angela Parra Sierra but it’s a long race and anything can (and usually does) happen.

The race concludes Saturday so check out the La Ruta website for the latest updates and results.