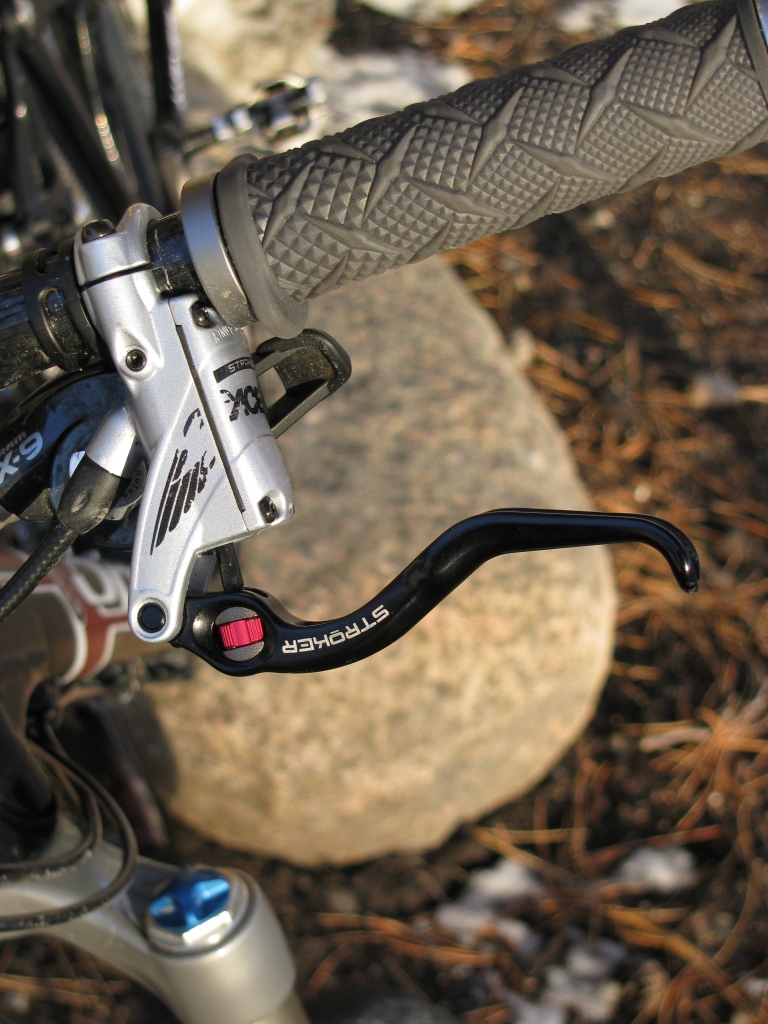 For those who like to ride fast down a steep downhill or if you live life on the edge waiting to hit your brakes at the last possible minute, Hayes Stroker Ace brakes may be perfect for you. Hayes has upped the ante once again with the Stroker Ace brakes; these babies have a slightly larger and thicker brake lever than the otherwise identical master cylinder of the original Hayes Strokers and an all new mono-bloc forged 4 piston caliper (like a F1 brake caliper). I just finished testing the Hayes Stroker Ace brakes and these new features plus the larger brake pads have delivered an eye popping experience.

The Stroker Aces advertised brake system weights of 440g (6 rotors) and 520g (8″ rotors) are slightly less than my measurements of 452g (for my 6 rear rotor) and 552g (for my 8 front rotor). Installing the new brakes was pretty straight forward and there was even enough hose for long travel bikes. I have tried riding with a 7 rear disc and found the braking was too powerful back there for my riding style. The 6 rear disc works well for me and it even saves some weight! 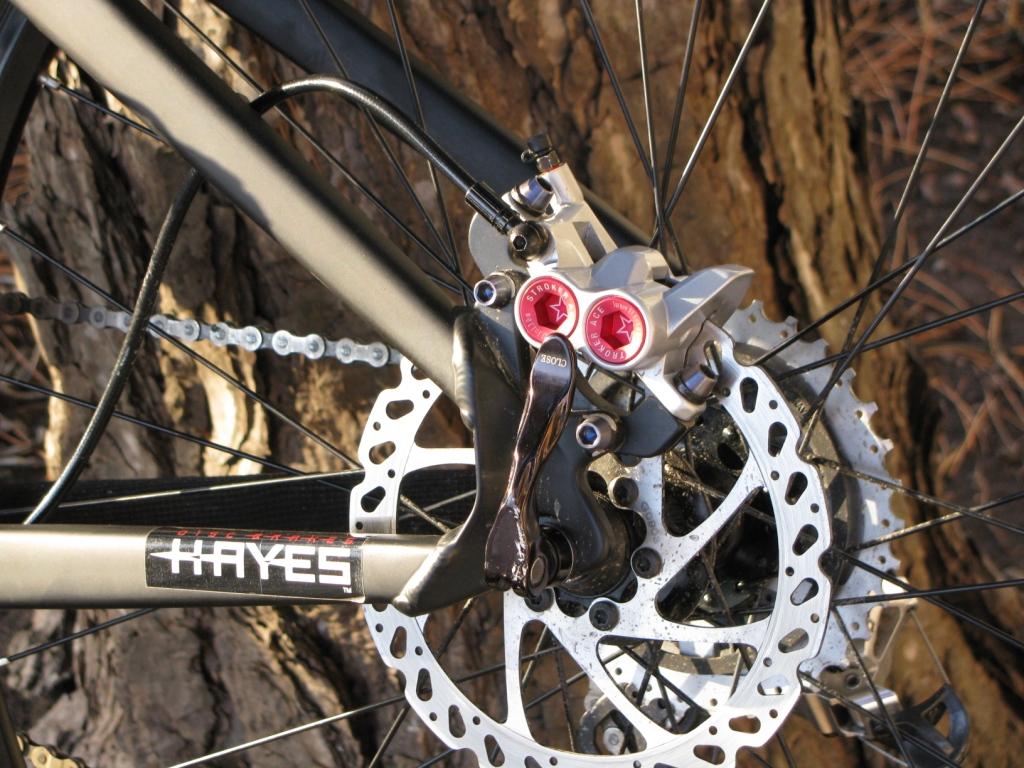 Now on to how well the Stroker Aces actually performed on the trails. It took a few runs to break in the pads and two caliper adjustments to finally get the Aces set up just right. During my testing, I evaluated several aspects of the brakes performance including noise level, rotor and pad durability, brake modulation and release, biting force, torque, and fade. The following chart is a summary of my observations.

I was really impressed with the modulation of these brakes and gave it a high rating of 9 out of 10. The Stroker Aces really had a lot of control despite the large pad size and four pistons. There was moderate braking torque when first applying the brakes. After subsequent applications of the brake, the forces built up and I gradually had to back off the amount of braking required. Usually when you keep applying brakes they tend to fade or need more force, but these do the opposite. After changing the brake fluid to DOT 5.1, I found the brake actuation to be a little better.

I rated the silence of these brakes a six out of ten. It was a very wet day when I noticed the rotors and pads generating some noise that was difficult to remove. The noise was at slow speeds and did not occur at high speed application of the brakes. Last, the rotors and pads held up well to my testing, there was hardly any sign of wear on either part. I’ll be keeping the Stroker Aces on my rig to see how they do in the long run though.

Overall, these brakes work extremely well and if you have a long legged all mountain, black diamond or DH mountain bike, get yourself a set of Hayes Stroker Aces and you won’t be disappointed! 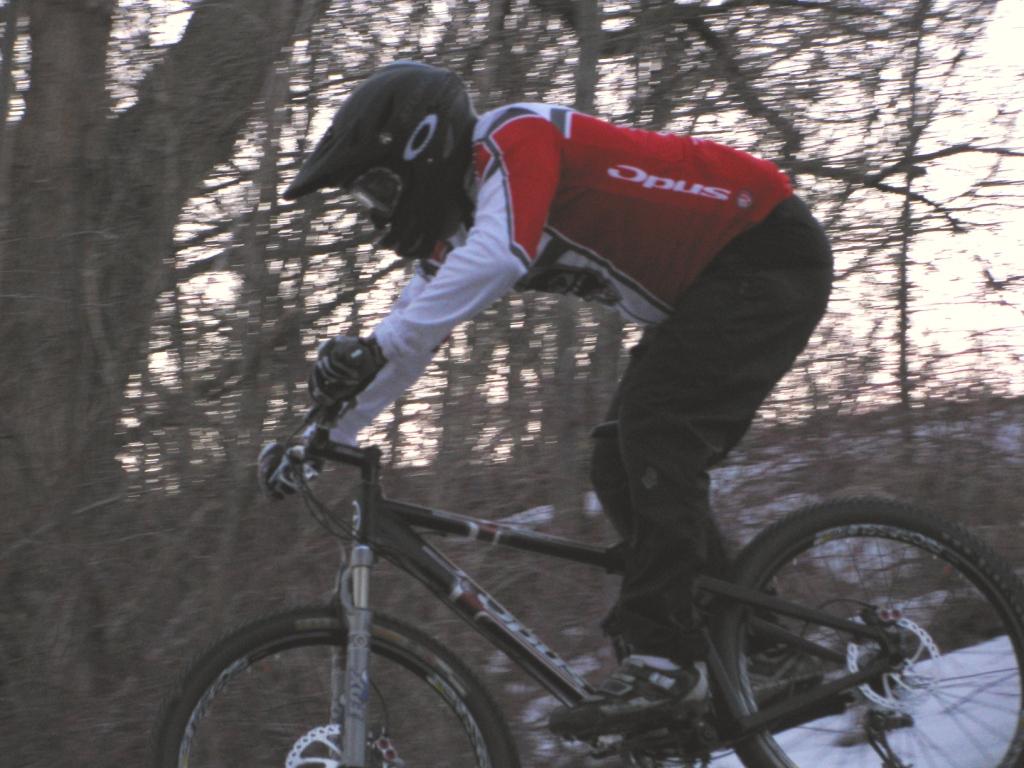 Community
Thanks for Reading Singletracks
Community
Women’s Freeride Progression this Past Week has Been Absolutely Insane:...
Progression
What do you Drink on MTB Rides?
Gear
Summer MTB Looks from 10 Brands
Subscribe
Login
Please login to comment
2 Comments
Most Voted
Newest Oldest
Inline Feedbacks
View all comments

Just finished putting a full set of these Stroker Ace’s on my FR/DH MTB, and so far I totally love them. Lots of stopping power especially on fast descents, great modulation, ease of mounting and fine tuning. I will be taking these to Santos next week for a serious workout in the freeride gauntlet and then further north later on for some sweet DH runs. I immediately changed over the hydraulic fluid to the 5.1 fluid, being I have used this in my other Hydraulic brakes and this stuff works much better than the lower grades. Further review update coming after some serious FR and DH.

Well that makes two of us. I was really impressed with these brakes. I totally loved the power of them. But i did find that it took a bit of patience getting the caliper set correctly, due to the long pad..But then again Code’s had the same issue.

Glad to see your liking the brakes.