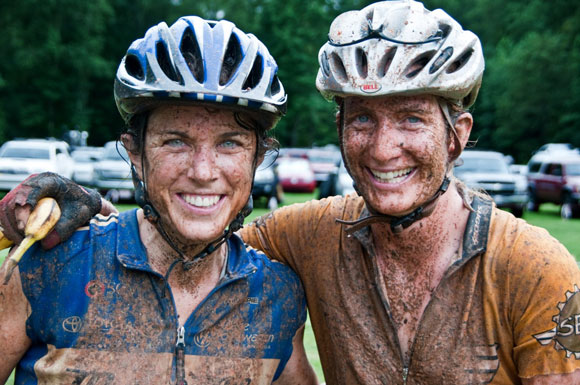 This past weekend the annual Fool’s Gold 100 took place in the north Georgia mountains near Dahlonega with some of the most extreme weather conditions we’ve heard of in a mountain bike race. A dirty century mountain bike ride is tough on any day and the course through the Bull /Jake Mountain trail system is a killer with nearly 14,000 of feet of climbing (at least that’s what we heard). The Fool’s Gold 100 is part of the National Ultra Endurance (NUE) series so it attracts some of the country’s best XXC mountain bikers.

Overnight rains lingered into the morning and the race started off under a flood watch issued for the area. Jeff Schaulk was the fastest around the first 50 mile lap in 4:15:26 and reported his brake pads had been completely ground down from the gritty, wet conditions. Christian Tanguy finished just minutes behind Schaulk and both riders asked race director Eddie O’Dea to cancel the race (and the second 50 mile lap) for the safety of the other riders. 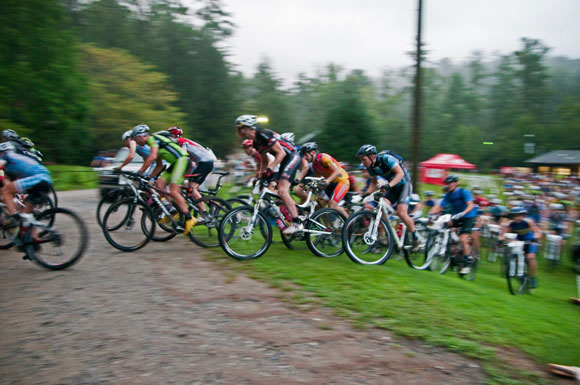 After Aid four, there was a straight, nasty, steep descent. I was fully into it before realizing that I had
NO BRAKES. I decided to try to ride it out, reaching speeds up to 30-40mph, scard sh**less, and jus
holdin on! It was then that I realized I wouldnt make the upcoming turns and had to dump it. The
bike was in the trees and I slid thirty feet downhill suffering bruised ribs and requiring eight stitches.

Tanguy asked if I was ok and then went on. In the process I lost the bead on my tire but quickly made
the repair and moved on. After crossing the finish line, I pretty much broke down upon learning about
the 50 mile cut. I was gonna do it but it wouldnt have been good.

Out of 300 riders who started the day, only 180 finished. The last rider crossed the 50-mile finish line after 9 hours, 56 minutes on the bike. Talk about dedication!

If you’re looking for a challenge on the mountain bike (and a good time, I swear!) mark your calendar for next year’s Fools Gold 100 – this is a race that will not disappoint.

Gear
Clipless Cleat Experiments: The Fore and Aft of It
Trails
Have You Ever Encountered an Intentional Trail Trap?
Community
Max Commencal Talks Women's Race Teams, Alloy, and Money
Community
Outerbike Has Returned, and So Have Some Demo Bikes
Subscribe
Login
Please login to comment
3 Comments
Most Voted
Newest Oldest
Inline Feedbacks
View all comments

I was there. Conditions were bad indeed. Two years ago I did the 50 mile race and finished in 6.5hrs. This year it took me 6.5hrs to make it a measly 30 miles, then I quit, took FS roads back to the finish area. My bike was still working, but I knew I was on borrowed time, all around people’s bikes were breaking down. Drivetrains and brakes were getting eaten alive. Post race inspection revealed that I now need a new rear brake rotor, new pads all around, new pedals, and had to clean my freewheel internals. Still have to look into the headset.

I almost did not start and wished I had DNS’d. I knew better having been at Helen in 1995. The bike just gets trashed. I’d have rather walked away and paid the $100 I paid to race and have my bike in the shape it was in BEFORE the start of the race. Now I have to spend more $$$ to get my bike running good.

And I gotta go back to Dahlonega and help work on those trails to get my karma right.

I was feeling good at 19.5 miles in at 2.5 hours. I didn’t stop at sag 2 and hit the wall b/n 2 and 3. Tough sledding up steep, unrideable trail that was a challenge to hike a bike up. At 3, I had decided to DNF and wait for a friendly face. I waited long enough to feel good again and rode on to sag 4. I was preparing to go back out and finish when a friend of mine came by and said he had just “walked” the loop I was headed too and I wanted no part of walking in the peanut butter that lie ahead. I rolled the 3 miles dh to the finish and DNF’d with 42 miles in a little under 7 hours total time.

It was hard. Lesson learned (again) on how harsh it is on the bike to go out in these conditions. It isn’t worth it for the trail or the bike.

[…] I’m hoping to try my hand at cross country racing in a few weeks, just to see what it’s all about.  My next big mile race will likely be Fools Gold 50 mile in August.  I’ve got a score to settle with that one after my DNF at last year’s mud fest. […]