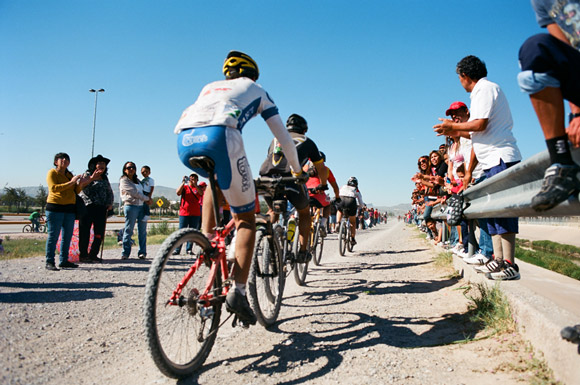 In case you missed it, the March issue of Bicycling Magazine featured a great story by Articles Editor Lou Mazzante about the epic Chupacabras 100km mountain bike race in Jarez, Mexico. A border town just south of El Paso, TX, Jarez saw an average of almost 9 murders per day in 2010 as rival drug cartels continue to duke it out with government officials and with each other. As if mountain biking weren’t dangerous enough on its own!

I got a chance to ask Lou about his experience racing Chupacabras and to find out more about the MTB trails and the scene in Juarez. If you haven’t read the article yet, I highly recommend reading it online (or in the March issue of Bicycling) then checking out our Q&A below.

How technical is the (Chupacabras) course itself? Where did you see other riders getting hung up? How much of the course was singletrack vs. gravel road vs. pavement? 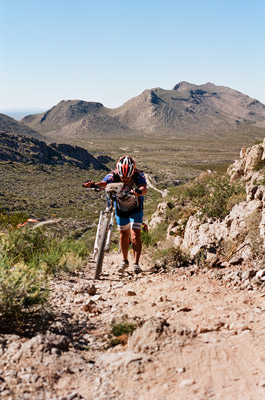 For the most part, its not too technical, which is why you see so many locals out there on department-store bikes. The course requires more stamina than skill. It is roughly really divided into two sections, and looks like a cherry-stem loop. The stem in this case is roughly the first 25 miles, which take place on the flat, smooth top of a the levy running through the edge of the Rio Grande in Juarez. The whole time, youre within 100 yards of the U.S. Mexico Border. The course then has about a 25 mile loop in the mountains. About half of that is jeep road, the other half singletrack. There are some very technical climbs in the mountains but the long line of racers means most dismount and walk them. One especially horrible hike-a-bike is known as King Kong steps and is the site of many, many cramping riders. Its not the terrain or trails that are demanding, its the speed at which most riders attack the flat early sections, and the overall length; 60 miles is a long way to race, whether the terrain is technical or not. Cramping is the most significant hazard, followed by flats, heat exhaustion and dehydration. Though I did see quite a few crashes, too.

What kind of research did you do before the race in terms of security, logistics, etc.? Would you recommend it to other Americans looking for a challenge? 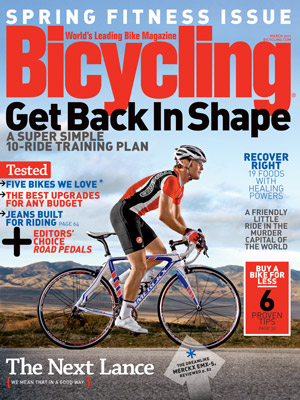 I researched it the same way I would any story. I talked to people who raced it, to organizers, to shop owners in El Paso, which is right across the border. I read Charles Bowdens latest book, Murder City, which is the best account of whats happening in Juarez that I came across. Theres a librarian at the New Mexico State University who runs an online news group, the Frontera List, which tracks the daily murders Juarez and links to relevant news stories. I set up Google alerts and searched through the online archives of most major news outlets. Sadly, most outlets only recently began devoting significant resources to covering this warand it is a war, every bit as deadly and significant as Afghanistan and Iraq. And most reports are very thin. Reporters in Juarez risk their lives if they dig too deep, so there are too few people doing real investigative journalism down there.

Initially, photographer Brian Vernor and I planned to stay in Juarez, but at the last minute changed our minds and stayed in El Paso. Its only a 10 minute ride across the border and many racers stay there, even those from Mexico. Riding into Mexico with a group of racers also gave us a unique angle to the story. But the main reason we stayed in El Paso was because it is safer. It would be difficult for me to recommend that anyone compete in this race. Simply traveling to Juarez involves so much risk, and the situation is worsening. Its a decision everyone has to make for themselves. That said, I felt safe during the race, and as far as I know, no one has ever been a victim of a crime while racing. For what its worth, Id go back. The people involved with the racefrom the organizers to the competitors to the fans and volunteersare some of the most genuine, dedicated people Ive ever met on a bike. Its truly a special event, unlike anything else Ive ever experienced.

Outside of the Chupacabras race and the original organizers, is there much of a local mountain biking scene? Is it growing?

There is, but its very much linked to the Chupacabras. The race introduces so many people to the sport that it cant help but grow it. The organizers also sponsor a youth team of local riders and during the race, they host mini-races that attract several hundred kids. The entire state of Chihuahua, the state where Juarez is located, has a strong mountain bike culture. Its home to the world-class riding around Creel and the entire Copper Canyon region and several mountain bike series run throughout the year. Most Chupacabras competitors come from Chihuaha. While many are locals who only ride a few times a year, plenty of others are members of club teams and serious racers. Of course, fewer people are riding now, because its just not safe. Many make the quick trip across the border to ride in El Paso, which has its own thriving scene.

Over time, do you think a big mountain bike event like Chupacabras can make a difference in a place like Juarez?

As much as Id like to say yes, I think what is going on in Juarez, and the rest of Mexico, is so complicated, and rooted in the countrys history, economy, politics, and culturenot to mention its relationship with the U.Sthat no single event can change it. Im oversimplifying here, but were talking about a multi-national $50 billion drug trade, fought over by cartels that have operated and thrived with little government interference for decades, and an insatiable appetite for drugs just a few feet away in the U.S. Its a socio-economic crisis that I wish a bike race could solve , but I dont see it happening any time soon. What the Chupacabras does do is give hope to thousands of people who desperately need it. It gives them an escape, a brief respite, and a challenge that so many look forward to. The Chupacabras may not make a dent in the war for Juarez, but it does make a difference for the tens of thousands racers, volunteers, organizers and fans who come out every year to support this incredible event.

Gear
Mountain Bike Tire Repair Tips: From Emergency to Semi-Permanent
Gear
The Maxxis Minion DHF Tire is Still the One to...
Gear
These MTB Deals are Fire, including 40% off Patagonia Dirt...
Gear
Never Underestimate the Power of a Good Zip-tie
Subscribe
Login
Please login to comment
1 Comment
Most Voted
Newest Oldest
Inline Feedbacks
View all comments

Just finished reading the original article and the interview. What an incredibly inspiring event! But what a horribly situation in the city of Juarez. Over 3,100 deaths per year? That is enormous and so very sad!

Oh, and I liked how Lou was thinking throughout the race about the Mexican he had met, figuring that he’d have dropped out already. And at the end he looked at the statistics and he’d been beaten by 13 minutes… that was simply legit!