Preface: I spent 9 incredible days of riding in back-to-back exotic (for me) locations famous for their mountain bike trails. I’ll lay them out in the manner that makes sense to me with liberal bragging thrown in for good measure. Week 1 was in Copper Harbor, Michigan for a work retreat that included daily riding. For week 2 I got on a plane to meet up with old friends on a desert adventure we’d been planning for 6 months.

Its damn dark up here at 6am, but there are a dozen bikes lined up on the fence outside and our tour guide is handing out maps. Aaron Rogers is our local guide, the president of the Copper Harbor Trails Club and viciously fast on the local dirt. I guess that’s how it is when you’ve built most of the trails yourself. Inside the lodge we’re eating breakfast, filling Camelbaks, making a last minute gear check and getting our layers on right: not too warm and not too cool for the early morning Michigan Upper Peninsula weather. 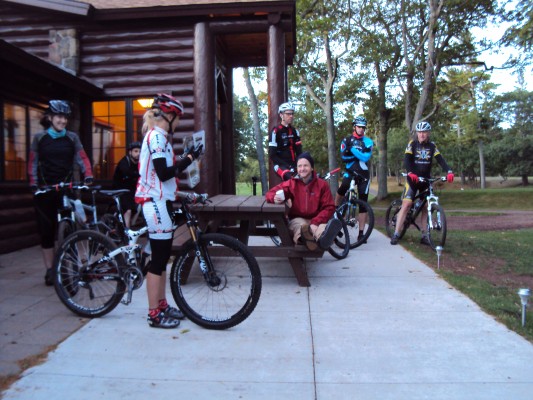 The trails. That’s what you want to hear about, right? First a word on the setting. I moved to the midwest (in winter. great idea) for work and have been trying a little of this and a little of that to get my fix of the type of singletrack riding I had grown used to back east in the Philadelphia area. Try as I might the fact remains: there is a lot of prairie around here. It can be great for things like a gravel metric ride, but big climbs and long descents are few and far between unless I want to do some serious highway miles to get them. And drive we did to get to Copper Harbor Michigan. Seven hours in the car through Wisconsin and then the Upper Peninsula to the tip-top of the finger that jabs into Lake Superior. The scenery was beautiful – we went through a tunnel of trees that was miles long, saw no less that three bald eagles, a coyote and many deer. If you’re doing a five day, four night trip like this a little driving won’t kill you, and I got to see some unfamiliar parts of the country that were rugged, remote and picturesque. OK, now on to the riding. 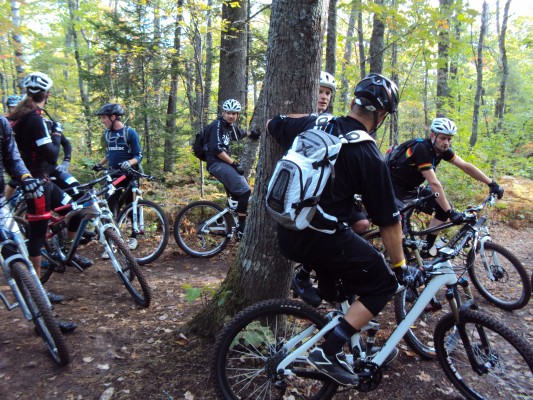 It’s amazing. Every damn last foot of singletrack was impressive. I’ll admit I’m a cheap date – give me a halfway decent bike, some dirt to roll on, and some trees to dodge and I’m happy. But the dozen people I was riding with had true skills, including the entire mountain bike development team responsible for bringing to life the rig that won the world downhill championships this year. If they were digging these runs, you know the trails are good. The terrain went from rocky, rooty big-drop downhill-type runs to cush cross country tracks through the pines. The finishing touches were being put on an A-line style run down from the top of the peak, right next to a set of boardwalk switchbacks that take you down (or up) the steep face of Keweenaw Mountain. With the right basket of technical riding skills you could lace together several days of grinding climbs and extended, beautifully flowing descents that leave you looking like this: 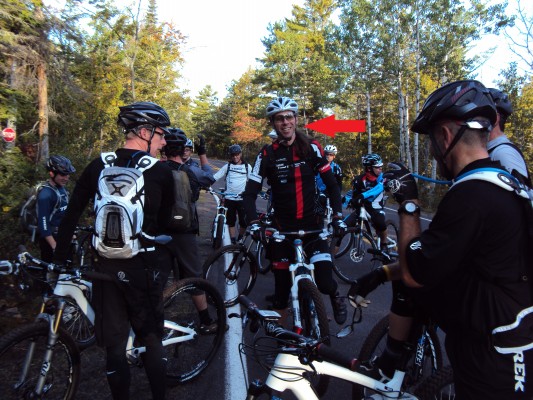 The photo above was taken at the bottom of a trail simply named Flow. Recently completed, it is a masterpiece of switchbacks, whoops, ripping ridge lines and the sweetest, plushest dirt I’ve ever rolled a knob on. We all looked like Dave when we reached the bottom: blissed out in the realization that this is work. On our final day we took advantage of the shuttle service available from Keweenaw Adventure Company. You can believe we chose Flow a few times that day. Throw in some descents of Woopidy Woo and we were all feeling just right. 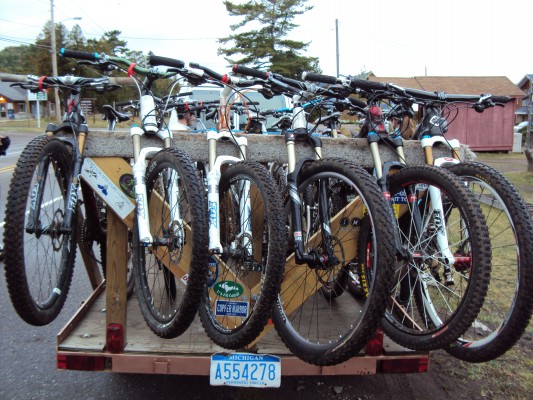 Did I mention the accolades? I’ve spent enough time praising these Michigan miles so here’s a ringing endorsement from IMBA (and they know about this sort of thing): Copper Harbor has the distinction of being one of their “Epic Rides.” That’s a hell of an honor since there are only 48 in the world that the association has designated. All you have to do is air up your tires, grab a map and hit the trails in this order:Copper Harbor Loop, Garden Brook, Woopidy Woo, Garden Brook, Blue Trail, Dza Beet, Here We Go, Ma Maki, Say Hello, Dza Beet, Simeh, De Deet, Red Trail, Clark Mine Road, Pauls Plunge, John Lincoln Green, Manganese Road, Ma Maki, Der we Went, Stairway to Heaven, Copper Harbor Loop to Trail Head. Do yourself a favor: check out the interactive map here and watch the videos that accompany most of the trails. I particularly like reminiscing about Stairway to Heaven. 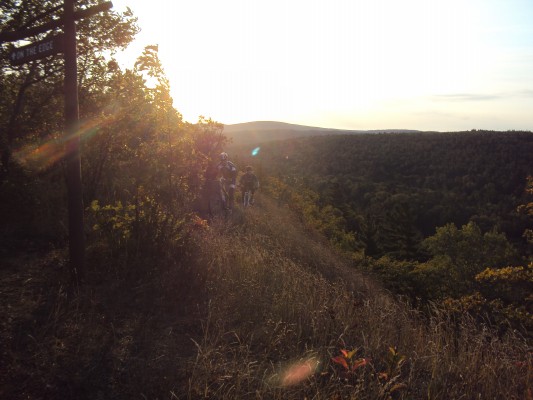 So there you have it. If you’ve got the opportunity to get to the north country, or are looking for a centrally located destination for a sweet riding retreat, hit up Copper Harbor. You won’t be disappointed. There are rustic cabins to toast your riding buddies and tell tales by firelight at the Keweenaw Mountain Lodge, gear outfitting and shuttles at the Keweenaw Adventure Company, and tasty post-ride grub and beers to be had at the Mariner on the main strip in town. All in one spot for your riding pleasure. Bring your legs, your skills and your camera – they’ll all be well used up here.

Sounds like so much fun! My brother rode there this summer… I was so jealous!

I was up in the Keweenaw Peninsula for a week in June with some friends and had a blast. We spent a day in Copper Harber, but I wish I could have spent another day. Beautiful riding up there. I’m hoping to get back out there next year as I think a trip this fall yet might be out of the picture.

I’ve been to the UP four times and can honestly say you’d be hard pressed to find better trails with great scenery anywhere in the midwest. I’ve rode Copper Harbor and am blown away every time,however there is great riding from the harbor,Houghton to Marquette and everywhere in between.Plus did I mention all the scenery? The locals are cool and willing to show you around. If you go I HIGHLY recommend stopping by the Keewenaw Brewing CO. for some tasty microbrew. Believe me once you go you wont want to go back home. The best time to go is in August to September,that’s when all the bugs die off and you can sleep on the shores of Lake Superior under a star hewn night sky.

Cool article. I was lucky enough to attend the Copper Harbor Fat Tire Festival as a spectator this year. Wow, what a great time with great trails and people. I didn’t race this year but I keep saying I will be there next year with a number plate. Don’t forget about the Red Trail and Mango, I’ve heard there will be more new trails next season as well. Chill town + amazing IMBA trails = road trip!

I rode there years ago before there was a club and good trails. Beautiful area, I enjoyed my time in the UP. I am looking forward to returning someday soon and riding all those sweet trails. Thanks for posting, it brings back a lot of great memories!!!!!

Wow, I have heard so much about this area from one of our core riders here in Southern IL where the Shawnee NF is and he has always said that this area in the U.P. is by far his favorite place to ride. Will definitely have to check it out soon.