The name “Lenzerheide” will ring a bell in the minds of most mountain bikers around the world, thanks to this small mountain town having played host to UCI World Cup events in both 2015 and 2016. And unlike some venues who only host either downhill or cross country, Lenzerheide was home to both events. The World Cup will again be returning to Lenzerheide in 2017, July 8-9.

Not only will Lenzerheide have played a significant role in the World Cup for three years running, but they’ve officially been awarded the 2018 UCI Mountain Bike World Championships. Naturally, Marco Boni, who leads bike marketing for Lenzerheide, is ecstatic about this incredible opportunity to showcase what Lenzerheide has to offer as a mountain bike destination, while hosting to the premiere mountain bike event in the world.

After sharing a meal with the folks from Lenzerheide Tourism, it’s clear that the bike park is very much their primary focus for growing mountain bike tourism at the present time. And while downhill World Cup events tend to get much more publicity in the MTB media than their lycra-clad counterpart, the greater Chur/Lenzerheide region is extremely supportive of XC racing… thanks in part to Olympic gold medal champion Nino Schurter calling the city of Chur his home.

To get a taste of the UCI Downhill World Cup action from Lenzerheide this past year, check out this video:

After being somewhat stunned, but mostly confused, that the lift companies in Morzine were closing all of their lifts to mountain biking at the end of August, it was a breath of fresh air to return to common sense and open lifts in Lenzerheide in the middle of September. In fact, according to Marco, Lenzerheide will run its lifts for mountain bikes as long as the weather permits. They’ll open as early as possible (usually the end of May), and keep the lifts open as late as possible. Generally the snow starts to fall in mid- to late-October, but if it doesn’t they’ll keep the lifts spinning until the white stuff starts to descend–sometimes into December. Consequently, they claim the longest downhill mountain bike season in Switzerland, and possibly even in the whole of Europe!

That long season leads to a ton of mountain bikers using their lifts every year. While it can be difficult to get accurate numbers, best guesses put Lenzerheide at 100,000-120,000 riders per summer. But despite this massive influx of big hit bikes, 93% of Lenzerheide’s revenue is made during the winter, and only 7% is made in the summer. As climate change continues to affect the Alps and the globe (just look at the extremely warm, dry start to the season that they had in Champery), destinations like Lenzerheide have realized that they need to double down on their marketing to non-winter sports markets. At the very least, they’re missing out on summer traffic that they could be bringing in during what used to be the “off season.”

The most natural transition for a ski resort town to summer business is found in mountain biking, and the entire Lenzerheide community is on board with MTB as the core business model during the summer. Seventy percent of their summer marketing is targeted to mountain bikers, and increasing MTB traffic has been their main business goal since 2009.

Lenzerheide claims that they’re already the most famous mountain bike destination in German-speaking Switzerland, and that they have the #1 bike park in Switzerland. Despite this claimed success, they’re constantly trying to progress and expand the park.

Can Lenzerheide become “the Whistler of Switzerland,” as they hope? I headed to the park to sample the goods for myself.

After a long three weeks of riding, I decided to easy-style my way into the bike park by warming up on the blue flow trail, progressing to the red, and dabbling just a little bit in the black.

The flow on the blue trail was absolutely dialed, especially for a trail bike–beautiful berms, flowy tables, rhythm sections–so my confidence got an immediate boost! After a run or two on the blue, it was quickly on to the red trails.

The red runs were, again, basically flow trail runs, but with bigger jumps and wooden features incorporated. If a table or gap was too big for my comfort level, I was able to easily ride around and continue on my way, ripping through berms, flowing over rollers, and generally having a ball! After being pummeled for two days on uber-techy backcountry trails, the flow and the speed was an absolute treat.

After riding the blown-out trails of Les Gets and then comparing them to smooth hero dirt in Lenzerheide, I would trade in a dozen rutted-up runs for a pair of maintained, pristine flow trails any day!

I did sample some parts of the black runs, but shh! don’t tell anyone, since I wasn’t supposed to be there with the trail bike from the rental shop. Most of their rental fleet consists of full-blown freeride bikes, which are designed to handle the rigors of the entire bike park.

The difference couldn’t be more stark when switching from the red trails to the black. Gone was the maintenance, the flow, the smooth, supple singletrack, and in its place were gnarly rock gardens, sketchy root webs, and ruts so deep that braking bumps don’t even have a chance to form.

The black run is a true World Cup race run and while I was able to gingerly pick my way down a couple sections of it on my trail bike, road gaps and massive step downs, visible from the lift, put the fear of God in my heart and kept me from attempting the entire trail.

The Scale of Lenzerheide 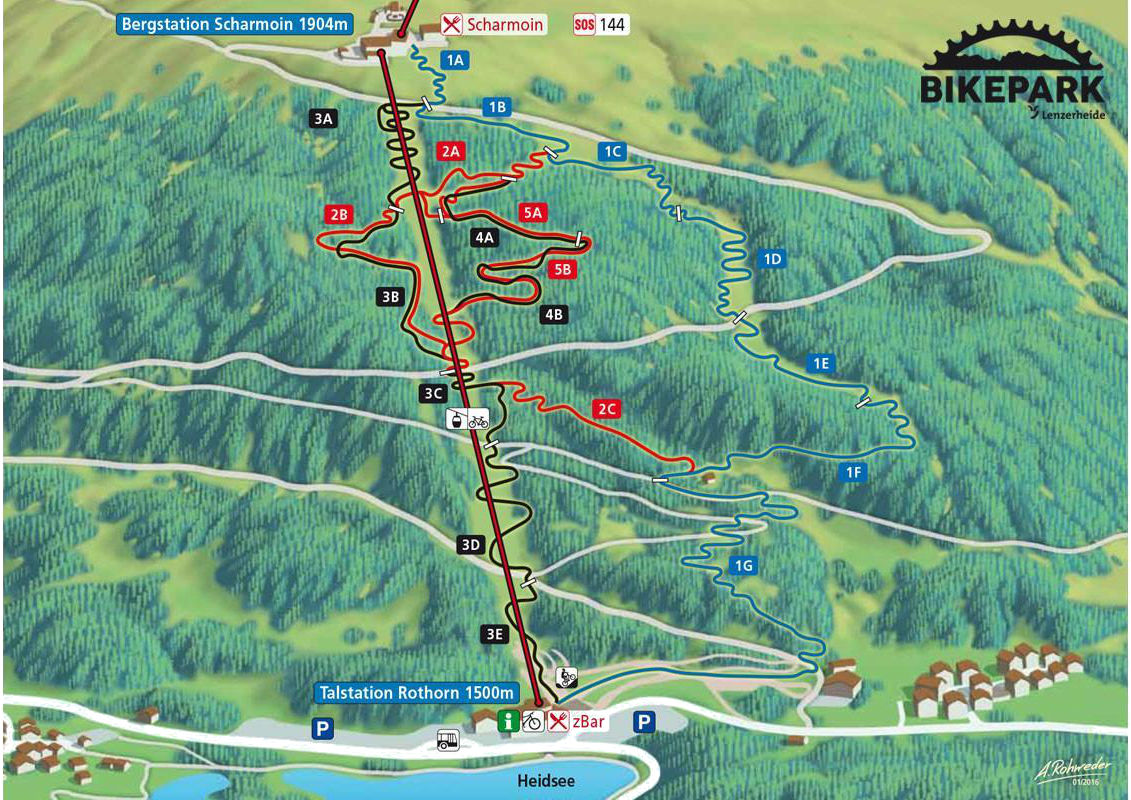 Lenzerheide is currently home to five bike park trails, but they are hoping to expand soon. If they haven’t already, they should soon have approval to build three brand-new downhill runs.

While more expansion is in the works, Marco noted that they don’t plan to build a sprawling bike park using all the lifts in the region. Instead, they want to keep the DH trails contained to this small area, off of one, single gondola.

Sticking to a single gondola does limit the amount of traffic, though. The busiest day on record in the Lenzerheide Bike Park saw 4,500 runs, and the lift was operating at max capacity.

After experiencing just a small part of the endless sprawl of Portes du Soleil’s 25 lifts, it’s difficult to see how Lenzerheide could hope to make an impact anywhere near what Whistler has made, even in central Europe. Sure, if you slice the pie finely enough, you’ll win every time: calling Lenzerheide the most famous MTB destination in German-speaking Switzerland is a pretty narrow slice, considering French-speaking Switzerland next door and the massive lift systems that run across national borders into France. There is also epic mountain bike trail development happening in Austria, not to mention nearby Italy.

That said, the quality of the work that Lenzerheide continues to invest in their bike park is undeniable, and it keeps riders from all over the region coming back again and again.