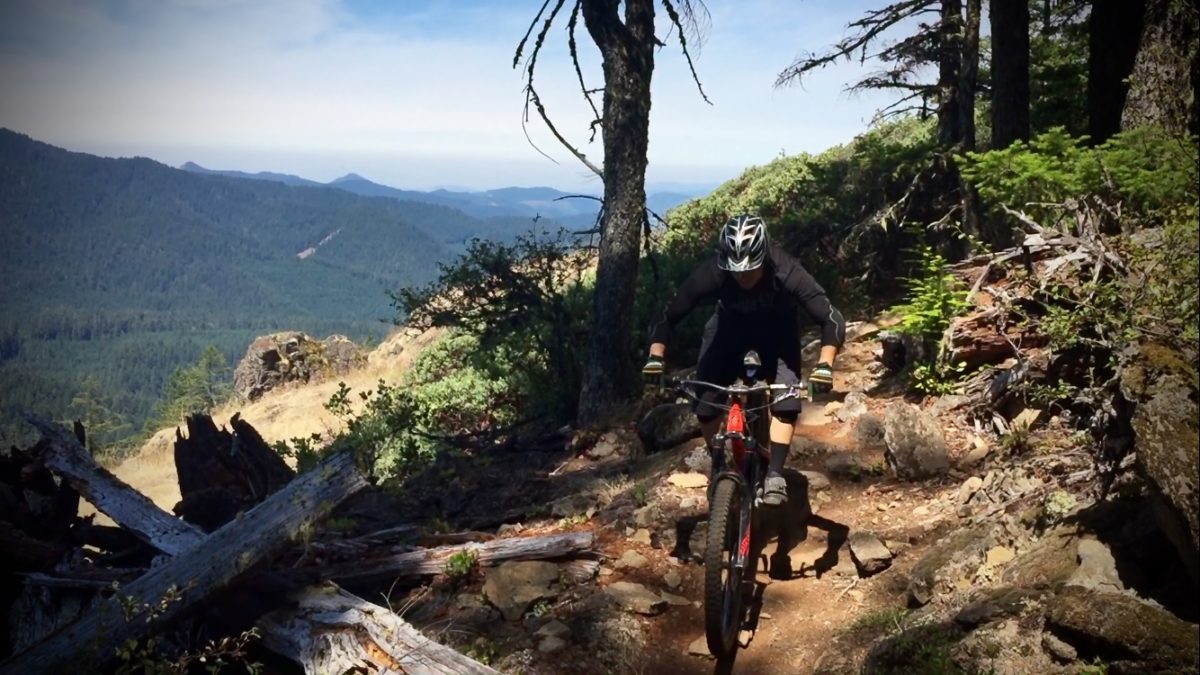 In Oakridge, OR there’s one place to get a drink, one place to get a burger, a Best Western, and thousands of feet of descending through lush, Cascadian forest on advanced singletrack reserved only for the brave of heart and a fresh set of resins. Indeed, what the town of Oakridge lacks in fluff many mountain bikers seek in a destination, it more than makes up for in steep and deep singletrack wonder.

Like many Northwest trail systems, mountain biking in Oakridge, OR owes much of its success to previous logging efforts that, since the early 90s, have mostly ceased, leaving the sleepy town of 3,200 people devoid of the panache that decorates more popular mountain bike destinations, like its neighbor to the north, Bend, OR. However, beset on all sides by the Willamette National Forest, deep in Oregon’s southern Cascade Range, Oakridge has been on the slow rebound, rebranding itself as an outdoor recreation hotspot–most notably, a mountain biking hotspot.

Aside from the trails themselves, Oakridge’s premier mountain biking tourism company, Oregon Adventures, has been at the core for sometime now, helping shape the small town’s mountain biking scene. Among many shuttle and tour options Oregon Adventures offers is a one-day shuttlefest of over 17,000 feet of descending on 45 miles of singletrack divided among six different routes, known as the 17K Vert in a Day.

Now, before you XCers start rolling your eyes and turning a nose up at the word “shuttle,” or you DHers begin salivating through your full face and wiping down the dual crowns, I assure you this 17,000 feet does not come without a price. In fact, 90% of the nearly 4,000 feet of total climbing came at us full-force before lunchtime, leaving us pondering whether we’d bit off more than we could chew, as we would literally bite off more than we could chew at Stewart’s 58 Drive-In. 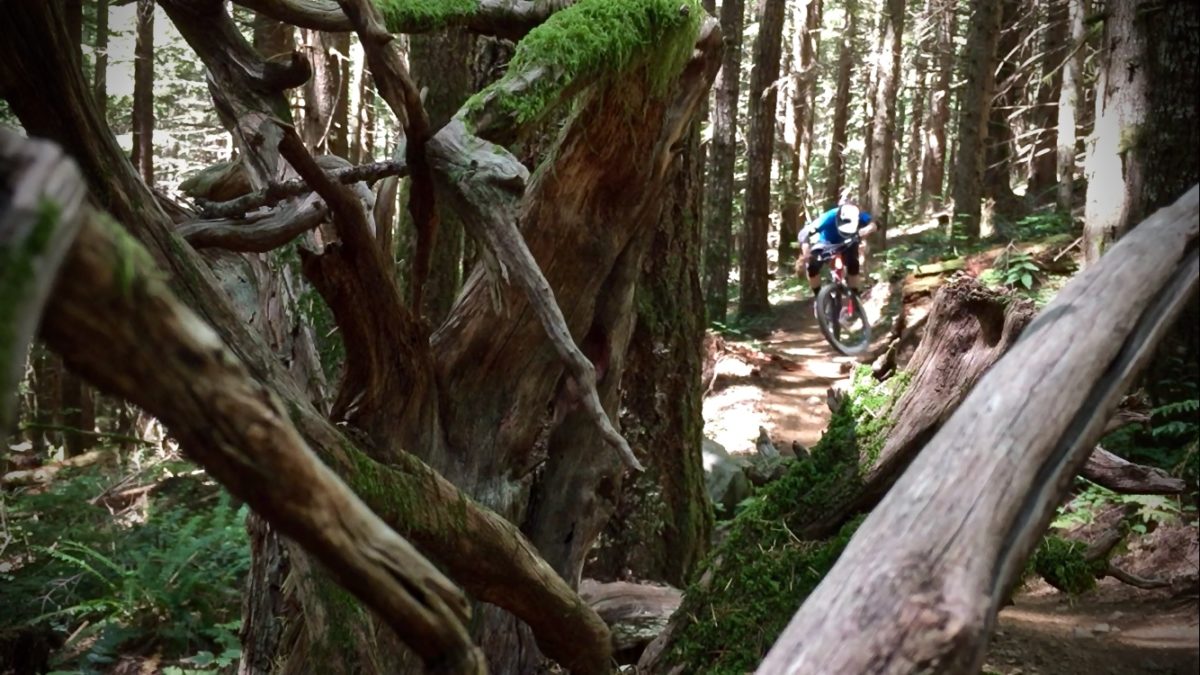 In order, here’s what it was like dropping 17,000 feet in one day on Oregon’s finest:

Dubbed as Oregon’s crown jewel, the Alpine Trail is the trail of choice among most riders who visit Oakridge. As the longest descending trail in Oakridge, coupled with the most climbing of the selected for the 17K, Alpine’s 14 miles feels more like 30, yet none of the climbs are terribly steep or sustained.

Alpine begins with an earnest one-mile grunt before opening up to the picturesque Sourgrass Meadow and marks the beginning of many high-speed descents. The initial 800-foot loss swoops two miles through loamy singletrack peppered with rock and root, followed by another climb which then gives way to a Speeder Bike descent through “Jedi Forest.” Short climbs and more ripping descents punctuated by grand views from hillside singletrack continue until about mile 6.5, whereafter you’ll lose the final 2,800 feet over the last 7.5 miles with little to no climbing. At the right time of year, you could be greeted by wild blackberries at trail’s end. Nom-nom-nom… 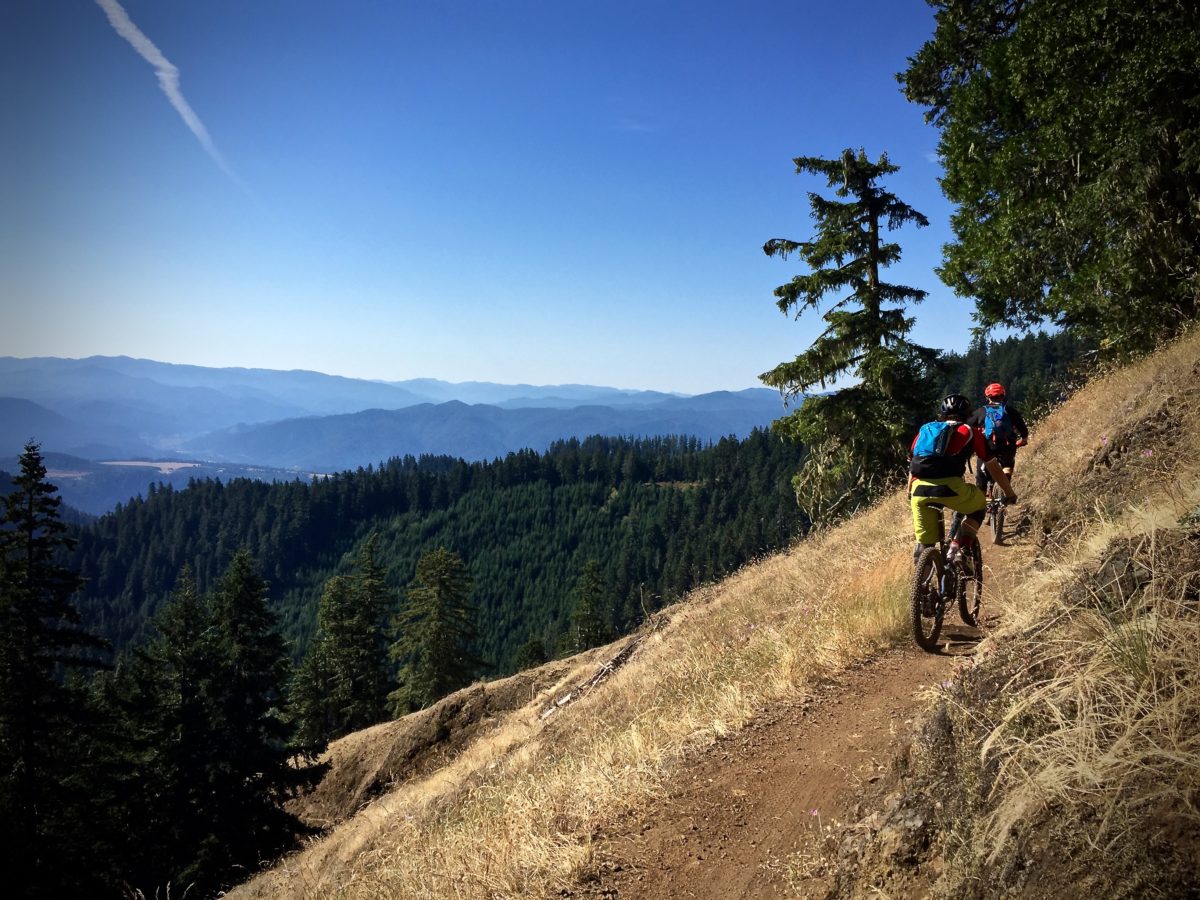 In true Oakridge fashion, enjoy a ½ mile climb before coursing off (do not miss the right-hand turn) through rich forest leading up to the next 5.5 miles of fast, flowy singletrack. While not the steepest trail billed for the 17K, Lawler somehow felt like the fastest and rowdiest. Loose rock, super-tight singletrack, and hairpin switchbacks require surgical precision and laser beam focus lest you’re down for some bloodletting therapy, as a few in our group apparently were.

At about mile 6.5, Lawler peters out onto service road for the final three miles. Although a bit of a let down, this will soon change, as we discovered signs of trail work and rumors the new singletrack would soon complete the entire descent to the creek. 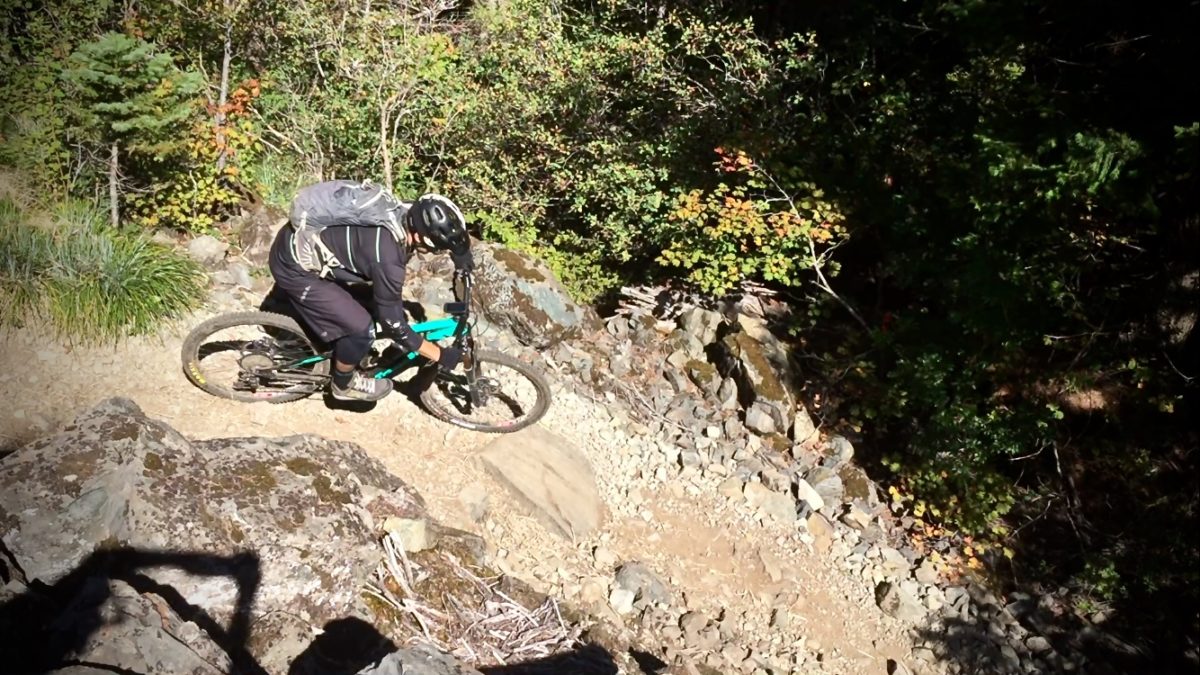 Of the nearly eight miles logged on Hardesty, two are paid for grinding gravel followed by a set of steep switchbacks to the top of the ridge, but it’s all more than worth it! Hardesty is so similar to Lawler in terms of how freaky fast and rambunctious it is, I often confuse one for the other. Like Lawler, Hardesty demands your full attention as you scream through its tight treachery and hairpin turns, forcing you to the brink of control.

Flat Creek (formally Dead Mountain) is an unfortunate title for this ripping six-mile descent. It is anything but flat or dead! With 90% of the day’s climbing under our belt, upper Flat Creek’s cue-ball-smooth surface, high-banking berms, and holy rollers were the perfect combination to ingest while we were yet digesting our tasty gut bombs from Stewart’s 58. 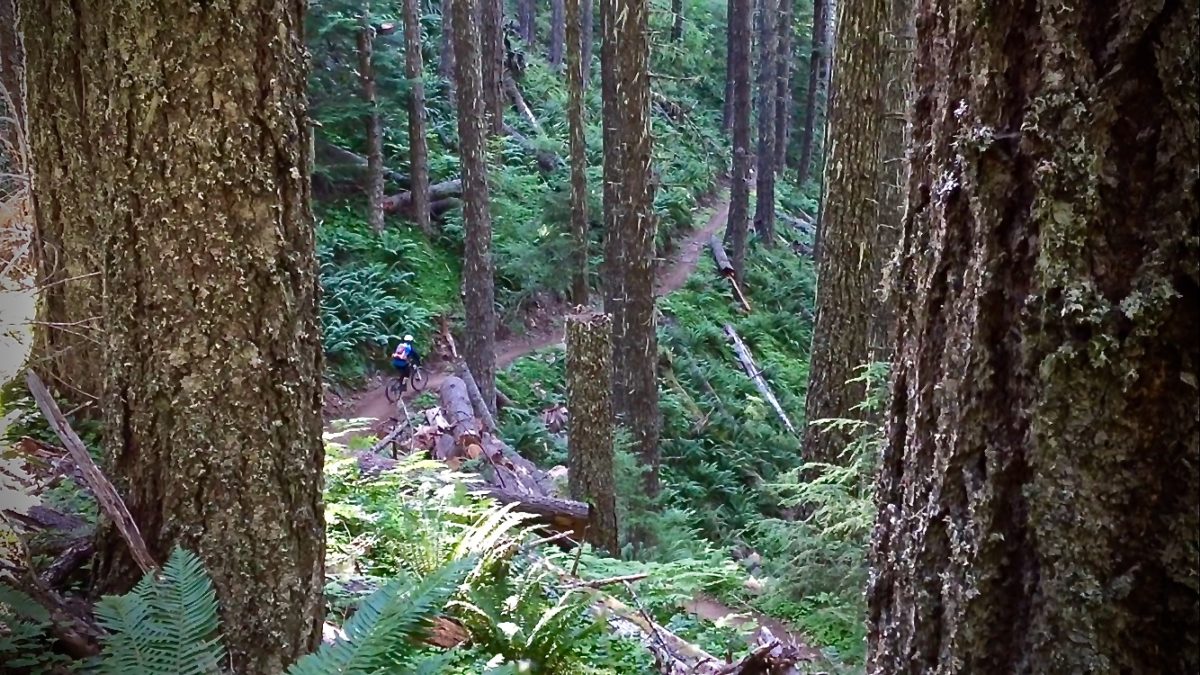 Another high-speed, three-mile descent, Aubrey gently rolls the mountainside for the first 0.7 miles, giving the brakes a brake before the bottom gives out over the next two miles for a 1,000-foot descent. Loose, blind corners tested traction and our mettle, but we plowed on until, finally, a soft corner washed out, serving me up an early dessert of dirtpie, a la faceplate (it was only a matter of time).

Your odometer reads 41 miles, your quads are squealing in protest, your eyeballs feel more like pinballs, and your brakes are baked, but on the 17K’s last trail, Larison Rock, is not the time to let up. At only 3.4 miles of downhill, what Larison lacks in length it makes up for in steep, rowdy descending as you plummet through shaded forest, down exposed mountainside, and over surfaces both smooth and technical, with corners so blind that a split-second of inattentiveness sends you off the hillside. Finish strong, young Padawan! 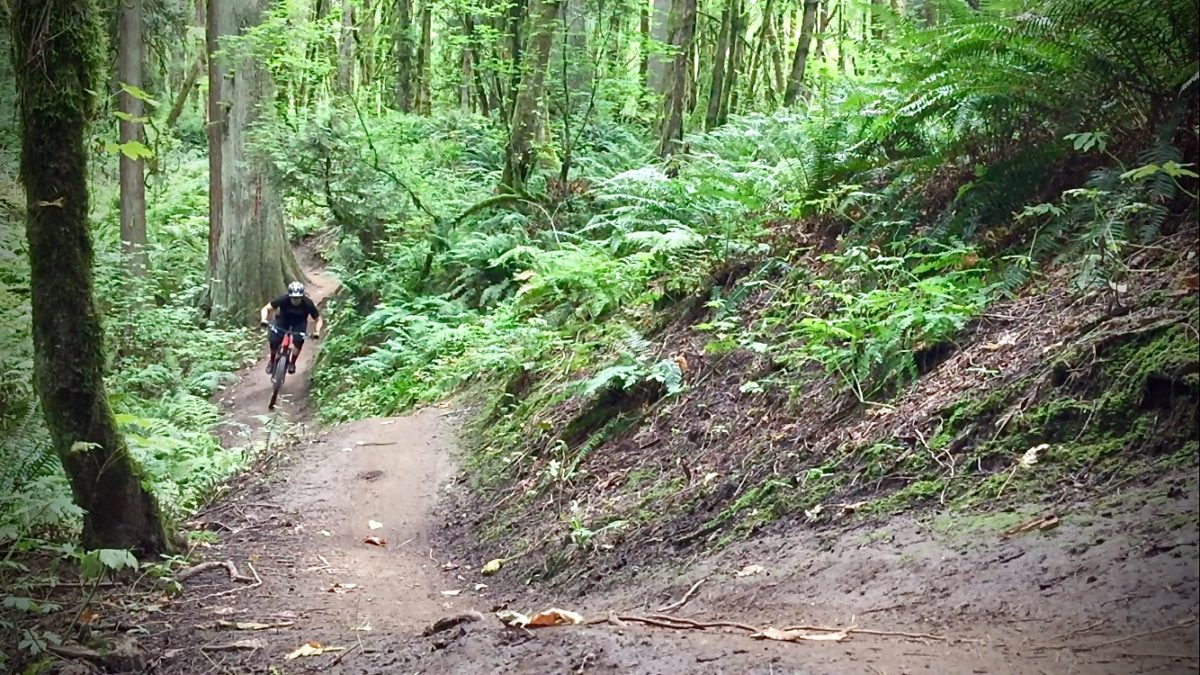 Know Before You Go

Despite all of this hubbub of shuttle-serviced plunging of epic proportions, you would be wise to leave the DH sleds behind, as the 17K comes at a fee of 4K feet of climbing over the course of the day. Also noteworthy (although at this point it seems like pissing in the ocean), as of this year with recent trail developments to the top of Dead Mountain, 17Kers will enjoy an additional 1,000 feet of downhill, rounding out the total day’s descent to 18,000 feet.

The tour price includes shuttles to all six trails, lunch, snacks along the way, a local guide, a handsome T-shirt, and pleasantly-awkward banter from Ben, the driver (as long as you get Ben). All you need to bring is a bike and a smile. At $189 a pop, I’d say that’s a steal!

The 17K Vert in a Day is held once a month from June through October so, while you may have missed your chance this year, skip the Bend trip and throw this event on the top of the list for next year or, round up some riders and call Oregon Adventures to customize a tour of your own (see the OA website for details on custom tours). 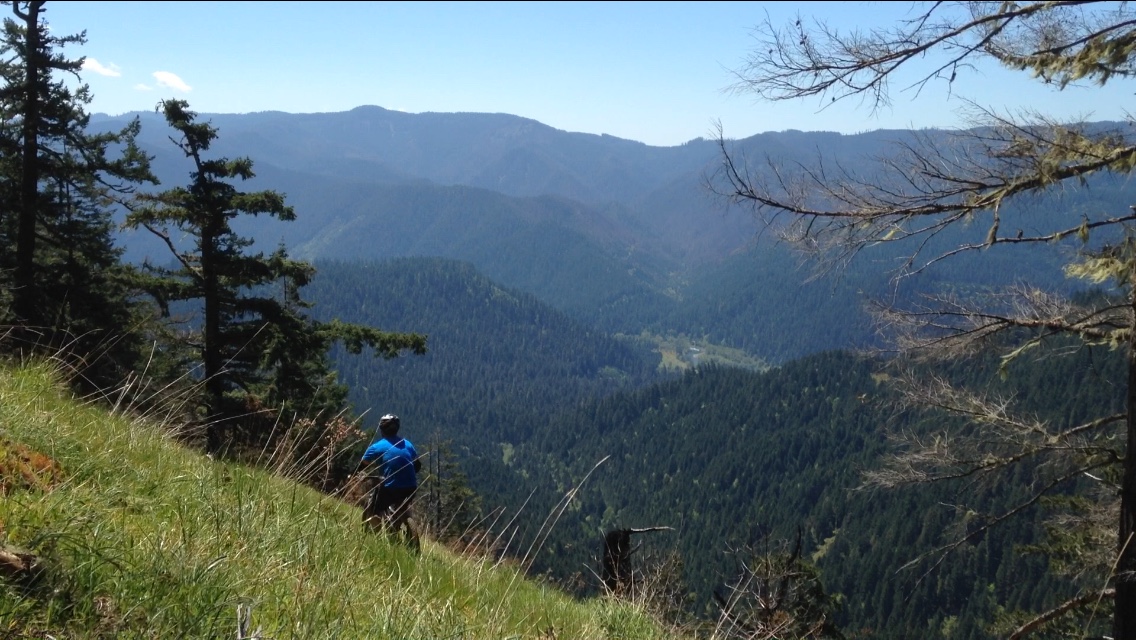 Gear
The We Are One Arrival Is a Mid-Travel Bike With...
Gear
Enduro Deals & Early July 4th Sales
Gear
An Inverted Dropper from Enve, Revel DJ Bike, and Improved...
Community
A Chain of Inspiration has Grown Mountain Biking in the...
Subscribe
Login
Please login to comment
4 Comments
Most Voted
Newest Oldest
Inline Feedbacks
View all comments

Wow, definitely a ride that must go on the bucket list though I don’t know when I might ever get back to OR. I worked for Champion Paper in 1985 on the Mapleton District (inland from Florence). If most summers in OR are as hot and humid as that summer was, I think I would only consider doing the 17K Vert in September or October. Great write up Chris … Ride on !!!!!!!!!!!!

Anybody know the quickest flight from NC to Oregon? I am going!!! Whoa!

Not going to say that Oregon Adventures is not your best all-around choice for your shuttle trail needs in this area alone really, but, you might check out “Cogwild Bike Tours” as well for all of these trails and more. They have the same options as well as a more professional and all-around cleaner shuttle experience really. You may find out more by contacting “Willamette Mountain Mercantile Bike Shop” located in the town of Oakridge at (541) 782-1800 or call “Cogwild Shuttle Tours” in Bend Oregon as this is the Oakridge Division we are talking about for these trails listed above, (541) 385-7002