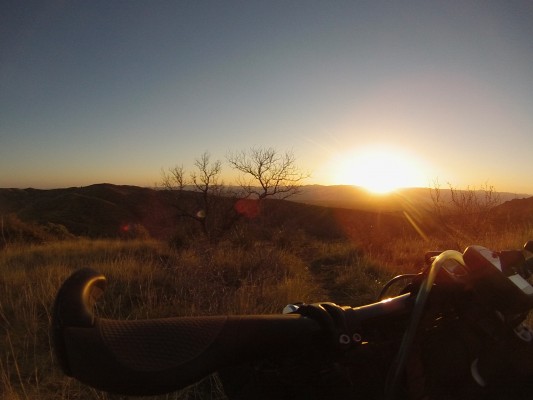 Despite all the bad luck with my fork and tire, the desert was still a beautiful place.

After the successful tire surgery and a fun night ride, I grabbed some Z’s at the La Selvilla Picnic Area.

My sleep was interrupted by Big Dave, who zoomed right by my head. We chatted as I woke up and he said he camped out near the tunnel under the highway and had a lackluster sleep. I could only imagine. Dave filled up on water and was on his way out before I knew it.

I started to gather my things slowly and filled up on water at the spigot. Max Morris came riding up with lots of energy. He asked if many 750-mile riders were ahead of us. I told him yes as I thought there were, but over the next few days I realized I had been mistaking some 750 riders with 300 riders.

I finally got going around 6:30am for Tucson. The Hope Camp section was a great warm-up for the day, not too difficult and road riding is always welcome in a race like this. I passed the Rincon Market where I knew a few people were getting resupplied on food and I would have done the same if not for my fork.

I arrived at Broadway Cycles at 9:00am and asked if they had a rigid fork laying around for a 29er. They did not, but they did have a Fox Float 100mm 29er for sale. They suggested I go to Arizona Cyclist where I’d find more of a selection. I started to pedal that way, but I kept feeling like I was wasting valuable time–I wanted to get back on the trail. So I turned around and decided to continue to ride on the broken fork the rest of the way…. until my conscious brought me back to Broadway Cycles. I wanted to finish so bad, so I did what needed to be done. I bought the Fox Float fork. 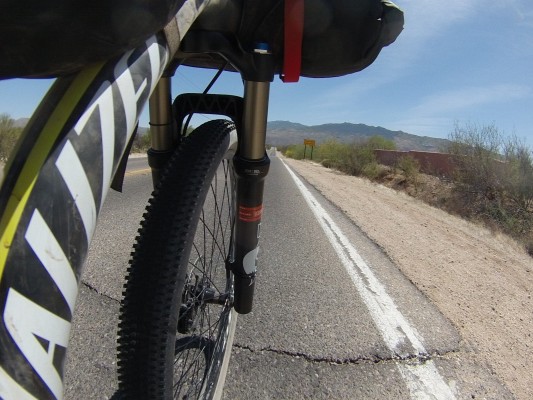 My new fork…I was in business!

Luckily my credit card was on me as I did not have that kind of money after all of my pre-race expenditures. It took about an hour for the mechanic to put the fork on. I was in business and spirits were super high!

I left the shop and noticed a dollar store so I stopped in to find a new needle. I grabbed some beef jerky and downed a Sprite in the check-out line. On the way out of town I passed a McDonald’s and it drew me in like a magnet. I ordered a Big Mac, took it out of the wrapper and ate it while I pedaled east up Broadway Blvd toward the route. Everything had worked out perfectly, minus spending so much money. But who cares? I was back on a fully-functional bike! 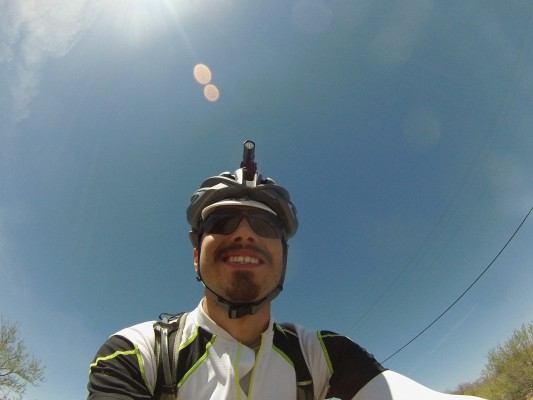 Spirits were super high on my way back to the trail from Tucson.

On my way up Reddington Road temperatures were rising and the grade was steep. It was painful so I just started to walk my bike which was better than not moving at all. On hot days like this the wind was truly a life saver. The wind didn’t really pick up until I reached the summit of the road but boy did it feel great.

I wasn’t sure if I would ever see Dave, Max, or Luke again. My two hour detour really set me back, but all I could do was keep pushing. After some technical jeep roads and overshooting my turn, I made it back to the Arizona Trail.

The temperature continued to rise, and the riding was not that easy. I crossed Reddington Road again and took cover under a small tree for some shade. From what I can remember, I had never been in heat like this since growing up in Chicago–and I can remember some pretty hot summers.

After a short break I felt refreshed and continued on. I passed the lake which was currently a toilet for cows. I would have never taken water from it, even if I needed it. I finally made my way to the epic hike-a-bike section and I saw two bikers hiking away which was a welcoming site to see.

I started hiking my bike and next to a bush, I heard a rattlesnake. I couldn’t see the snake but I sure could hear it. I talked to the snake, “I’m only passing through, sorry that I upset you.” That scared the crap out of me and I scampered away from the bush quickly.

I finally reached the top of the hike-a-bike and caught up to the two other racers. I didn’t catch their names but remember one of them saying “I’m not in my mojo.” Just before Mount Lemmon Highway I reached a trail junction. I was told there was water up the drainage of the junction called Molino Watering Hole. I did not need much water but I walked up and saw Blake and a dude from Tennessee. Blake started up Prison Camp as I chatted this guy’s ear off while I filled up my two empty bottles. It was good to see so many racers again! 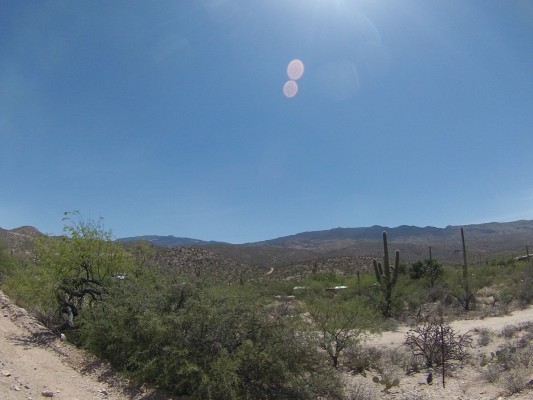 The saguaro-dotted vistas were amazing.

Blake and I discussed when we thought the store at the summit, the Summerhaven Market, would close. It was late afternoon and the sun was setting. Blake overheard at the Rincon Market that the store was open until 9:00pm, so our goal was to get up there by then which seemed manageable.

The sun eventually set on our climb, forcing us to turn our lights on. It got cold and I was officially starving. We finally reached a downhill section and eventually the junction of Oracle Ridge and Summerhaven. I cruised down the road to see if the market was open–and it was not. Temporarily discouraged, I climbed back up and noticed a restaurant, The Sawmill Run. The lights were on and there were 5 bikes parked out front. Inside I found Max, Ross, Luke, Casey, and Dave. They convinced the restaurant to stay open for us when they saw our lights in the distance climbing up the road (thanks guys.) That right there was luck which I knew would come into play at some point in the race.

We reminisced about the trail while I ate a huge cheese burger and fries. It was cold up at 8,000 feet so I layered up and prepared for the famous Oracle Ridge hike-a-bike. After cleaning up a bit and using the bathroom, Blake and I finally left the Sawmill and started up the ridge. I ended up losing Blake and tried to catch some lights in the distance. Steep climb after steep climb, I kept pushing my bike at a relatively fast pace. It was about 11:00pm when I caught up to the lights–Luke and Casey from the restaurant. I rode/walked with them for a good portion of the night chatting about life. We found a flat clearing full of cow pies and called it a night around 1:00am.

Wowsers. We don’t all get to do epic excursions like that. Thanks for the report.

You guys are beasts!!

The Mt Lemon climb is usually pretty popular for the road bikes (and the motorcycles ;))

Dude, even though it was pavement, it was a brutal climb. It was a weekend so their were lots of cars. It was nice to be in the cold again. Oh and what a view of Tucson. I would imagine if you want to escape the heat that’s where you would go.

Stinks that you had to break down and buy a new fork. Were you able to repair your old one?