For a good 20 mile ride, ride out of the parking lot onto the trail along the lake, Hickory Trail. In a short distance Finger Rock Trail go to the right and will take you up to Finger Rock, a neat place to look around for a few or practice some scary riding. From there continue up Finger Rock and take a right on Athens Trail. Ride it all the way, straight through to Sells Park. Cross the little dam at the pond and catch Rockhouse Trail to White Oak Connector, then left on Athens Trail (you were here once) ride back to Finger Rock Trail and back to the parking lot. As you ride across the road from your car you will dive into the woods and start a little bit of a climb on Thunderbunny Trail. When it comes out at the campground go right on blacktop, at next intersection turn right the left at the next intersection (main road) immediate right a next road and then immediate left into wide gravel area. Note the trail (Sundow Trail) goes into the woods on your right. Follow this trail to the dam at Dow Lake, near Rt.33. Note: be carefull on Sundown Trail. There are horse trails the criss cross this trail and it can be easy to get on the wrong trail if you don't look at the trail markers. When you get to the dam ride across the dam and follow Hickory trail along the lake all the way back to the vehicle. We came up with 19.7 miles when we rode the same route. Thunderbunny is likely the best flowing singletrack I've ridden. Sundown is also great. Check Athens Bike Clubs website for a map of the Sells Park / Strouds Run trails. The map does not show all of Sundown Trail. It does go all the way to the dam and is a blast.

June 2022 - Sundown trail is very narrow and not well maintained. The brush needs to be trimmed back from the trail and there were a number of large trees across the trail. I am an intermediate trail rider is reasonably good fitness and had to walk a fair amount. It’s a tough ride.

First added by Outdoornut on Oct 6, 2009. Last updated Jul 5, 2022. → add an update
Before you go
This trail information is user-generated. Help improve this information by suggesting a correction.
Getting there
Route to Trailhead with Google Maps
Located just east of Athens Ohio I find it best to drive into Strouds Run and park near the north end of Dow Lake. I believe this would be the best location to start from.
System trails (1)
Featured in
I Rode It!   Add to another list 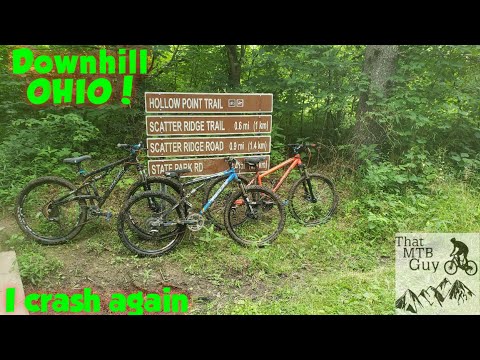