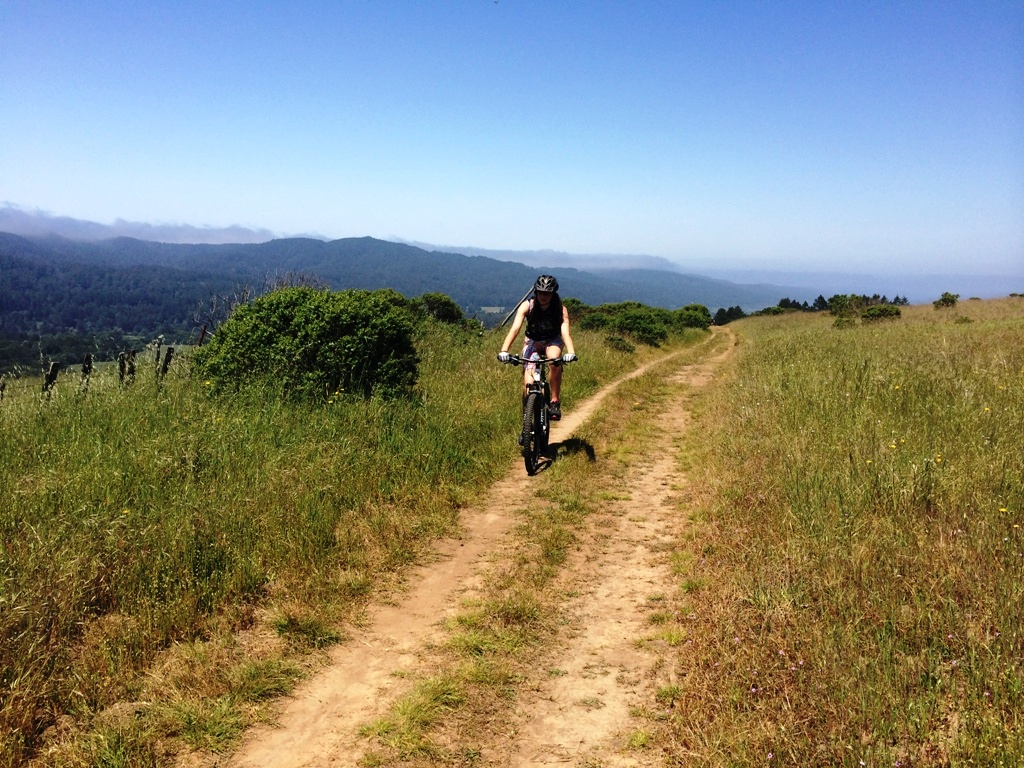 When they told me the new all-women’s mountain bike ride would be called “The Jane Fondo,” I snorted a little bit of whatever I was drinking at the time. Would the famous actress sue the Marin County Bicycle Coalition ? It seemed unlikely. 50 ladies, escorted by pro cyclocross racer and hometown heroine Rachel Lloyd, ably assisted by Robin Farina (a pro-roadie from Nevada City who loves her some dirt), set out across the Marin landscape in waves. Three routes of varying epicness were available–13.5, 22, or 28 miles. This writer/rider was harassed and cajoled into the 28-mile, 4,300-foot climb route with subtle threats to my womanhood–sentences containing words like “pansy” and “wimp.” For me, though, the words “burgers,” “beer,” and “swag” were far more influential.

While mostly fire roads, these were some of the best views and prettiest landscapes Marin has to offer. We climbed the slopes of Mt. Tamalpais through redwood forests that trapped fog and made it rain, though the day was hot and dry, around Lake Lagunitas replete with turtles sunbathing on logs, around the snooty-pants golf course (that somehow lets us through their property, so maybe I should take back the “snooty” comment), and up Pine Mountain. The Pine Mountain fire road is the route of the famous Appetite Seminar–a Marin tradition since 1975, where 500-700 riders prepare for the Thanksgiving meal by completing a 20-mile circuit with 4,000+ feet of climbing, drink a free beer in town at the end, and are back where they need to be by 11am.

Skill levels ran the gamut from racer ladies of the North Bay literally lapping some of us, to those walking the switchbacks. But from mad-dabber to podium-grabber the camaradaried was palpable.  I usually ride with men, which has its advantages. They fix my flats, though I am fully capable, and they get to the business of riding–not a lot of chatter. But, they also ditch me, have occasional testosterone fits, and speak only of gear. It was refreshing to hear the trill of women’s laughter, conversation, and encouragement.

Upon our return to Fairfax, we were greeted by smiling dirty girl faces, and the men who supported us by grilling burgers, vegetables, and shrimp. And… they had beer on ice. Though I am such a lightweight that one is more than enough, that one is heaven after 28 miles.

Dude Girl mountain bike wear for ladies had a booth, and Liv–Giant Bicycles’ women’s-specific brand–was a strong presence in purple. With more women than ever joining the mountain bike community, and with help from savvy ladies groups like Liv and Dude Girl, next year’s Jane Fondo promises to be a veritable chick-palooza.