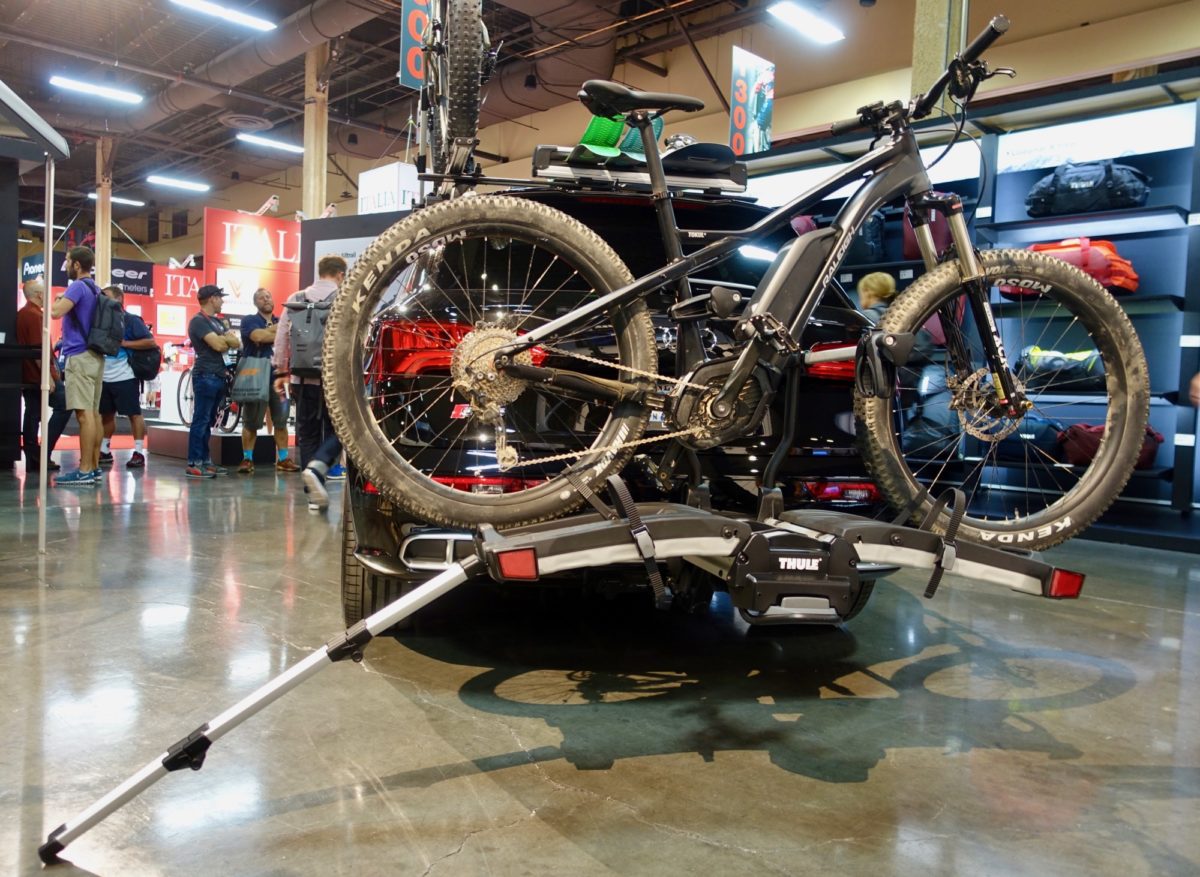 When I first hefted an ebike into the air and was stunned by the weight, my question was, “how do you haul one of these to the trail?” While some bike shop employees assured me that you could haul an ebike with a standard tray-style hitch rack (and I did haul one on my Kuat NV 2.0), many racks list a bike weight limit of around 35-40lbs. With most ebikes tipping the scales around 40-50lbs, technically you’re over the limit of most racks. And two ebikes? Forget about it.

While I’m all for bending the rules a bit, loading a $5,000+ ebike onto a rack that’s not designed to carry it seems like a bad idea. You could argue that riding an ebike is a bad idea to begin with, but that’s neither here nor there. If you do decide to ride one of these behemoths on a moto-legal trail, Thule has introduced a rack designed to safely carry your speed machine to and from the trailhead: the new EasyFold XT transport rack. 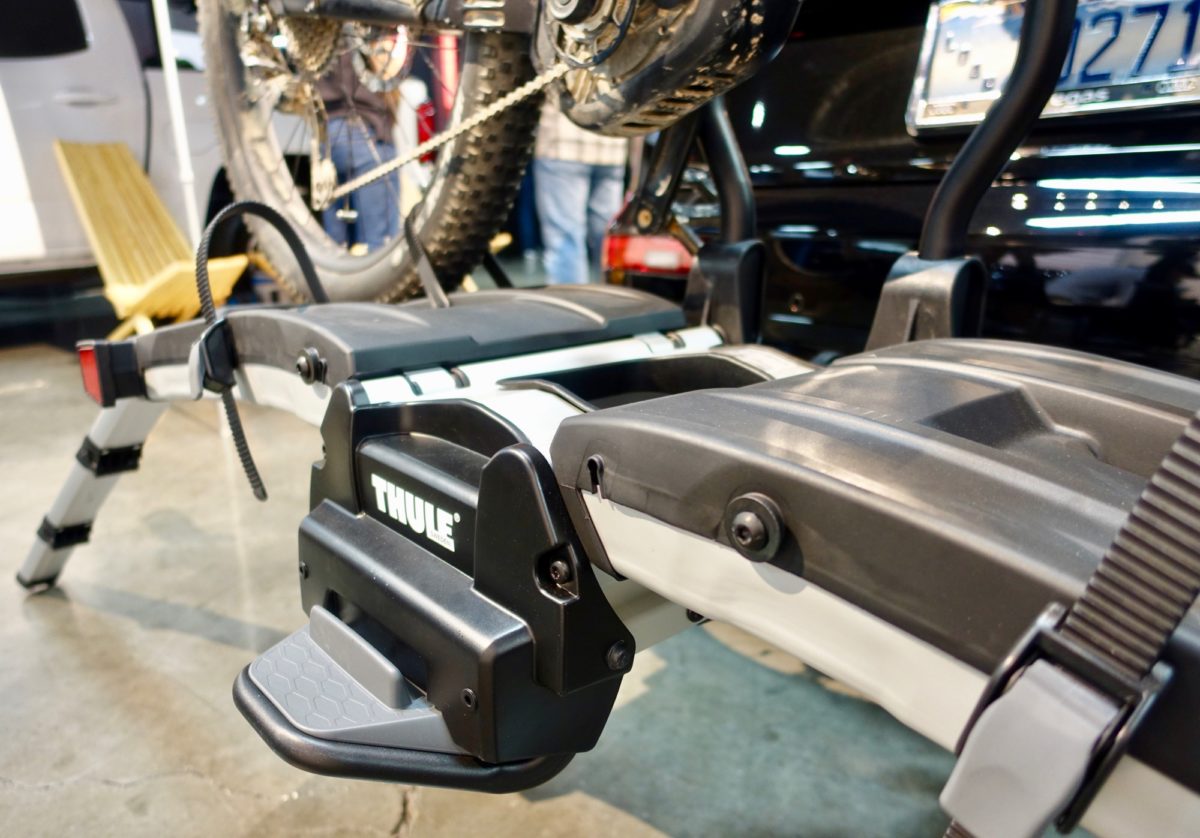 While Thule notes that the EasyFold is compatible with all types of bikes (including road, mountain, and fat), with a 66-pound weight limit per bike, and with an ebike mounted on the rack at Thule’s Interbike booth, the EasyFold is truly designed for heavyweight motorized bicycles.

The EasyFold name comes from the design, which allows the owner to fold the rack in half and quickly remove it from the car, reducing its size to “no bigger than a normal suitcase,” according to Thule.

But how do you go about loading a 50-pound ebike onto an elevated tray rack, especially if you have a physical limitation that predisposes you to using an ebike in the first place? Here, Thule took cues from motorcycle hitch racks, by including a ramp to roll the ebike up so that it does not need to be lifted. The ramp then collapses down and is stored beneath the rack when not in use. 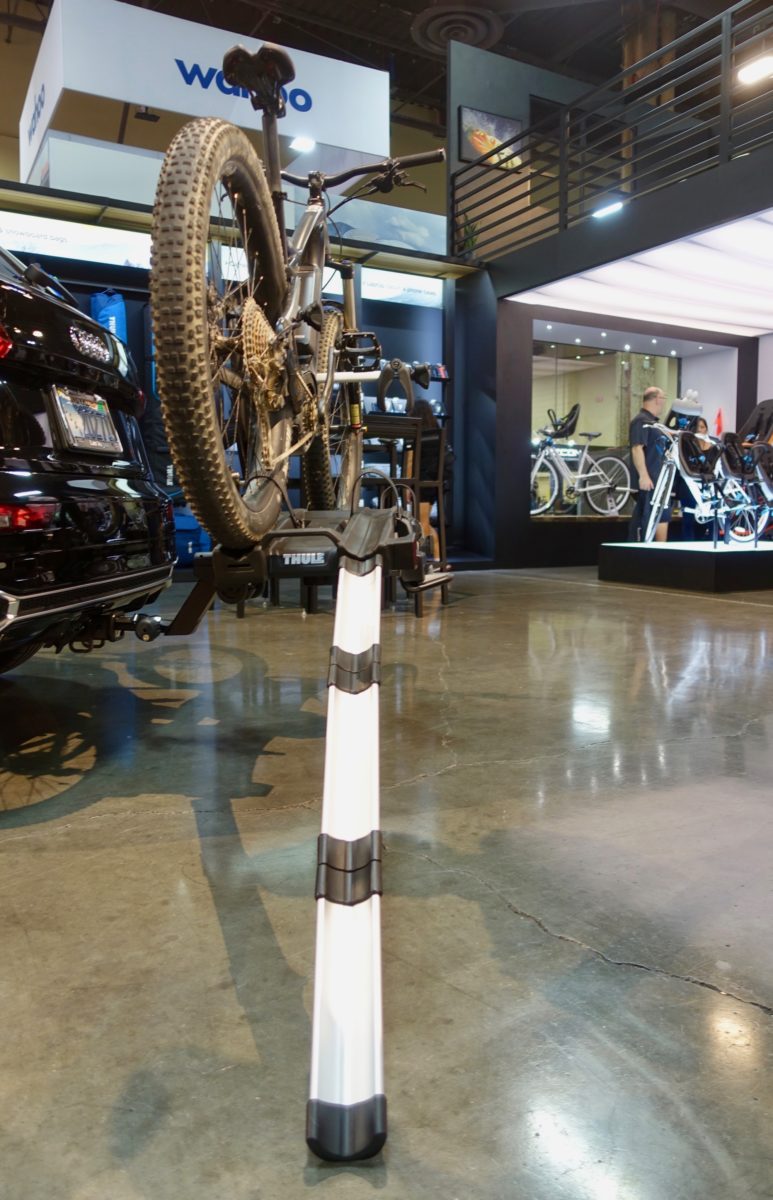 Gear
Best Mountain Bike Gifts Under $50
Gear
13 Reliable, High-Quality Mountain Bike Products Designed to Last
Progression
How to Stay Strong in the Off-Season, Even if You're...
Gear
Why are Good Rain Jackets so Expensive? We had to...
Subscribe
Login
Please login to comment
1 Comment
Most Voted
Newest Oldest
Inline Feedbacks
View all comments

yes Ebike it is a whole different thing , i have an ebike after much thought and worry about my physical changes, I got one early this year. It’s a different kind of riding. Sure, it’s fun and fast. It takes about 1/5th the effort going uphill and going down — It is so heavy and the traction is ok on a 29 plus but not a nimble, not as maneuverable. But after looking on the ebike reviewer comments – I completely agree – for certain trails or riding styles – it gets me to go out more.
I have a xt rack but not the easyfold and it’s a trick to get 50# on but not too bad. I prefer to load it into the back of my Honda Element and not a rack. In fact, the honda was purchased for that as one of the major reasons — I did not want the bike on the rack if there is a safer and easier way to transport it.
The other bikes are 25# or so and they’re are so easy to get on the rack. For example,
I love the Joaquin Miller trail nearby, but the ebike – I don’t think i could make the turns or ups and downs without the momentum of the bike and the heavy feel slipping. In general, I like the uphill but I miss the rest.