I hooked up with “The Gerries” at China Camp State Park on a warm, late fall morning, and the eight of us suited up for a front-side loop through bay and oak woodlands, views of the remoter reaches of San Francisco Bay punctuating our route. “Gerries” refers to “Geriatrics,” and I want it to be clear this is their name for them, not mine. These guys ride religiously every Saturday, and a smaller handful throw in Tuesdays and Thursdays for good measure. They are mostly between the ages of 63 and 72, with two outliers at either end—Bill is a babe in the woods at 53, and Bob, or “The Bobfather,” is 82.

“It was about 1996 after I stopped playing soccer for 20 or so years. I moped around for six months, and my sons bought me a crappy Costco bike, which I used only occasionally until I met a friend who teased me into getting a better bike.”

Bob was a very active backcountry backpacker, snow camper, and early supporter of the Sierra Club. In 1997, he met Lynn, who joined his Sierra Club snow camping TransSierra trip that year.

“Our first ride together was Mt. Diablo on an illegal singletrack–we turned back because the climb was too tough, but went on to start riding Rockville. I had a Stumpjumper by this time.”

The last time Bob raced the Downieville Cross Country, he was a spry 74. And this is no small feat. With 29 miles, 4,413 feet of climbing, 5,692 feet of descending, and half of the course doubling as the Downieville Downhill, young, fit persons are set to quivering at the thought. Bob finished the course smiling on more than one occasion. I had the honor of riding the chairlift with Bob at Northstar when he was 75. On the platform waiting for my bike to arrive, I overheard two young punks nearby.

“Let’s get a move on so we don’t get stuck behind Father Time over here…” snicker snicker snicker. I was quite tickled when “Father Time” ditched them post haste, and maybe kicked a few rocks in their faces in his wake. I can’t remember that part for sure, but it adds flair, so it’s staying.

About three years ago, Bob was having serious trouble with his ankle–enough that he couldn’t walk and opted for ankle replacement surgery. It didn’t go well. He had another one. The second was a success, and he was able to get back on his feet, and on the pedals. However, by this time, at 80, he was having trouble keeping up with his crew.

“I was holding everyone back so much, it just wasn’t working. The e-bike lets me keep up, lets me keep coming out here.”

A gaggle of turkeys waddled across the trail behind him as he showed me the “eco,” “touring,” and “turbo” options on the bars of the Lapierre. Bob set it on turbo, pointed me to the steepest, loosest, un-ridable-est piece of shit fire road in a 50-mile radius and said, “Go ride that!” I don’t believe that I have ever before giggled while ascending a nearly inverted plane.

Though I’m still pretty leery of the EPO (electric power option), I have to say it was pretty darned cool. Knowing that what I think about it won’t change anything, I guess I’m happy that by the time I’m 80, electric assist bikes should weigh significantly less than Bob’s current 50 pounder. And by that time, maybe the angst will have dissipated. Or the electric part will be indiscernible, and no one will know I’m packing heat.

One of the last times I saw the Bobfather race was in 2010 at the Lemurian near Lake Shasta in Northern California. In fact, several of the Gerries were racing that weekend, and we met them at Denny’s for pre-event breakfast. We parked and headed for the front door when the Bobfather rolled his jeep into the spot closest to the entrance. The car bristled with bad-ass bikes, and old men in chest protectors, elbow/knee pads, and downhill jerseys poured out of the car, along with some kind of thumping rap music. We watched in bemused fascination at this spectacle unfolding in front of us, and then came the topper. Without a trace of irony, Bob hung the blue and white “Handicapped” tag from his rearview mirror, and shuffled into the diner. 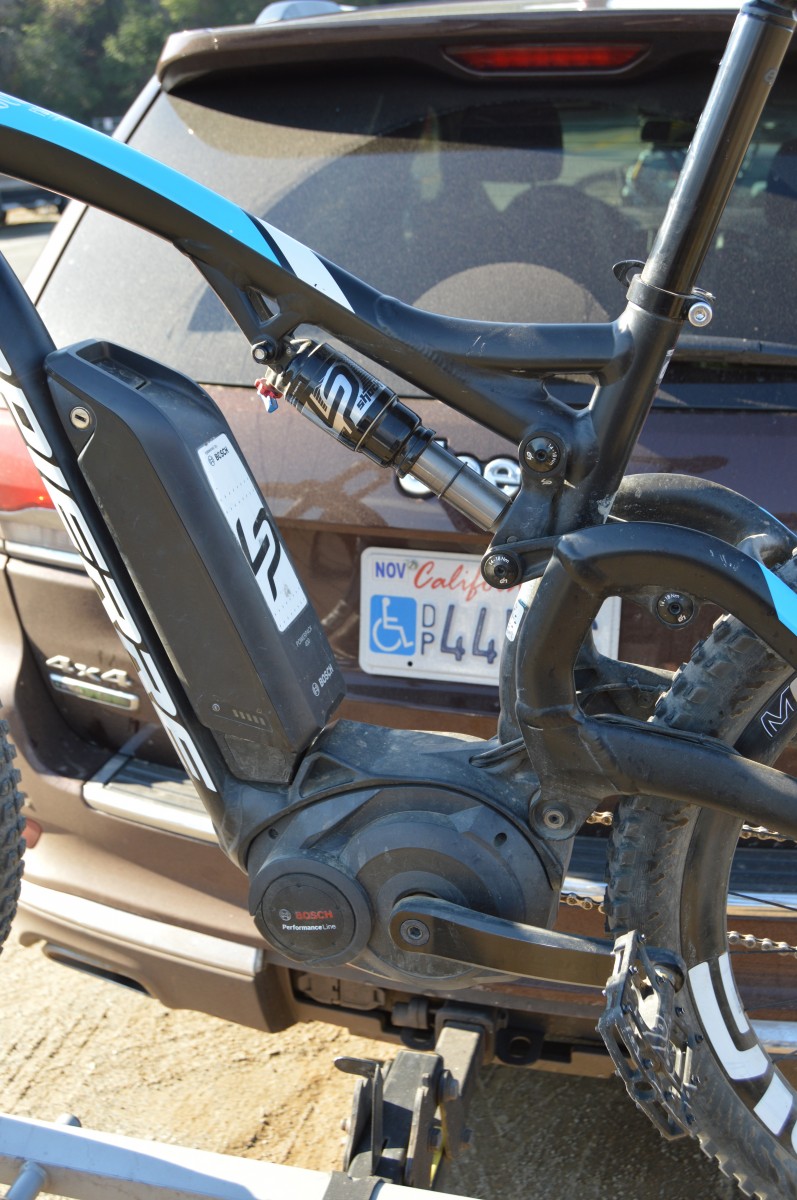 On the way up the hill, Fireroad Ron, 72, relayed that he had recently stayed at a Paris hospital for six days when his heart went haywire while visiting. “Yeah, they turned my heart off, then back on again, and I’m good as new! Some kind of hard shutdown/reboot and I walked eight miles the very next day.” Fireroad was having no ticker troubles on this day, and I could hardly keep him off my wheel. Lynn, 76, had a hip replaced about five years ago, and while one marvels at the skill required to stay upright while riding that damned slow on the uphill, he will shame riders half his age on the descent. After any ride, the Gerries can be found at La Toscana in San Rafael, usually with their own room (cause the group’s so big, not because of behavioral issues…).

The support these guys give each other, whether in the form of encouragement, merciless razzing, or just plain showing up every week, is a thing to seek after. And these patriarchs of dirt are somewhat famous, not only at China Camp, but at other popular Bay Area mountain bike destinations. A full quarter of the folks we ran into knew at least one of them, and referenced their shreditude. Let us all age in this way–among friends, in the woods, on the dirt.

Advocacy
The Kids are All Fast: How Aging Mountain Bikers can...
Culture
8 Pieces of MTB Advice I Wish I Could Give...
Training
How to Stay Strong on Your Mountain Bike as You...
Mountain Bike Podcast
Podcast: MTB As We Age Plus What's Grinding Our Gears...

Love it! Great article. They look like a great troop to ride with. Bob was also a former Naval Officer!

This is awesome and exactly why I’m in favor of e-bikes.