Okay, so maybe shaving my legs had nothing to do with it, but as a road bike racer, I learned a lot about how to be an athlete, how to find energy crumbs when I could hardly breathe and was seeing colors that are not part of the rainbow. Oh, and why I should train hard every night after work so that my teammates could win the sprint.

That’s right, I raced road for roughly eight years and never once stood on the podium, and I learned a lot of important traits that help me better ride dirt today. I want to share a few of those attributes, both with the hope of opening some acute perspectives toward roadies and to celebrate the universal stoke of balancing on two wheels. Most of these apply to XC and cyclocross racing as well, and many of them could apply to anyone who races an endurance team sport, but I will speak for myself herein.

I bought my first road racing bike shortly after moving from my hometown of Priest Lake, Idaho to Eugene, Oregon. I was about 20 years old (I don’t recall numbers so well), working full time, and in desperate need of a reason to quit smoking and drinking too much. My mountain bike was stolen from work and I didn’t know where any trails were, so I bought a road bike that I could conveniently pedal from my apartment door. Soon after, I entered a time trial, having no idea what it was, and pinned a number to my cotton t-shirt to take second-to-last place. I wasn’t immediately hooked on racing, but I was hooked on not smoking.

I later moved to Portland and joined the Portland State University Cycling Team, which felt like a huge deal at the time. That team morphed into a notorious amateur squad called Ironclad, where I met the majority of my current and longest-lasting friends.

Many of those friends saw the warm glow of singletrack and now ride mountain bikes at least as much as they do road, if not more. Some of us raced mountain bikes alongside road, some cyclocross, and the one thing we all had in common was a deep desire to hang out with our little community.

We were a force. We partied as hard as we raced, and we didn’t care that our results reflected the sunrises we watched before bed. The first thing that my road racing team taught me was how to create deep and meaningful friendships with people I may not otherwise have much in common with. We had bikes, and we had each other’s backs. That was more than enough. 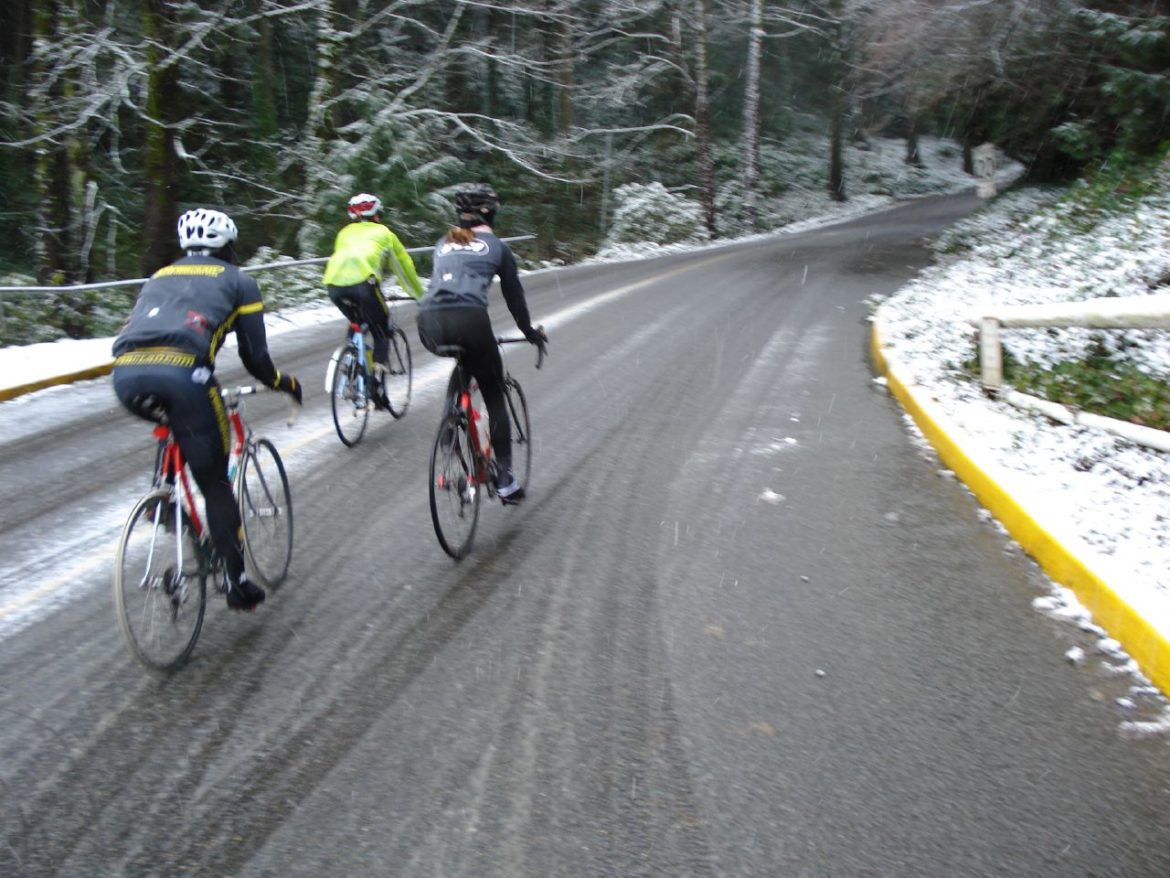 My second lesson came while riding wet asphalt alone in the unremitting Oregon rain for 4-6 hours stints. It was not necessarily anyone’s idea of fun. Even the toughest birds wouldn’t mind a break in the clouds, or a teammate to commiserate with.

However, rain happens, and teammates have their own work schedules, so some days you had to roll solo. Those long slogs, grinding climbs like Sisyphus and eating putrid energy bars taught me a great appreciation for physical and mental suffering that I regularly benefit from today. While my road bike’s flat tires collect cobwebs in the basement, the miles I spent with numb hands and blurred vision helped me understand that we can ask a lot more of our bodies and minds than we might think.

Another element that has clearly benefited my trail riding time is the fact that road bikes are fast. An amateur road racer can descend with more speed than most of the best World Cup downhill racers in the world, simply because the surface allows it. Riding on the road helped me gain confidence and comfort with high speeds that are trickier to achieve on trails.

Furthermore, pushing the limits of traction on asphalt emboldened my great appreciation for mountain bike tire and suspension technology. When road bike tires start to lose traction, you hit the deck and paint your hips a permanent scar-pink. When your knobby tires start to drift you can usually laugh aloud while you skip the rear tire around and redirect the boat. In the case of traction, road bikes remind me that I would rather ride mountain bikes.

From an athlete’s perspective, racing on the road planted a deep sense of sacrifice and humility between my ears that helps me stay levelheaded in mountain bike races today. I would be working far harder than I wanted to in a race to cover attacks from other teams, and then it would come my turn to attack. Our protected rider needed to rest in the beehive while the rest of us wore out the other team’s best athletes.

Knowing without a doubt that I was going to be dropped from the peloton after the effort, and would ride the rest of the race alone, I would go off the front with whatever flits of energy I could find, hopefully enticing the right rider to follow me. When the program worked it was brilliant, and when it didn’t we were all stoked to have given everything we had for our friend’s shot at the podium.

Before racing on the road I had entered a few XC and downhill races in Idaho, but spent most of my adolescence smoking cigarettes and playing bass in punk rock bands. Joining a road team was my first experience with a true team-sport that I chose to be part of, and I had a lot to learn. Our team captain taught us all of the fancy tactics he had gleaned over years of watching pro-tour road races. We worked hard to execute his plan and were successful enough to keep up the fight.

Those seasons spent discussing pre-climb attacks or penultimate lap maneuvers help me break down the courses I race today. In XC events it helps to learn where you will be able to pass before you take the start line, so you can ride smart and attack where it counts.

Learning to watch for the strengths and weaknesses of your competitors can save a lot of energy, and gain steps toward the podium. For enduro, tactical course recon is a vital element of riding at the cusp of control. Knowing important elements of the track, and considering how your skills work with unique trail styles can make for a solid run. 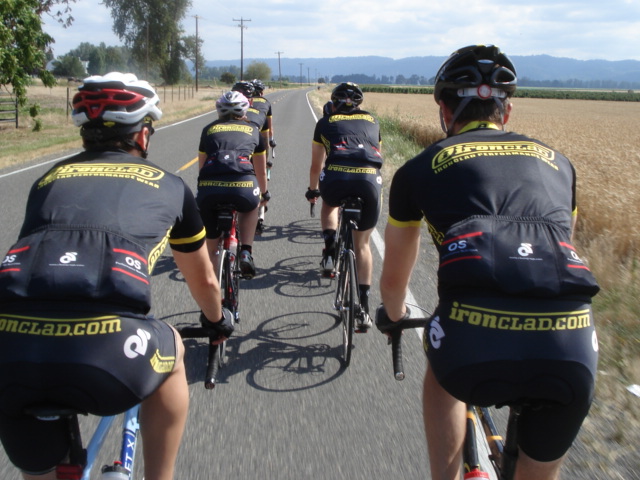 A final element of the camaraderie and skill-building above those skinny tires took place alongside the road, or in the repair stand. Road and CX bikes are fairly simple, and it was fun to learn how to repair every element of the bike simply by watching my teammates work on theirs. Those lessons have been honed and paid forward tenfold since, and adding the MTB-specific bits was no great endeavor. Furthermore, swapping tubes and righting derailleurs alongside a busy highway in the snow was a quick way to see the greater character in the humans around me.

Hmm, after reading through these points it seems that racing with a road team taught me as much about how I want to be a human as it did an athlete or mountain biker.

Now, back to the leg shaving.

The general public: “Why do road cyclists shave their legs?”

The truth might encompass pieces of those points, but if no road cyclist ever shaved their legs, few people would choose to do so for the aforementioned reasons. Folks do it because it’s part of identifying with their culture. It’s similar to how mountain bikers wear helmets with visors too short to block the sun and all have future van-life floor plans. Culture and a sense of belonging run deep, as evidenced by the number of times I needed to mention that I don’t ride my road bike anymore in this article. I am proud to be a mountain biker, and I love my whole filthy community, but I am equally thankful for each of these old roadie homies I know and love. Thanks, y’all.

“the miles I spent with numb hands and blurred vision helped me understand that we can ask a lot more of our bodies and minds than we might think” <—truth. tough days on the bike help put life into perspective. every time the trail seems too tough, just think about how lucky you are to have an activity to do and the ability to do it.

I have never had a desire to ride rode but have the benefits thrown in my face almost weekly. A couple of guys in my weekly group ride are former roadies. I am always impressed with their efficiency and how comfortable they are on the bike. There seems to be a sense of balance and ability to pick up new skills. Still not interested in riding road but could get into gravel racing. My respect for roadies grows for their skill but I can’t get past being anywhere near cars. I don’t trust other drivers when I am inside my own car. Definitely don’t want to be me vulnerable on a bike.

Great article. Everything you said is true. You forgot about the training on the road bike and it benefits MTB. In simple terms road biking builds strength and stamina. Lance Amstrong showed that when he started MTB “leadville 100.

M.Krupp I agree with you. I hate riding on the road but right now I don’t have much of an option here in Okinawa. I have three friends that have been hit by cars out here and most of the time the drivers don’t even stop. I ride on the side walk and keep it moving.

I ride a little bit of everything. I road commuted Monday and Tuesday. Social group ride Tuesday night (total of 108 miles Tuesday). Ran last night. My Enduro is on the car for my Thursday night ride. XC race this weekend.

Every type of riding helps out in another form.

I’m also a recovering triathlete. Love that sport too.

with over 50 years on the road bike and klunkers since 1977 i agree that the road is too dangerous because of distracted drivers and their damn phones… as far as shaving/waxing legs i learned it was to help mitigate skin tearing when sliding on pavement… the hairs get pulled and cause more skin loss… i still ride almost daily even with mild COPD and bad knees but i’ve gone to disc brakes on the road to forego melting off tubulars in the hills,
once was enough… off road is wonderful but marin county ca is one of the most restricted places to attempt to ride… but they still have to catch you…