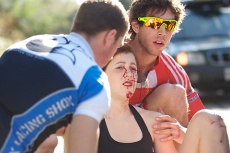 Rachel Atherton, was hit by a car while riding her road bike in Santa Cruz last week. Atherton dislocated her shoulder in the accident, Velonews reports:

World downhill champion Rachel Atherton of Great Britain dislocated her shoulder after colliding with a car in Santa Cruz, California, on Sunday. Atherton, who rides for Animal-Commenal, was training on her road bike with her brothers Dan and George when the accident took place.

The three had been in Santa Cruz on a training trip since January 9.

Atherton reportedly hit the car head-on, with her Cervelo road bike taking the lions share of the damage. The 21-year-old Atherton also suffered cuts and bruises to her face.

I always used to think a dislocated shoulder was the most glorious of bike related injuries. I was riding with my friend, Esther, at Skeggs once where she took a nasty tumble and dislocated her shoulder. We had to hike out about 2 miles and though I tried to keep Esther’s mind of the pain by trying to be funny, I knew it was a long and agonizing walk for her.

We made it to the closest fire station and Esther was feeling better thanks to a couple hunky firemen and a little morphine. Must have been a good dose because she was feeling well enough for me to take a picture of her grotesque bulging arm socket (man, I wish I had a picture to insert here!). After a few hours in and out of consciousness at the emergency room, Esther was all better and had proven she was one tough cookie!

So here’s to the tough cookies like Esther and Rachel Atherton, who can bounce back on their feet bike after a serious injury and giving us all a sense of mental and physical toughness to admire!

I truly hope that she heals up well soon. I like Rachel. I had an opportunity to meet her and the Atherton brothers, George and Dan at a DH race a few years back, and they are very good people. Rachel, she kicks butt on the slalom runs & has a great sense of humor. I hope all goes well for her and she is in our prayers.

other than the fact that road riding just seems like ‘exercise’ to me compared to the fun and mental challenge of mountain biking, this is a big reason why i don’t road ride. i’ve yet to see a car on the trails!

I agree with jbronko – to me, road riding is more dangerous than mountain biking mainly because you can’t control the cars, on the trail its usually your own fault if you crash! Plus, it hurts more when you fall on the road. Get well Rachel!

Hope she gets better soon.