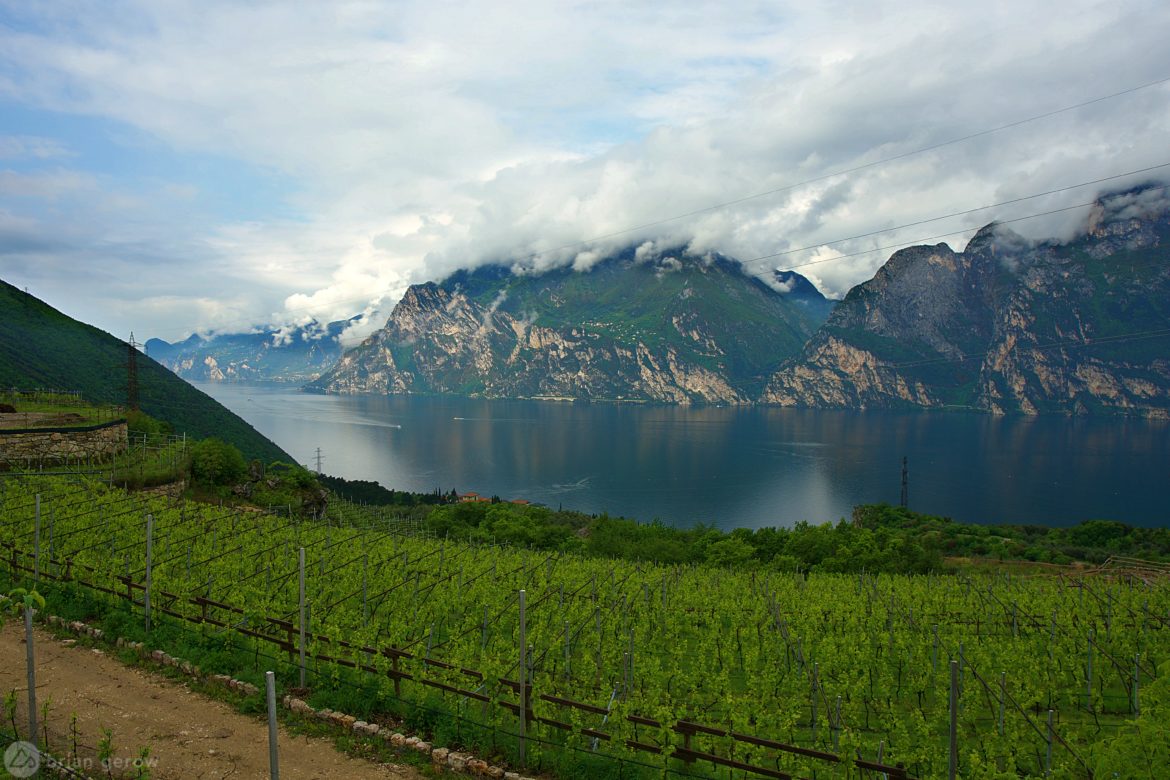 Riva Bike Festival is essentially a smaller, lakeside version of Eurobike that takes place in early May a few hundred kilometers south of the larger event. Thousands of folks from all over Europe attend the three-day long festival that hosts over 300 different vendors, with several professional and amateur level mountain bike and gravel races per day, multiple parties every night, and a boatload of bikes to demo. The whole shebang goes down at the northernmost end of Lago di Garda, in the mountain bike enclave of Riva Del Garda, Italy. 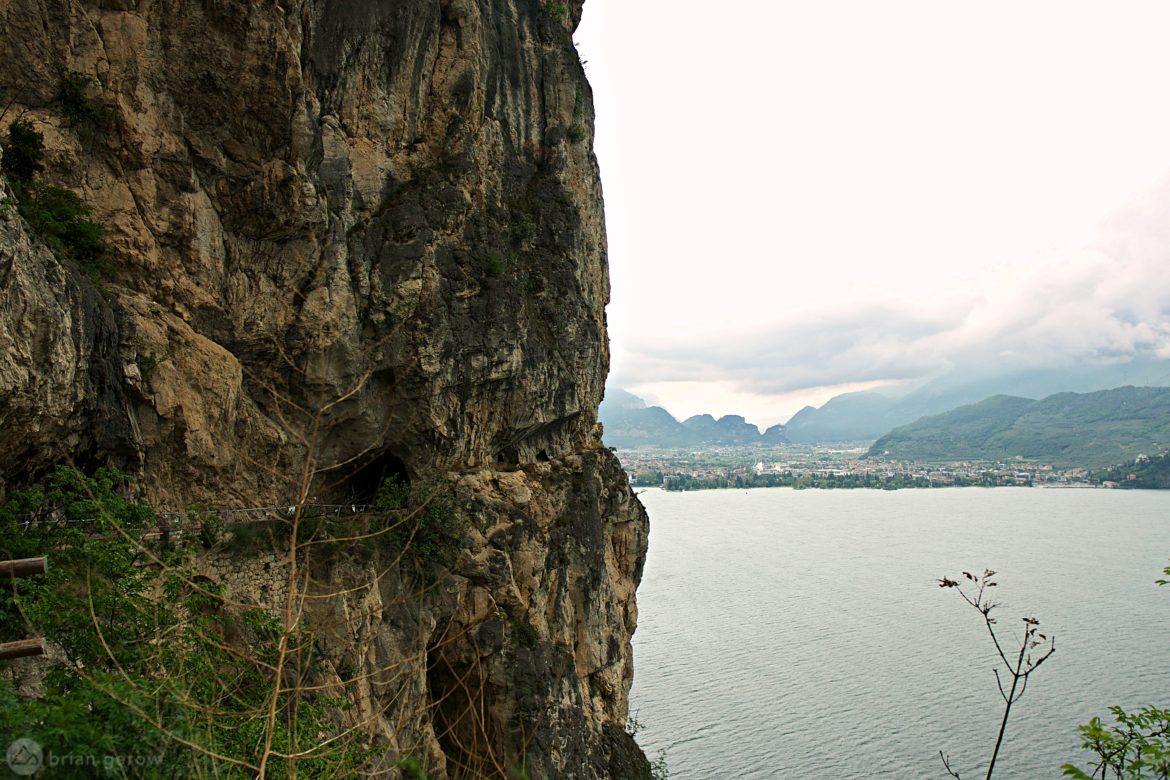 The demo bike route winds through sheer cliffs on the west side of Lago di Garda. The mountain biking and rock climbing hotspot of Riva del Garda sits low in the distance. 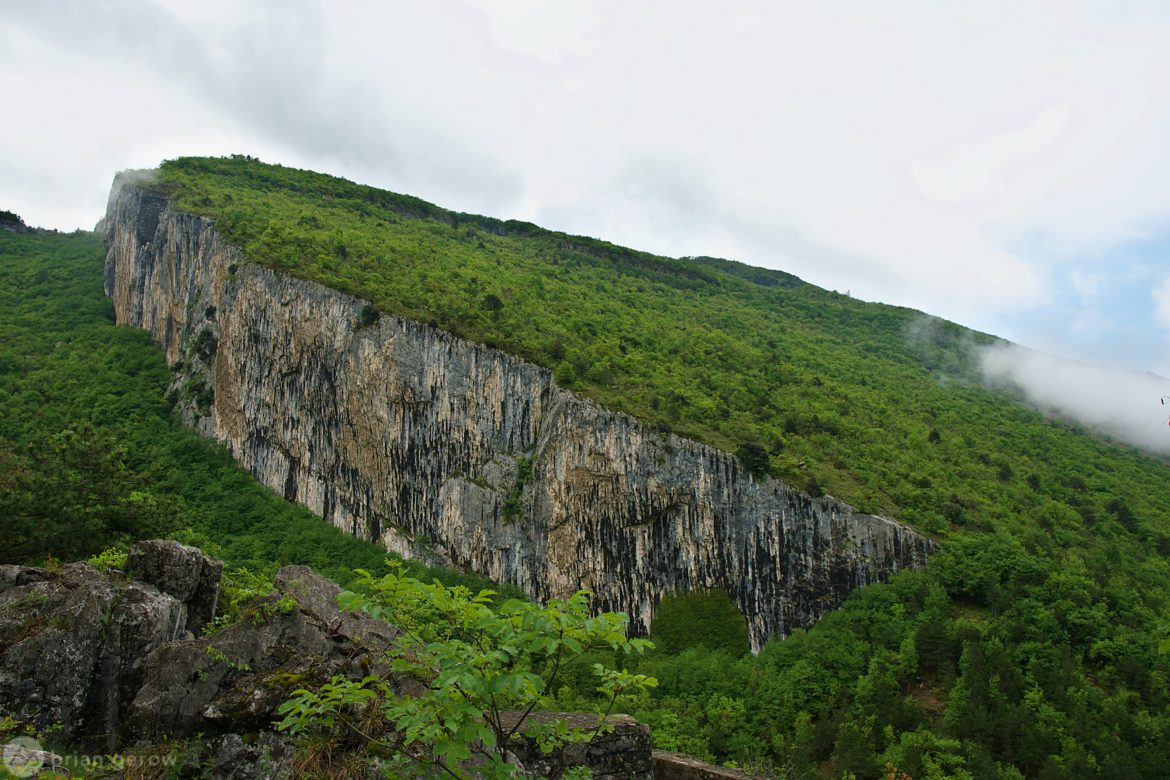 Steep rock faces peak up from the forest everywhere you look. This place is an unmistakable rock climber’s paradise. 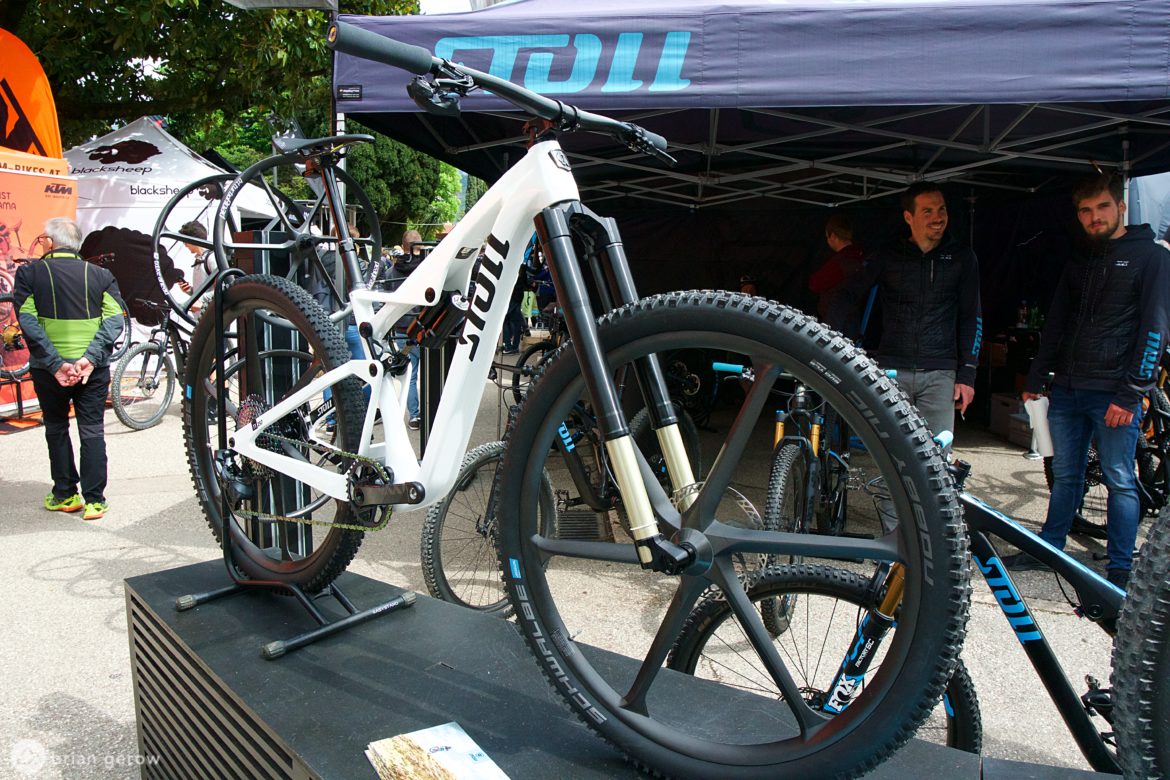 In rare form, it rained throughout this year’s festival, but I managed to collect a few photos in the brief, drier moments. This Stoll T1 Trail bike was by far the most attention-worthy on the expo grounds. The Swiss-made whip is covered in handcrafted components from BC Intend suspension, Trickstuff brakes, and Bike Ahead carbon wheels. 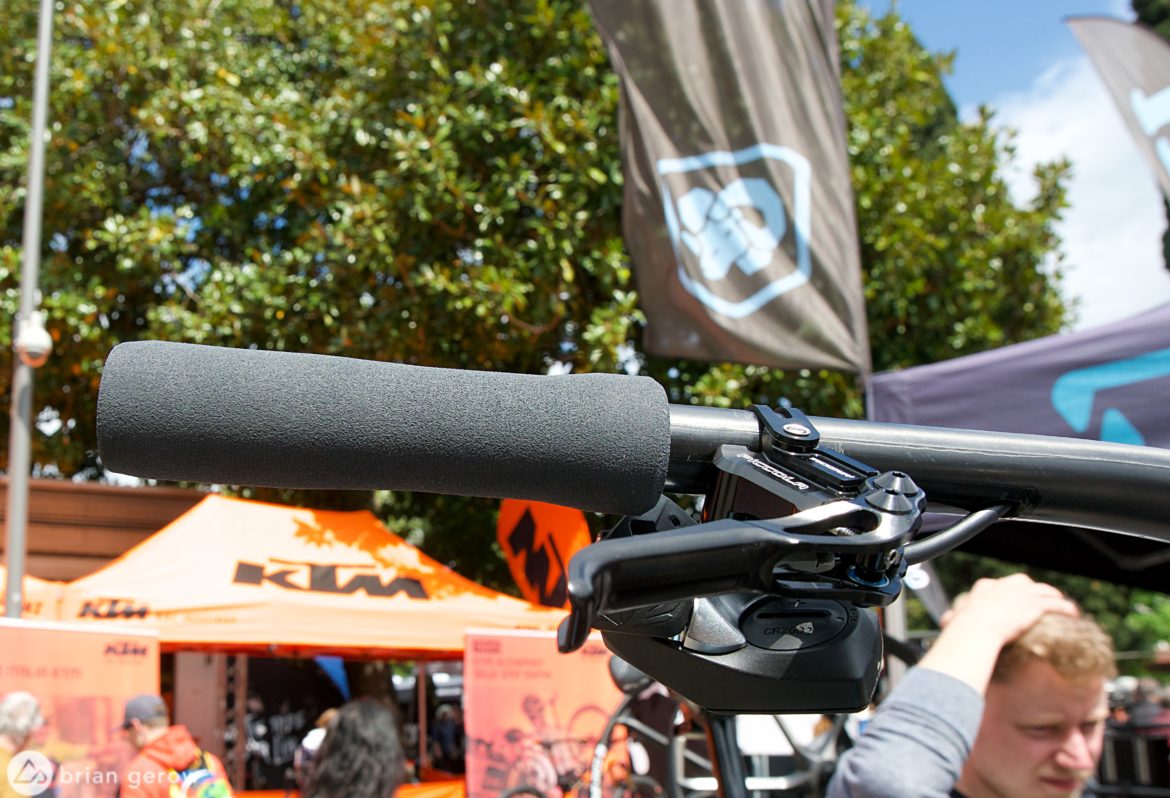 The trend toward a clean cockpit at all costs continues with this bike, sporting SRAM’s new wireless shift system, and Piccola brakes from Trickstuff that send the hydro hose immediately into the handlebar. I am curious how they will prevent the situation wherein you crash and the steerer tube is turned far enough to sever the brake hose? With all of the emphasis on hiding hoses these days, I am sure we will soon find out how to remedy this. 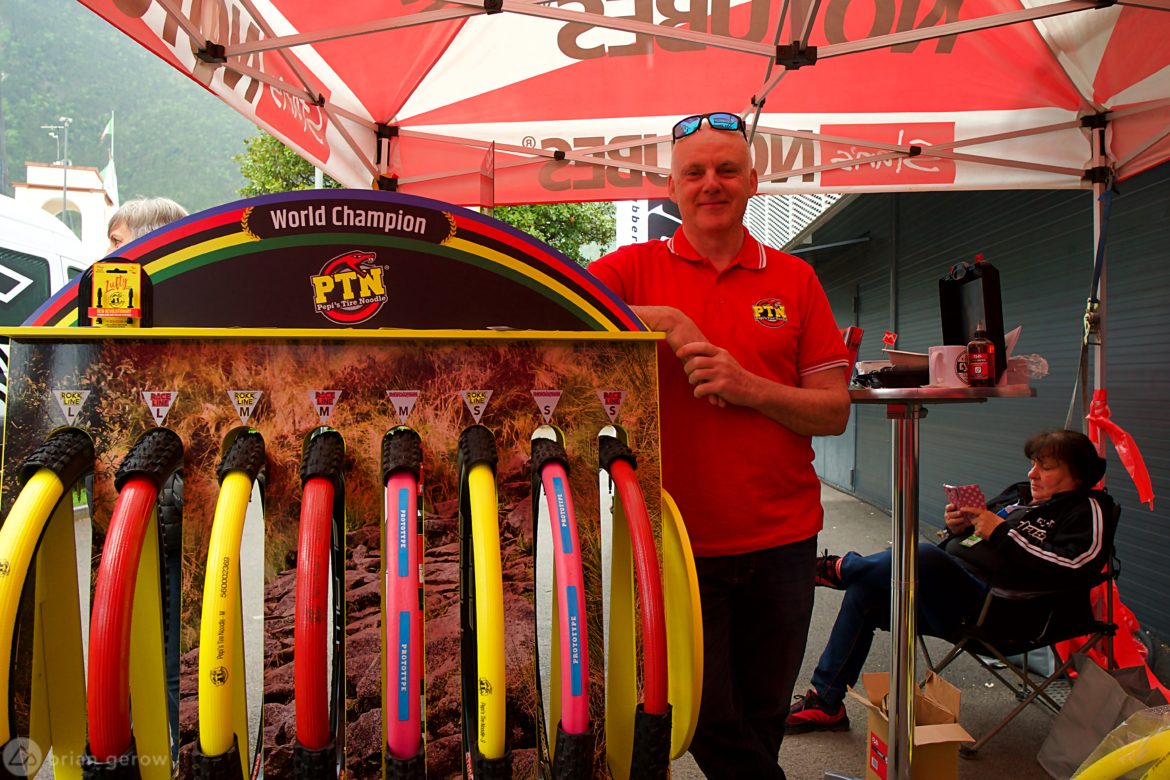 I had a good long chat with Pepi from Pepi’s Tire Noodle (PTN) about how Nino Schurter’s team analyzed every single puncture protection system and landed on the PTN system for the World Champion. Look for a review of Pepi’s enduro offering in the coming months. 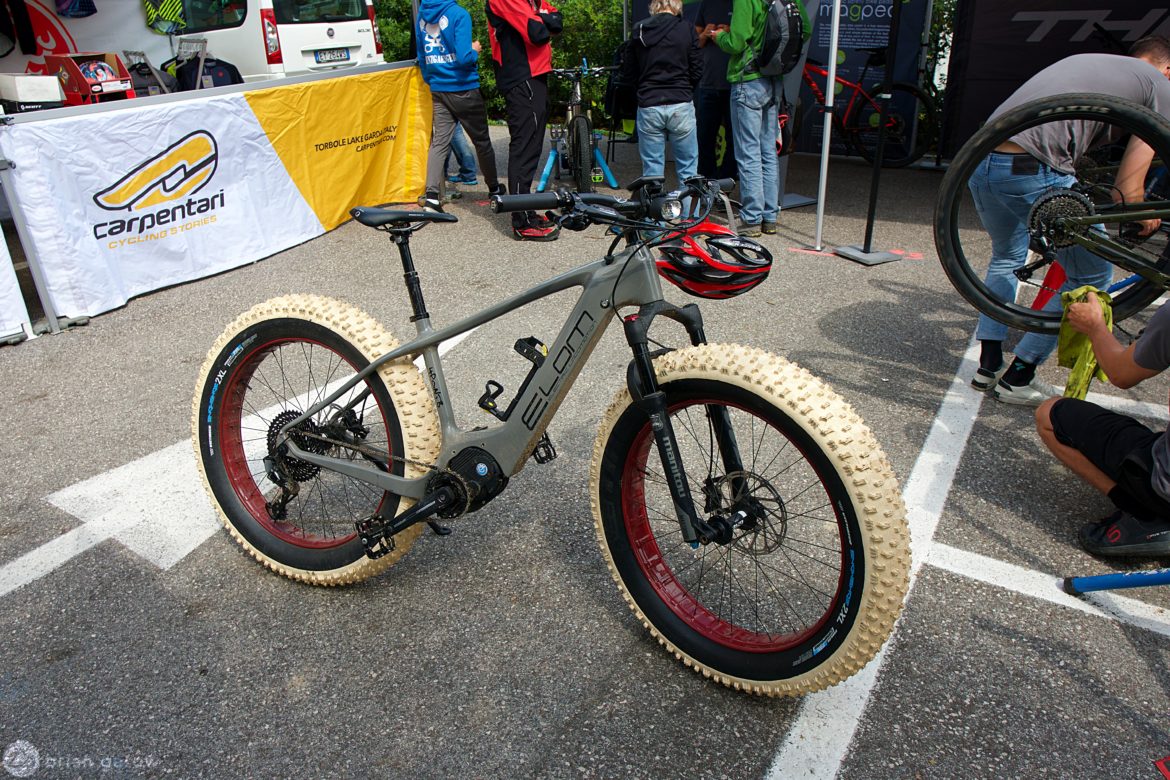 It wouldn’t be a European mountain bike festival without a healthy load of e-bikes to test and check out. This was the only e-fat I found. 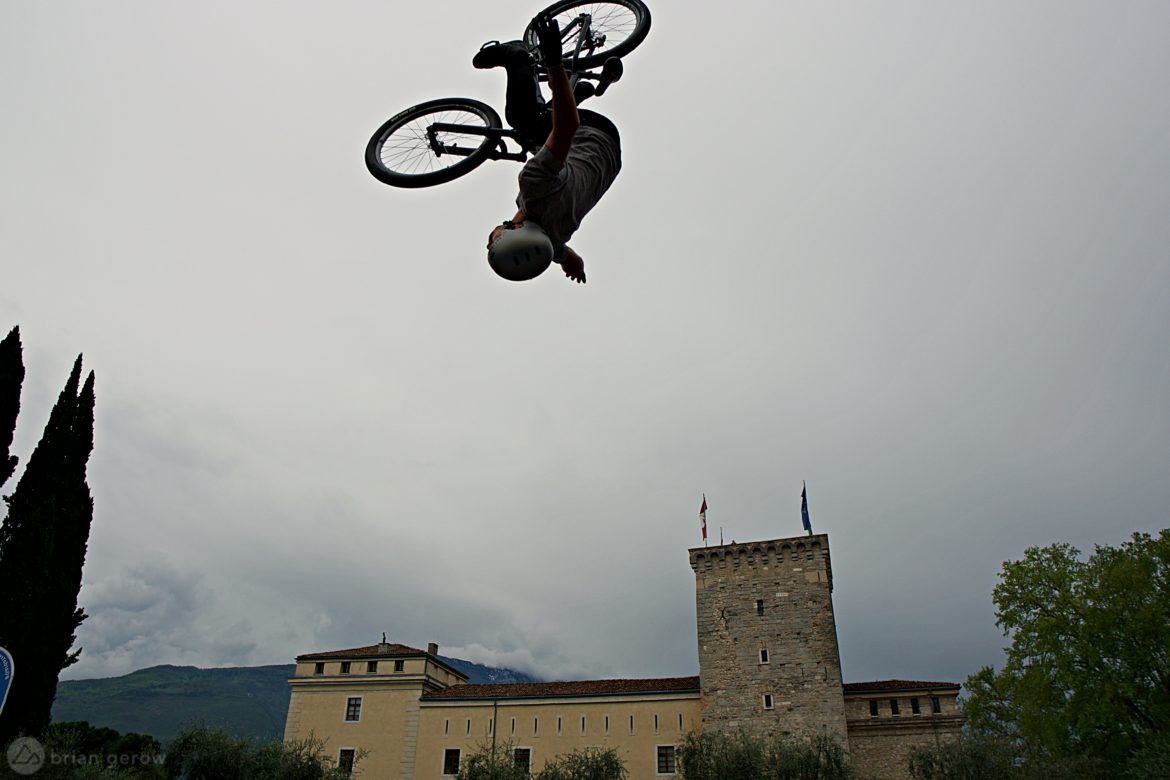 In addition to all of the fantastic food, baller bikes, quenching beer, and constant music at the event, a team of French freestyle riders put on a show in a side paddock any time their funbox and ramps were dry enough. 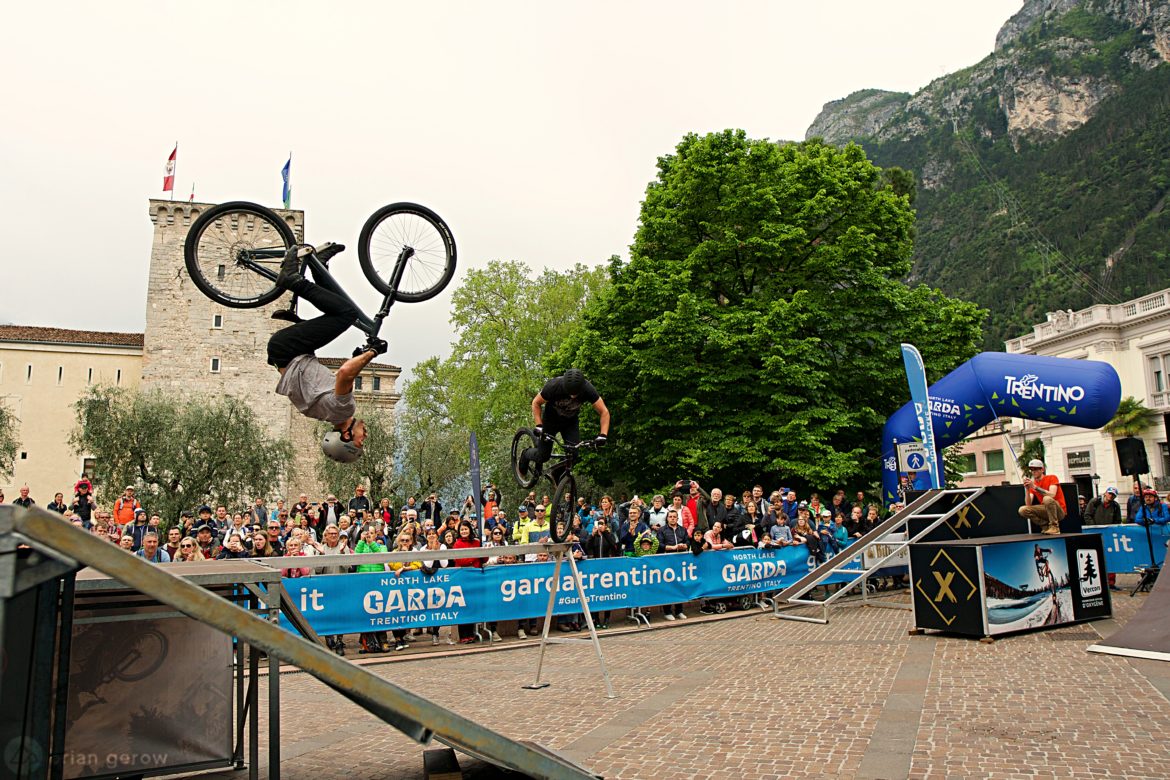 Four tricksters on bikes, one parkour athlete, and a scooterist performed during every dry second of the weekend. 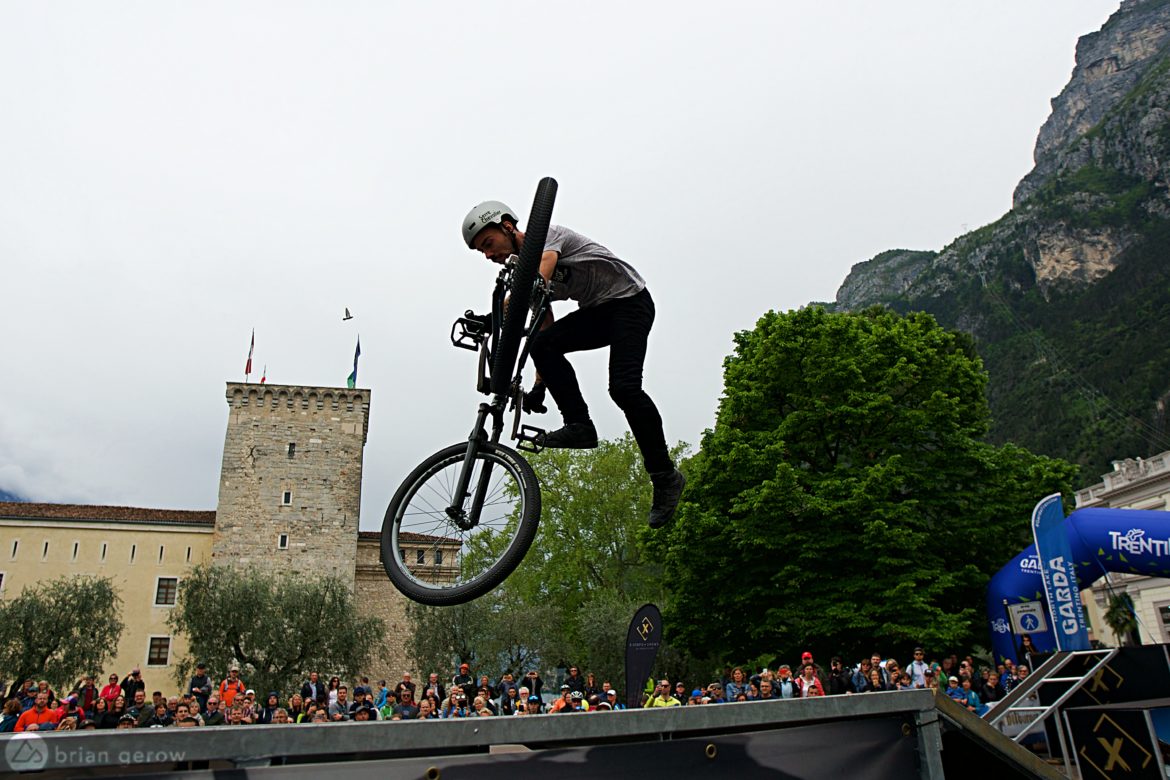 This crew travels around throwing shapes throughout the year, and their honed craft was stunningly impressive. 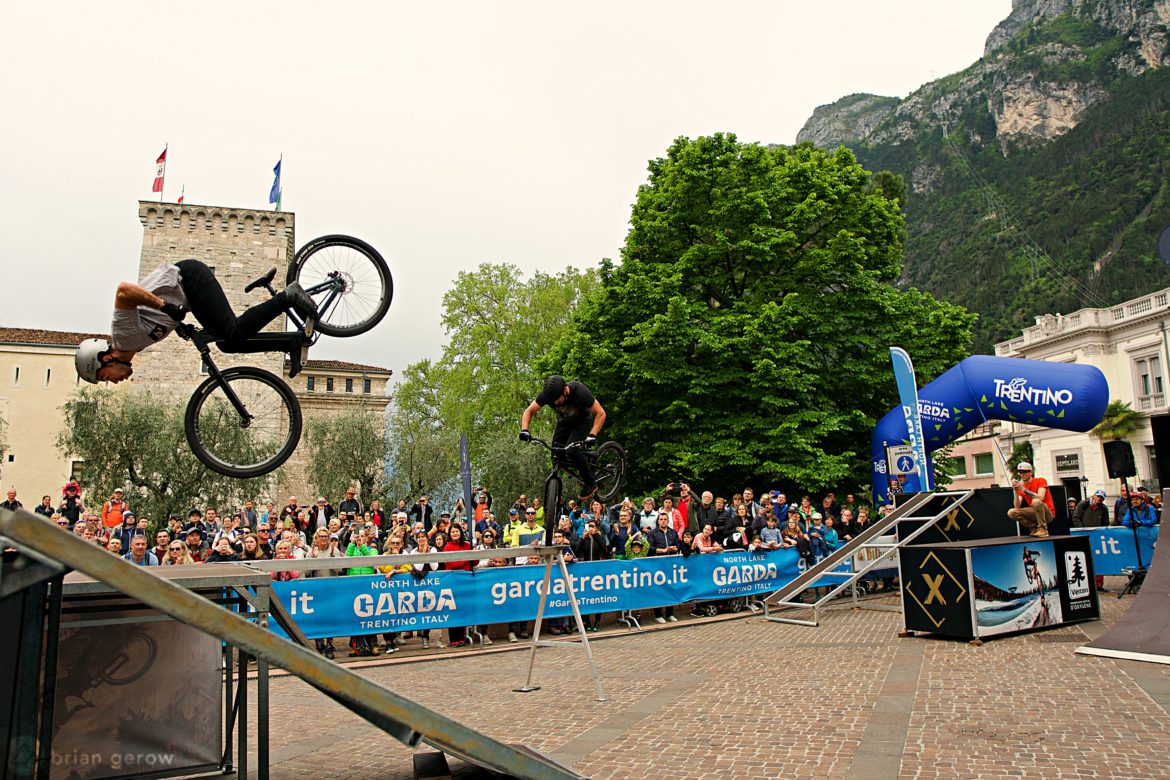 Yes, that is a low flip. 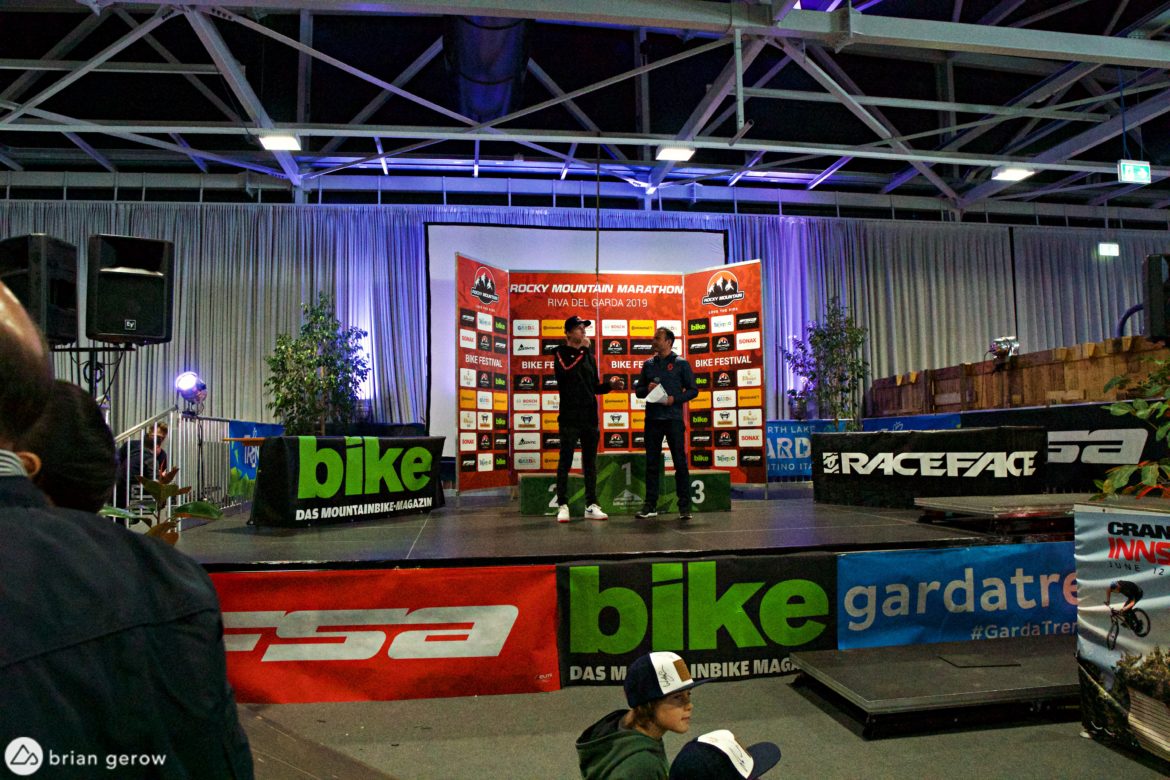 With daily enduro, gravel, e-enduro, and XC races snaking through the nearby forest, the awards stage was seldom empty. 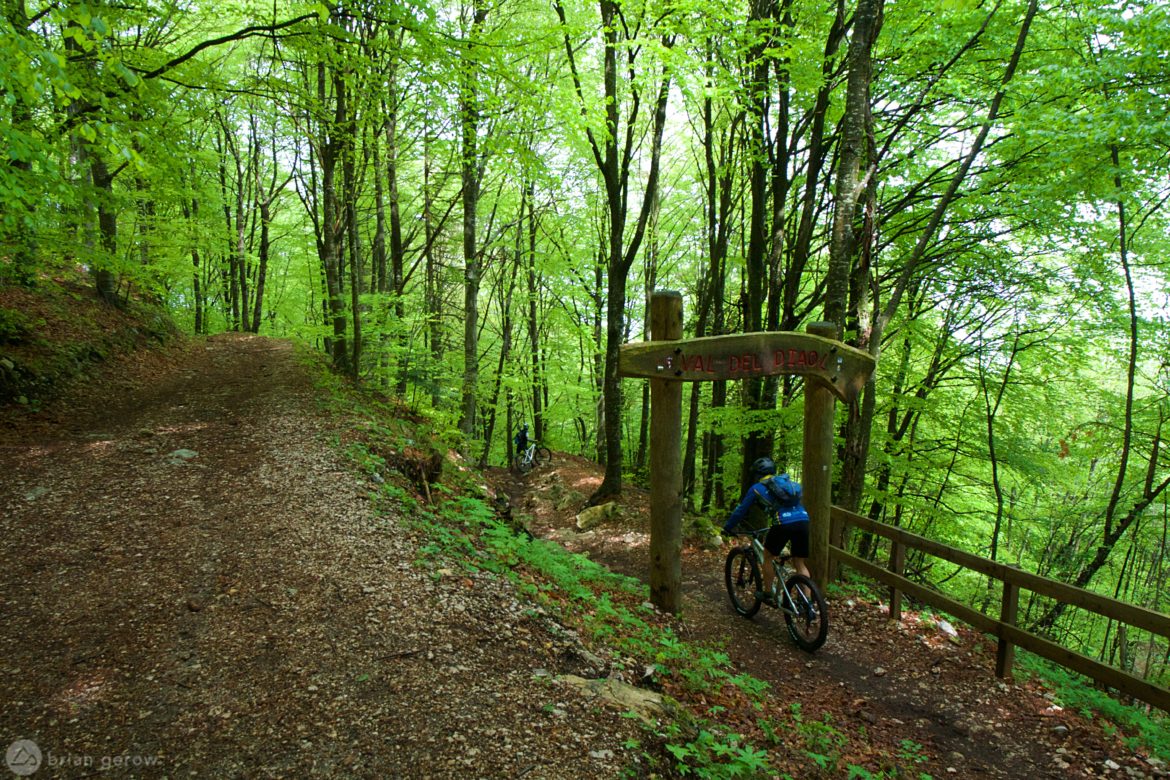 The trails around Lago di Garda could be summed up succinctly with one word: rocky. Though the lake is nearly encircled by trails, the steeper and gnarlier ribbons are on the northeast tip, along the flanks of Monte Baldo. 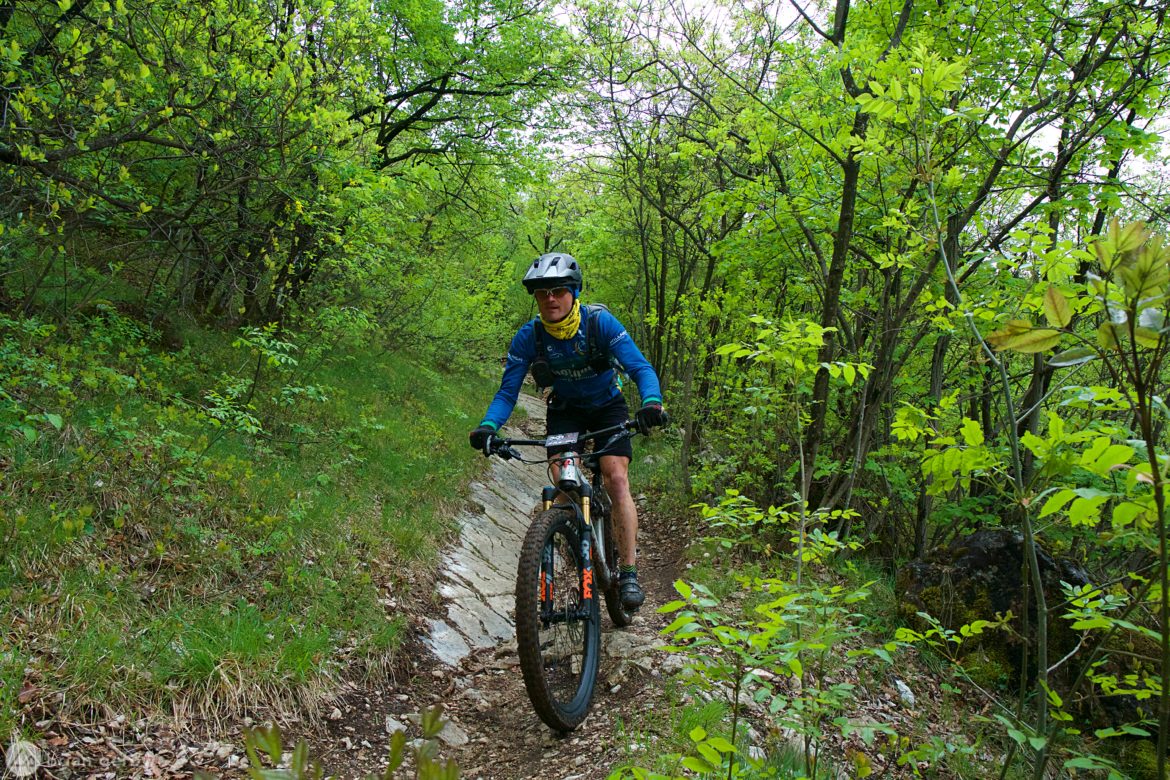 I ran into some riders from central Germany who were testing Liteville bikes from a local shop. They were stoked to have me capture their descent. One of them said that the trail would be slick, half giggling with a side-eye smirk, and he was not joking in the least. 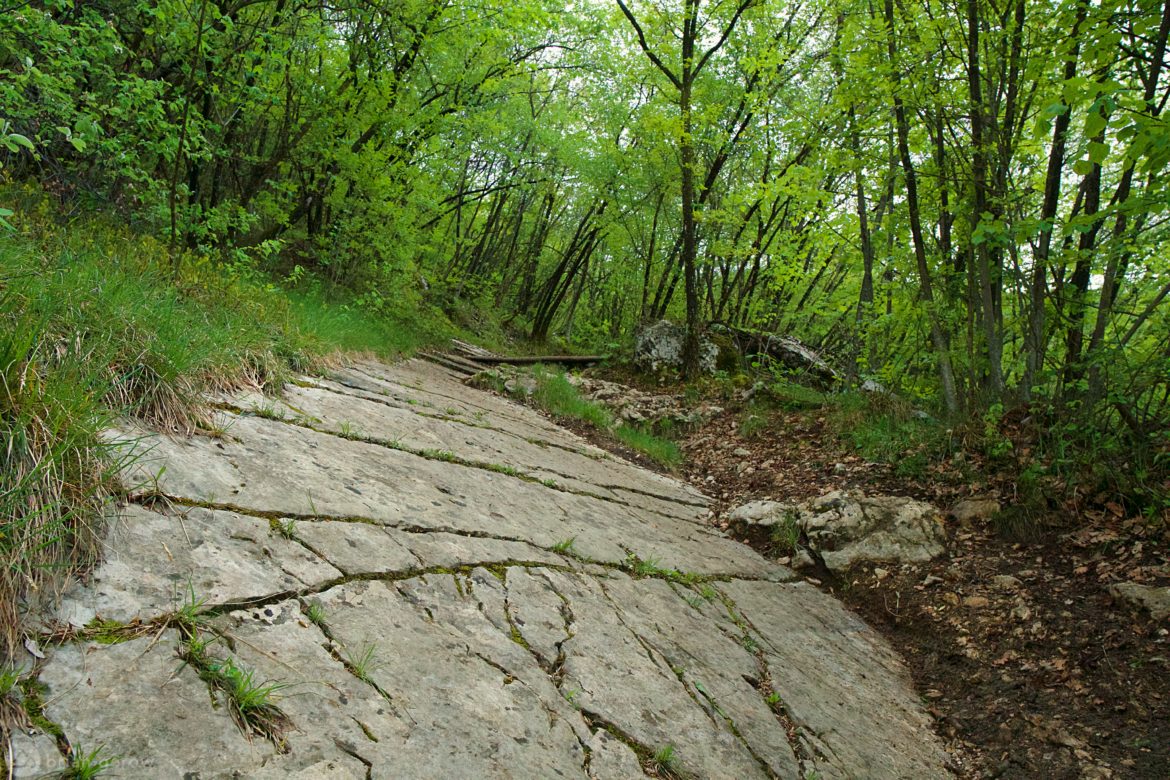 I love a good bike dance on the rocks and Vale de Diaol provided just that. I look forward to riding here in dry conditions sometime soon. 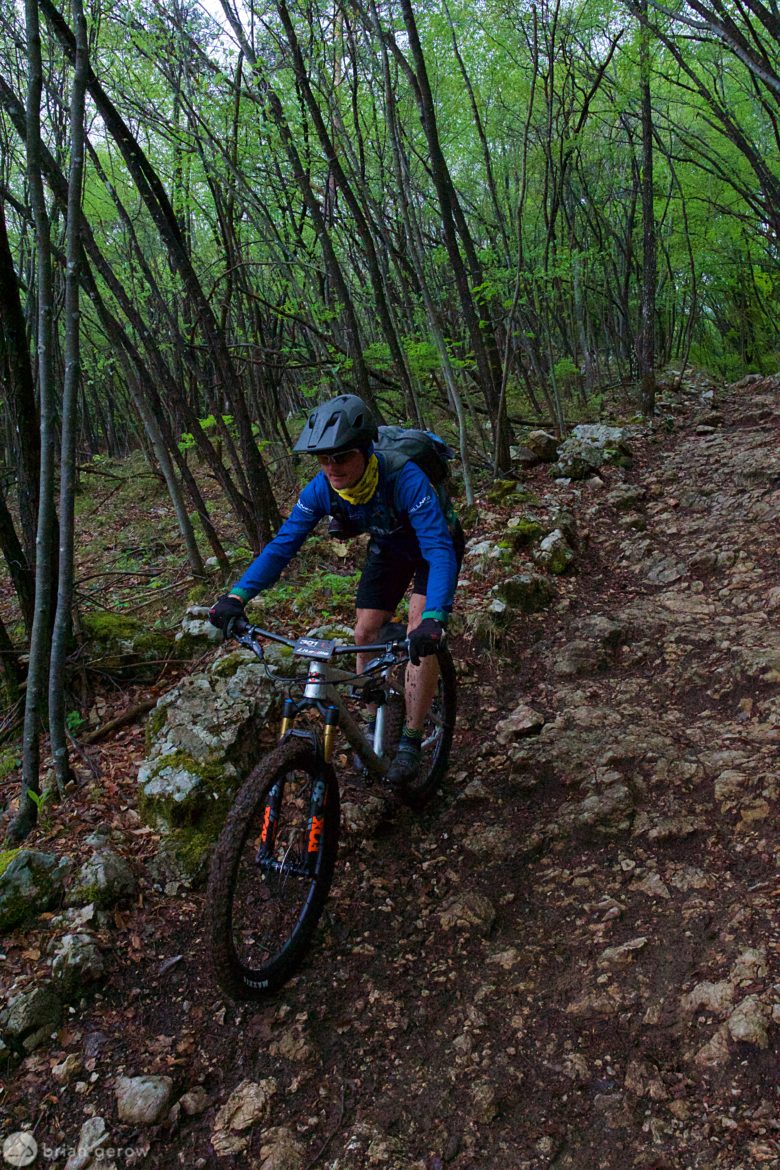 Loaner bikes on soapy stones made for some loud laughter as we rolled toward the lake. 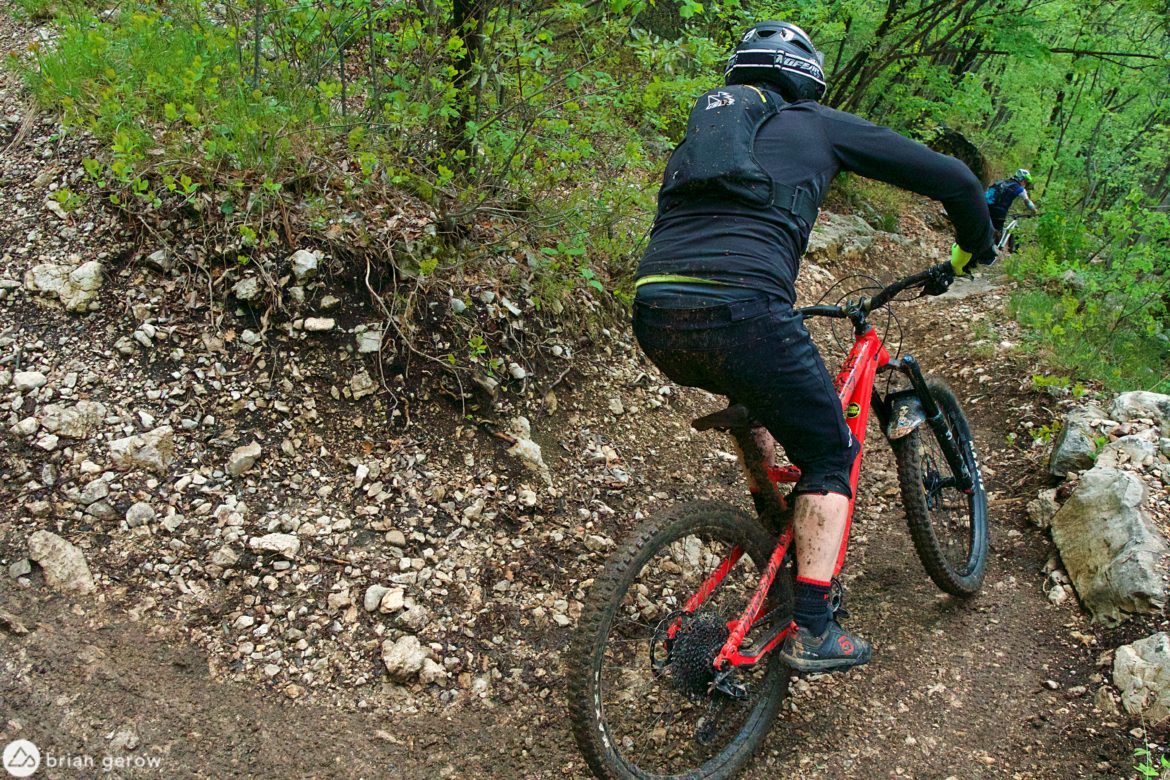 A Garda local ripped by us faster than I would ride this trail if it were dry. It pays to know the best lines, but this cat’s slippery rock skills were astounding. 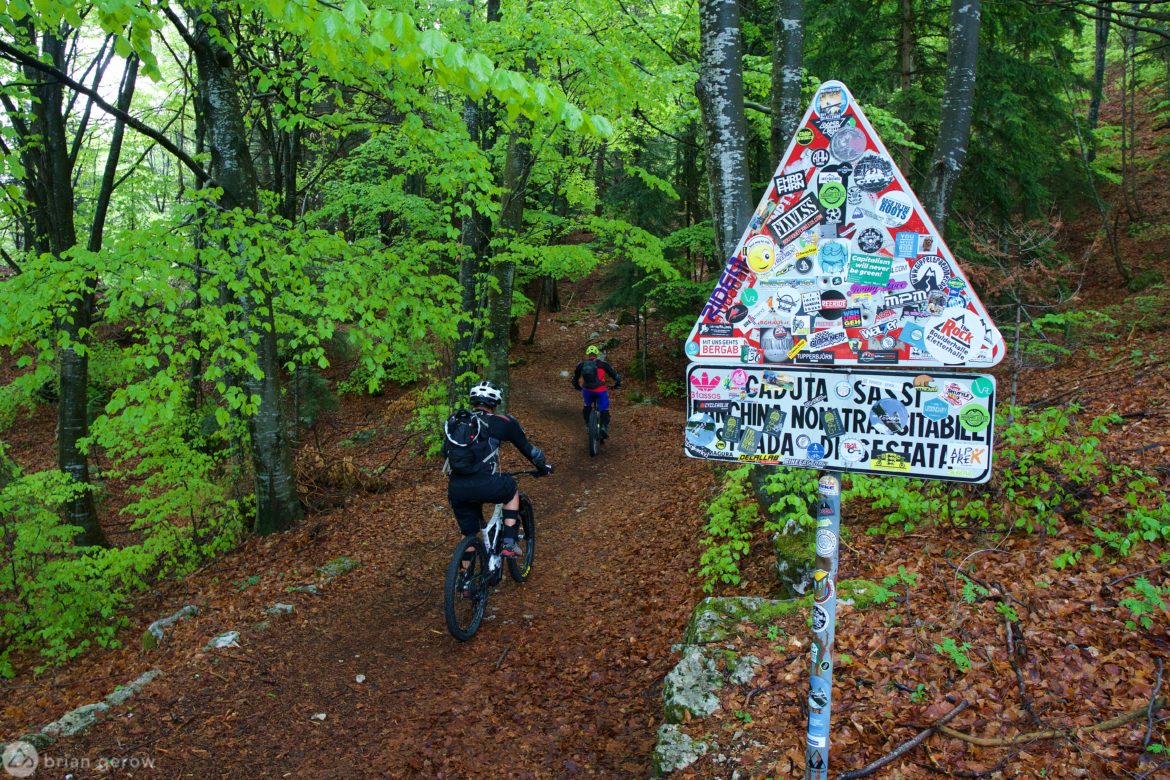 Covering warning signs in your favorite stickers is clearly an international practice. 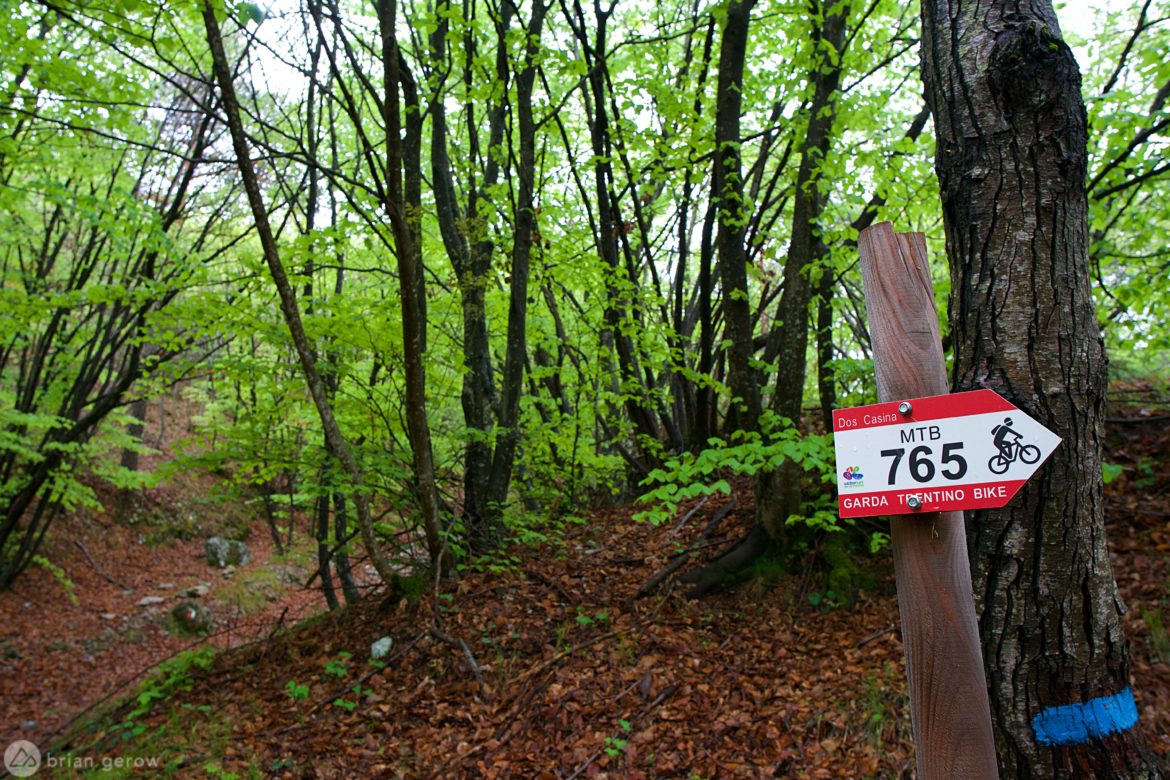 The tracks are all well marked, and maps are available at every hotel and tourist office. 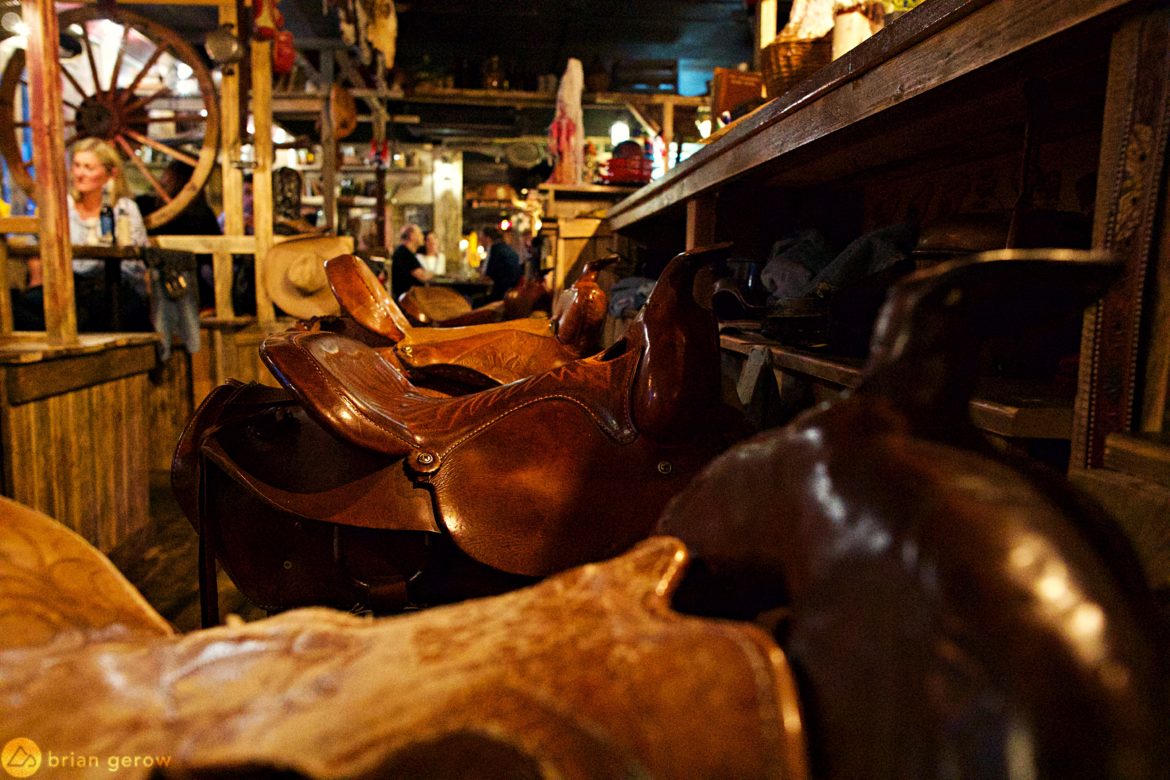 While the food in Italy is delicious almost anywhere where you go, I never pass up a plate of Mexican grub. I stayed across the street from a Tex-Mex spot, just above the lake in the tiny town of Nago. The bar’s international flavor had most patrons ordering burritos in German or Italian, over blaring country music in English, from employees who speak more languages than I can name by ear. It was definitely my kind of place!

Stay tuned for a longer look at the trails around Lago di Garda and the nearby trail systems this summer.

Sorry Mister. You start your article with a big mistake and misunderstanding: Riva Bike Festival is NOT a smaller, lakeside version of Eurobike! Eurobike in september is a fair for professionals, factories, producers, vendors, shops, without any consumer. A trade show. It’s a place to do business. Riva Bike Festival is, as the name says, a festival: for consumers, bikers from all over Europe. The factories show their products and mountainbikers have the opportunity to test them. It’s a place to have fun. Hope, the difference is clear now.

MarvinGardaDolomiti, I understand that the events are different, as I have attended both. The opening phrase of the first sentence is not literal but is intended to focus on the similarities between the two events, rather than their differences.