Do you remember the first time you saw someone riding a singlespeed (SS) mountain bike? I bet your first thought was “what do they think they’re doing out here without any gears? Don’t they know they have to ride up hills?” I also bet you were immensely confused when they rode away from you on a climb – I know I was! After my first SS encounter I walked away with the conclusion that you must have to be a beast to ride a SS MTB – I mean, it’s gotta be really hard, right?I’m going to let you in on a secret: singlespeeding isn’t nearly as difficult as you think. Heck, I rode almost exclusively on a SS for over a year, and trust me – I’m not that strong.

I wanted to do a post that might convince some of you to give singlespeeding a try for yourselves. There are already tons of blog and forum posts on the interweb about the benefits of SSing (light, simple, quiet, builds strength, etc.) soI decided to do something a little different. I lent my 29er singlespeed to five non-singlespeed riding buddies to get their thoughts. These guys and gal are normal riders, they’re not slow, but not that fast either. They might do a race or two every year for fun, but they primarily ride because they enjoy it. That’s what it’s all about after all! 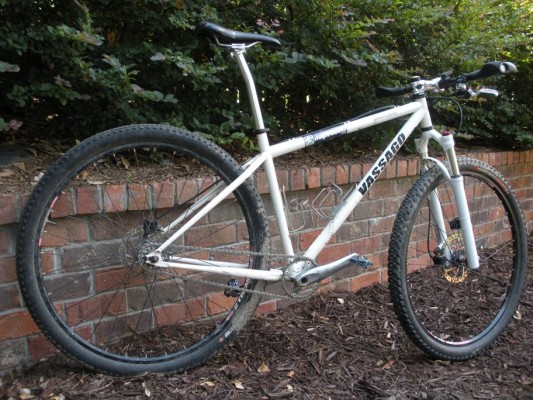 My bike, a Vassago Jabberwocky. 25.16lbs of steel-framed, one-geared, big-wheeled goodness. And yeah, it’s got a bell.

Thoughts on the singlespeed:

Within the first 2 minutes on the Keg Creek trail I was reaching for phantom shifters. The one thing that I noticed and could get used to was how quiet a singlespeed is. Just the tires on the dirt. Never knew how noisy the derailleurs were. Also seemed like as soon as I pushed down on the pedal there was power, no delay at all.

I was worried about two climbs: the first one, going up Boulder Creek, was a lot easier than I expected. On the steep rooty climb just after the “Bed Rock” crossing I managed to go up half way before losing momentum and walking the last portion. To be honest though, I struggle up this one even with a geared bike. Long ascents were not as bad – I got off the saddle a bit more than I normally would. Overall the climbs were not as bad as I thought they would be. I am also certain that given a few weeks on a singlespeed that the climbs would be a non-issue. It did seem that you needed to go a certain speed or cadence or else you might be walking.

The downside that I noticed was on long downhills – I wanted to put it into a higher gear to get more speed. Eventually I overcame this by picking up the cadence. I also rode a section of paved road from Keg to Bartram(in Wildwood) to see how I would like it. Again I was reaching for phantom shifters. And again I had to overcome by picking up the cadence. I believe over time these problems would be non-issues.

Overall I did not miss the gears and the quietness of a singlespeed trumped the few times I really wished I had them. 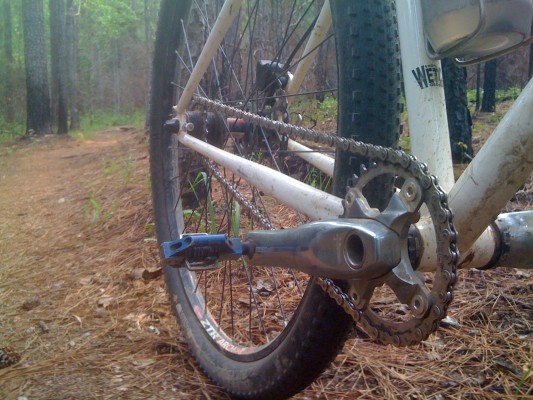 The ride: Rode at FATS – Skinny(ccw) -> Brown Wave(ccw) -> Great Wall (cw)
20.2 miles. 1:58 riding time (surprisingly, not slower than on my geared FS bike)
Met Paul F. in parking lot and we decided to ride together. He rode behind. I always ride faster/push a little harder with someone behind me. I rode every hill without stopping; even the 2-mile climb out of Great Wall (cw). 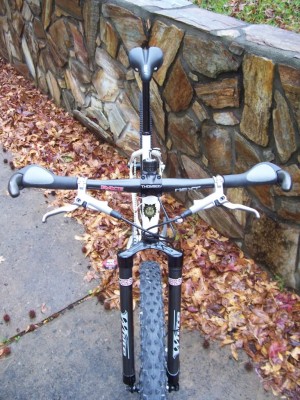 No shifters makes for a simple, clean, uncluttered cockpit.

I don’t know why I was so surprised at how much I enjoyed my trial singlespeed ride. After all, I spent the first 13 – 14 years of my life riding a singlespeed bike. And we rode everywhere then – through woods, fields, in the clay pit behind my house. Gears were something your mom had on her bike – a 3-speed cruiser. You were a sissy if you had a 10-speed (which the rest of us were secretly envious of).

So I chose the Turkey Creek Trail to ride as it is representative of 75 – 80% of the riding I do. It really didn’t take long to get accustomed to not having shifters. Maybe because I have been struggling with rear derailleur issues for so long, but it felt very liberating to ride without gears. The ride was definitely quieter. Yes, I had to come out of the saddle a few times more that I normally would have. I didn’t realize how dependent I had become on a geared bike – down shifting out of habit in the face of an obstacle rather than powering over or up it. The trail was very trashy from recent storms – a lot of trees and limbs down to climb over and around. Despite that, I thought my ride time was pretty good – 55 minutes in (7 miles) and about 5 minutes less out. On this trail, I found myself wanting a higher gear more often than a lower one. If I was slower than normal, I think it was on the flat and downhill sections when I normally would have pushed into a higher gear.

The bottom line is, now that I have a new geared bike (3 x 10), I convinced myself to convert my old bike to SS. I’m looking forward to riding it on some more challenging trails. Maybe my opinions will change when I have to do more climbing. Hopefully I will get stronger. 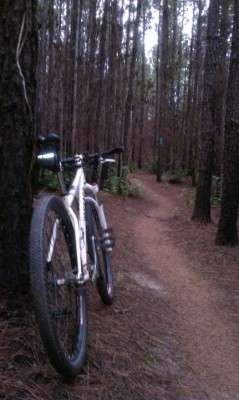 First impressions @ Skinny like most of the trails at FATS, Skinny starts with a long section of downhill and very, very quickly (within 50 yards of the parking lot) I ran out of spinning speed. I love going fast, so not being able to do so under my own pedal-power was frustrating at first. I caught myself trying to pedal a few times where I clearly couldnt match my rolling speed. After I accepted the fact that gravity and a light touch on the brakes would dictate my top speed, I got into it.

The first thing I noticed was that instead of barreling down the trail like I do on my 29er FS and grabbing handfuls of brakes moments before potential disasters at big hits or sharper-than-expected turns, I was rolling at a more leisurely speed and found myself enjoying setting up jumps and smoothly carving through corners. Sure the overall pace of the ride was slower, but it ended up being more enjoyable. Later in the ride, I also seemed to have more energy than normal. It could be attributable to knowing I needed to beat the rain back to the Jeep, but I like to think that it was due to the single speed. Normally I like rolling along in the big ring, pushing hard gears. With the single speed, I had no choice but to enjoy the ride at a more leisurely pace and it saved my legs for the uphill battle back to the parking lot. Normally at that point, my quads are starting to feel it and there are a few hills I dread. Now, even though I was climbing in a tougher gear than Id normally try to attempt, I had some reserves that pushed me through the steep spots.

I was riding platform pedalsagain. If the Jabberwockeys geometry were a little different, itd be a lot like riding my old BMX through the woods.

@ Canal trail Again, a single speed is best in the woods. It felt really slow riding through the neighborhood on the way to the trail. Reminds me of when I was a kid riding a BMX. The easiest thing to do is stand up, pedal as fast as you can for a few moments, then cruuuuise.and repeat. Once on the canal trailwell, I was concentrating more on getting back to the house in time for Stacey to pick me up for our trip to Beaufort to really notice many differencesexcept a whole new respect for single speed riders who fly through the woods. Dont know how they do it. There are so many spots on the trail where you could really pick up some speed, but I didnt manage to do that. Maybe Ill try again with clipless pedals.

Bottom line Id love to have one. As a second bike.

The advantage of riding the single speed on a trail that Im familiar with allowed me to anticipate and better prepare for the climbs. For instance, when a tight turn came just before a climb (knowing I couldnt drop it down a gear to make the climb easier), I didnt wimp out by squeezing the brakes. I kept all the momentum I could, went wider and leaned harder into the turns, which is what I should be doing anyway! Its good basic training and brought me back to the fundamentals of riding (momentum, shifting weight etc).

The workout was more intense and I enjoyed the exertion I felt afterwards. Id love to have a single speed for a second bike! 😉 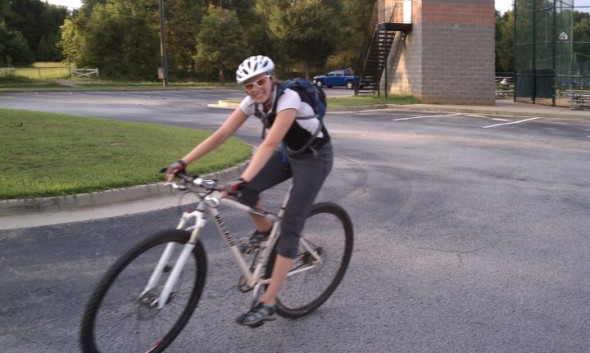 Stacey enjoying the ride to the trail. Photo: Trent S.

As you can see, everyone enjoyed riding the singlespeed, even if they didn’t think they would. The proof is in the pudding they say, so here’s my proof: BrianW, David, Tom, and maybe even Trent are all converting their old bikes to singlespeeds.

Keep an eye on the Singletracks blog – soon I’ll have a Tech How-To post showing you how to convert your own bike to a singlespeed! It’s a cheap way to try SSing without buying a whole new bike,it’seasy, and it is a great way to get your old bike out of the garage and back on the trails again.

Thanks to Brian, David, Tom, Trent, and Stacey for trying the bike and taking the time to write up their thoughts on it.

What do YOU think about SS MTBing? Ever tried it? Tell us what you think in the comments section.