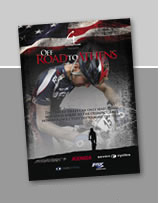 I’m starting to think that all great mountain bike movies have to be documentaries. Fictional cycling dramas always turn out cheesy (think Breaking Away and American Flyers) and most adrenaline flicks just don’t have a plot. Documentaries, on the other hand, combine the rush of riding and competition with the unscripted drama that surrounds the sport. This past weekend I had the chance to see director Jason Berry’s award winning documentary Off Road to Athens and I gotta say – it’s great.

Off Road to Athens follows the top American mountain bikers in their quest to represent the United States in the 2004 Olympics in Athens, Greece. The US can send just one female and two male riders and the selection is to be based entirely on UCI points earned during the year leading up to the Games. The decision to select the Olympic team on UCI points is a controversial one and it forces riders to race some of the most demanding mountain bike races in the world on a whirlwind schedule.

The race schedule takes the riders to courses in Europe and North and South America and the film crew is there to catch all the action against some amazing backdrops. From the volcanic soils of Ecuador to the wet and muddy slopes of Austria the film follows great riders like Alison Dunlap and Jeremiah Bishop as they slog it out for UCI points. Once again we see that the life of a professional mountain biker is anything but glamorous– brutal travel schedules, unpredictable and sometimes mediocre finishes, annoying mechanical problems, and laughable paychecks. But the focus on a goal– to represent the US in the Olympics– drives these athletes to overcome enormous obstacles that the casual rider has a hard time even imagining.

Off Road to Athens is yet another great film from the director of 24 Solo that you won’t want to miss. It’s about mountain biking– which is fun– but most importantly it’s about courage and dedication to a sport that all too often goes unnoticed. If watching this film doesn’t make you want to get off your ass and ride, nothing else will!

You can purchase Off Road to Athens and pre-order 24 Solo (shipping June 1!) online at offroadtoathens.com.