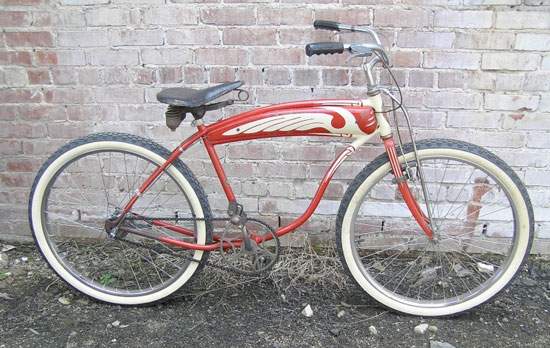 First Flight bikes in Statesville, NC (about 40 miles north of Carlotte) is dedicated to preserving the history of mountain bikes and recently opened MOMBAT, the museum of mountain bike art and technology. The museum has more than 400 bikes on display including an original 1981 Specialized Stumpjumper, the first mass produced mountain bike. Apparently there is also an ’81 Stumpjumper on display in the Smithsonian in Washington, DC – how’s that for MTB history?

MOMBAT showcases 250 mountain bikes and visitors can see the evolution of frame materials, suspension systems, and drivetrains through the years. They also have tons of vintage MTB parts on display and thousands of pieces of MTB product literature, catalogs, and magazines from back in the day.

In 2009 mountain biking will officially celebrate its 30th anniversary making next year a great time to make a pilgrimage to the new MOMBAT. If you can’t make it to Statesville, you can view most of the bikes on display on the MOMBAT website. I’ve already spent the morning combing the archives and found some pretty amazing and unique bikes including a 1948 Schwinn Majestic Klunker, the 1982 Specialized Stumpjumper, and a 1980 Breezer Series II built up by Joe Breeze himself.

One thing that’s amazing about these bikes is that no matter how old they are, they all still look like mountain bikes in one way or another. Mountain biking technology has changed dramatically over the years but even modern mountain bikes can trace their roots to these Klunkers and early models. It’s also incredible to see companies like Specialized are still around and pumping out the latest and greatest MTB tech. Long live the mountain bike!