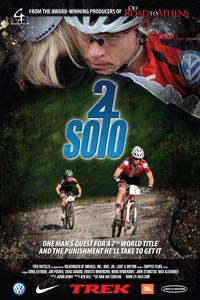 Believe it or not there are things happening in the MTB world that have nothing to do with Interbike this week.

Chris Eatough is retiring. Yep, the man who won six straight 24 Hour Solo championships will call it quits after racing 24 Hours of Moab this month. Eatough has been a professional racer for 10 years and his retirement plans call for working for sponsor Trek doing product testing while offering coaching services on the side. The highly recommended movie 24 Solo features Eatough and his attempt at a 7th straight 24 Hour Solo title that takes place at the 1996 Olympic MTB course outside Atlanta. We’ll miss you Chris!

Trek working on Chicago Olympic bid. President Obama isn’t the only heavy hitter working to bring the Olympics to the Windy City in 2016 – Trek Bikes is doing a little lobbying and planning of its own. Chi-town’s Olympic plans call for cycling events to take place in and around Madison, WI including MTB events at the Tyrol Basin ski area which Trek officials helped scout for the committee. We’ll keep our fingers crossed!

10 day MTB stage race in the Himalaya. The Hercules Mountain Biking Himachal claims to be the third toughest mountain bike race in the world after Trans Alps and Trans Rockies but I’m not sure how official that claim is. Everything is tougher in a third world country where access to simple things like clean drinking water can be a challenge and the fact that only 12 of the 70 competitors are from outside India tells you something about the difficulty of this race.

The route is quite tough and passes through trails on lofty mountains and gurgling streams. The expedition will not only enable the participants to test their skill, strength and spirit but also enable them to enjoy the countryside beauty of the state.

Plus, any race that also bills itself as an “expedition” has gotta be a real challenge 🙂