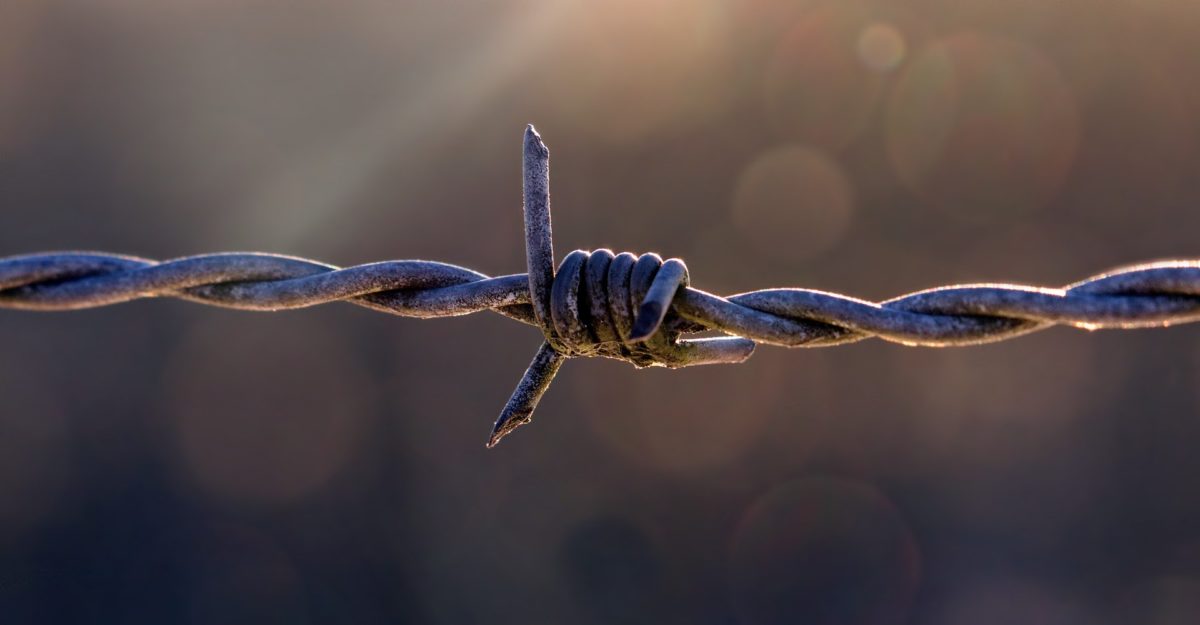 Update July 11, 2017, 10:25am MDT: Reports of a Mountain Biker Clotheslined by a Barbed Wire Booby Trap Met with Suspicion from Local Alberta Riders

The rider, Stelios Psaroudakis, says he believes the barbed wire was strung up intentionally as a booby trap. It was attached to a tree on either side of the trail, strung across at neck height, and located at the bottom of a hill and around a corner.

“They’re malicious. They’re trying to kill somebody. This is like attempted murder,” he said. “If it was like … an inch higher, it would have taken my head off.”

According to the report, when Psaroudakis hit the the wire, it clotheslined him and threw him backwards off his bike. His friend, riding about 15 meters behind him, reported seeing his head snap all the way back. When his friend rode up to him, “he was crying. . .because he thought I was dead.” Psaroudakis also suffered a badly bruised back, internal bleeding, and a lacerated liver, from landing on a rock.

They went to the emergency room as fast as possible, leaving his bike behind at the scene. The next day, the $8,000 Specialized Stumpjumper FSR was gone.

According to Canada Police Report:

The Cochrane RCMP are asking anyone with information about these events to call the Cochrane Detachment at 403-932-2211. If you want to remain anonymous, you can contact Crime Stoppers by phone at 1.800.222.8477 (TIPS), by internet at www.tipsubmit.com, or by SMS (check your local Crime Stoppers [www.crimestoppers.ab.ca] for instructions on how). You do not have to reveal your identity to Crime Stoppers, and if you provide information to Crime Stoppers that leads to an arrest(s), the recovery of stolen property, and/or a seizure of illicit drugs, you may be eligible for a cash reward.

Chris, the go fund is noted on Pink Bike.

This is REALLY messed up. Scares the hell out of me.

I hope the person(s) that found and ton his bike see the story and take it to the RCMP. As much as I’d love the bike myself, I couldn’t in good conscience keep it. These bikes cost way too much to claim someone else’s rig. You would have to know it was abandoned for a really good reason. I guess just because I have a conscience, doesn’t mean the person that has it does.

Remember gofundme takes a pretty sizeable % of all donations. A friend’s sister used gofundme for funeral expenses when her brother passed away and she got stuck with a lot of extra expenses because they claimed…I think it was about 40% of the donations which would have covered her costs. Pretty messed up but she had to start another campaign just to cover the funeral.

I was riding an saw a rebar sticking out of the middle of the trail. It was about 3 to 4 inches exposed. CLEARLY a booby trap.I stopped and removed it. People are INSANE

Who steals a 9 year-old turd gold stumpjumper? Would be more maintenance hassle than the bike’s worth. I guess the $8,000 claim is for insurance purposes.

Guy also had a dog in his backpack? This story just keeps on surprising.

Hey Greg, I’d take this story down until all this info is confirmed. Sounds like this guy might be a scam. He is known for making fake GoFundMe campaigns. And non of this story is really adding up. Barbed wire would not leave a scar like that, nor that bike worth $8K.

As far as this guy’s claims, it will be interesting to see what happens. It sounds like the police are treating this as a crime and even CBC seems to be standing by the story.

After reading what the locals are saying, I’m inclined to think this is probably a scam.

Sorry, don’t take the story down, thats not what I meant. Perhaps just adding “Apparently”, “Reportedly” or similar to the title would help.

Jeff, check out the comments on : https://nsmb.com/articles/riders-throat-sliced-barbed-wire-across-trail/

Thanks! Update published here, and linked from this article: https://www.singletracks.com/blog/mtb-news/reports-mountain-biker-clotheslined-barbed-wire-booby-trap-met-suspicion-local-alberta-riders/

The trails in West Bragg Creek are very popular. Not sure where this alleged accident actually happened at WBC, but it is supposed to of occurred at 8-PM. This means the people on one trail just before the incident either, set the trap or ignored the trap. Or there is another alternative…

I crashed on Merlin on 20-Jun-17 and have not been able to ride since. The GPS showed 33-KM then 0-KM this when I went over the bar straight into the ground. I could barely breath or walk. I was on my own and there was absolutely no way I’d leave my bike. I struggled out and drove to the hospital.

Thanks for the comments!