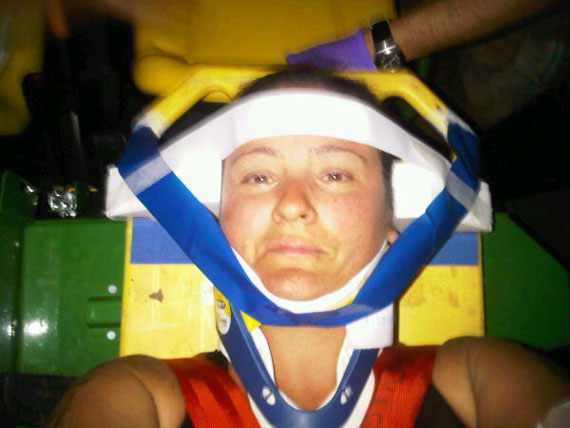 According to internal surveys, only 11% of singletracks members are on Twitter now – but perhaps that will change once you hear Leigh Fazzina’s story. Fazzina was competing in an off-road triathlon in Connecticut last week when she got lost and found herself far from the main trail. On a downhill section she hit some roots, crashed, and couldn’t get up on her own.

Good old fashioned yelling didn’t help – she was too far from the other racers for anyone to hear her. Fortunately she had her cell phone on her but voice calls didn’t go through. She was, however, able to connect to Twitter to send out an emergency tweet – “I’ve had a serious injury and NEED Help! Can someone please call Winding Trails in Farmington, CT tell them I’m stuck bike crash in woods.” (that’s 138 characters for those keeping count).

Within moments several of her 1,000+ Twitter followers, some as far away as California, sprang into action and contacted local authorities. Fazzina was eventually rescued, bringing a happy ending to her off road emergency. She even recorded a short video on her cell phone as she was wheeled away to the ambulance (watch here if you’re interested). What can’t cell phones do?

When I first read the headline I thought the story sounded a little fishy – why wouldn’t someone just use their cell phone to call 911 instead of Tweeting? However, according to a cell phone expert quoted in this USA Today article, it’s not unusual to be able to send a text message in areas where there is no voice coverage. It’s not clear whether Fazzina sent a text message to her Twitter account or whether she connected to Twitter via her phone’s internet connection. Either way, it’s good to know there’s more than one way to use a cell phone to get help in an MTB emergency! Start collecting Twitter followers now, you never know when you’ll need ’em. 🙂