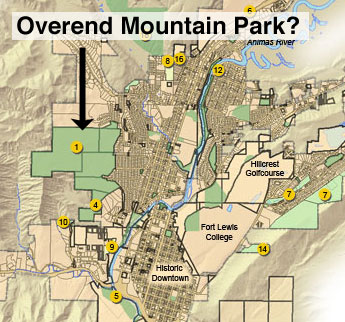 Durango Mountain Park is poised to be renamed after one of mountain biking’s biggest names: Ned Overend. The Durango, CO resident was the first MTB world champion in 1990 and won the NORBA championships every year but one from 1986 and 1992. Today Overend is a product developer for Specialized and is one of the living legends of our sport. Here’s what he had to say about the prospect of the park being named Overend Mountain Park:

(Trails 2000 founder Bill Manning and others are) the unsung heroes here. It could easily be Manning Park. To me, it’s a real honor.

The park itself features 7 miles of singletrack spread out over 300 acres below Perins Peak. Overend and Ed Zink, owner of Mountain Bike Specialists, sold land to the city at below market values to help expand the park. But Overend and Zink want to share the park with all Durango residents, even non-mountain bikers.

It’s really important that mountain bikers don’t think they own the trails. I’ve run into some who don’t watch their speeds or watch out for others.

An article I read said Overend has even asked other riders to slow down on the trail (and that’s something coming from one of the fastest ever!). We’re stoked to see this trail named for such a humble and generous mountain biking legend.

He definitely is a legend! No one more worthy.