Back in mid-March, Bell Helmets and IMBA selected 9 candidate projects vying for some downhill cred from 3 regions: West Coast, Central, and East Coast. They submitted their plans, pleaded their cases, and left it up to you, the people, to decide. Now, after 6 weeks of bandwagoning, the field has narrowed to one finalist from each region battling for your ballot in a similar online vote being held now through June 4 for the grand prize of $100,000 in technical assistance granted by Bell Helmets to fund a black/double black diamond gravity trail built by IMBA Trail Solutions and the host of volunteers at the forefront of the winning project.

West Coast: It seemed from the get-go the Alsea Falls, OR project never stood a chance during West Coast voting and… well… they didn’t. Votes for Exchequer, CA and Sky Tavern, NV took off faster than a new MTB industry standard and remained neck and neck until the promising Mariposa, CA project pulled away in the home stretch claiming the win by a mere 433 votes. And that’s a tiny margin considering a total of 26,133 votes were cast for the entire West Coast. Of the hard fought win, Grant Parker of Exchequer Riders Club said, “Regionals was a tough battle with Sky Tavern being an amazing competitor. They pushed us hard and our community rallied together in order to pull out a win.”

Central: The Red Rock, NM project was to the Central Region what Alsea Falls was to the West Coast – virtually non-existent, receiving about 5% of the overall vote. Having two candidate projects within the same state, New Mexicans knew what they had to do in order to compete with Spirit Mountain, MN even if it meant sacrificing one of their own. Nevertheless, the Duluthian force remained strong and undisturbed as Spirit Mountain went on to take the Central Region over Cedar Creek, NM 6,035 votes to 5,316.

East Coast: This time it was the Timber Trail, AL project that would follow Alsea and Red Rock to a loamy grave collecting a fraction of the East Coast ballot. Within a few days, Gorges, NC and Knoxville, TN leaped out in front reaching over 1,000 and 3,000 votes, respectively. More votes would trickle in over the days leading up to the final tally, but the ratio remained steady and Knoxville went on to collect the win. 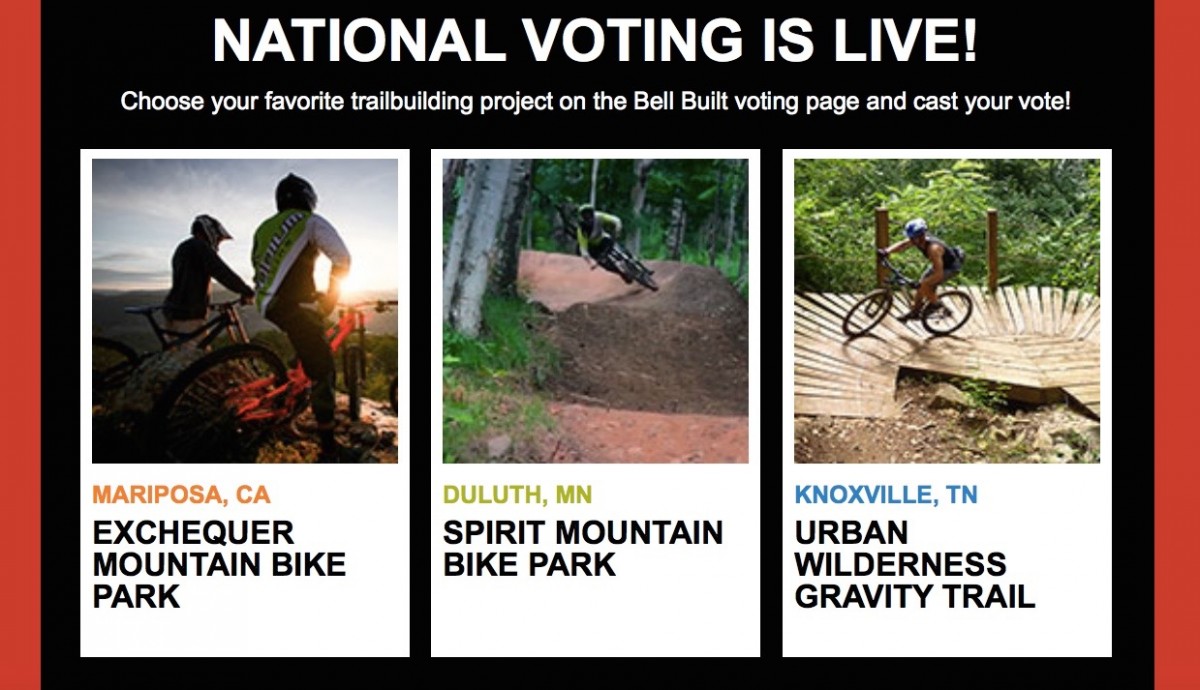 WHY EXCHEQUER MTB PARK SHOULD WIN

I remember back in high school when my friend and I started bar lacing our shoestrings only to be informed by “that kid” that Californians had already been doing it now for a couple of years. Jeez, does everything new and “in” come from California? Well, at least most of us can agree mountain biking started there and, like cutting edge innovations in shoe lacing, we followed that trend, too.

A Surprising Twist in Trend

Over 26,000 cast their vote during West Coast polling which was more than twice the votes for the Central Region (12,002) and four times as many as the East Coast (5,962). Exchequer and Sky Tavern alone accrued more votes than the entire Central and East Coast regions. Based on these figures, a united West Coast vote could theoretically break Duluth’s Spirit and unroot the East. However, as the first of two weeks of final voting draws to an end, we see a reversal of this trend as Knoxville’s Urban Wilderness Gravity Trail has taken a strong lead followed by Spirit Mountain in second and Exchequer, currently in last place.

Disneyland, San Fran, Yosemite (Sam), where mountain biking began… The reasons to visit California are as numerous as the references in a certain Billy Joel hit. I’m not saying you’re going to bore yourself of shredding 700 acres of California’s only purpose-built track designed with every rider in mind (including the disabled), but you’ve got some pretty great options for making Exchequer part of a larger vacation. Yosemite National Park sits less than 2 hours to the east, offering a nice way to prime the pump on your way in. Not only that, after a thorough thrashing, San Francisco is just a couple hours to the west. With a full-service recreation site serving as the access point to Exchequer equipped with tent and RV sites, small cabins, house boat rentals, and watersport vehicles, you don’t even need to leave Mariposa County to enjoy a multi-day trip to the MTB park.

More Than a Downhill Park

Like all of the candidates in this year’s Bell Grant, the Exchequer endeavor has a master plan that includes more than an advanced downhill run. In fact, with 50-60 miles in the works, the black diamond addition will represent a very important, but small piece of a larger effort to welcome all levels and types of riders, one of which supports disabled riders who use a quadricycle, tricycle, or hand cycle.

“Disabled Mountain Bikers have very few trails they can ride and even fewer that are built with them in mind,” says Exchequer Riders Club, Grant Parker. “The goal for the park is to be a place where all riders of all abilities can get out and pedal.” Outside of the Bell contest, you can help Exchequer raise funds to develop the initial 1.5 miles of adapted trail and, depending on the popularity, more will be built.

“Any project that puts more trails in the dirt,” says Parker, “is a worthy project.” All 9 contestants in this year’s contest are more than deserving of some Bell/IMBA trail love and it is evident from individual project’s land managers, trail builders, volunteers, and community support that plans will move forward regardless of the contest outcomes.

Final voting runs May 27 – June 4. Show your support by voting for this year’s Bell Built winner.