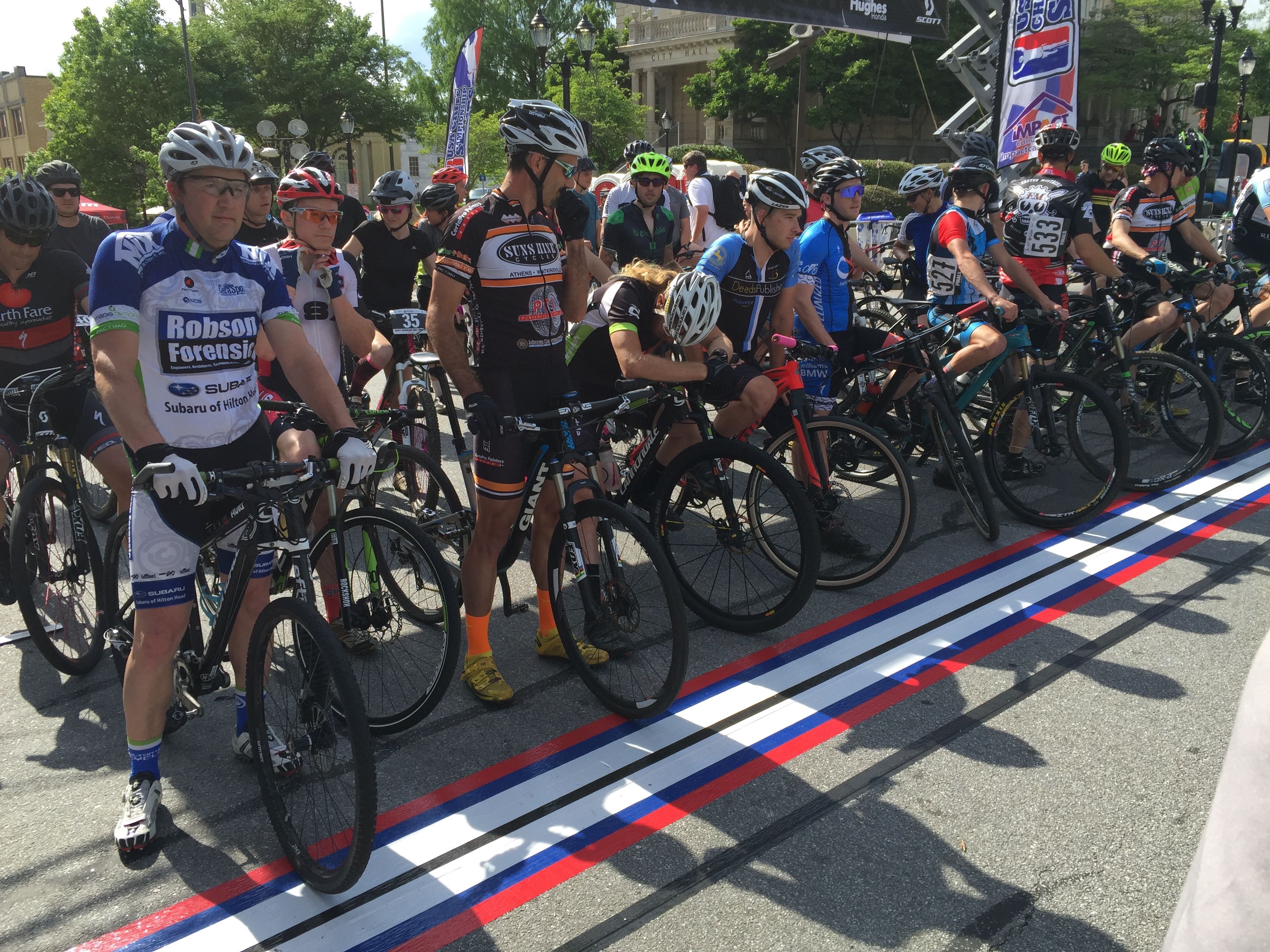 There’s nothing cyclists love quite like mixing disparate pieces of their culture for dubious reasons. That’s why, when someone came up with the idea of adding a MTB Crit to the Athens Twilight weekend of bike racing, the sport of cycling responded with a resounding, “Sure, why not?” That’s how cycling should be, after all: silly, incomprehensible to outsiders, and dangerous to life and limb.

I traveled to Athens, GA, site of this planned “MTB Criterium” race to do journalism at it and to discover whether or not they still serve beer in Athens. Spoiler: they do. 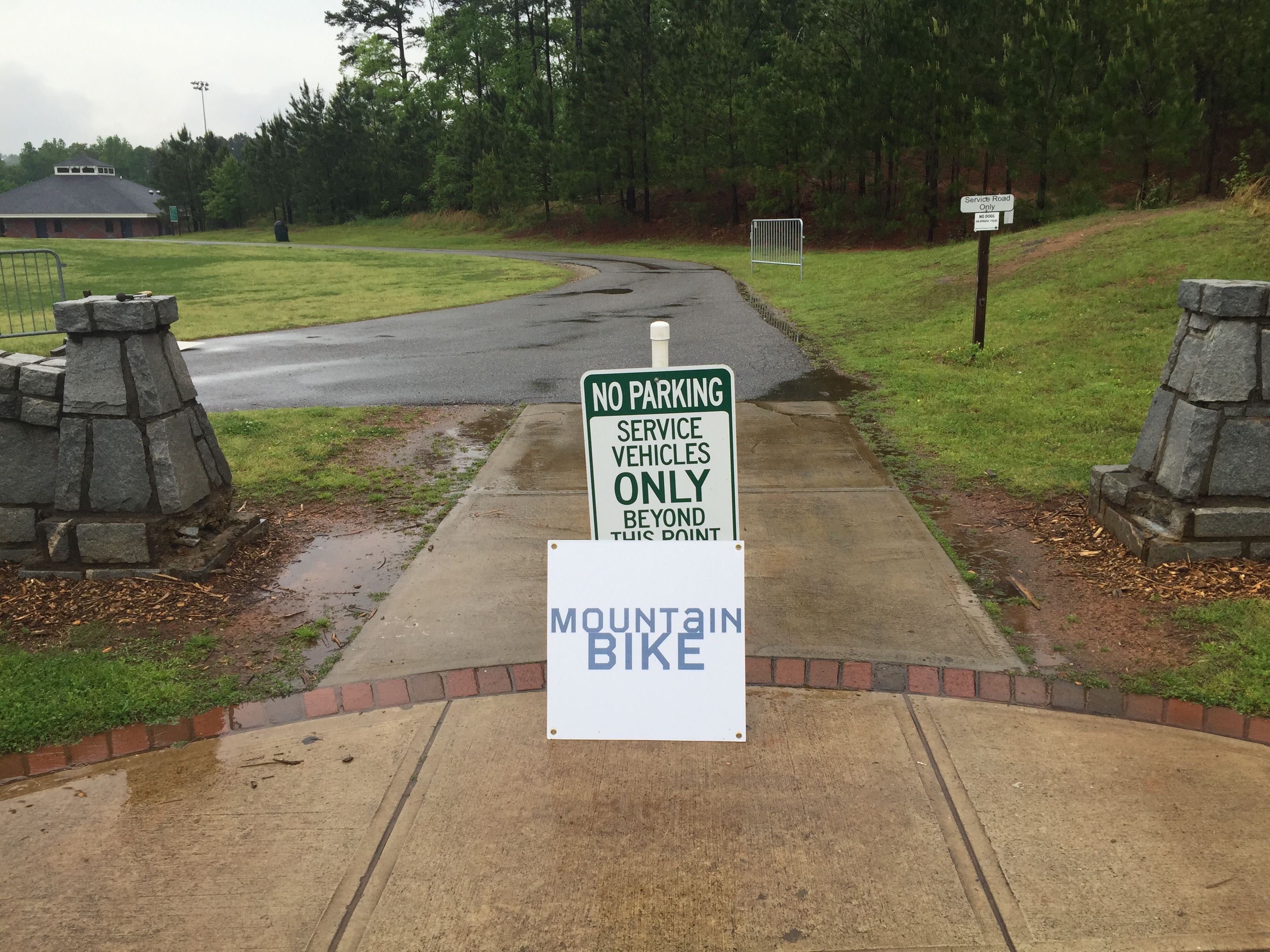 Don’t be ridiculous. You can’t just chuck a knot of cyclists and their mountain bikes onto a race course, shout “Go!,” and see what happens. First you have to qualify them by means of a pre-race race, in this case a time trial.

Readers may recall that on April 13th we respectfully called out Athens student paper Red & Black for their article calling the Trail Creek Park trails the “Largest” in the southeast. Fate held that the Time Trial qualifier for the MTB crit would be at that very same park on those very same trails. At last, I would get to discover the secret of the “quadrupletrack” technology rumored to be under development there.

But alas, a storm rolled through in the morning and the TT qualifier was canceled in order to preserve the trails. Kudos to race organizers for that, the right move.

Thanks to our Singletracks survey we know that a significant portion of our readers ride wet trails. I presume these people also ride their muddy bikes into their mom’s living room and wonder why she’s so mad. 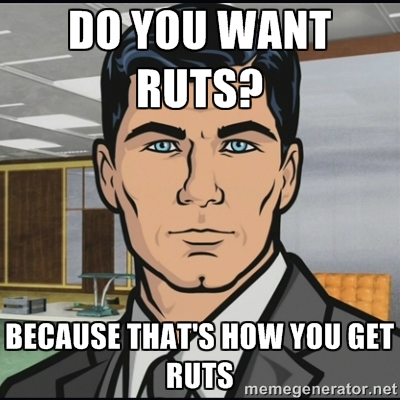 So, instead, the race would just be a bunch of riders on mountain bikes chucked onto the course and someone would shout “Go!” at them.

Of course, humans being what they are, when it came time for the on-road MTB Crit itself, I noticed a few of the bikes were looking distinctly road-ish. We’ve joked about the “skinny tire mountain bike” a few times, but that prophecy has now come true. 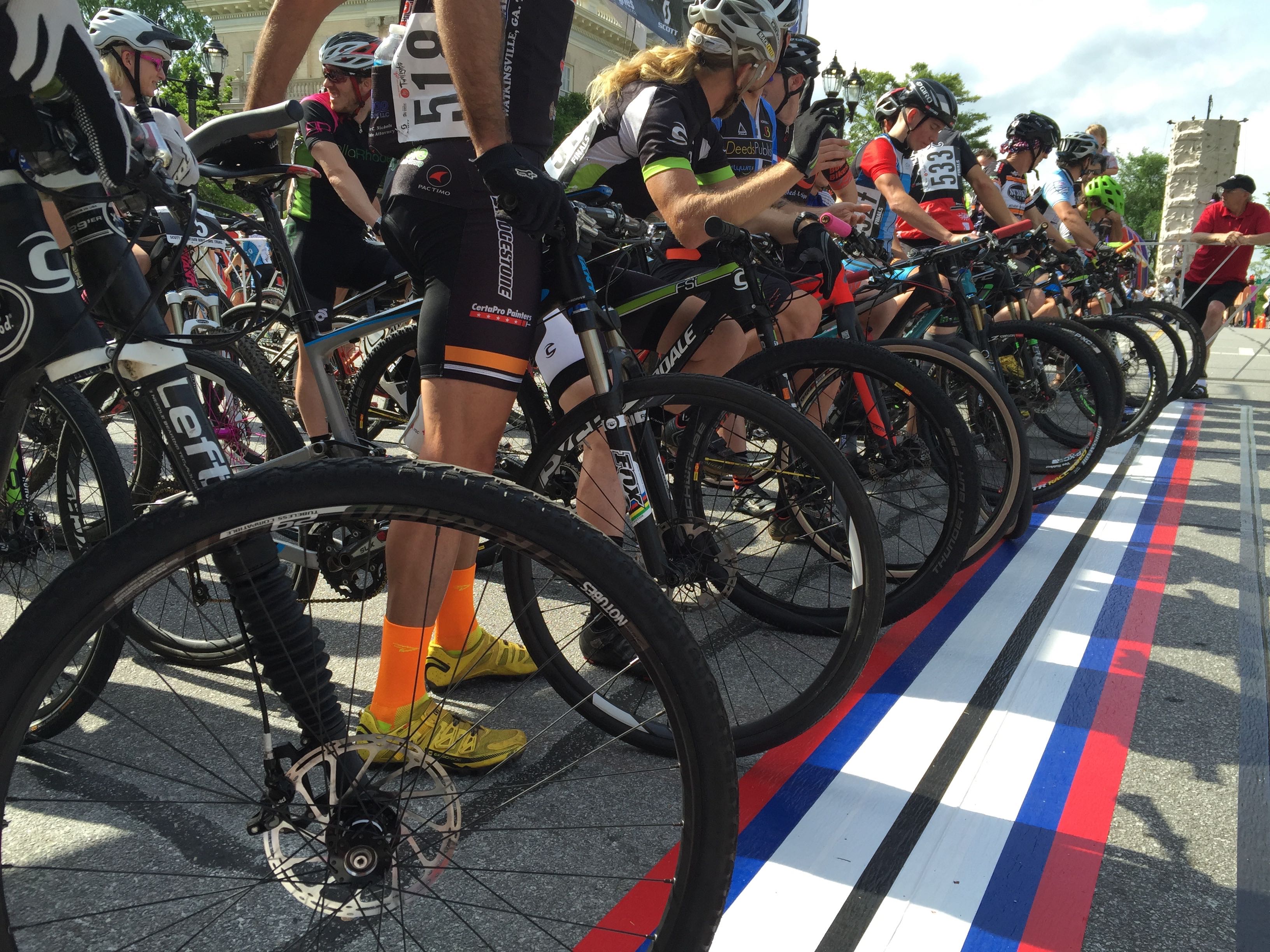 Okay, sure, if you’re going to race you might as well give yourself the best tools for the job, but is it really still a MTB crit if you throw on some slick commuter tires? Cries from the assembled riders went up, “Keep the fat tires fat!” Upon hearing this, riders with skinny slicks looked around as though they were suddenly interested in the scenery.

This intrepid badass’s name is Lara. What kind of tires does Lara bring to the MTB crit? MTB tires. Filthy ones. And pink spokes. And a full suspension bike. Good on you, Lara. 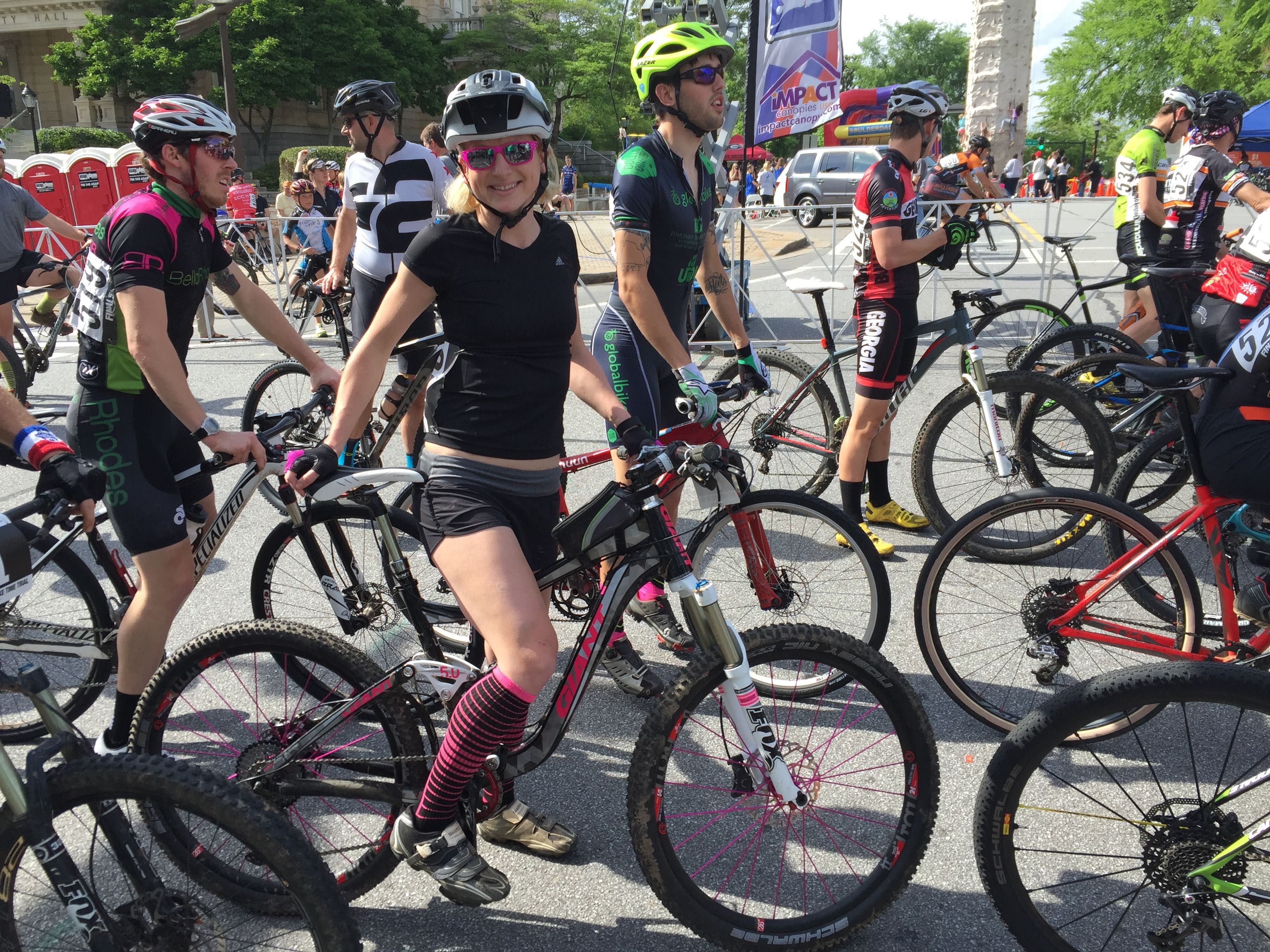 Excitement built as the seconds ticked toward race time. The pace car nosed its way through the crowd of riders and prepared to lead them out. A real photographer’s head accidentally made its way into the frame of my photo. 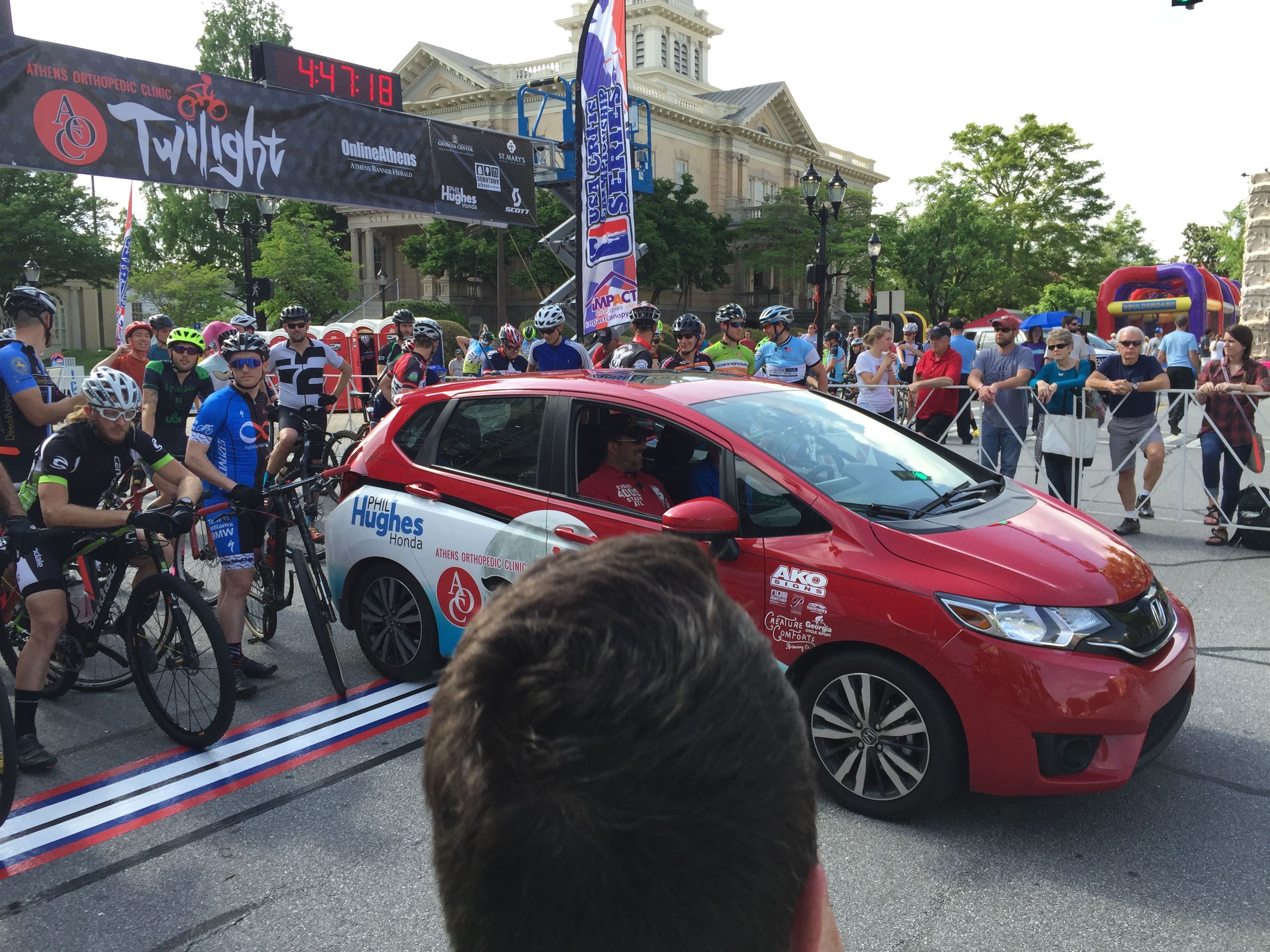 Then, presumably because any idiot can shout “Go!,” a race official blew a whistle, and the riders surged forward like… well, like a bunch of dudes and  two ladies who feel like riding bikes. 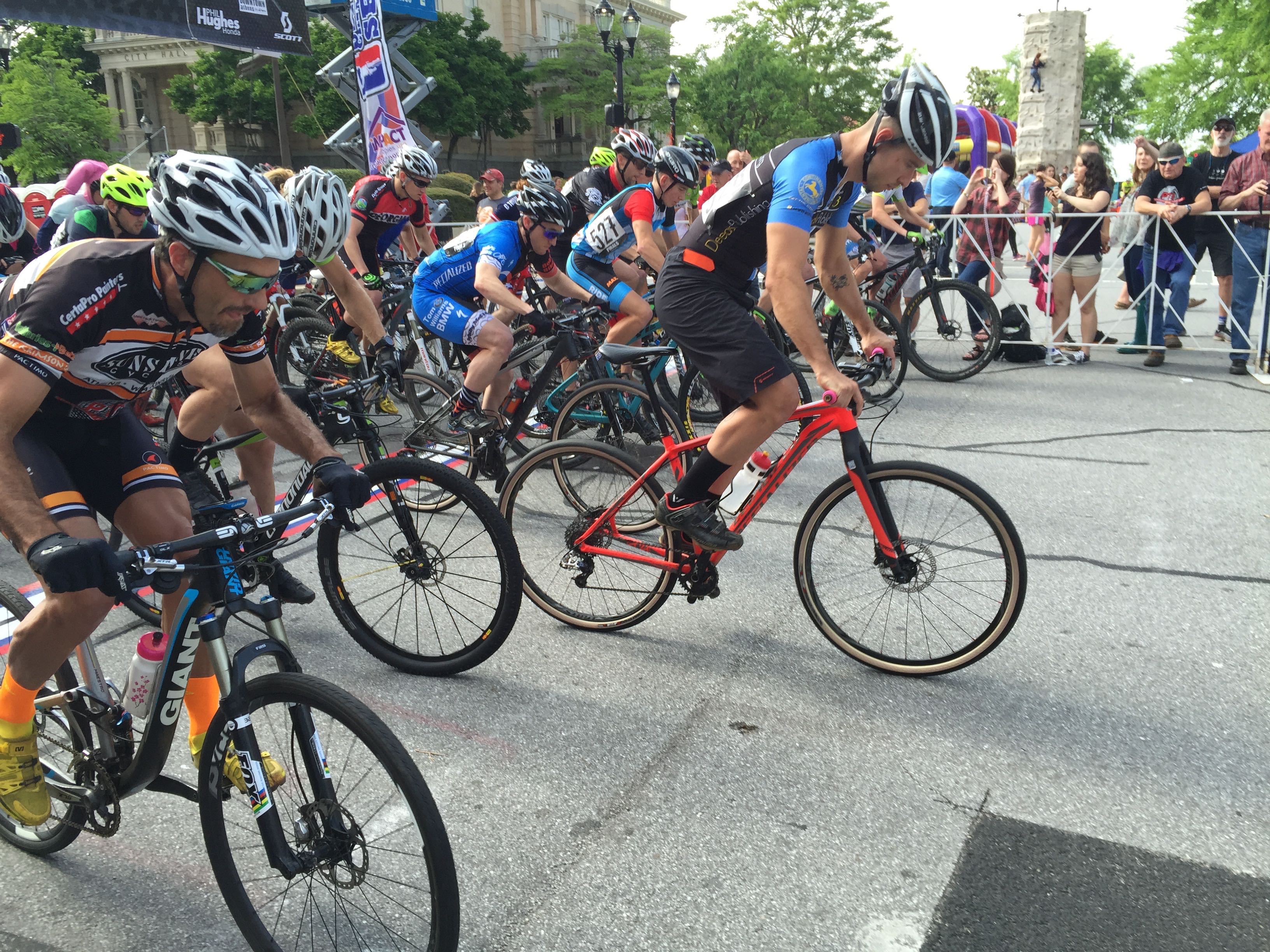 As can be seen in the photo above, a gentleman on what looks to be a rigid Specialized Stumpjumper with slicks on it surged ahead, which, frankly, wasn’t very interesting. Members of the crowd suffered boredom so severe that they considered charging the children’s bouncy castle and taking a nap.

But then, as the peloton pulled away, a savior appeared. He can be glimpsed at top left in the previous two photos, but only when the people serious about MTB criterium racing had gone past was his full glory beheld. The Singletracks MTB Journalism team quickly switched sides of the race course in order to get a better photo of this champion.

Here he is as he reappeared at the start line after one full lap of the course, in long pants, hiking shoes, dressed as Master Shake and gnawing on a slice of pizza. 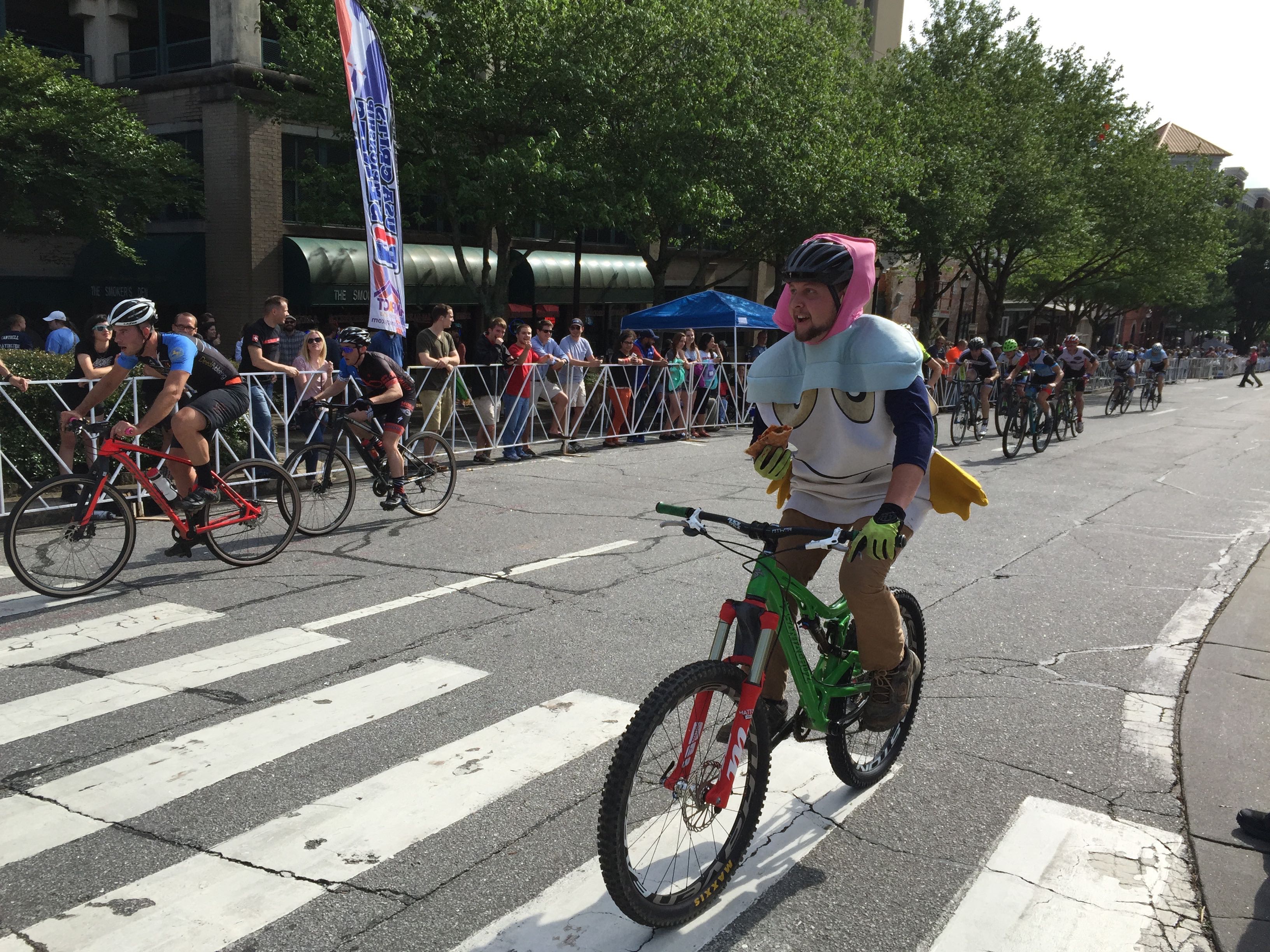 The crowd went wild. Children who’d been bored catatonic — by the sight of grown men with carbon race wheels and the lightest commuter slicks on the market — regained consciousness and cheered. Mystery man in the Master Shake costume responded to this praise by treating the crowd to a wheelie demonstration. As the “serious” riders lapped him, he completed nearly the full length of the front straight using only his rear wheel. 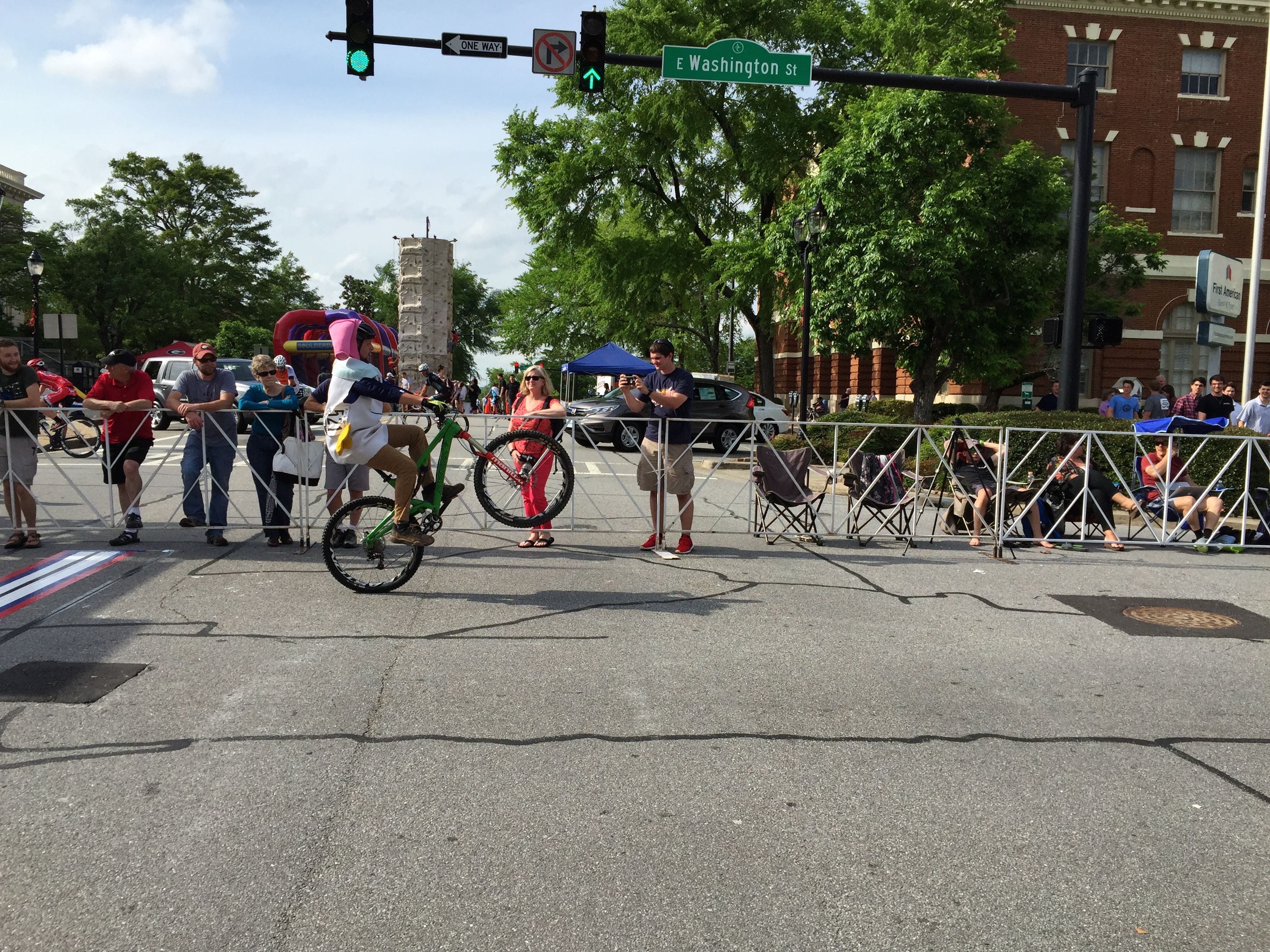 I’d like to be able to tell you that Mystery Shake Man won the race even with his wheelie-ing and pizza gobbling, but that would be a lie. This guy in the Cannondale kit with the ENVE wheels and slicks won the race by a wide margin. We don’t even know his name. The officials didn’t have it and the race results for 2015 aren’t posted yet. 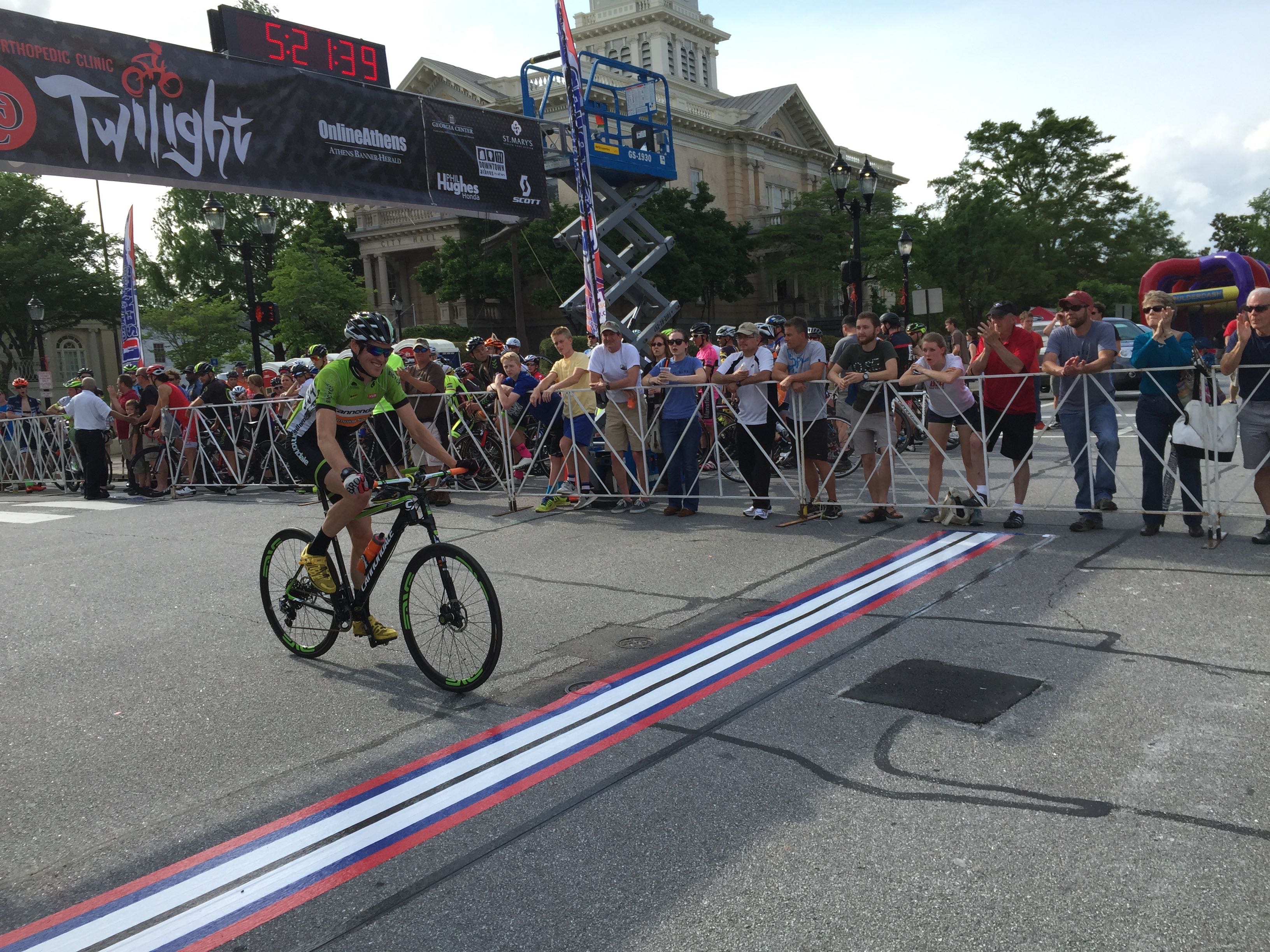 Oh well. Well done that man, whoever you are. He probably has a thriving dentistry practice somewhere.

As Cannondale Man crossed the finish line I turned to the USAC official at the start line and asked if there would be a podium ceremony for the MTB Crit race. He gave me a shrug as though I’d just asked if he intended to put a top hat on a schnauzer.

The Great Shake Down

We waited for Mystery Shake Man to reappear so that we could interview him, but he’d left the course somewhere on the back side. A wild hunt ensued, and at last, many minutes later, the wheelie-ing hero of the MTB Crit was spotted, still in his costume.

“The people came for a show,” he said. “Somebody had to do it.” Truer words never spoken, surely, but the real surprise came when we asked his name, for he was none other than Ethan Quehl, 2008 Jr. Expert Downhill National Champion and local trail building expert from the Trail Creek Park article.

Good on you, Mr. Quehl, Lara, and all the rest who brought a little mountain bike fun to the road racing this weekend. As for the rest of the riders with the slick tires and the grim determination, well, good on you too. But maybe at least throw a costume on next time, would you?

The least you could do is dig out the All Hail the Black Market jersey you have lying around somewhere, right? 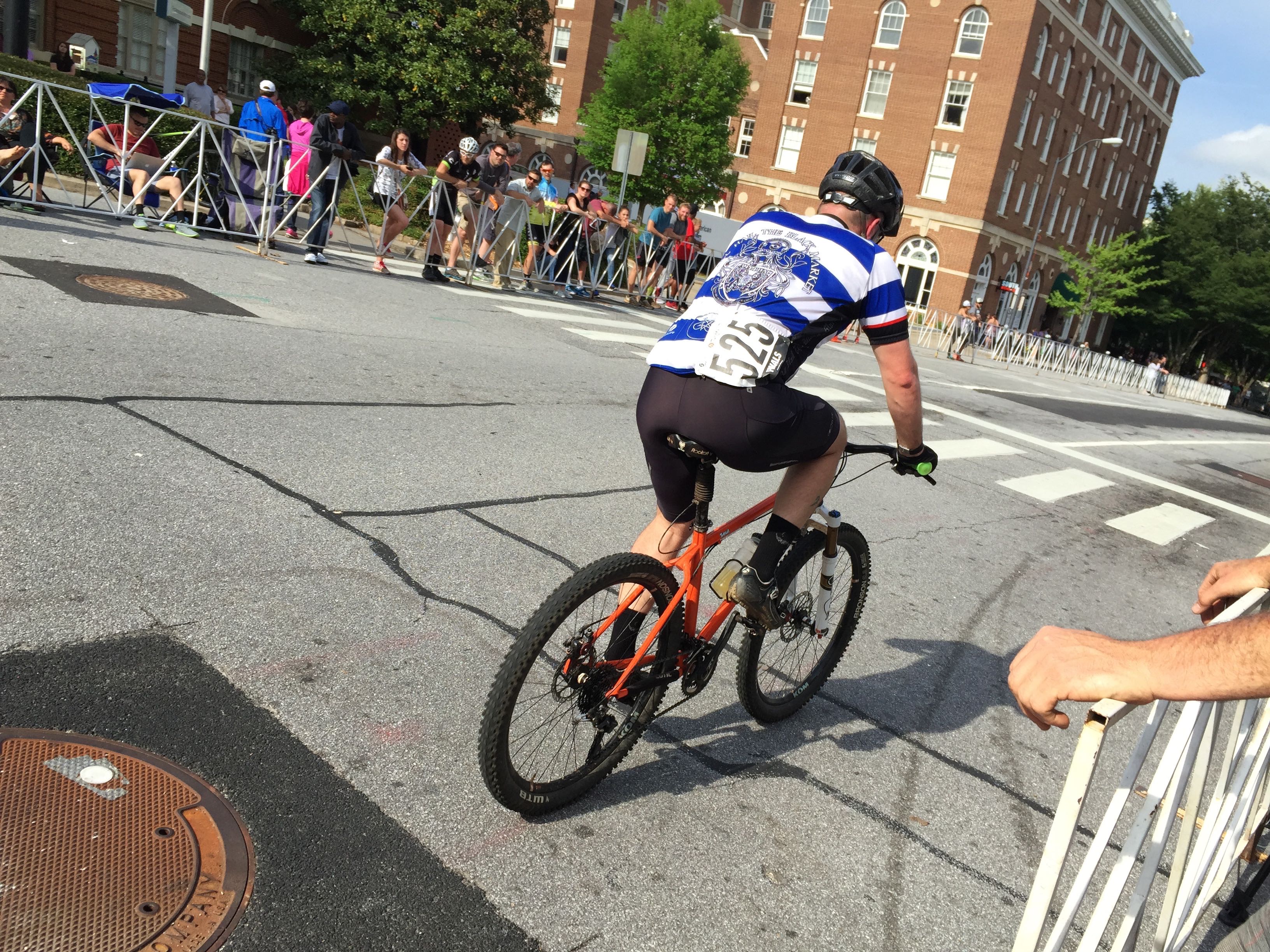 Excellent journalism sir. I hope you were able to compare notes with the Red & Black reporters assigned to the event.

This years Twilight was pretty disappointing compared to most. Some of it may have been the horrible weather we never got.

Wait, so the mountain bike crit took place on a paved road? Pure genius. Glad at least a couple of the riders had fun with it!

Thats all Twilight is about Greg, fun. There may be a little racing going on, but especially in the MTB crit, it’s more about the spectacle. The qualifying time trial for the race is done on actual dirt, but all the races take place right down town. They block off the course from traffic, put up a couple stages and hordes of street vendors, then have at it. It’s generally really fun, and at night when the main criterium takes place (hence the name Twilight) some of the racers even deck themselves out in LED lights and fly by like a TRON speeder. You are so close to the racers as a spectator, the sound and wind blast from a hundred cyclist roaring down the street in front of you makes for an impressive spectacle to the cycling initiate. Plus every down town festival in Athens has it’s own cool vibe, and the Twilight is really more of a town wide festival event than an isolated bike race.

Kudos to those guys, then, as “racing mountain bikes on the road” and “fun” would never enter my mind at the same time.