Today Trek officially unveils the Supercaliber, though those who have been following the brand closely are already somewhat familiar with the new bike. Now it’s time to cut through the speculation, and get straight to the facts. 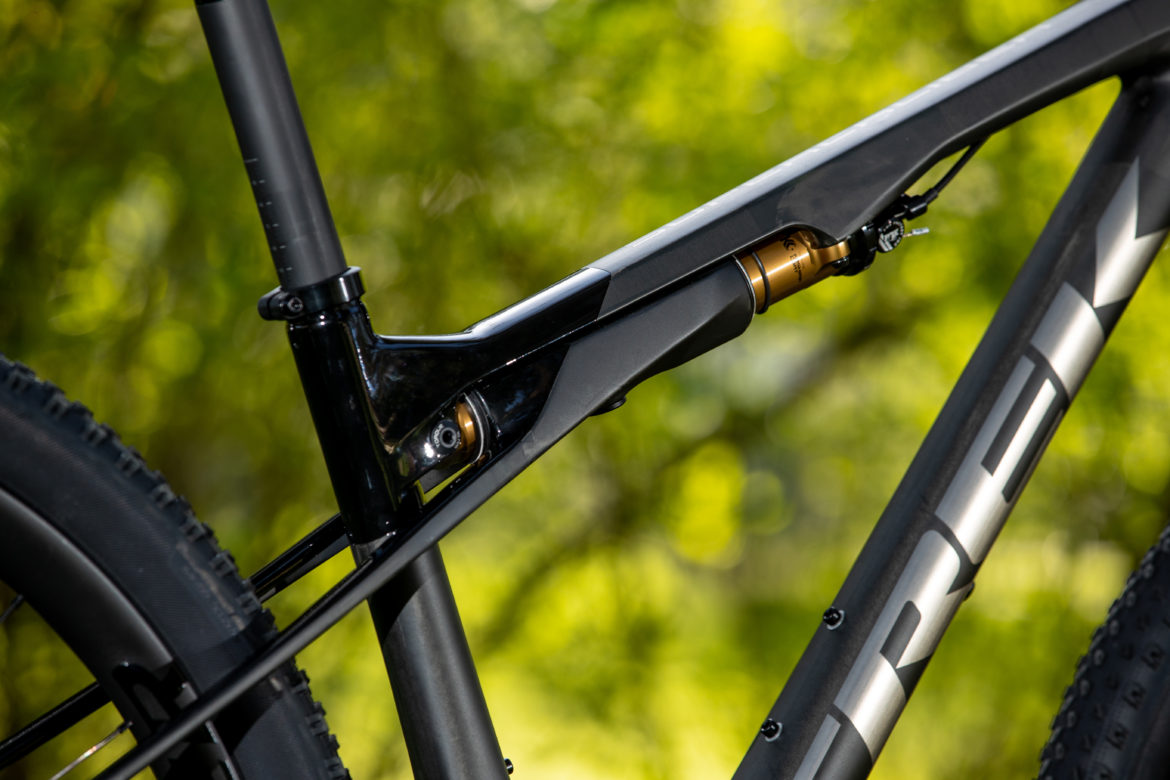 Trek says the Supercaliber is “Not quite a hardtail. Not just a full suspension bike.” Despite soft tail design hallmarks like pivotless seat stays and the lack of a linkage, Trek says the Supercaliber offers 60mm of rear travel by way of an IsoStrut, which is basically a shock that’s structurally integrated into the frame. The rear suspension is both damped and tunable, and a remote lockout makes on-the-fly adjustments possible. 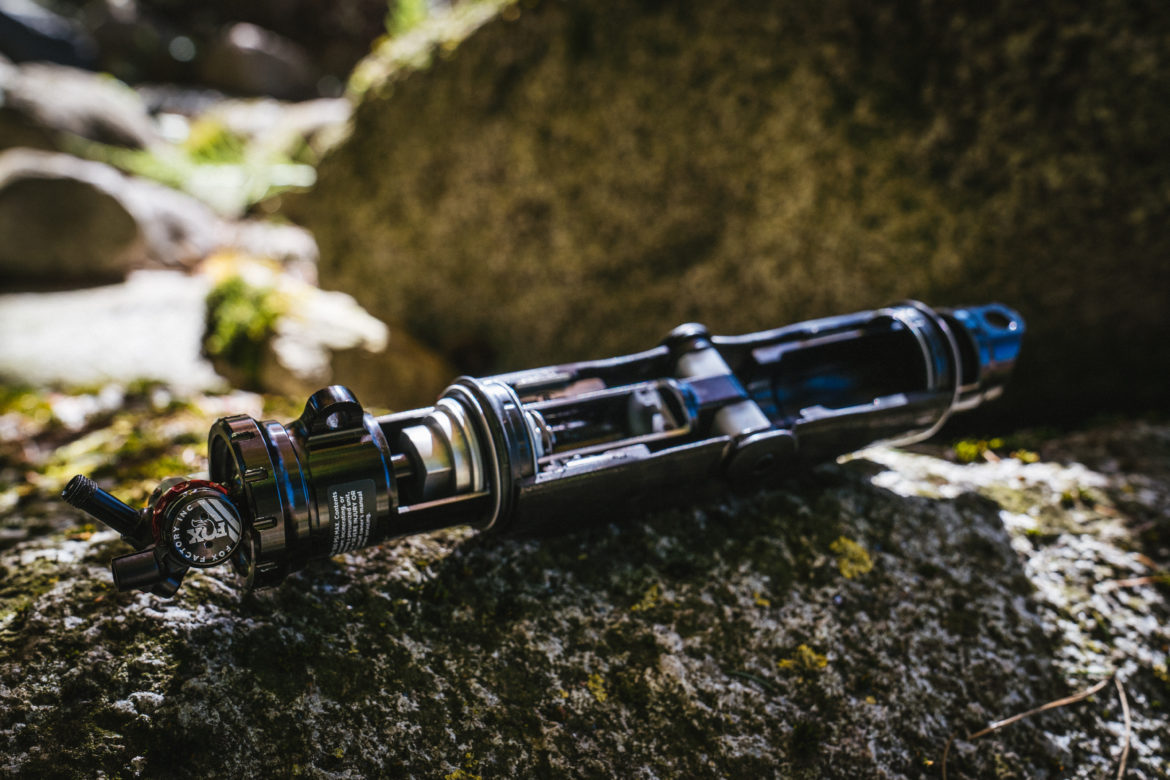 The IsoStrut is easily the most unique and recognizable aspect of the new frame, and Trek says the structural nature of the design improves lateral stiffness since it removes the need for a linkage. Not only that, the linkage-free design cuts down the overall weight of the bike. At 1,950g the frame and shock combo isn’t the lightest available, but it’s certainly competitive. 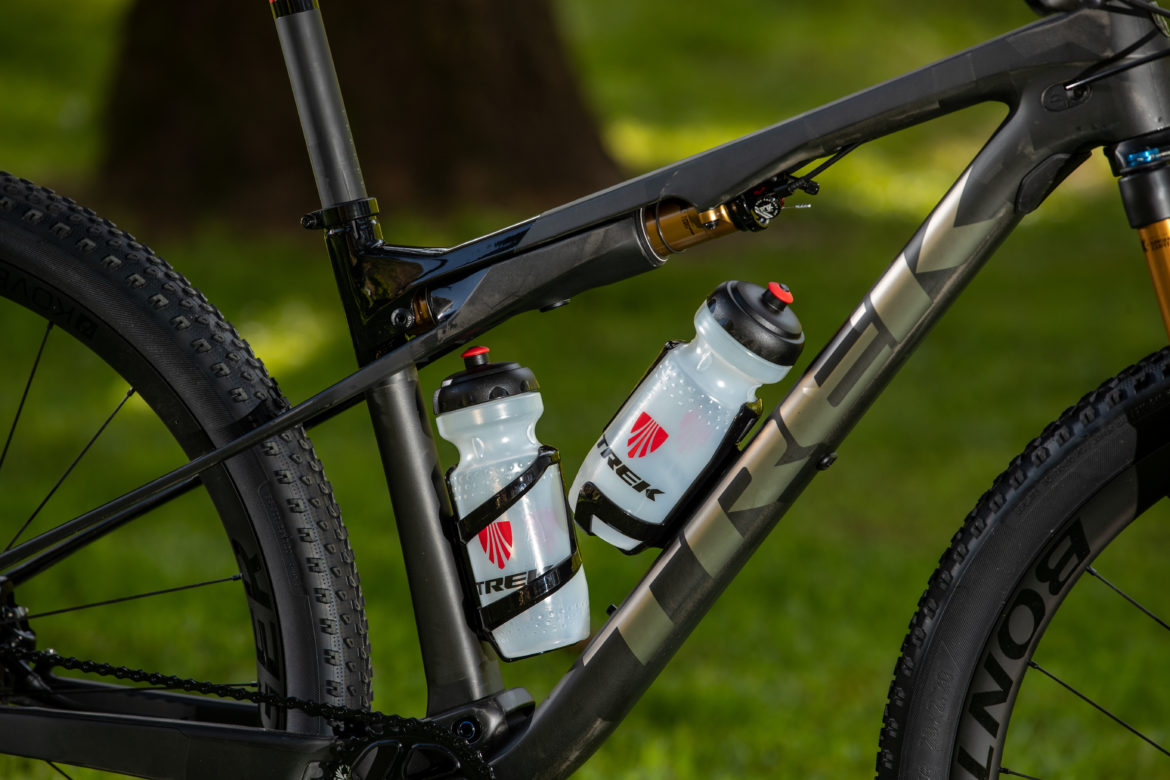 Thanks to the tucked-in shock position, Trek managed to squeeze two water bottle mounts inside the front triangle which is rare for a full suspension bike.

The frame can accommodate up to 2.2-inch-wide 29er tires, though not a front derailleur. For some dedicated XC racers, this might be a deal breaker. Fortunately the bike fits up to a 36T chainring for race day. Sizes small through extra, extra large will be available.

Stock builds feature a 100mm-travel fork up front, though it’s possible to run up to a 120mm-travel fork. The 69° head tube angle is just slightly more relaxed than the hardtail Procaliber, but steeper than the Top Fuel. Pricing starts at $4,799.99 for the least expensive build with an NX drivetrain and Reba fork. The top-end build will sell for $10,999.99 with an XX1 AXS electronic drivetrain and RockShox SID Ultimate fork. A frame by itself is priced at $3,699.99. All Supercaliber frames are constructed from carbon fiber.

The Trek Supercaliber will be available starting in November, 2019.

Trails
Passing By: Mountain Biking the Steep and Rugged Trails of...
Trails
Cuyuna and Pisgah Add New Trails, While Utah Gets a...
Gear
MTB Deals to Help Beat the Heat
Progression
Sizing Up or Down Based on Riding Style Can Work,...
Subscribe
Login
Please login to comment
8 Comments
Most Voted
Newest Oldest
Inline Feedbacks
View all comments

Inside a frame of carbon, it hides it’s rear shock.
But when it’s time to climb the hill, suspension you can lock.
With 60mil of travel, rear compliance should really rock.
And from atop the podium, your opponents you will mock!

Not truly a hardtail, not really full suspension.
For cross country racing this is built; Its light weight I should mention.
Spy photos and good debate have garnered some attention.
Is it a modified hard tail or small dual suspension?

Sorry, I’ll get back in my box.

Haha, this is great!

I am profoundly interested in this bike but not as an XC-Race bike. Imagine putting a 60mm travel fork and a set of Gravel tires on this bike and you get a 60mm travel full-sus Gravel bike capable of using up to 29×2.2 Gravel tires. Now that’s the Gravelbike that I want! Trek just invented an excellent way to provide rear suspension to Gravelbikes.

In fact, I wouldn’t mind having this bike just the way it is. Mount Gravel tires and use it as a Gravelbike. Mount aggressive Mountain tires and use it as a Trailbike. I wonder if 2.3 Minion DHR’s would fit on the rear? To bad the bike didn’t come with rear clearance for at least 2.4 tires. It also would have been nice it there was a more affordable version. Maybe with aluminum wheels and an aluminum front triangle.

Litespeed already has this type of bike, just not in carbon layup.

The Litespeed does have a similar-looking design, though theirs uses a coil spring instead of air which means it’s not really tunable. I would call the Unicoi a soft tail, and even Litespeed says it’s not a FS bike (they use the word hardtail, but IMO that’s not right either). Unlike the Trek, there’s no pivot at the chainstay/seat tube connection, and the chainstays are carbon not titanium like the rest of the bike.

Both are really unique designs for sure.

The new Canyon Lux already fits the bill to race both XC and gravel, it’s also lighter and more capable than this bike. I bought it to race things like BC and Kanza. Plus a top build is so much cheaper than this over priced Trek, and it takes up to a 2.35 tire. No need to look further for a gravel bike slayer than the Lux IMHO. Yeah, you can also get 2 bottle cages in there, and run a 38t chainring… Wins all around!

Freakin’ hilarious! Love your take on that tune????