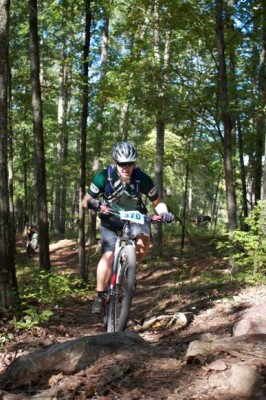 I’ve been a serious mountain biker for a little more than 6 years now. I enjoy exploring new trails, traveling the country, and pushing myself and my bike to the limit. I always try to improve my times and my technical handling skills… but somehow this continual progression has not led me to the competitive realm of mountain bike racing.

The Baker’s Dozen 13-hour endurance race this past weekend was the first time I had ever raced my mountain bike competitively. As a serious rider just getting into the racing scene, I thought I’d write up a few random thoughts I had during my first competition (in no specific order): 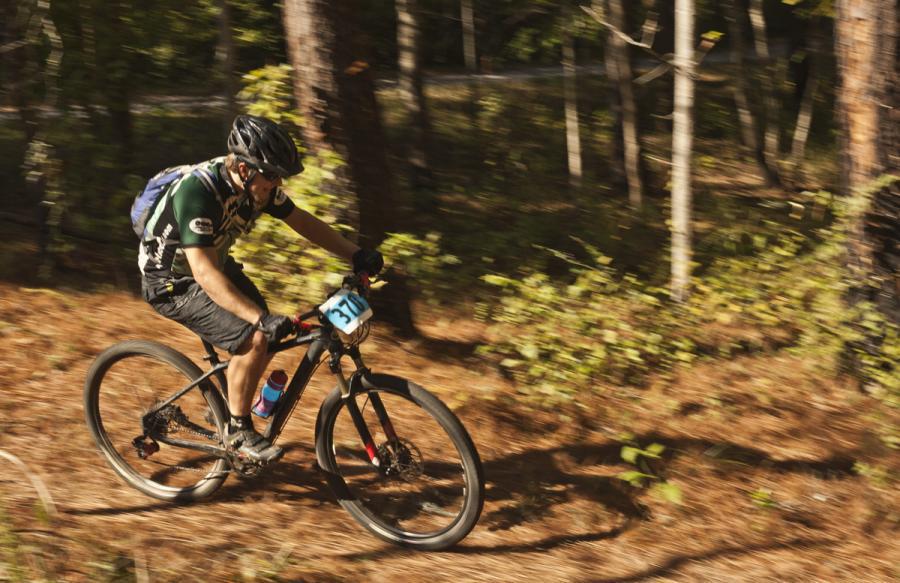 What thoughts do you have about mountain bike racing?

I definitely like endurance races more than XC races. But – everyone should try a XC race at least once, they are a lot fun. Going as hard as you can for an hour or two right on someone’s wheel is a rush! But, the drive time to ride time ratio is all wrong. So try and do one close to home.

And yeah, little amounts of time do add up on a big race. When I do a solo race one of my goals is to keep moving as much as possible, keep stops to a minimum, and keep them short. On races like Fools Gold when I get to a SAG stop often times I’ll grab what I need to eat and head back out on the course pushing the bike and eating. That way I’m still moving, slowly, but at least I’m not sitting still.

Even if you’re not a competitive racer, racing can still be fun if you pick the right event. I love competing with myself more than anything else, just seeing what I can do on the bike. The Bakers Dozen was my first team race and I learned a lot too – #s 5, 6, and 8 were new revelations to me as well!

One of my buddies from Faster Mustache mentioned a modification to team strategy (point #5) and it goes something like this for a 4-man team:

You can switch it up in any number of ways but the point is no one rides two laps in a row and you can still schedule extended rest periods in at certain points.

@Dustin Gaddis, I’d like to try an XC race at some point just for the experience… but yeah, drive time to ride is not favorable

@trek7k, that sounds like a good strategy too! Interesting… maybe we can recruit a 4th person for next year?

One more comment, on #4 – sometimes you can put your all into it and it’s not enough to get you through to the end – especially if riding solo. For example, some of the 2 man teams quit around hr 10 or 11, yet they each rode more laps than we did in all 13hrs.

@Dustin Gaddis, Oh dude, I’m definitely with you! As long as you come out and “put your all into it” I think it’s a job well done!

I was also a first time racer this year as well- participated in a 3-person 9-hour endurance race in the Spring two individual XC races during Summer. All three were quite a lot of fun. I didn’t set huge expectations which helped immensely. I enjoyed the endurance format better but the XC races were certainly not boring either.

Other things to consider:

Go over your bike a couple days before the race, make adjustments and test prior to race day. I was shocked how many people started the races and had all sorts of mechanical issues in the first 10 minutes – flats, broken chains, loose equipment (handlebar, stem, skewer…), hydration hoses gone wild (drained entire contents in ~200′), etc.

Be prepared for traffic the 1st lap. Unless you are a world class sprinter, you aren’t going to beat the field on LeMans starts.

Don’t be complacent… if you are feeling that you can pass, do so at your earliest convenience. I found that sometimes I’d go off into lala land and just amble along behind folks that I should have passed before the trail narrowed and I started getting itchy to pull the trigger at the wrong time.

If you are carry water bottles, pick your spots to grab them carefully. Late in the last XC race, I had a water bottle in hand while rounding an turn and unexpectedly had to hop a log- wasn’t pretty to say the least.

Don’t worry about keeping a bit of extra reserve energy… give it 110% from the beginning.

sounds like fun about how many miles is one lap?

My first race was an endurance race too. I did the 24 hours of COS as part of a 4 man team last year and had a blast! It was my first taste of night riding too which I really enjoyed. We did laps on a 13.5 mile course around Palmer Park which had sections that were easy greens, others that were intermediate blues, and stretches of gnarly blacks too. I pre-rode the course several times leading up to the race to get familiar with the lines and get myself ready to ride it in the dark! The main thing I learned was to start out a little more slowly and pace myself on the first few laps. I went out as fast as I could on my first two laps and really paid for it on the next few. Luckily, I was riding on a team with three other really good riders and they helped me a ton, both with advice and taking a lap for me a couple of times so I could have more time to recover.

This summer I did a 5 race XC series here in Colorado Springs and it was a completely different animal. The first course was really fast with no real extended downhills to coast and catch your breath on. You just had to hammer as hard as you could for an hour straight, it was the toughest thing I’ve ever done! The second course was really technical and tough but had sections where you had to coast down. It was super hard too but I found it much easier than the “easy” course. Each race in the series I found places deep down inside me I didn’t even know I could tap into. It made me so much faster every time I go out now, much faster than what I learned from the endurance race.

Bottom line: both types of races were really fun for me, but very different from each other. I’d highly recommend everyone try at least a little racing because it will make you a much better rider each time you do it. You will find out that what you thought was your 100% maximum effort isn’t even close to what you can really do. And you’ll probably have a lot of fun and meet some like-minded people in the process!