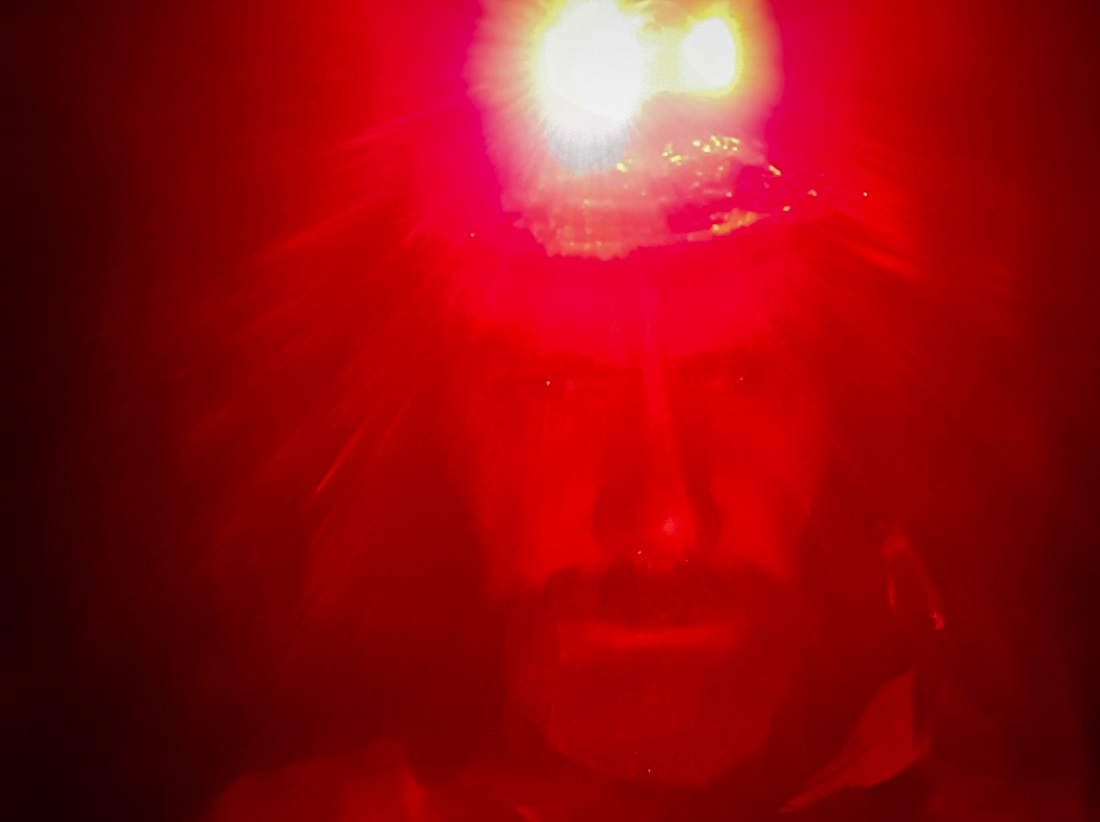 In cold weather endurance riding, survival is the chief concern. In the midst of the 2016 Tuscobia 75, Dallas Wynne, cyclist and member of the Woolly Bicycle Club, arrived at Ed’s pit stop in Birchwood, grateful for the chance to warm up and refuel. A tough three-hour ride from the previous checkpoint meant his body had begun to reject the convenient packets of high sugar treats carried by endurance athletes everywhere. Such packets will sustain you for a time, but sooner or later you have to change your feeds. The time for real food had arrived.

This was mile 65 in an advertised 75-mile day (actual distance: 80 miles). The end was within reach, and after a twenty minute rest, Dallas stepped outside to remount his Framed Minnesota 2.0. Pushing through the door into the -20 degree wind chill, he realized he’d made a mistake. His high effort on the last segment had caused sweat to soak his jacket. As he pushed his fat bike through the parking lot, he could already feel the garment start to stiffen into a block of ice. Suddenly the final stretch had become a far more daunting challenge. 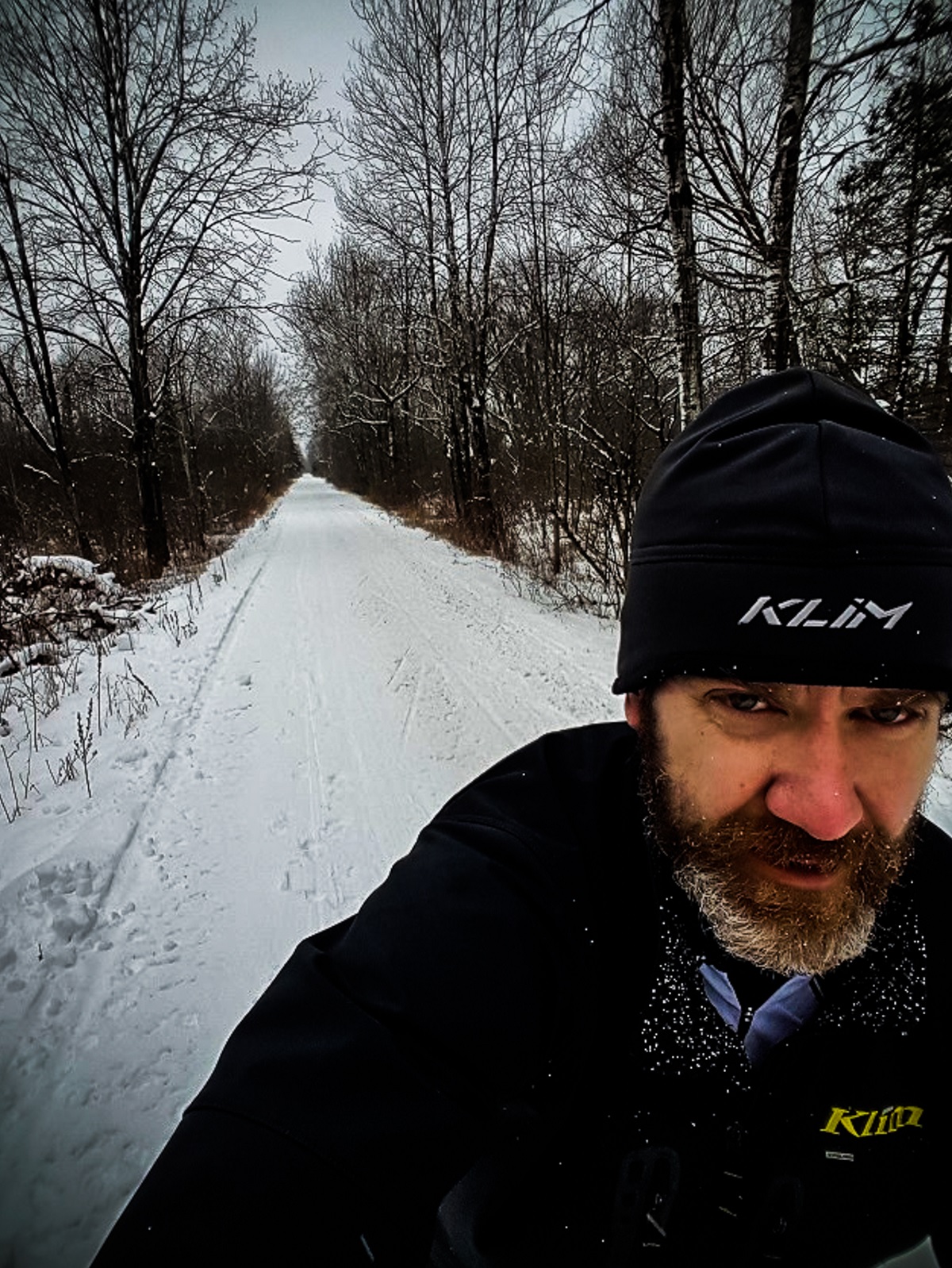 The Tuscobia 150 is a qualifying event for the Iditarod Trail Invitational. It’s billed as a “human powered run, bike, or ski event held on the Tuscobia trail in Northern Wisconsin.” This is a different sort of activity than hoisting your bike off a roof rack and doing a lap or two of the local trail. Exposing yourself to the elements for a dozen hours in the midst of a Wisconsin winter is no laughing matter. If you’re the type of person who complains about the air conditioning at the mall theater… this isn’t the race for you. It’s pretty much a guarantee that at some point in some event during a race season your fingers and toes will go completely numb. These races don’t really start becoming interesting until you find yourself wondering if you’ll ever type or tap dance again.

That being said, neither racers or race organizers are reckless. All participants in the Tuscobia 150 are required to carry, among other things, an emergency sleeping bag, a bivy sack, and 3,000 calories of food, which they must have at all times–even at the finish line. The official race page suggests bringing along a jar of peanut butter or a pound of butter. There is also cell phone service on most of the course. In short, the Tuscobia 150 is a gateway event to even more intense activities. You’re not quite at the top of the mountain, but it’s a vantage point from where the peak is visible. 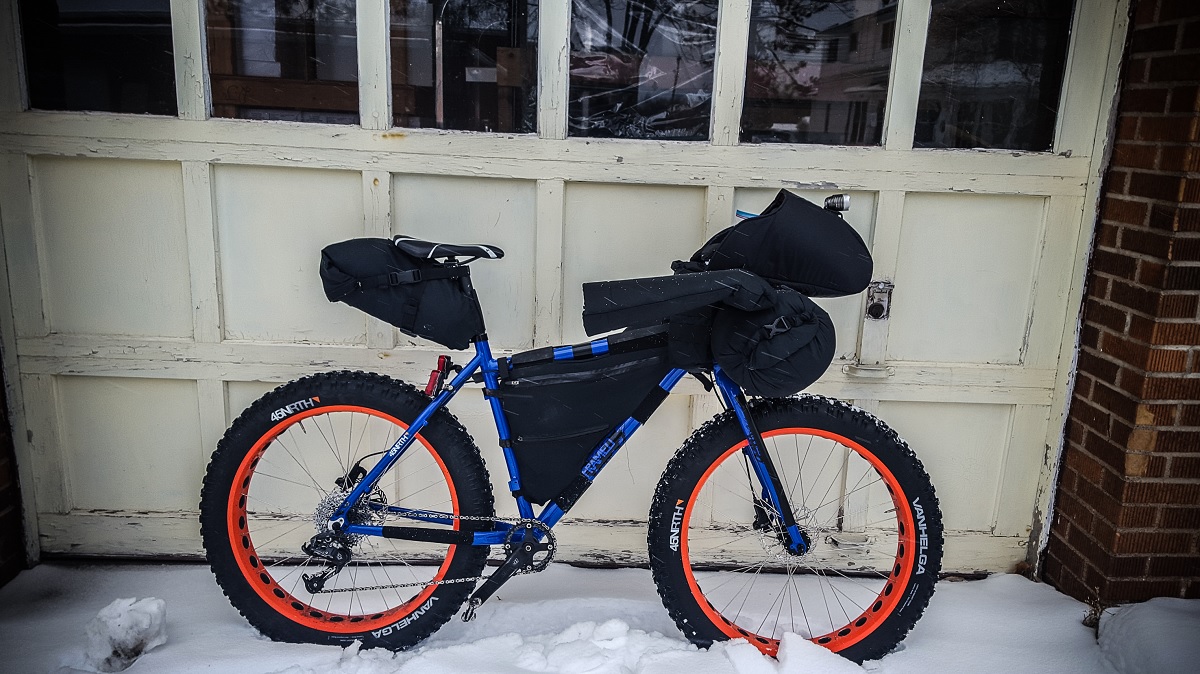 Racers met on Friday, January 8th in Rice Lake, WI to go over gear and do a safety meeting. The next morning, participants of the 150-mile event took off at 6am from Rice Lake. The 75-mile riders jumped on a bus to the turn around point at Park Falls. The bus rides for events like these are unique–they are both solemn and pregnant with nervous energy. 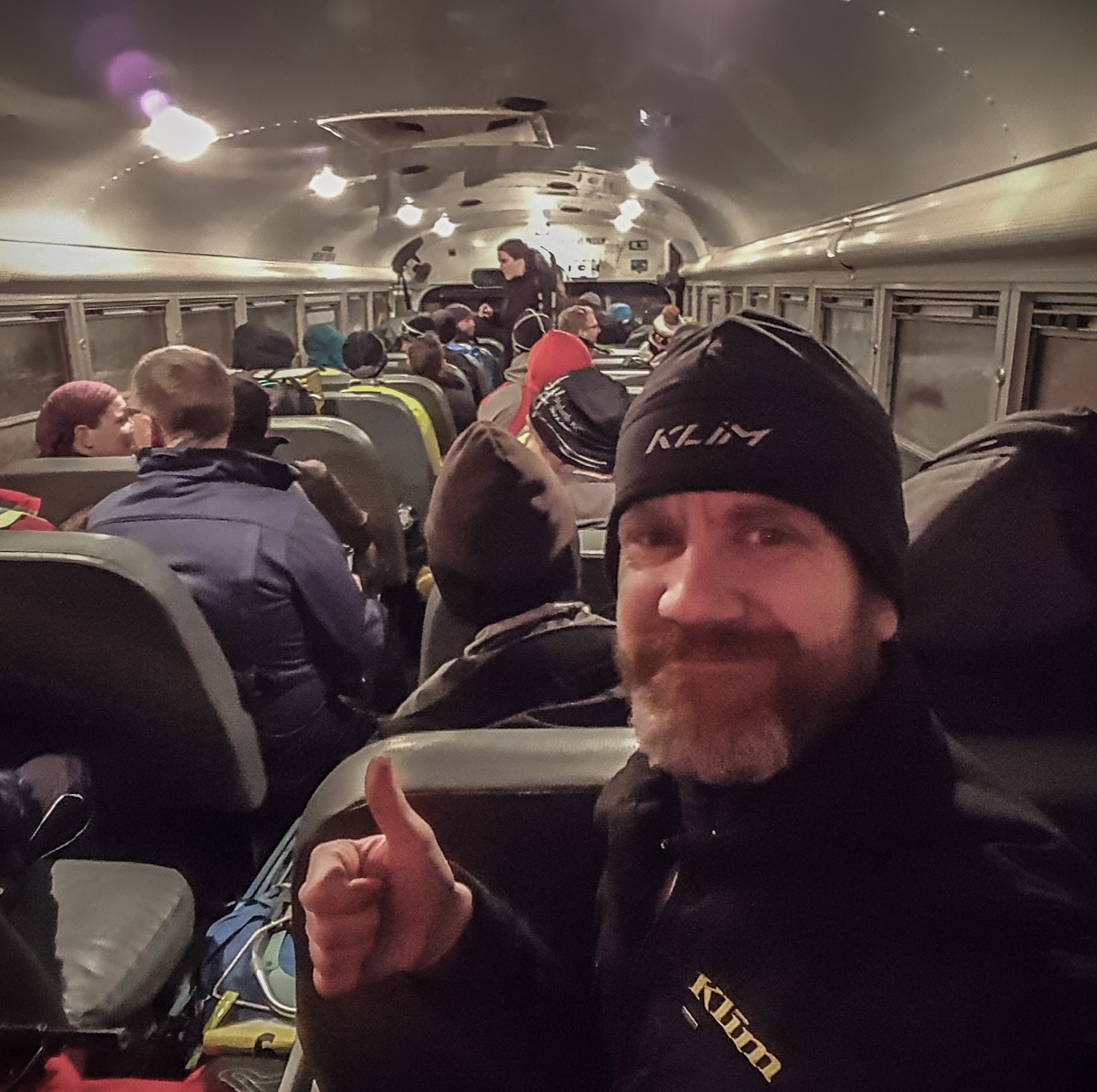 The 2016 event was Dallas’s first effort at a race like this. The previous year, one of our other friends had made a go. He called it a “learning experience,” and was content to retire after 40 miles. Reports from both Tuscobia and the Arrowhead 135 keep showing up on the radar, and the uniqueness of the challenge proved to be too appealing to ignore. Coming off a summer of 2,800 miles, which included the Cup O’ Dirt challenge and the Gravel Conspiracy, Dallas felt prepared.

Temperatures ranged from -5 to 18, which isn’t bad, as previous editions have hovered in the -20s. At 10 AM, 50 cyclists, 20 runners with sleds, and two skiers took off on their journey. The pack turned the starting stretch to powder, but the trail hardened up again once the group spread out. 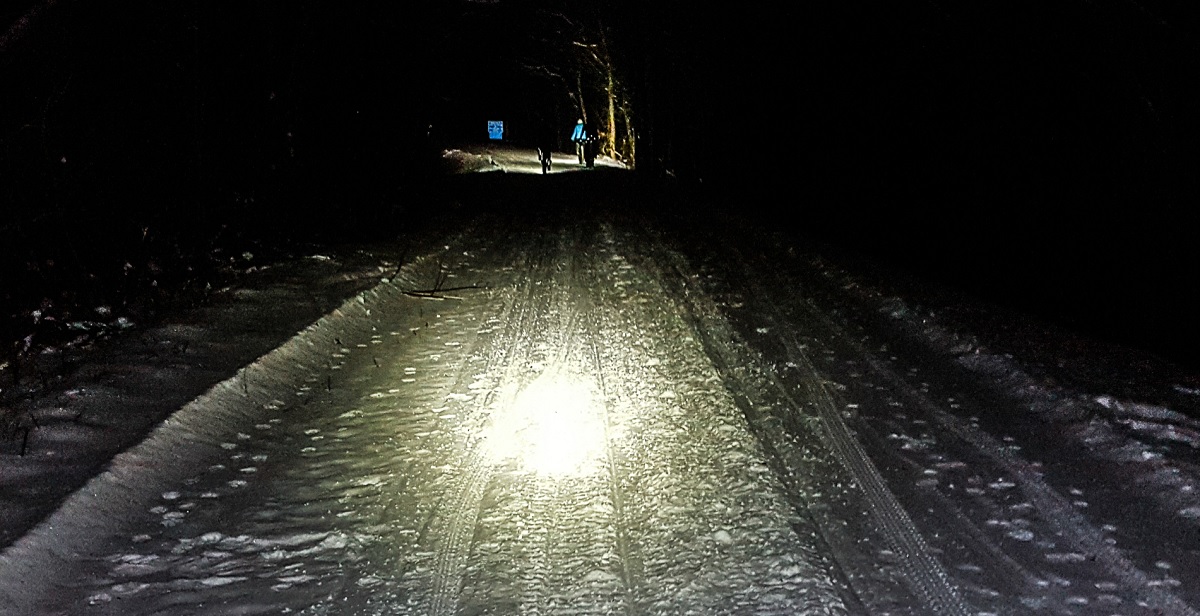 The Tuscobia trail is a converted railroad bed which is open to ATVs, horses, and cyclists in the summer. It’s predominantly flat, but there are the occasional short, steep climbs in the dips where the trestle bridges were taken out. Snow had been minimal, and the cold weather and snowmobile traffic packed the course very well. In fact, the trail was still open to snowmobile riders, all of who were very courteous and slowed down to pass.

Training indicated to Dallas that he would be able to maintain a 7-9mph pace. The terrain tended to change as wind blew drifts across the track, so cadence rather than speed became a more optimal indication of effort level. After three miles, the focus was on executing the food and drink plan. 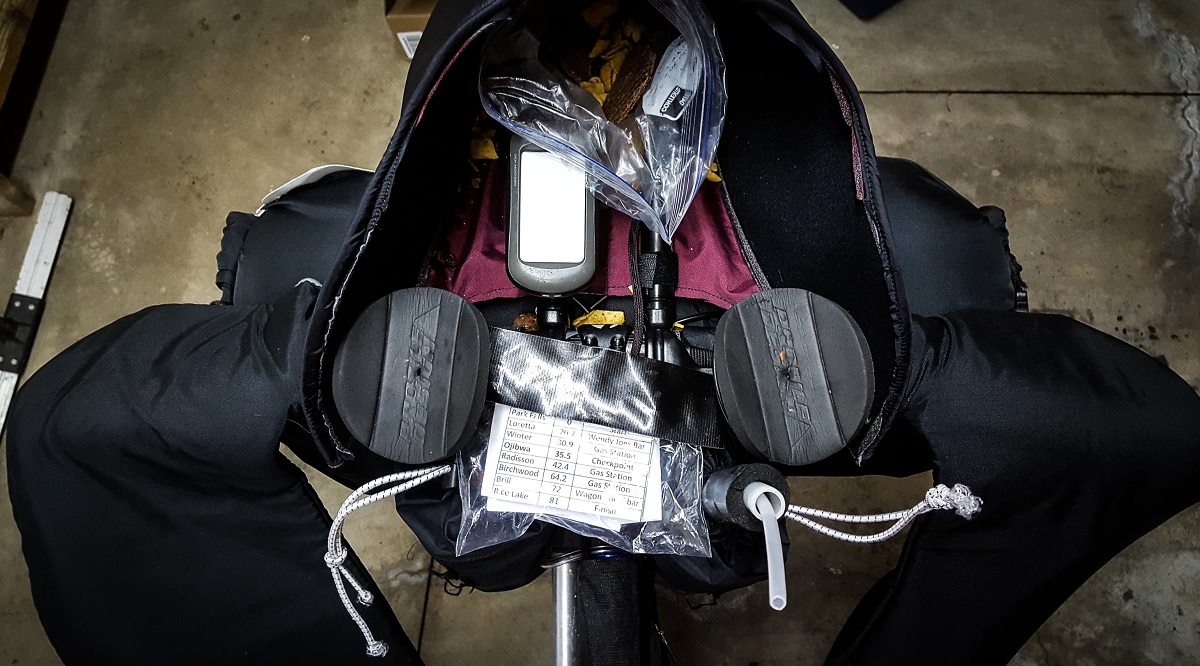 At the 35-mile checkpoint in Ojibwa, things were going well. A positive outlook is probably the most important factor in an event like this, and the thought of not finishing was not allowed to creep in. Clicking off the miles, Dallas arrived at Ed’s pit stop, where he froze his jacket.

The frozen jacket could have been a real problem in the event of a mechanical issue. Despite the miles, Dallas’s preparation served him, and his legs felt good. He gave a good hard effort for a while to stoke the furnace, and though he was still wet, he kept warm enough to push through to a finish time of 11:04–good for 17th overall.

Races like this are the best way to take a mental brake from your regular life. You circle the date on the calendar then watch it approach with a mix of excitement, apprehension and fear. On the other side of that finish line, you’re guaranteed to know something about yourself that had eluded you until the moment of completion.

Dallas is already making plans for 2017, and the new enticing number is 160.