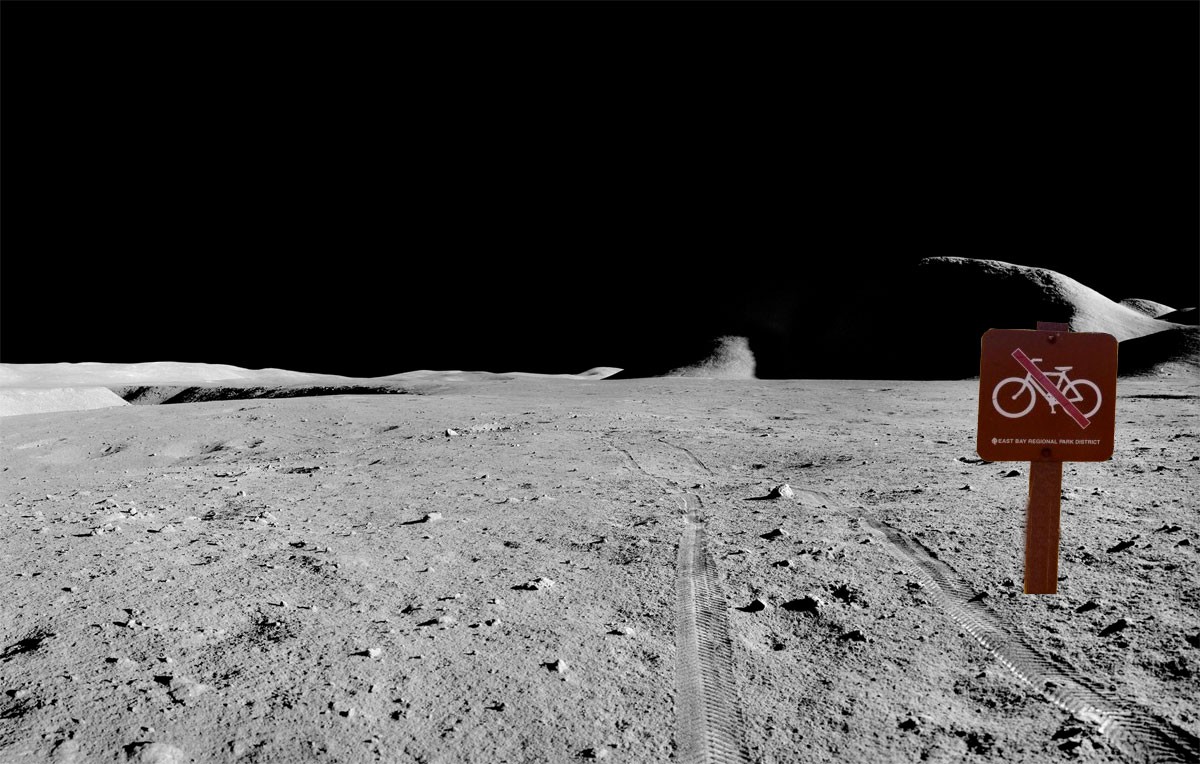 A new mountain bike advocacy group has been gaining momentum after recognizing a gaping, black hole in current mountain bike access laws. It turns out the 1973 Agreement Governing the Activities of States on the Moon and Other Celestial Bodies (aka the Moon Treaty) contains language that the newly-formed Inter-planetary Mountain Bike Association (IPMBA) says is both discriminatory and short sighted, so they’re working to have it overturned.

Opponents to bikes in the final frontier say the current Moon Treaty bans mountain bikes on the moon and other planets due to a clause prohibiting altering a planet’s environment. Mountain bikes, they argue, would kick up enormous amounts of “lunar pow,” damaging and potentially altering the moon’s precious environment.

“According to our studies, mountain bikes kick up far less lunar dust than a standard moon rover,” says IPMBA board president Ryder Gungho. “If you ask me, this whole treaty just stinks of someone trying to protect their own personal stash.”

“The 1973 Moon Treaty was supposedly written to ensure everyone on Earth had equal access to the moon and celestial bodies,” he says. “Unfortunately that’s not how it’s worked out in practice. Mountain bikers have been shut out of interplanetary riding for decades, and we think it’s time that changed.”

Complicating matters is the fact that the Moon Treaty prohibits ownership of celestial properties, so investors are wary of building the massive bike parks that are so popular here on earth. Without any “must ride” bike parks or low gravity shuttle equipment in place, mountain bikers are hesitant to make the trek to the moon and beyond.

“Like, if there were a bike park on Mars, I would totally go there,” says IPMBA supporter Miles Rhode. “As it is now, that entire planet just sits empty and underutilized.”

Indeed, according to projections, mountain bikers will run out of places to build trails on Earth in the year 3150, so the time to act is now. Supporters of the IPMBA say opening trail building on other planets will allow our sport to continue to grow at its current rate for many generations to come.

“For us, this is really about the next generation. Where will they ride?” asks Gungho.

The mountain bike industry, for its part, is entirely on board with the IPMBA’s mission of gaining MTB access to our galaxy’s celestial bodies. One industry executive, who asked to remain anonymous, told us he’s very excited about the possibility of marketing new types of bikes for each planet’s unique gravity and terrain.

“It’s like when fat bikes came out… Only now we get to tell people they need a Moon bike, a Mars bike, and a bike for every other planet they probably won’t visit anyway. It’s a potential bonanza!”

Community
You Don't Have to Love Suffering to Mountain Bike, But...
Community
A Growing Movement Aims to Simplify Trail Etiquette Through Old-Fashioned...
Sponsored
Mountain Vibes Only with the Club Ride Sun Valley Collection
Progression
Have you Ever Attended an In-Person MTB Skills Clinic?
Subscribe
Login
Please login to comment
2 Comments
Most Voted
Newest Oldest
Inline Feedbacks
View all comments

Where can I donate?

BEAUTIFULLY politically incorrect Jeff. The double speak of groups like IMBA and PC speech control in general have got to go (or at least “called on the carpet”). PC itself is pathetic and actually highly dangerous to our nation … … but I digressed and this is a mountain bike forum. =) But then again, we have all experienced how far double speak, politics and PC have penetrated our lives, even down to a simple trail in a vast landscape. Good morning to everyone from Outer Mongolia. It is a chilly beautiful early spring morn here and that “speaks” of a mountain bike ride. Sleep well.