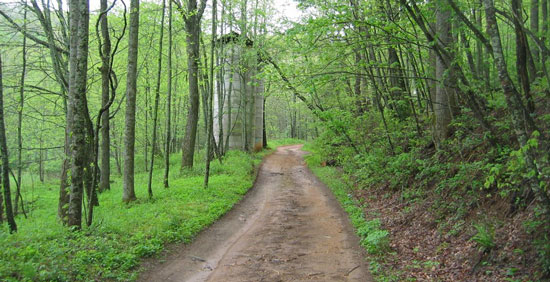 I’m less than 2 weeks away from my first metric dirty century in Sumter National Forest and this weekend I had my toughest training ride yet. For those who don’t know a metric century is 100 kilometers or 62.2 miles and my plan has been to gradually increase my long weekend rides until I get close to 60 miles or about 5 hours on the bike. One week ago I rode 60 miles but that was on a road bike riding a flat course (and it took just over 3 hours).

Saturday I got an early start outside Dahlonega, GA where I tackled the Canada Creek loop, Winding Stairs, and Camp Wahsega Rd. After 5+ hours I covered 48 miles and nearly 5,000 feet of climbing which is about 4,200 feet more than I’ll probably climb in the Sumter Metric Century. The hardest part of the ride was probably the middle – miles 20 to 30 – mainly because I felt like I had gone so far already but still had so far to go. I was surprised that the mental challenge of riding long distance was nearly as difficult as the physical challenge of pushing the pedals mile after mile. At any rate, I survived and I feel good about the race on May 16.

Throughout my training I’ve been using the Polar CS600X cycling computer and even though I’ve been using it for more than a month I probably still haven’t used half the functions. Polar is known for heart rate monitors and cycling computers but the CS600X ups the ante with an optional GPS pod, cadence and power sensors, and wireless data transfer to your PC. I’ve been stuffing the GPS pod into my back jersey pocket where it seems to get a great signal every time – impressive stuff, especially given that even handlebar mounted units often lose reception in the woods.

The Polar CS600X comes with ProTrainer 5 software which lets you view amazing detail about your workouts in an easy to use calendar interface. You can plot heart rate, speed, elevation, time, etc. and even view the data overlaid on a map of your ride (thanks to the GPS). The CS600X even lets you view basic charts and graphs while you’re on the bike which is great for monitoring heart rate and elevation trends mid-workout.

Look for a detailed review of the Polar CS600X later this month after I put it through its paces during the Sumter Metric Century May 16!

Jeff,
I am signed up and will see you there.