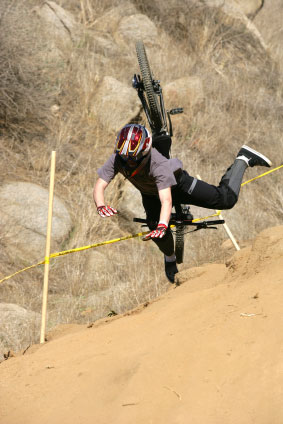 Timothy Jones posted a good article on the Made to Order Bikes blog about mountain bike safety earlier this week that’s worth checking out. Beyond wearing a helmet, Jones reminds us of the importance of eye protection, gloves, and even MTB body armor for downhill / urban rides.

It’s interesting to see how safety gear has evolved in other sports like skiing where just a few years ago no one was wearing helmets on the slopes. Today it seems like about half the kids (and adults) you see skiing and boarding are wearing helmets – it’s as if being safe is cool now. I can see the same thing taking place in the MTB world as folks start opting for shin and arm guards more and more.

Jones talks about his brother breaking bones in multiple bike crashes and it turns out this isn’t so uncommon. In fact, of 1,984 singletracks members surveyed, 175 riders broke bones on the trail at least once; 112 of those broke bones more than once! Of course that won’t keep me off the trail and I’ll still attempt the gnarly moves – I’ll just drink an extra glass of milk before I go out 😉

[…] Just last week we wrote about how mountain bike safety gear is quickly evolving… Get a full face helmet that’s normally $200 for just $99 this month. […]