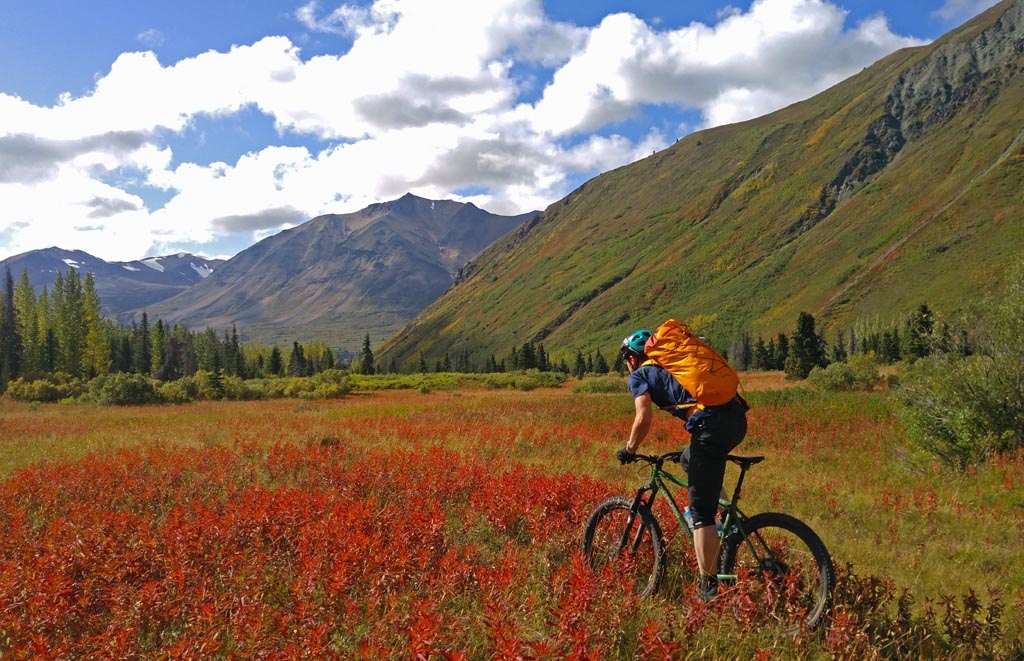 Kluane National Park in the southwest Yukon Territory is vast, covering 22,013km2 (about 8,500mi2), and is home to Mt. Logan, Canada’s highest peak at 6,050m (almost 19,900ft). The park is so big that you can’t see even see Mt. Logan from the closest town, Haines Junction. The National Park doesn’t include the Kluane and St. Elias Icefields, which extend west into Alaska and south to British Columbia, and covers an area larger than the country of Switzerland. The permanent population of Kluane National Park and the icefields is ZERO.

Perhaps the lack of population pressure explains why Kluane National Park is relatively friendly to mountain biking. (Despite paying lip service to mountain biking, Parks Canada is often less-than-progressive when it comes to mountain bike trail access). Another reason Kluane is so bike-friendly may be that the Park Superintendent is the former president of the Whitehorse Contagious Mountain Bike Club. Regardless of the reason, a surprising proportion of Kluane’s trails are open for mountain biking. We sampled three of the trails during our trip: the Cottonwood Loop, the Auriol Trail, and the Alsek Trail.

It shouldn’t be surprising that the premiere Kluane mountain bike ride is big, long, and requires serious committment. The Cottonwood loop circumnavigates the Dalton range, which is itself just a series of pimples on the face of the Kluane Icefields and St. Elias Range.

At 85km (53mi) long, the Cottonwood Loop is more then just a pleasant ramble in the backwoods. The ride quickly gains the alpine and stays there for a long time, offering up a mix of doubletrack where riders can cover ground quickly and some singletrack too. The last 7km (4mi) is a 2 hour a hike-a-bike on trail beside Kathleen Lake.

The Cottonwood Loop boasts amazing views, so this ride is best done on a clear day, or as recommended in the Travel Yukon page as a multi-day hike or ski. I don’t remember how many creeks we crossed; whether it’s one creek crossing or one hundred, riders will end the ride with wet feet.

If the first creek is difficult to cross, turn back! That first creek crossing is relatively easy so it will be a harbinger of what is to come. Don’t be that person who took 23 hours car-to-car because they were washed downstream when attempting to cross a very flooded Victoria Creek toward the end of the ride.

The best time to ride this trail is when the creeks are running low. This will likely mean a late-season start around late August to mid September. I recommend bringing plenty of food, and to keep moving to get off the trail before dark.  Our ride took place in early September which meant lower creek levels, but slightly shorter days with chilly morning starts. The upshot is we were able to experience the beginning of brilliant fall colors.

Riders should check with Parks Canada before planning a trip along the Cottonwood Loop. This is grizzly bear central and it’s good to know where bears have been spotted. Also, Parks Canada does conduct brushing expeditions (as does the CMBC), but it’s also good to know if the trail is overgrown so riders can plan accordingly.

We started our day trip by leaving Whitehorse and driving 2 hours to Kluane, parking at the Mush Lake Road trailhead. We arranged to have our car brought to the Kathleen Lake trailhead at the end of the day by another group who was doing the Cottonwood the next day. Mountain bikers who enjoy extra suffering can choose to ride about 10km on the road to complete the loop to avoid shuttling vehicles. It’s also possible to arrange a boat pick up at Kathleen Lake to avoid the “joy” of a two hour hike-a-bike to complete the ride. (Boreale Explorers may be able to arrange this, but doing so requires a sat phone to communicate with the boat.)

For full route details, reference the Kluane National Parks description which is posted here. (The ride description might disappear from the Parks Canada website, so click here for a PDF archive.) 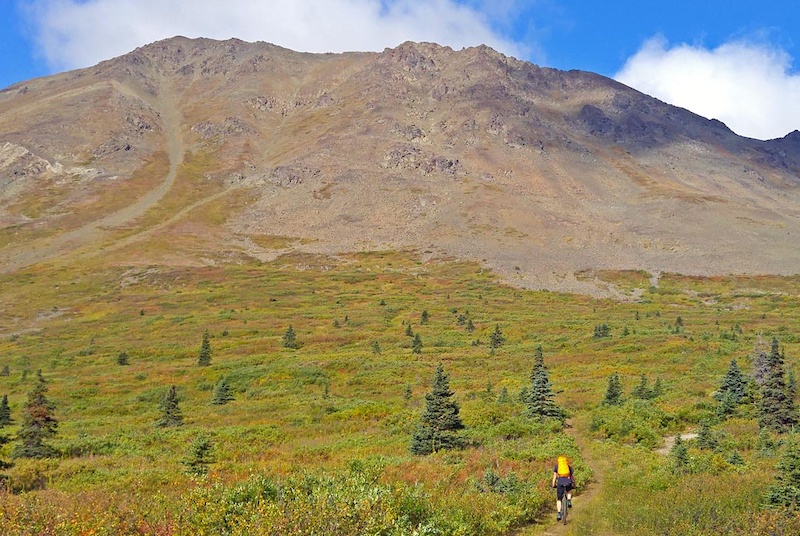 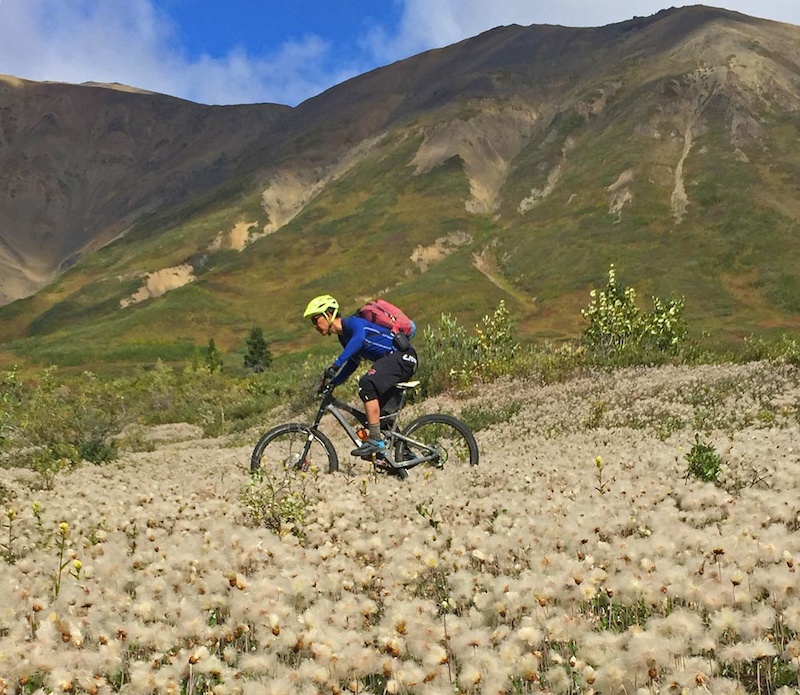 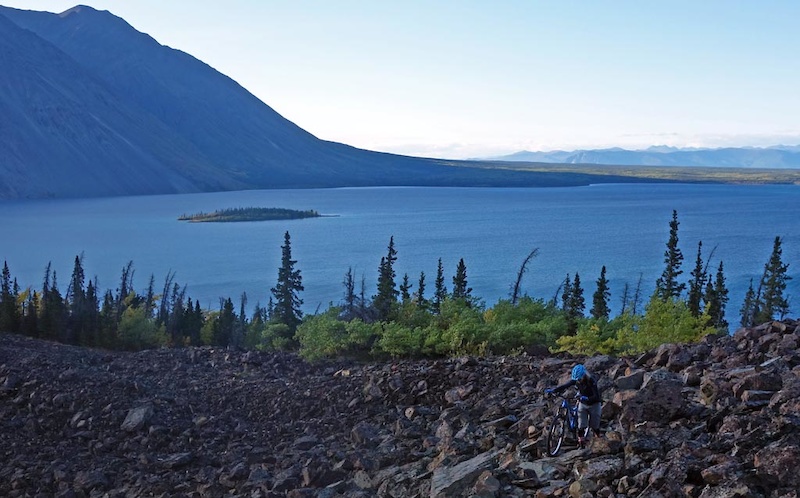 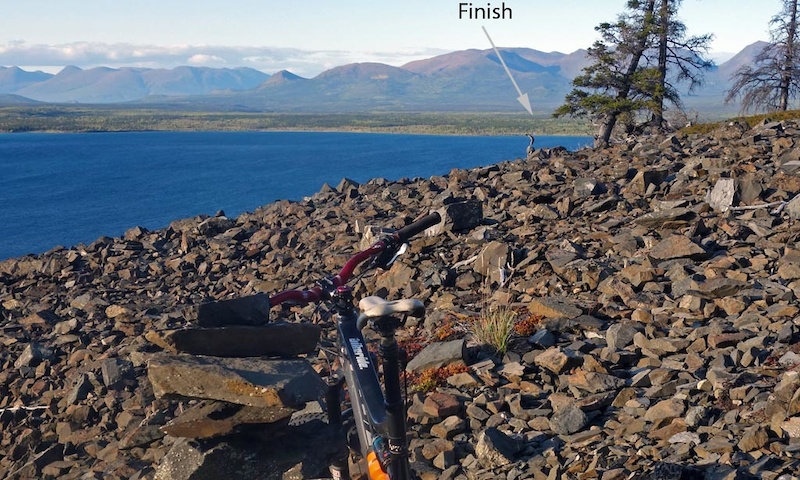 There are shorter rides in Kluane such as the Auriol Trail, a 15km (9mi) loop with an elevation gain of 367m. It’s also possible to extend the Auriol loop by dropping bikes and hiking into the alpine. Park directions are comprehensive, as is signage. Compared to the Cottonwood, the Auriol is a pleasant ramble, though one that is heavily frequented by grizzlies. Make plenty of noise and stay alert! The views into the Ruby Range are excellent, and most of the loop is totally rideable. The singletrack descent in particular is of high quality.

The Alsek Trail offers another chance to explore a small section of Kluane National Park, though it is not a singletrack trail. Expect a flat, 29km trail (one way) route that’s a mix of road, doubletrack, and short sections of singletrack. The first 15km is a doubletrack that is open to vehicles, but it’s very slow due to the washouts crossing the road. It’s probably faster to ride this section on a bike than in a car since the road is so rough. We only rode about 7km to Serpentine Creek before turning around, as the glacial adiabatic headwinds didn’t inspire us to travel further.

Continuing on, the Alsek trail promises to be a very scenic ride as it provides views of the spot where the Alsek, Dezadeash, and Kaskawulsh Rivers converge (see the Kluane National description.)

Flight over the Kluane Icefields

The best way to get a sense of the size of Kluane National Park is to take a Flight Seeing tour of the Kluane Icefield which we did in 2013. This icefield is even larger then the National Park and extends west into Alaska and south into British Columbia,

Our 90 minute flight over the icefields was booked through Kluane Glacier Air tours (their rather simple website is here). At $300 per person it isn’t cheap, but it’s one of those things that we’d have regretted untill the ends of our lives if we had skipped it. The entire writeup with more pictures is here.

Midway through our flight, we passed over Kluane National Park. The park is the location of the Kluane Icefields, a geographical feature straddling the US/Canada border encompassing the Kluane, Chugach, Wrangell, St. Elias, and Glacier Bay parks and ranges. This UNESCO scheduled site is glaciated permanently with snow-covered terrain. It’s also the largest non-polar ice-field in the world.

Riders can day-trip to Kluane from Whitehorse, which is about 2 hours away. On the day we rode the Cottonwood Trail we started after a good rest at the Coast High Country Inn in Whitehorse. The hotel has an adjoining restaurant and is superbly comfortable.

It’s also possible to stay in Haines Junction or at least somewhere close. We booked a room at Aurora House on Pine Lake just 10 minutes from Haines Junction.

The mountain biking in Kluane National Park is remote, rugged, and beautiful. While it takes some time and effort to make a trip like this happen, it’s a trip to be remembered for a lifetime.

This is part 2 in a series on mountain biking in the Yukon. Catch up by starting with Part 1 here.