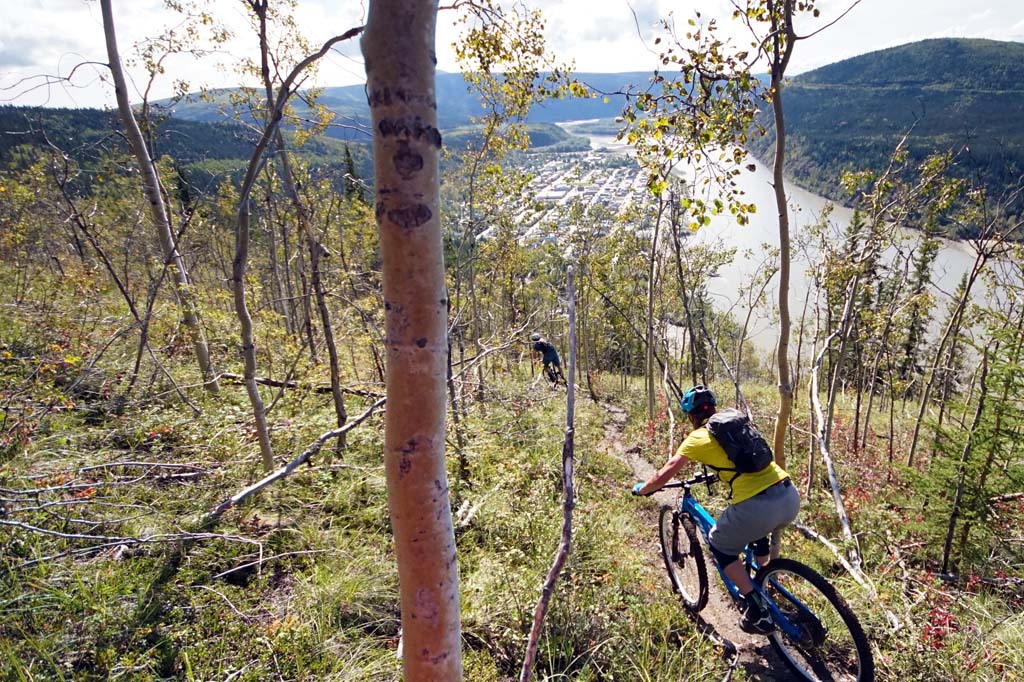 The Yukon is big country, with big weather and the midnight sun, which makes venturing this far north daunting to many explorers. Travel Yukon has a slogan, “larger than life,” that pretty much sums it up: vast vistas remind viewers of their insignificance, while the trails inspire life.

More than 100 years ago people began traveling to the Yukon Territory in search of filthy lucre in the form of yellow gold. Now a new gold has been discovered, one that doesn’t “turn the minds of men,” but instead constantly refreshes the spirit. It’s the golden, natural dirt coveted by mountain bikers the world over. It’s the allure of sweet singletrack that draws riders in and keeps them coming back. A seemingly limitless, empty wilderness surrounds Dawson City in the Northern Yukon, filled with natural beauty, baiting intrepid mountain bikers in search of adventure.

The area around Dawson, Yukon Territory, is traditional Tr’ondëk Hwëch’in First Nation (“THFN“) land. The THFN manages the land in true partnership with the Yukon territorial government and the City of Dawson. The THFN seem to have been blessed not just with beautiful land, but also motivated leaders and young people. We had the privilege of riding with two of these young people–Marshall Jonas and Gaven Johnson–who are the primary trail builders in Dawson.

We timed our trip for August to take advantage of the warm (but not hot) days and the cool nights that encourage the bugs to die out. The tundra and northern boreal forest explode this time of year with color, shining iridescent yellow, orange and red. Northern Canada also gets a bit of moisture in late summer, so the trails would be nice and tacky.

We flew on Air North from Vancouver to Dawson with our bikes. Air North has virtually no check-in lineups, treats you well with warm cookies on flight, and doesn’t overcharge for bikes. The airline is really the way to go for trips up North. Our goal was to sample the bike trails of Dawson City, most of which are centered around the main relief of Dawson’s Midnight Dome, a 550m prominence that looms over Dawson, topping out at 880m high.

The Dawson City trail network is very much in its infancy, with a surprising number of the purpose-built bike trails having been built in 2013 and 2014 by Marshall and Gaven. (Marshall started building mountain bike trails when he was 22 years old). The trails in Dawson are natural, raw, and steep. The trail builders like their downhill bikes and aren’t afraid to use them to their full potential. You should look elsewhere if you don’t have decent technical skills, or desire a flow-trail experience. That being said, there are non-technical rides in the area, including the Ridge Road Heritage Trail.

There are four trails leading down the Dome, some of which are the Gaven/Marshall downhill trails, and some of which, like the Nature Trail, are singletrack connected by doubletrack. There are even more disconnected trails that form part of the XC ski network in winter. It’s easy to shuttle these trails using the accessible paved road. Not that riders need a shuttle to ride these trails; self-powered access is no big deal, with the ride-up taking about an hour.

Downhill bikes aren’t required for the Dome downhill trails, although we had to dial aggression back substantially compared to our guides’ dedicated rigs in order to preserve bike, life, and limb. These trails are fairly steep, but because of the lack of traffic–at last check there were only 10 active riders living in town–the trails don’t show much wear. The upshot is riders can hit jumps and land in mossy loam. We were fortunate enough to sample some of the Dome downhill trails with the aid of builders Marshall and Gaven.

There are other trails descending off the Dome that aren’t just straight down. The Ridge Trail is primarily a hiking trail which drops off the Dome and intersects many historical sites, including the old Moosehide village trail. (Be sure to obtain THFN permission before riding the Moosehide village trail). The Ridge Trail is insanely scenic, with old-school technical jank, and has some steep portions. It also has a short hike-a-bike section traversing a natural rock slide off the Dome.

Dish Pig to Magic Carpet requires riders to first brake-burn down some of the steeper Dawson trails, then intersect the trails close to the satellite dish radio towers. Take all of these trails on a scenic day and make sure to budget plenty of time to ogle the views. 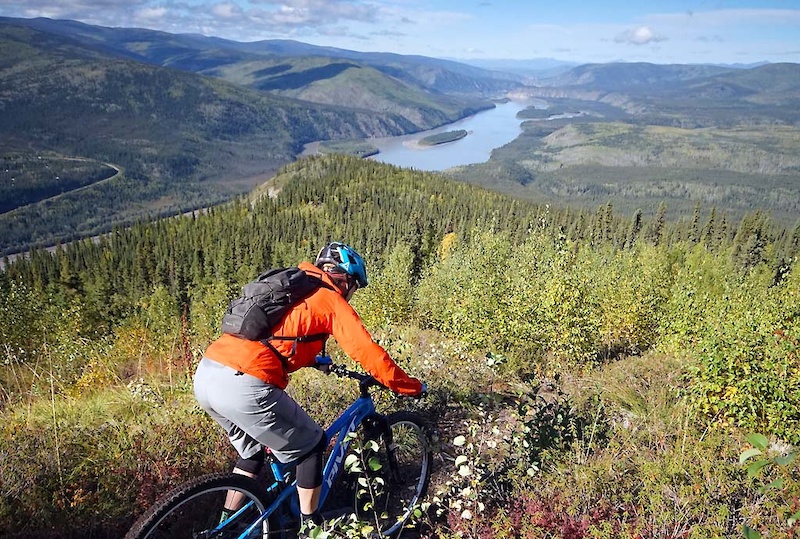 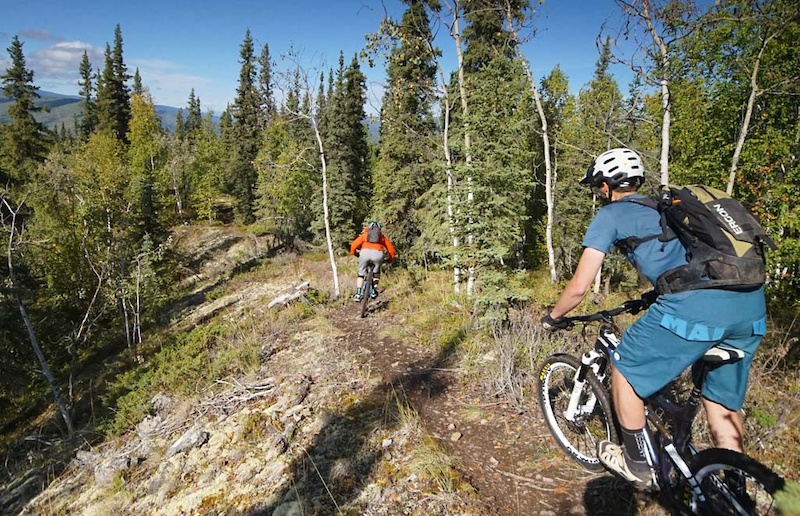 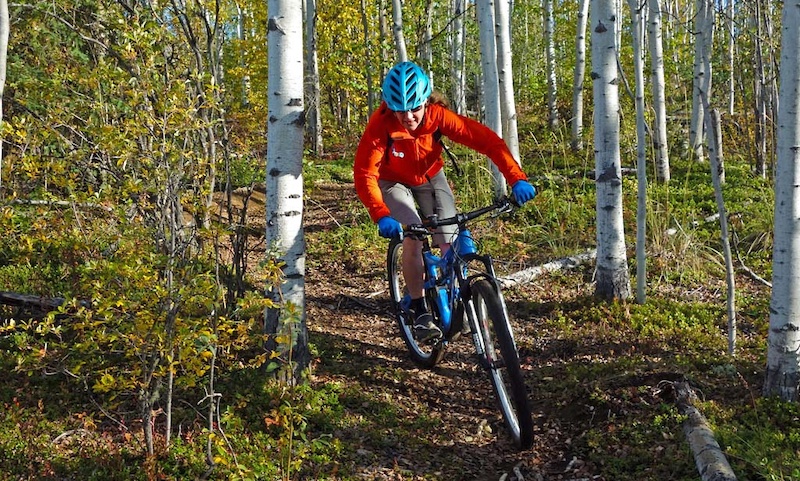 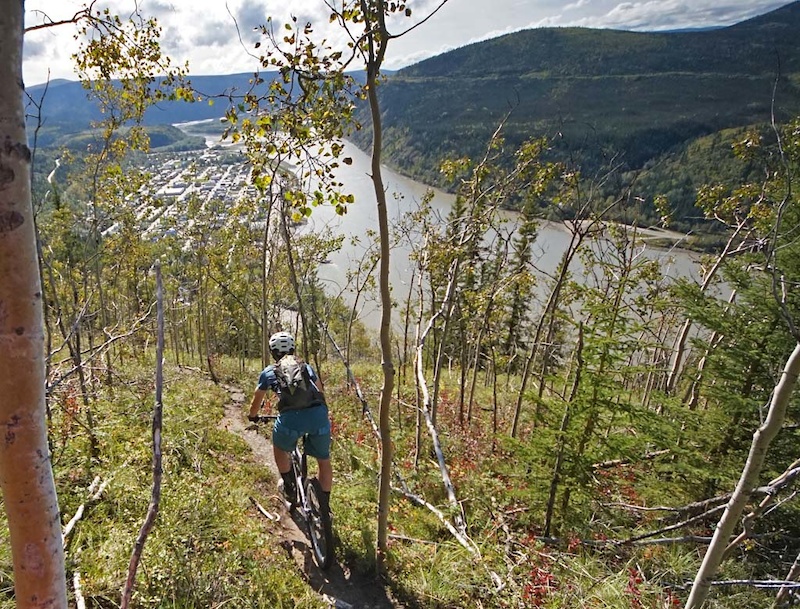 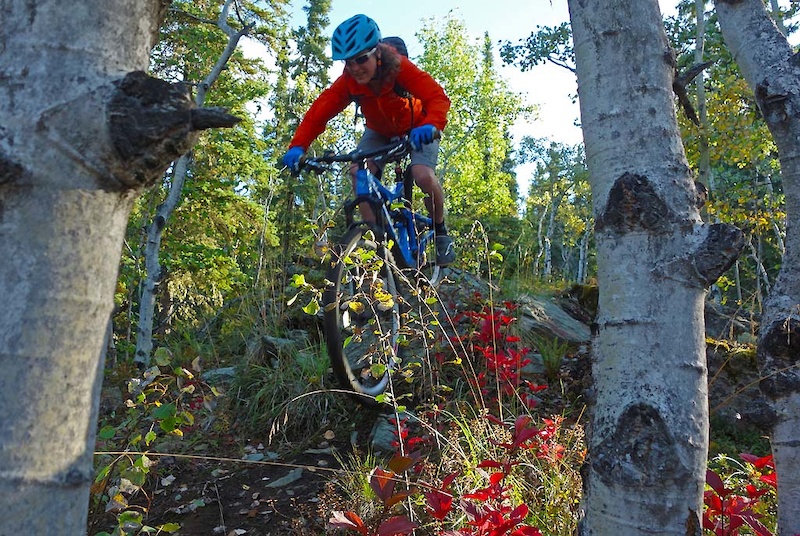 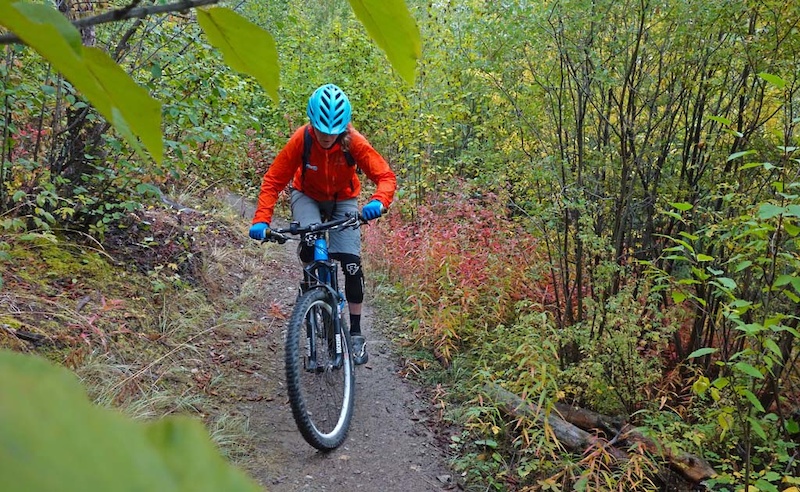 The 9th Avenue trail is a useful connector, having been built on Dawson’s now-non-existent 9th Avenue. The street disappeared when the Klondike gold rush abruptly terminated, sending Dawson’s population from 30,000 to 5,000 in the space of two years. This historic trail runs above the houses in town, since before the gold rush, the houses in Dawson were built on what was then a swamp. As the population swelled for the gold rush, houses were constructed up in the hills surrounding the original town. But as folks left, 9th Avenue became deserted, and eventually a trail was built on the old 9th Avenue road as a historical reminder. 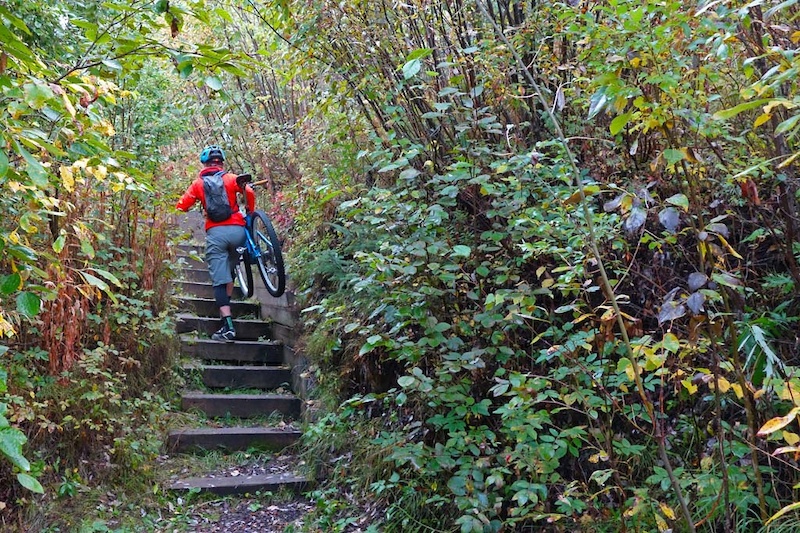 The 9th Avenue trail is maintained primarily by KATTS, the Klondike Active Trail and Transport Society. It’s a worthwhile walking and hiking trail, but there are many sets of stairs so it’s not a great ride by itself. However, riders can use portions of the trail to access climbs to the Dome. The trail is a decent choice for spinning out the legs on day 1 in Dawson, or to check out some mining history.

The future bike trails of Dawson

Some might raise an eyebrow at the idea of expanding tourism in this remote part of Canada, but as it turns out, Dawson City, the THFN, and local bikers are all committed and supportive of the idea. It helps that the authors of the plan are the same folks behind the miracle of biking at Carcross, where a small town of 500 people have created a magical network of multi-use trails built and maintained by locals.

In Dawson City, plans are in the works to build out some more approachable blue and green trails via the Yukon government’s expansion of the Singletrack to Success program. There is also a plan to build out climbing singletrack up the Dome. Having said that, plans are simply wishes and hopes, and require funding to implement. Fortunately Dawson City has a strong base on which to build.

Ridge trail of Dawson City in the Yukon. August 2017 from Lee Lau on Vimeo.

The top of the Dome offers sweeping views of the Klondike River, the vastness of the Yukon spreading as far as the eye can see. The Klondike River brought gold prospectors here to the north many years ago. Today, it’s the trails that will bring people here to sample the golden Dirt of the Dome.

Thanks to Marshall Jonas, Gaven Johnson, and Ben MacInnis for showing us around. Yet another tip of the hat to Jane and Derek for the Singletrack to Success program which is coordinating paid trail builders from THFN to better the trail network. This is part one of a four part series on mountain biking in the Yukon Territory.

Hope to visit one day