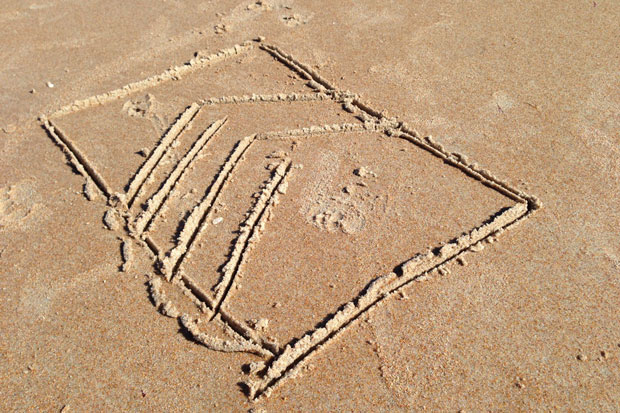 I live in Georgia, which isn’t exactly fat bike country, but even Georgians get tired of winter–it’s just that “cold” to us is any temperature below 50 degrees. In fact, we were digging out of our second winter snow when I decided to head down to Florida to check out the IMBA Epic Alafia State Park trails. 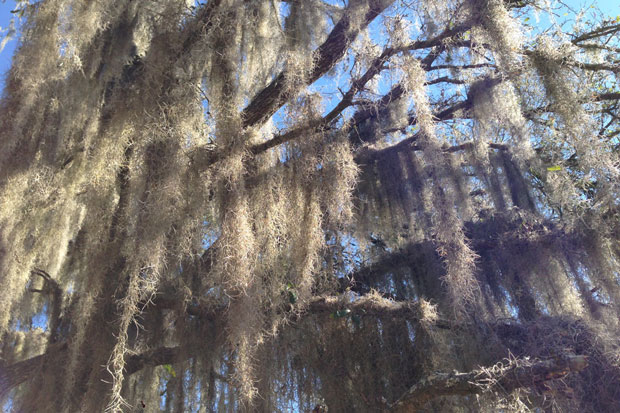 I met up with my local guide Eric, who Greg met at the Better Ride Clinic in Ellijay in 2012. Eric brought along some friends, Paul, Corinna, and Jonathan for the ride as well. Eric and Paul were riding blingy trail bikes–an Ibis and Devinci, respectively–which made me feel a bit self-conscious about the Tallboy 29er I was riding. I figured a cross-country bike was all I would need in Florida and that a FS cross-country bike like mine might even be pushing it. I would soon understand why these guys were riding bouncy trail bikes!

Alafia River State Park (pronounced Al-Ah-Fye-Ah) features about 15 miles of singletrack rated from easy to very difficult. The park is located on the site of a former phosphate mine, where the steep tailing piles form a unique topography that’s well-suited to roller coaster-style mountain bike trails.

The trails are maintained by the SWAMP mountain bike club, and the club continues to improve and add more trails to this well-established system. In fact, we toured one of the newest tracks–a section of Roller Coaster called Derailed–that’s literally being dug into 20-foot-tall sand piles. Club volunteers have put 150 man hours into building about 900 feet of Derailed so far, which works out to about 6 feet of trail built per hour. Or put another way, 150 hours of work for what fast riders will roll through in 40 seconds. Talk about dedication! 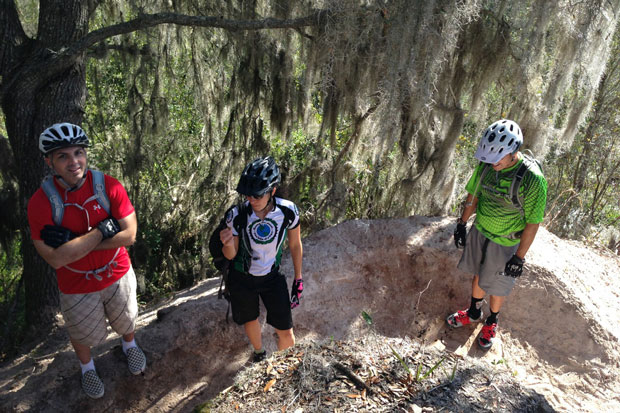 Eric chose our route to hit all the best trails Alafia has to offer, skipping some of the more beginner-friendly tracks and sticking to the intermediate, difficult, and most difficult trails. As we started out on the North Creek trail I was immediately struck by the beautiful canopy above us, dripping with Spanish Moss hanging from mighty oak trees. The loamy singletrack was lined with soft ferns and spikey palms, drenched in shades of green I hadn’t seen since the summer. Even the ponds were green with life (though you wouldn’t want to take a dip.) 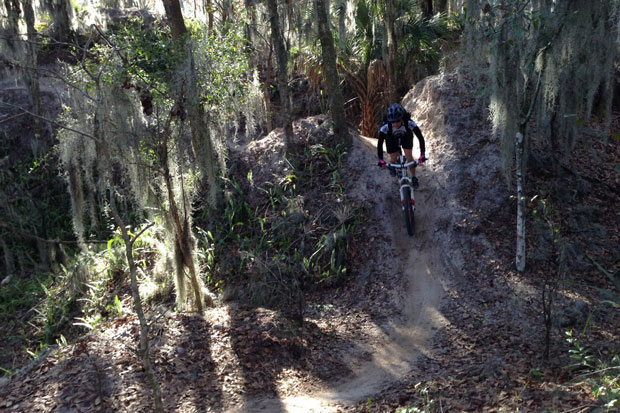 We rode Magic Island, Frank’s Loop, Bridges, and Gatorback before heading to the northwest corner of the park to tackle Rollercoaster and Moonscape. It seemed each trail was building on the one before it with slightly steeper descents and sharper corners. The flow was incredible, and I found myself wanting to session many sections to take full advantage of the drops. All of the difficult and very difficult trails at Alafia are directional, so if you want to hit something more than once, you gotta go back around again! 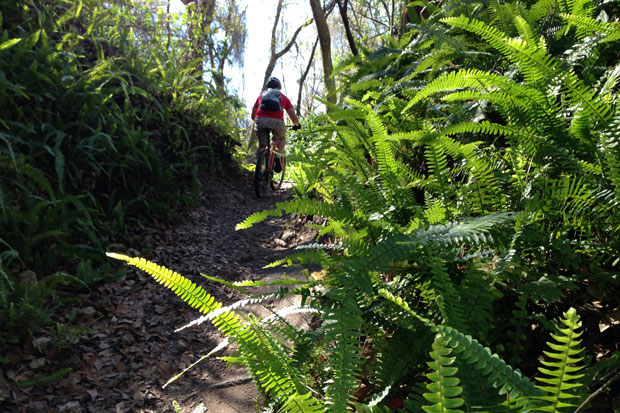 The Moonscape trail was perhaps the most challenging at Alafia with punchy, steep climbs and some hair raising descents. At one point, the trail pointed down and then back up a short climb with a sharp angle descent back down an even steeper slope. I totally missed the sharp left turn and ended up pointed into the bushes. With no easy way to recover, I walked my bike back down a bit and took a (still steep) cheater line to the left of the main drop. Now I understood why trail bikes with 26″ and 27.5″ wheels were so well suited to these trails!

Back at the trailhead, we had clocked almost 10 miles, and I felt like I had had a good workout. These trails are begging for a playful bike on them, so if you’re looking to get serious and put down the miles like I was, you’re in for a surprise.

Eric suggested I check out the trails at nearby Balm Boyette, and even though it wasn’t initially on my radar, I decided to give it a go. I wolfed down a footlong sub in the car on the way over, and Eric led the way to the best stuff Balm Boyette has to offer. 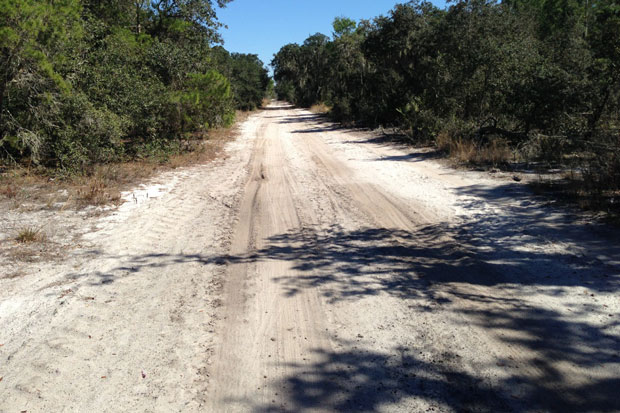 Balm Boyette is said to feature about 25 miles of singletrack and the trails, like the ones at Alafia, are expertly maintained by SWAMP. There’s a 2-mile doubletrack lead into the main trail system that’s fairly exposed, so I would probably avoid this one during summer months. But on this day, the weather was pleasant (it would get just above 80 degrees by the end of the ride) and the sweet smell of ripe strawberries being picked in an adjacent field filled my nostrils as we cranked through tracks of sugar sand.

Eric gave me his map of the trail, because this place can definitely get confusing! This particular map was printed on a handkerchief to avoid problems that can arise from carrying paper maps in sweaty conditions–what a great idea! 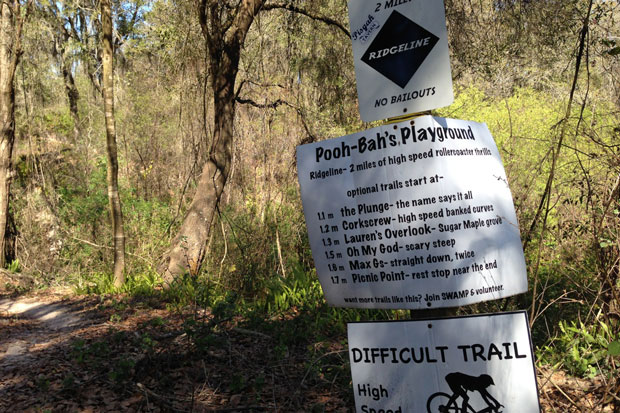 Wide, grassy roads form a rough grid through the preserve and signed singletrack trails peel off the sides. Eric had to get going soon, so we made a b-line for the Ridgeline trail, a black diamond-rated, 2-mile trail with half a dozen named roller coaster descents. Like the trails at Alafia, many of these trails are directional and flow exceptionally well. 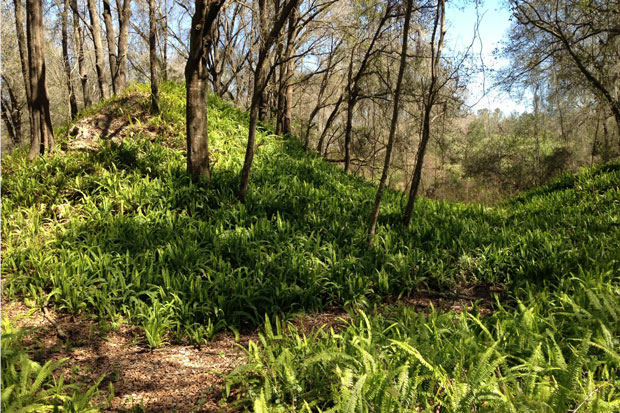 After saying goodbye to Eric, I rode Garry’s Loop and headed straight for Ridgeline. The signs leading into Ridgeline and on the trail itself practically begged riders not to skid on the steep descents–and with good reason. The sandy soil shifts easily, and no one wants to ride a “rollercoaster” full of ruts. The descents on Ridgeline seemed taller and steeper than those I’d ridden at Alafia, and many were stacked back-to-back for maximum effect. What a blast!

After Ridgeline, I hit Pandemonium and North and South Abyss. These trails were every bit as steep, but seemed like perhaps they were not as popular as Ridgeline, despite having a slightly older, more worn-in feel. 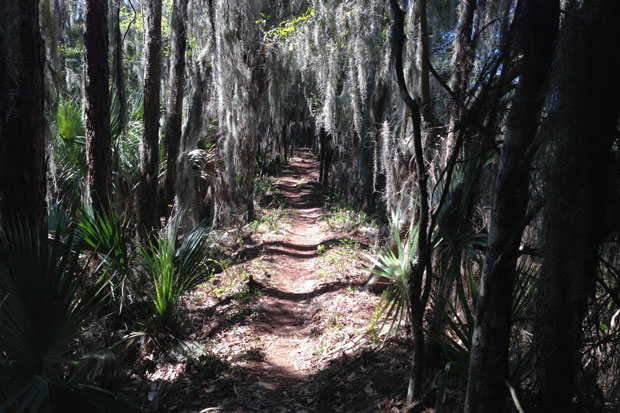 On the way out I rode upper Spider Berm, which tunnels through moss-draped trees, and Randy’s Trail, before jumping back onto the grassy doubletrack back to the car. All told I clocked 15 miles at Balm Boyette, despite missing many of the longer quad trails.

Mountain biking in Florida? For sure.

The mountain bike trails in Florida are unlike trails you’ll ride anywhere else, and not in a “sandy, flat, boring” sort of way either. Mountain bikers, no matter where they’re located, have a knack for building trails that are fun to ride, and clubs like SWAMP make this happen. Fat biking may be fun but so is riding in shorts in February!

Videos
Tips for Tackling the Techiest Climbs on your Mountain Bike...
Gear
How Do You Pack for an Epic 340-mile Bikepacking Route?
Community
One of a kind MTB race series in Florida
Trails
Florida MTB Trail Challenges

I lived in Sarasota for 8 months a couple of years back and made the 40 min trip to both of these systems a few times a week. I couldn’t believe how great the trails down there were. Fast, flowy, and just plain fun! I love the riding in New England, but I think about those trails all the time! I prefer Boyette to Alafia, but you really can’t go wrong either way! SWAMP rules!

I’ve always wanted to visit Florida. Now I really have a good reason ! Sounds like they have some great, unique trails to ride.

Those sandy Florida Trails look prime for a fatbike!

Like the pictures and writing. I rode Alafia and will say the same – hard to expect such fun trails in “flat” Florida.