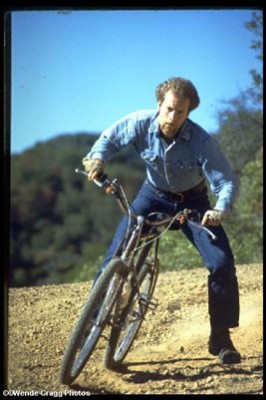 The question of which came first – the mountain bike or the trail – isn’t really a philosophical head-scratcher like the chicken and egg problem. As most of us know, the early mountain biking pioneers modified and built bikes for riding the gravel roads and trails down Mount Tam in California and in other places like Crested Butte, Colorado. In effect, the trail came first – then the bike. But today, that dynamic is shifting, potentially redefining the sport of mountain biking as we know it.

I started mountain biking in the early 1990s – almost 20 years ago – and in those days, the trails we rode were originally designed for hiking or equestrian use. Manufacturers were doing their best to adapt bikes to the trails people were trying to ride – adding front and rear suspension for example. If a trail was too difficult to ride cleanly, mountain bikers would a) blame themselves and/or b) blame the bike (and modify it). No one ever blamed the trail – it was just there after all, a challenge to be conquered (see Greg’s article on sterilized singletrack).

Even today, I see this in the way I’ve evolved my own bike to suit the trails I ride. At least once a week I go for an in-town ride that involves patching together every ribbon of singletrack within a 10-mile radius of my house. Most of the trails I ride aren’t maintained for mountain biking so they’re often overgrown, steep, and in places, technical. As a result, I’ve shortened the bars on my hardtail, switched over to fast rolling tires (to make the road riding between trails go by faster), and have stuck with a rugged 1×9 drivetrain after wrapping barbed wire and various other metal bits in my cassette on several occasions. All of these subtle adaptations I had made became clear when I rode my FS, 2×10 mountain bike with wide bars on last week’s in-town ride – I was really missing those narrow bars and the climbing power of my hardtail.

At some point it seems mountain bike technologies got ahead of the trails themselves – suddenly bikes offered as much suspension travel as you could want with brakes that were capable of stopping a compact car. Riders started looking for certain challenges – faster speeds, bigger obstacles – that hiking trails just couldn’t offer. And so trail builders started looking at ways to build trails that fit our bikes. 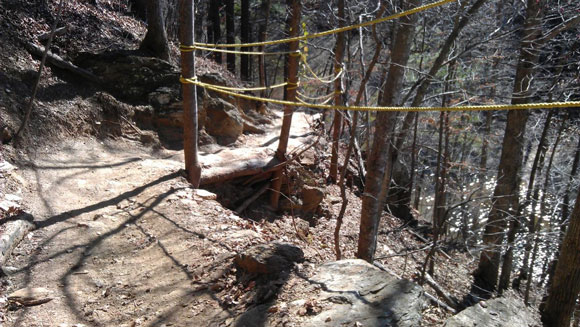 Here’s the perfect example from right here in Georgia, not far from metro Atlanta. SORBA Woodstock, the club that maintains the popular Blankets Creek trail system, is making some changes to one of the more difficult trails. Here’s how they explain the impetus behind the upgraded trail (read the full article here):

Enter the new age of the All Mountain bike. Recent technological advancements in carbon and air suspension have reduced bike weights to the high 20 pound range with the plushness of at least 5 inches of travel. Most shops agree this is the sweet spot right now. Folks can now climb up the mountain with ease with a new desire to point it downhill and let the 5+ inches of travel do the work. They need a new playground.

When I first read this I thought it was an April Fool’s joke – especially the idea that there should/could be a playground for all-mountain bikes right here in the north Georgia Piedmont. Or that, because a lot of people are buying 5-inch bikes, they need a place (nearby) to ride them. But the more I thought about it, the more I realized this has been happening for a few years now – and that it’s actually made mountain biking more fun.

Just look at the explosion of “purpose-built” mountain bike trail projects around the country or even the addition of pump tracks at many local trailheads. Clearly making these trails enjoyable for mountain bikers is a big part of why the trails are being built. Riding a trail isn’t as much about the challenge anymore or the sense of accomplishment you get for cleaning a trail that wasn’t meant for bikes to begin with – instead, it’s all about having fun while being active.

So, is allowing mountain bikes to come before the trail a good thing or a bad thing? I suppose it all depends on how you view the relationship between bikes and trails. The good news is there are still plenty of “wild” trails out there to challenge die-hard trail-before-bike’ers but there are also dozens of purpose-built trails popping up just about everywhere you can imagine. So maybe we can have it both ways – bikes and trails in a continuous feedback loop, upping the challenge and enjoyment for years to come!

Which comes first for you: the bike or the trail?

Singletracks
European vs. North American Singletrack: Thankfully, There are Differences to...

I’m currently involved in the development of about eight miles of multi-use singletrack. Wherever feasible, I try to build with bikes in mind. That is, I make sure that there is more of a roller-coaster feel by putting in swoops and rollers, etc. The trails are still usable and enjoyabe by hikers and equestrians, but provide more fun for bikers than your typical “old school” trail.

Great post. I rode VanMichael going in both directions this weekend… Some of the new turns are sweet..you can keep your speed up on their NASCAResque berms.. I find them to be a great reward for some of those grinding climbs. Blankets Creek still has the South Loop for a more technical churn. Its all just evolution. One day the trails will be asphalt with stamped concrete logs and rocks to go over and a snack bar at the halfway point.

One day the trails will be asphalt with stamped concrete logs and rocks to go over and a snack bar at the halfway point.

That’s awesome – a dystopian vision of mountain biking in the year 2050. 🙂

Re: Dystopian vision of mountain biking,

“Which comes first for you: the bike or the trail?”

And I absolutely LOVE pump tracks (a definite bike before trail track). So much fun and such a great full-body workout. I liked them when I first rode one, but when I was out on my local trail and saw a pump line uphill, I was absolutely hooked. Riding the pump tracks definitely improved the way I rode out on the trail

Regarding the dystopian vision…the snack bar sounds interesting, but I’ll pass on the concrete 😆

The Van Michael trail will have a hair cut hut instead of snacks though.. (Blankets Creek inside joke)