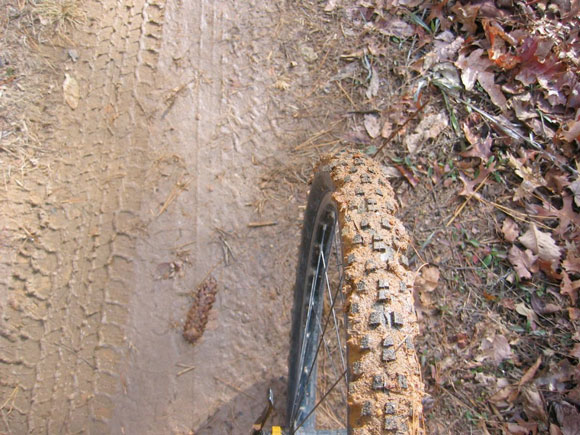 It’s happened to everyone: you’ve been planning a ride for weeks, only for it to rain the day before the ride, closing the trails and crushing your plans. Or you’ve driven (or worse, flown!) to shred epic singletrack and upon your arrival, you find the trail is a mud hole.

There’s certainly an art to predicting trail conditions. Local riders learn over time which trails drain better than others. Amateur meteorologists study rainfall totals and ambient temperatures to predict when trails will be suitably dry. Many of us just go with our gut and figure, hey, it’s been a while since it rained–the trails must be dry by now!

Singletracks has been collecting trail condition assessments from mountain bikers all over the world for about a year now, and some interesting patterns are starting to arise. The following examples show trail condition changes over a roughly 1-year period for two trails where we received 60-160 status updates during the year (that’s about one update every 2-5 days). 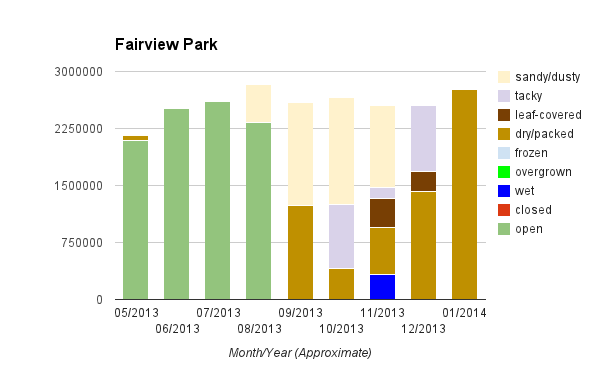 At Fairview Park in Costa Mesa, CA, it looks like conditions are pretty good year round! In August of last year we switched to subjective trail condition reporting as opposed to a simple open/closed status, which is reflected in the green bars on the left side of the chart.

Things stayed pretty dry and dusty in August and September but by October, conditions transitioned to tacky and hardpack. There was even a short stretch where the trails were wet–which riders should try to avoid. And it looks like the leaves came down around November; by January they were gone. 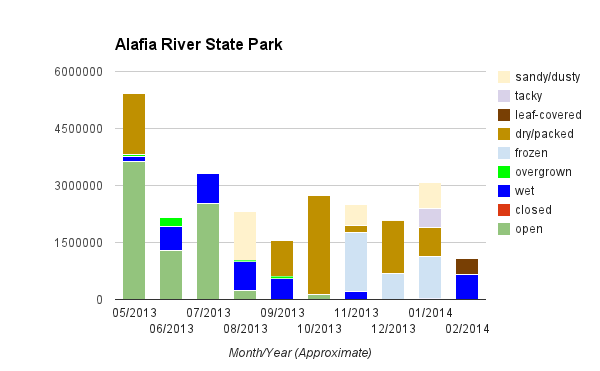 I recently planned a trip to Alafia, so this one is pretty useful to me personally. I see the trails get wet fairly regularly, especially in the summer. From November through January things were frozen (does it really freeze in Florida? see below), but so far February is looking a little wet.

Anyway, based on this chart the ideal time to ride Alafia is probably in October when it seems the trails are in the best shape. Oh, and if I decide to ride in June (who does this in Florida?) I’ll bring some hand pruners, just in case.

I’ve already mentioned the biggest limitation to the accuracy of Singletracks trail conditions reporting, update frequency, but there are other issues as well.

Reporters aren’t always reliable. In one data set we looked at for a trail in Florida, there were a couple reports of frozen trails in July and August (ha!). In fact, reliability is the reason we removed “open” and “closed” statuses; land managers weren’t comfortable with unofficial reports on official statuses.

Conditions are also open to interpretation. When does a trail go from being wet to tacky? It’s also possible a trail is wet and leaf covered at the same time… but the reporter has to pick the most applicable status.

Not only is this data potentially useful for mountain bikers planning trips, but it can also be an indicator of problems with trails that don’t drain properly or are under-maintained. Singletracks continues to collect trail status updates via our mobile app and we want to hear from you: how would you like to see trail data collection improved and distributed?

Beginners
Get A Grip: 5 Tips For Mountain Biking Slick Trails
Training
Running Stairs in the Winter is a Great Off-season Workout
Beginners
Too Wet To Ride Your Favorite Trail? Do This Instead.
Opinion
Beat the Season: Is it Ever OK to Ride Muddy...

It is fantastic that you are gathering and analyzing these data. I think a trail conditions website/app would be a really useful tool if there was verifiable, consistent, accuracy.

Another limitation I have found is that many, if not most, times I tried to change the status of a trail from one thing to another, the status would still show the original condition. I eventually got frustrated and stopped updating statuses, and instead wrote quick trail reviews to update. I think this glitch may have been fixed, because I just updated some trail statuses now and they seemed to change/work.

Using smartphones is ideal to update, but I’ve also noticed that great trails often have poor service, and unless you remember to update when you get back to your home/car, you may forget. This is also another barrier to accurate data. It may be a little big-brotherish, but if can link an app like Strava to Singletracks (and we did), maybe we can program a function (that you can toggle on/off) that tracks that you were at a certain trail, automatically give your “badges”, and ask you what the trail conditions were. This could happen when you upload your Garmin data to the web as well, which would make it super-easy to update trail conditions.

Lastly, I think we should maybe tweak some of the trail conditions descriptions. What does “frozen” mean? Is it icy and un-ridable, or a fat-bikers paradise of packed powder and snow? “Leaf-covered”: don’t bother because you can’t see the singletrack, or a majestic trail reminiscent of scenes from the Shire? Plus, “sandy” and “dusty” shouldn’t be lumped together…I’ll ride dusty trails any day, but sand stinks.

Sometimes, for example, if a trail is mostly dry and excellent, but a few sections are a wet, muddy, mess, I don’t know what to pick to update it. I realize that we can’t have a drop down list of 20 things, but does anyone have any suggestions of things they think would be more accurate trail nomenclature? Examples:

“Using smartphones is ideal to update, but I’ve also noticed that great trails often have poor service, and unless you remember to update when you get back to your home/car, you may forget. This is also another barrier to accurate data. It may be a little big-brotherish, but if can link an app like Strava to Singletracks (and we did), maybe we can program a function (that you can toggle on/off) that tracks that you were at a certain trail, automatically give your “badges”, and ask you what the trail conditions were. This could happen when you upload your Garmin data to the web as well, which would make it super-easy to update trail conditions. ”

Well, we recently rolled out just such a feature 🙂 Now, if your tracker page is linked to Strava, we send you an email after your ride is complete and ask you how the trail conditions were. This way, you can update the trail condition once you’ve gotten home, showered, and are drinking your post-ride beer. No more messing around with spotty cell service at the trailhead!

Ha! love it when I think of a good idea that someone already though of 🙂 At least I’m using my noodle. Honestly, after so many frustrations with service and the app, I have not used the singletrack app except to read Article content. I’ll start checking out the features.

Question: My phone tanks quickly on rides using Strava/GPS, so I ONLY upload my Garmin gpx files to Strava.com after a ride. I joined the Strava Singletracks app, so how do I link the tracker to give me those reminders?

So does this mean that if I forget to check in at the trailhead with my singletracks app that I still get a “check in” (and the associated badges) since it is linked to my Strava account?

@jkdouglas, yes! In fact, it means you don’t even have to check in at the trailhead if you don’t want to 🙂

Agreed, there’s definitely an opportunity to tweak the choices a bit. We’ll sit down and tweak the list to cover a wider range of conditions.

At one time we considered making the trail status an open field, similar to the old Facebook statuses (Porcupine Rim is _______). But then it would be tough to analyze the data since statuses would be inconsistent.

Any chance in the future you will link Singletracks with Runtastic Mountain Bike app? That is the app I use mostly to track my rides. Just curious?

I really like the trail check-in and the trail status features on the mobile app. It is a cool way to keep up with your rides and to see what other people say about the trail.

I think it would be great if you put the trail check-ins and the status updates somewhere other than the latest news section of your home page though. I really liked it when you could see the latest forum entries and that seems to be all but drowned out by the trail check-ins. It is great that people are out riding and I am really happy for them, but the place to check that out should be in a “Latest Trail Check-ins / Trail Status” section.

Others could chime in here, I just wanted to offer a suggestion. I really miss the ability to quickly see the latest forum posts on the home page.

Agreed–I was thinking the same thing. We’re always dialing in the news feed filters and as check-ins are becoming more popular they’re definitely starting to drown out some of the other great content that’s being shared!

One note: you can load more items in the news feed by using the “load more” link at the bottom. This way you can quickly go through the feed to see if there is anything you missed.

I think there is one more issue with knowing the trends of the conditions of the trails. Lets say it rains in my area or the snow is still melting which makes the trail wet/muddy so I don’t go out and ride. Since I only update the trail status when I check in, a lot of valuable information is not reported to Singletracks. While there is no solution besides me logging on and updating the trail status, it is something to think about.

I guess the other way to think about it is that if the trail isn’t being ridden, i.e. there are no checkins, that the trail is not in good shape during this time. This would ultimately only work on trails that get regular checkins.