On Wednesday, August 24 the USA Pro Cycling Challenge (USAPCC) will run 131.1 miles from Gunnison to Aspen, taking riders to the highest point of the entire race – Cottonwood Pass at 12,126 feet. For former mountain bikers in the peloton like Cadel Evans, this stage offers up the race’s only dirt road section on the ascent up Cottonwood. Riding road bikes on dirt was common in the early days of the Tour de France but for such a large, modern race it’s a bit unusual. I can’t wait to see how the roadies handle the dust and gravel! And all bets are off if there’s an afternoon thunderstorm.

Beyond Cottonwood Pass there’s another 12,000+ climb to Independence Pass before the descent into Aspen. Festivities are planned for the finish area in Aspen including live music, food, crafts, and a beer garden. 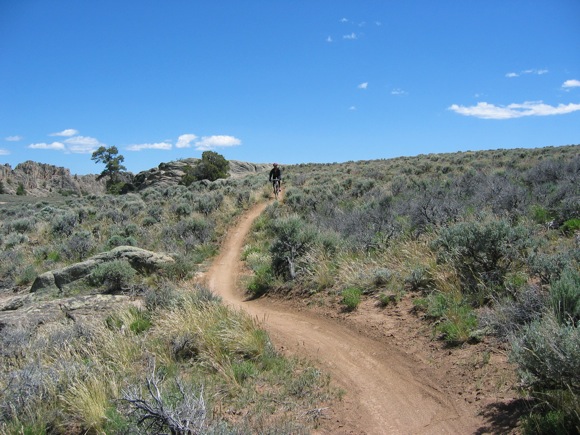 With a (relatively early) start in Gunnison at 10am, spectators will have some time to hit the mountain bike trails at Hartman Rocks before a late lunch. Hartman Rocks may not be what most folks imagine when they think of mountain biking in Colorado. There aren’t really any trees here – the exposed hills are dotted with sage brush and that’s about it. But the trails themselves are fast and the network is extensive with ribbons of trail heading off into the horizon in every direction. If it’s a hot day you may want to skip Hartman Rocks but in winter this place is heaven sent since it stays dry and snow-free nearly year round. 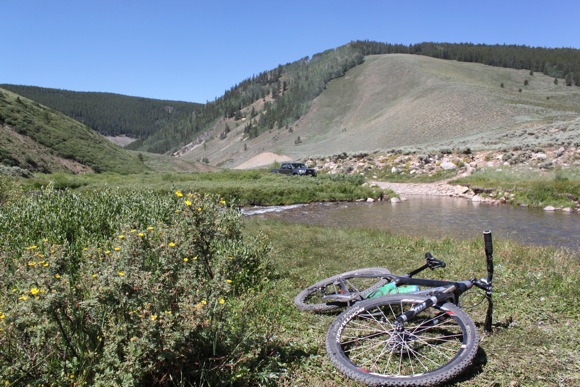 On Wednesday I got a chance to ride Doctor Park for the first time. The trailhead is located on CO Hwy 742 which happens to be part of the Stage 2 climb up to Cottonwood Pass. My guides, Dave Ochs and Aaron “Huck” Huckstep, were both on singlespeed mountain bikes and were gracious enough to stay with me on the mostly gradual 12 mile climb to the top of the ride. Both guys ended up riding the Leadville 100 on Saturday and finished in the top 20%!

I was riding a FS Specialized Stumpjumper with a dropper-style seatpost and on the road climb the seat kept dropping randomly. After several attempts at fixing the problem, Ochs tweaked the cable tension for me and the seatpost was solid for the rest of the climb. Even on a mountain bike I could tell the road the racers will be riding is rough. Maybe not cobblestone rough but still not fun on a fully rigid carbon rig with rock-hard, skinny tires.

After just a few minutes on Hwy 742 we turned right onto Hwy 744 and began the ascent. The paved road quickly gave way to dirt and gravel and aside from a few short sections, the climb was manageable. Just before we turned off Hwy 744, Huck pointed out one of the Reno / Flag / Deadman trailheads to our left. Shortly afterward we turned right and waded across a cold mountain stream to begin the climb in earnest.

From this point things got steeper and I was in the easiest gear I could find on my 2×10 drivetrain for most of the climb. The track is really a wide jeep road at this point and climbs through a beautiful meadow with mountain vistas all around. Admittedly, though, I was mostly looking at my front wheel and the orange ribbon of dirt directly in front of me. We eventually eased over an exposed ridge which I hoped was the top, only to continue climbing into the trees.

Once in the trees the trail became rutted and rooty and continued to climb slightly. After a mile or so we popped out in another meadow and met up with a couple of riders from Boulder who had climbed the opposite direction on the sweet singletrack we were about to enjoy. 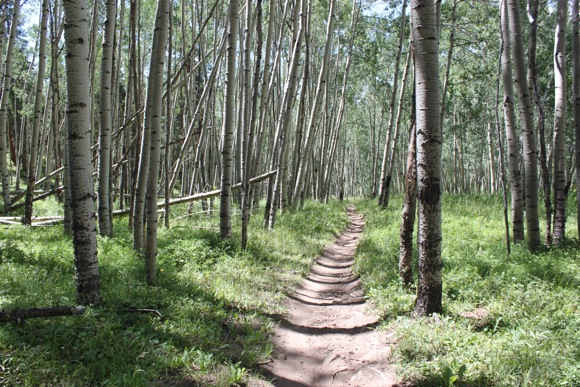 From this point on things became sort of a blur to me. Ochs describes the trail as feeling like something out of Star Wars with “wildflower lasers” pinging your eyes all the way down the trail – and that’s a good way to put it. Near the top of the descent things are a little tricky – a narrow singletrack trough through the meadow yields to a loose, steep, and rocky section in the woods. But then somehow things mellow out and you’re left with a fast, smooth run through Aspen trees and wildflowers that rivals any trail I’ve ever ridden. I nearly lost it a few times as I adjusted my rhythm to the short rollers stacked one after another. 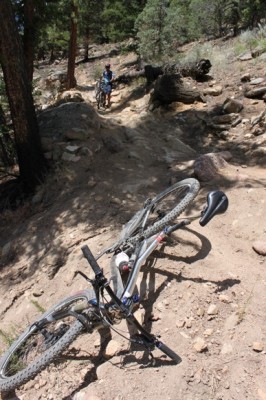 After a solid 3 miles of this the scenery changed again to Ponderosa pine and sage as the trail turned down steeply through a recent controlled burn area. The last mile or so to the parking lot was steep and technical and after cleaning a particularly nasty section I nearly rode right off the edge of the trail in the loose soil (see crash site photo above). Somehow I managed to jump off the bike and ran down the hill, the second time I used this move during my trip (the first was on a switchback on the Silver Creek trail on the Monarch Crest route). Aside from that near disaster I managed to clean the entire descent which felt great once I was at the bottom.

As one singletracks reviewer put it, “call the Doctor because this trail is sick!”

In Almont, CO the road racers will turn off Hwy 135 and onto CO 742 where there’s a restaurant at the crossroads that serves burgers: beef, elk, and buffalo. This is a popular spot for rafters so there’s always a good crowd out on the patio. There are also plenty of restaurants to choose from in Gunnison and Aspen.

If you’re following the race all week, this section offers a good opportunity for staying in the same hotel for two nights rather than having to pack up after just a single night. Stay in Gunnison or even Crested Butte – you can take a shortcut from CB to the course and the Doctor Park trail via Jacks Cabin Cutoff.

Gunnison, CO is home to endurance rider Dave Wiens, 6-time Leadville 100 winner and the only person to beat Lance Armstrong in that race. Word is he and his wife usually come out to support riders each September during the Vapor Trail 125 mountain bike race organized by the folks at Absolute Bikes in Salida.

Up next: Vail, Avon, and Steamboat Springs.

Trails
Listen to the Aspens Quake: A Mountain Biker's Guide to...
Trails
Ride Report: Doctor's Park, Crested Butte, CO
Trails
All of the Epic Destinations We Wrote About in 2015...
Trails
Dispersed Camping to be Limited in Crested Butte Starting This...

Gear
In for Test: Mullet Cycles' Single-Pivot 150mm Peacemaker
Gear
Get Away from It All with These Bikepacking Picks
Community
Rooted Vermont: Business Up Front, Party in the Back—And All...
Progression
MTB Coach Shares How to Time Mountain Bike Jumps and...
Subscribe
Login
Please login to comment
3 Comments
Most Voted
Newest Oldest
Inline Feedbacks
View all comments

In your experience, how would you say Hartman Rocks stacks up against Fruita and Moab? I met a local in CB that claimed Hartmans was at least as good as Fruita and possibly as good as Moab, although not quite as expansive. Since I haven’t ridden any of these places… what do you think?

Well… I probably rode less than a quarter of Hartman Rocks many years ago but just based on the topography you aren’t going to get as many long descents out there as you will in Fruita on the Bookcliff side. The topography IS similar to Moab, though there aren’t as many rocks/ledges so you won’t find anything like say Porcupine Rim or Slickrock.

If we’re just talking about pure subjective rankings, Hartman is at the bottom of my list of those three, though it’s definitely an underrated destination. I liken it to Palmer Park in Colorado Springs, though much, much bigger.

Hmm, ok, thanks for the insights!