Before I met my wife, the entire state of Georgia rarely crossed my mind. I knew nothing about it, except for its geographic location and the fact that it was one of the 13 original colonies. Moving to Georgia never occurred to me as a possible course for my life… not even in my wildest dreams!

As you might imagine, I had never thought about the prospect of mountain biking in this state either. Sure, I had heard of the legendary riding in North Carolina and West Virginia, but Georgia? C’mon now.

Having lived here for more than 2 years now I can personally attest to the fact that life will take you places that you’ve never dreamed you would go, and that Georgia is a mountain biking hotbed. Specifically, North Georgia is the place to be. While the bottom three-quarters of the state are really quite flat, the upper quarter bordering North Carolina and Tennessee contains legitimate mountains… and legitimate mountain bike trails. Add in a mostly year-round riding season and active trail clubs and you have a formula for great mountain biking. 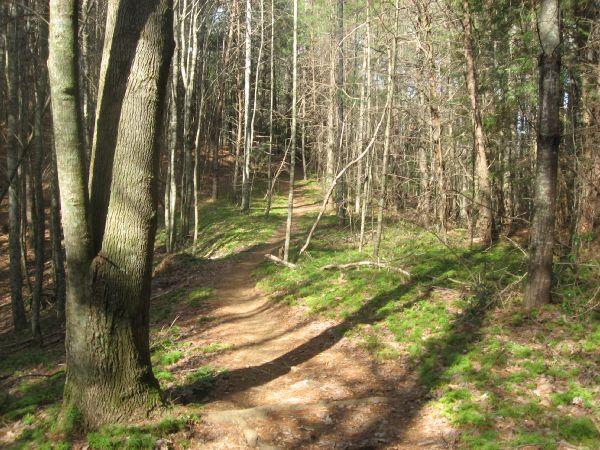 The Pinhoti trail is a massive, mostly singletrack trail that stretches from the upper reaches of North-Central Georgia all the way down to Central Alabama. The trail is 330 miles in length, and Georgia contains 164 of those miles. Unlike many trails of this scale in the eastern US, most of the Pinhoti trail in Georgia is open to mountain bikes.

As you might expect, IMBA (the International Mountain Bicycling Association) recently bestowed the venerable title of “Epic” to the Pinhoti. The word is out, and everyone knows what an extraordinary ride this is.

Due to its length, it would be nearly impossible to write a concise review of the entire Pinhoti trail. Some of the sections further to the south and west near Dalton are considered to be some of the most technical mountain biking in the state. The sections near Ellijay are beautifully-constructed, narrow singletrack and unlike the sections around Dalton, they are relatively smooth and fast.

If there’s one thing that you can be sure of when riding the Pinhoti, it’s that you’ll definitely be doing a lot of climbing and a lot of descending… and you’ll probably love every minute of it! 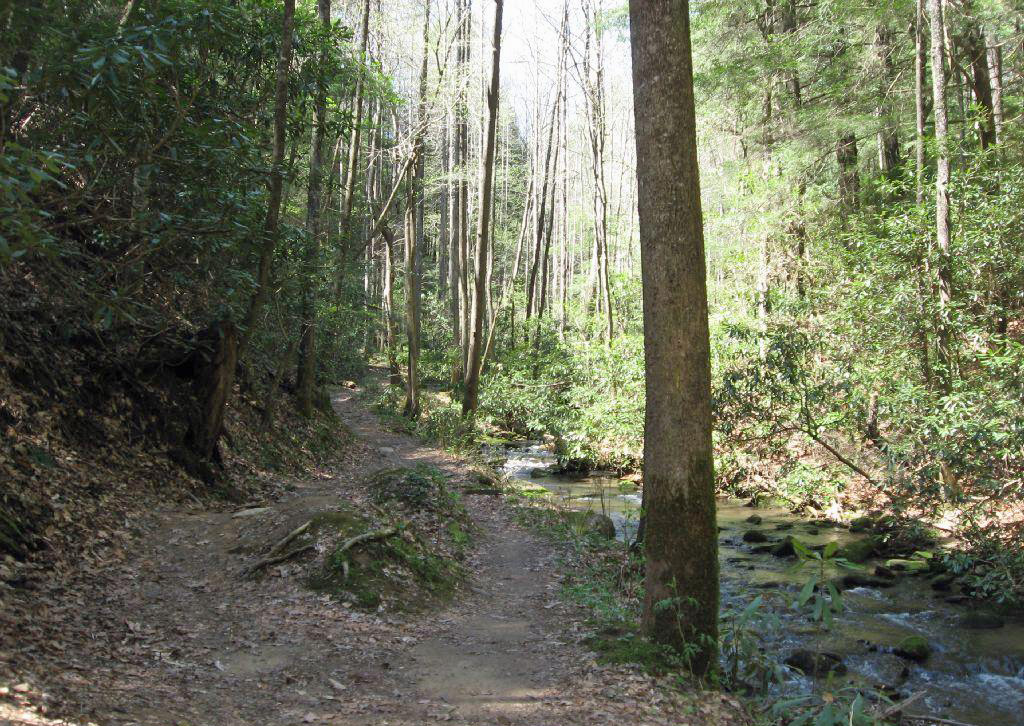 It doesn’t seem fair that Ellijay should have so many incredible trails in such a relatively small area… but they do. Another classic ride, the Bear Creek trail intersects the Pinhoti trail here (mentioned above).

The Bear Creek trail lies in a gorgeous section of the Chattahoochee National Forest and many different factors contribute its scenic nature: Bear Creek tumbling alongside the trail, the mighty Gennett Poplar, and the scenic overlook of the Cohuttas found at the top of the trail.

Not only is this ride stunningly beautiful, but the trail is a blast to pedal on as well. This is a simple out-and-back, with the singletrack climbing steadily for 5 miles. Then at the top, you get to turn around and bomb back down. The descent back down Bear Creek is fast, amazingly flowy, and best of all it is uninterrupted. Continuous downhills of this length are pretty rare here in North Georgia! 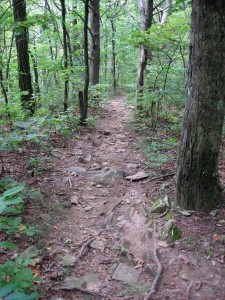 While this is just one trail in the Aska Trail System, Stanley Gap is definitely the crown jewel of the Blue Ridge area. Best ridden as an out-and-back, the trail climbs steeply from the Deep Gap parking lot all the way up to the high point, and then descends back down a little ways to Stanley Gap.

After turning around and climbing back up that shorter section, the main downhill back down to the start is your true reward… and it is to die for! The speeds you can achieve dropping down this steep, steep section of trail can honestly be scary: make sure you either bring the balls or the skills to deal with the tight trees, big rocks, and sudden turns whipping past at mach 5! 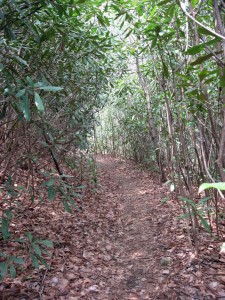 Since this trail is practically in my backyard, there is a special place in my heart reserved for the Bull Mountain trail and the surrounding trail system.

Admittedly, the standard 11-mile Bull Mountain loop isn’t the best singletrack ride in the world. Much of the climbing takes place on old roads and doubletrack. However, the descent back down more than makes up for it! Expect rocks, rocks, and more rocks, high speeds, rhododendron tunnels, and the need to pick bugs out of your teeth after grinning all the way down.

In my opinion, two of the greatest things about the Bull Mountain loop are the large amount of elevation gain (and loss), and the remote feeling in the outer reaches of the loop. Up on the high Bare Hare trail, I always feel as if I am totally removed from civilization. It’s just me, my bike, and the mountain peaks!

I recommend adding in this approach trail to turn it into a 17 mile lariat. 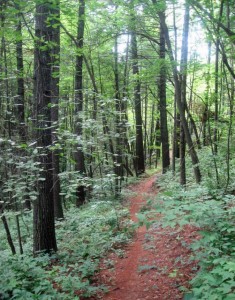 Stonewall Falls is one of the only legitimate singletrack mountain bike trails in the northeastern corner of the state, and it is definitely worth a little bit of a drive to reach it. This 11+ mile loop is a challenging ride that will at least stretch you physically if it doesn’t test your bike handling skills.

In short, this trail never feels like it is on flat land. It is either climbing a hill or descending the other side. There is no break, there is no respite: your heart will be going the entire time!

In the end, the descents, narrow singletrack, and beautiful forests make all of the pain worthwhile. As a grand finale, Stonewall Falls sits at the very end of the loop, signaling the end of your ride from far off with its roaring water: a fitting end to a mountain bike trail in Georgia.

I’ve done enough writing, now it is time to hear from you: Have you ridden in North Georgia? What’s your favorite trail?

If you haven’t been here, what is your favorite trail where you live?

I love the trails you mentioned. One of my favorite GA trails is Sumac Creek. It’s a bit hard to find, but worth it when you get there.

+1 on Pinhoti. Only section I’ve ridden is the 17 mile Snake Creek Gap TT course, but I want to ride more.

@darrengriffith, thanks! I haven’t ridden Sumac Creek… now I’ll definitely have to check it out!

@Dustin Gaddis, Yeah the Pinhoti is killer! I haven’t ridden the Snake Creek Gap section yet, but I really want to!

^^^ 😆 My favorite is windy gap by far! It has the technical and flowing downhill.

I was really debating whether to include Windy Gap or Stonewall Falls. I absolutely loved Windy Gap, but it is a really long drive to shuttle, and I don’t think I would really want to pedal up that trail. Also, I wanted to throw Stonewall Falls in there as it is a really great ride, and IMO is the only nice trail in the northeastern portion of the state (And Ellijay already had 2 trails listed).

If I had 6 choices though, Windy Gap would have been on there!

Yeah. Climbing windy gap is a bad idea. GoldenGoose and I tried it. It kicked our ass! Was mostly hike a bike up gigantic rocks because at the milks intersection, it says motorcyles only past the point climbing…

I did stanley’s gap a last year, and it has to be one of the most difficult climbs ever. I had to stop and grab a tree and rest every 15 min or so. But like Goo says, the downhill is amazingly fast!!!, I even found my balls attached to my chin when half of my rear tire was out of the trail during a turn.

@dozzerboy, that stinks dude, so you did all the hike-a-bike for nothing? Well I guess you must have gotten some downhill out of it…

@ziraga, Yeah dude that trail is intense! I always feel like I’m going about mach-5 down it, but it’s so exposed, and some of the trees are so close to the trail, your handling has to be absolutely precise! Haha, that’s what mountain biking is all about though, no?

sounds like i’m going to n. georgia for vacation this summer

Ha! I was born, raised and still live in Dalton. One of my favorite rides has long been to climb Windy Gap, take the right onto Milma and then either climb to the top of Grassy Mountain up Tibbs Trail or bomb down Tibbs where it connects to FS68 at the base of Grassy. You also left off Mountaintown Trail. Maybe the most remote and beautiful of all trails in the state. Then there’s Fort Mountain trails and the start of some development of offshoot trails along the Pinhoti such as Pilcher’s Pond and the brand new, soon to be officially opened, Dry Creek Trail Network. Beyond these and others I’ve failed to mention, one can drive a few miles over the TN state line and take in the Raccoon Mtn trails, Enterprise South Nature Trail Network, Chilhowee, Tanasi, and on, and on, and on. 😉

Thanks for posting this. Having hiked in most of these areas, I was impressed by the beauty of N. Ga. I can’t wait to go back with my bike!

Guess Ill have to head to Clayton…sounds amazing. Hit all the others and feel pretty darned lucky to live in N GA
I consider stanley gap my home trail. first rode it way back in 1998. Probably the reason my husband and I bailed on our first career and headed north to Georgia. I ride the trails year round, year after year.
Stanley is awesome and will kick your butt however the other trails in the same area can be connected to make the trip to Blue Ridge worth the drive. There is a loop to be done that does include some road but so worth it to include flat creek, green mountain and long branch. All as amazing as stanley. Flat creek downhill rivals any trail in N GA and only adds 5 miles with a 2 mile non techy climb that allows less experienced riders to get a taste of the area. Green mountain to long branch is another screaming descent that the the payback for a short non techy climb is worth mention. Either direction on the loop will offer two very different rides…If you connect all the trails in one ride, you will really appreciate the the road segment to give your body a break…If you start and end your ride at the “rapids” on the Toccoa river, you get the added bonus of one of the best swimming holes around…
There are tons of cabin rentals with very easy access to trail, river, lake and a very cute downtown to top it off.

I like all the trails you mentioned but haven’t been to Clayton. Might have to schedule that into next trip down. Love the Bull area and the gravel road riding, with so many loops to choose from can make an epic day. I have ridden all of the Aska trail system in a day including the turkey farm logging road loop. I will move to this area in a heart beat if and when I can.