Sandy Ridge: the trail I love to hate. Why? Because Sandy is just so damn good. So you’ll do like I did and ride there week after week until you’re sick of it. You’ll then swear it off like an old man trying to send back soup in a deli, only to return just weeks later to its sweet, irresistible goodness, leaving you looking like the cat that ate the canary.

But love it or hate it, you must respect Sandy Ridge, but not solely for its richness consisting of both raw, hand-built trails and flowy, machined singletrack, appealing to riders of every skill level; berm-filled descents, stretches of tabletop jump lines, and reverse-grade roller coasters. Local riders bow to Sandy for saving Portland-area mountain biking.

Instead of reporting on how badass Sandy is, how much fun you’re going to have, how to jazz up the trails for the best time, and where to eat and drink–my usual Hood Report format–I want to tell Sandy’s story.

The City of Portland, OR, within its proper borders, has over 10,000 acres of wild space… none of which contain any significant stretches of singletrack. Last year, mountain bikers were blindsided and stripped from the only place you could ride your mountain bike in Portland on actual singletrack, after a midnight meeting amongst equally-blinded politicians. Nowadays, if you live in Portland, the closest place to ride (and I mean really ride) is a 35ish-mile, hour-long commute to the Sandy Ridge Trailhead. And that’s if you live east of the Willamette River!

After removal of the Marmot Dam, land owners Portland General Electric were prompted to sell 3,000 acres along a ridge west of Mount Hood above the Sandy River, and the Bureau of Land Management (BLM) went forward with the acquisition in 2001. It was no surprise then, after a 2006 wilderness expansion near Portland shut down nearly 125 miles to mountain bikers, the results of studies, surveys, and public meetings conducted by the BLM concluded that mountain biking would top the list of priorities in regards to how to best utilize the newly-acquired plot.

With the help of IMBA, Northwest Trail Alliance, and other interested groups like AntFarm YouthCore, planning commenced on what would later be deemed as one of the most innovative mountain bike trail systems on public land.

Sandy Ridge officially opened in 2010 with what remains to this day the network’s flagship trail, the 3.5-mile Hide & Seek descent–a rugged and rooty upper section transitioning to hard pack flow the further down you descend.

Over the next three years, Sandy enjoyed a three-fold increase in rider visits as the number of trail visits launched from 10,000 to over 30,000 per year. As trails were added, ridership continued to grow exponentially, and the most recent data suggests nearly 125,000 people rode Sandy Ridge in 2015.

July 2013 marked a milestone in Sandy Ridge’s history with the opening of Follow the Leader, a double black diamond, and Flow Motion –a continuation of the former, but more mild in nature, and accessible from the road climb should riders opt to skip the double black beginning. With these two trails and a later addition of flow trail in 2014, Laura’s Line, the Sandy Ridge network would reach its current mileage to just over 15.

Due to the lower elevation along the Mount Hood Corridor (west of Mount Hood) in the Cascade Range, Sandy is usually rideable most of the year, save a few weeks here and there when snow levels descend. Given its IMBA style, the trail holds up exceptionally well when wet, and I personally utilize Sandy as my go-to during the winter when other trails suffer from the enormity of Pacific Northwest rainfall.

Despite heavy year-round usage, Sandy Ridge is surprisingly easy (and cheap) to maintain thanks to well-executed planning, construction, and guidance from IMBA’s Trail Care Solutions crew. Of course, it’s not all in the construction, as the network’s popularity draws between 50-80 volunteers on any given trail work day.

So what’s next for the renowned trail whose overwhelming success conquered the local suppression of mountain biking and took Oregon riders by storm?

Clackamas County, wherein Sandy Ridge resides, is in final negotiations to sell 188 acres to the BLM. Local sources report the additional land will aide in building at least another two miles of trail to the existing Sandy network. Transfer of said land is expected to take place in September of this year. In times where it seems we lose more trail than build, this is a huge sigh of relief and a glimmer of hope for the future of mountain biking anywhere.

As for the ride report… go ride Sandy during your Oregon trip, but do it last, as you’re likely to be sucked in by its awesomeness, never to explore another Hood-area trail again.

Not for lack of decent places to eat along the Mount Hood Corridor and near the town of Sandy, OR, but given the parking lot layout and weekend vibe, StumptownRider says bring a grill, your own beer and share with others. 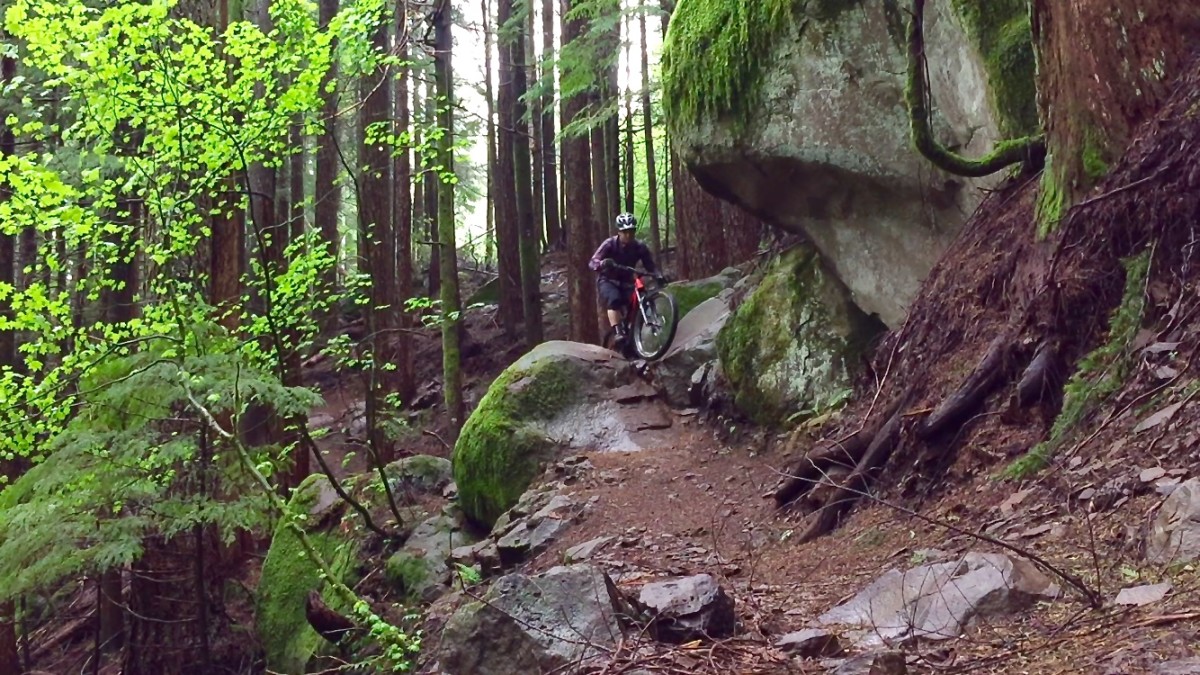