It’s not difficult to ring up an unforgettable mountain bike trip in Oregon. If you’ve never been, you’ll go to Bend, where hundreds of miles of singletrack surround one of the most outdoor-friendly towns in the U.S. After Bend, your next trip to Oregon will take you south, where thousands of feet of plunging through remote Cascadian mountain range await your brake pads in the town of Oakridge. These two epic destinations will never leave you hungry for more Beaver State, yet much of Oregon’s best singletrack, often over-looked, under-rated, and absolutely outstanding, is tucked away near Oregon’s northern border in the shadows of Mount Hood.

“The Hood Report” is a series of ride reports on trails and trail networks in the Mount Hood region, located along the Mount Hood corridor through the Hood River Valley along U.S. Route 26 in north central Oregon. If you’re just now rolling out with us on this, the second set of a multi-part series, catch up with The Hood Report – Part 1 (start here) and our introduction and overview on Hood-area riding. 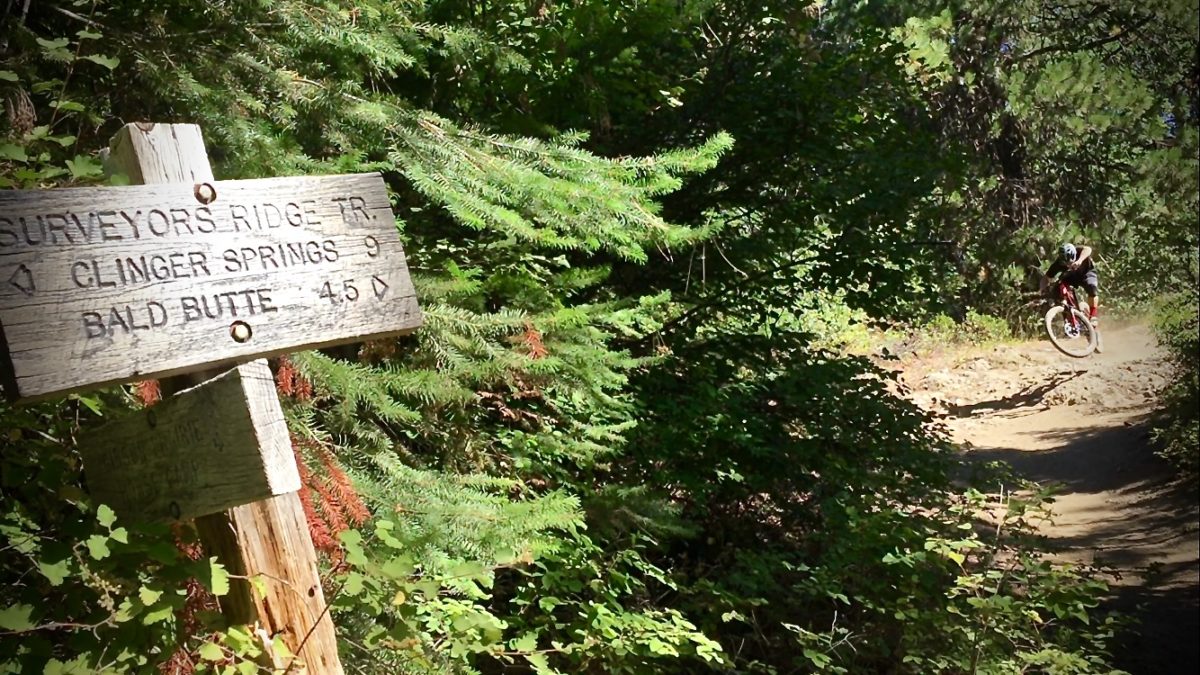 Traversing Surveyor’s Ridge has been billed by many a must-ride Oregon classic, but not for reasons you might think. While you will find a variety of surface and terrain from smooth needle-pack under thick forest to rugged mountain side exposure; impacted rock gardens, and swooping descents; the real reason to ride Surveyor’s Ridge is for the views of Mount Hood not found anywhere else by mountain bike in the Hood River area.

Surveyor’s proper begins at the top of the Dog River Trail–by itself, a six-mile, 2,000-foot ascending/descending trail–and runs north/south for 10 miles if you stop short of the the ridge’s descent. Surveyor’s is in constant undulation as it hops from one side of the ridge to the other, exchanging unparalleled panoramas of the vast Eastern Oregon backcountry with the lofty heights of Mount Hood. 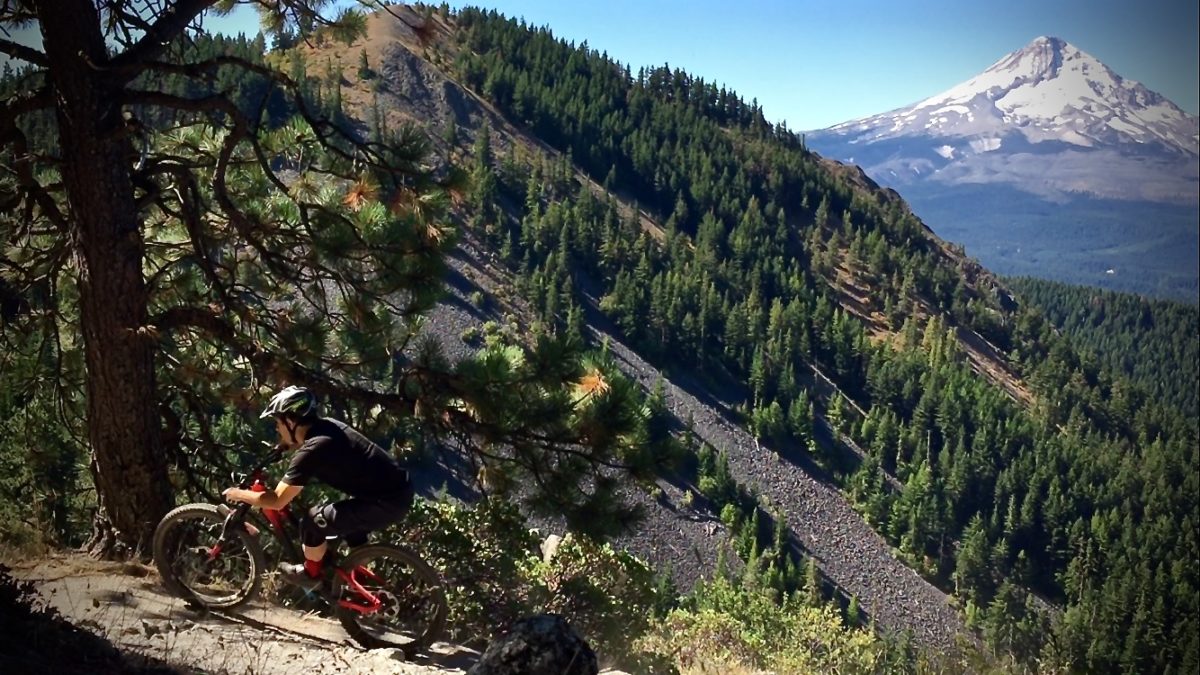 Surveyor’s leaves a little to be desired in terms of fun factor, as any descent along the ridge is too often met with short and sometimes steep grunts, keeping in check any chance for sustainable speeds. Just as fast as you enter a section of flowy goodness in the downhill direction, you are met with an equal but opposite pitch going uphill, interrupting the rhythm. But what Surveyor’s lacks in thrilling singletrack, it makes up for in views, which has added to my own perspective of what “fun” really is.

My sojourn atop Surveyor’s Ridge began by climbing the Dog River Trail, named so after an early party of starving travelers resorted to eating dog meat. After the arduous ascent and long out-and-back traverse along Surveyor’s, I too was hungry for some dog, but left the direct consumption to my Minions. Dog River is shuttle-friendly, with parking spots at the trail exit as well as the junction between it and Surveyor’s Ridge. 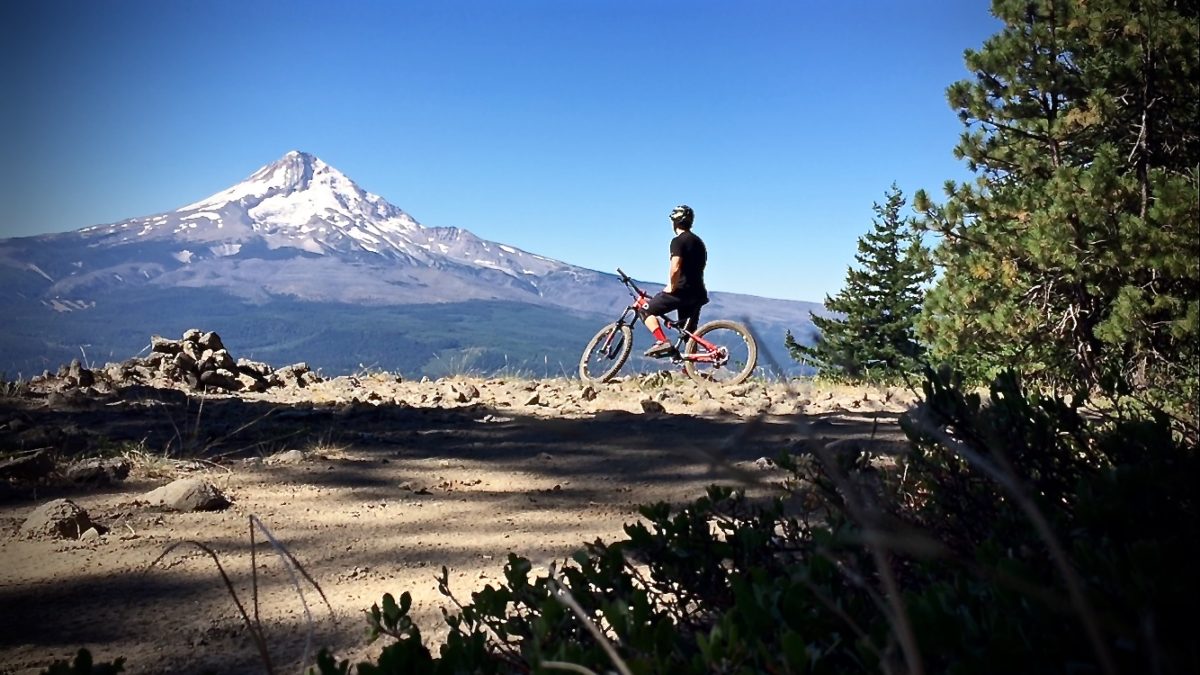 I accessed Surveyor’s Ridge by riding six miles up the Dog River Trail to where the two meet. Surveyor’s then takes you 1.6 miles to a fork where you’ll find a bit of disconnectivity. To the left continues an old doubletrack, circumventing a large mound, before continuing on to the ridgeline singletrack and, although not as enjoyable, more assuredly connects to the rest of the trail. To the right, there’s more singletrack, but it’s less intuitive due to a few service road interruptions, before dumping you out onto yet another road leading up to the ridge trail, for which I saw no signs (Strava map below shows both routes). Riding out and back before the steep plunge off the ridge is encouraged unless you’ve shuttled, but there are more options involving more or fewer miles, as well as the Oakridge Trail downhill.

Continuing beyond the 10-mile mark nets an additional three miles with 2,000 feet of descending as you land on the other side of the ridge. Halfway through that same descent is the option to descend left down the Oakridge Trail–a brake-burning plunge through tight switchbacks towards Highway 35. Given the sheer descent and overall mileage of Surveyor’s alone, these two options are usually done with a shuttle.

Many find climbing Dog River disagreeable, as it’s mostly shuttled in the downhill direction (especially on weekends). If this is the case for you, a small parking alcove rests where Dog River ends and Surveyor’s begins, making it easy to ride a Surveyor’s-only, 20-mile out-and-back. If shuttling, you might try leaving one car at the bottom of Dog River and the other at the Dog/Surveyor’s junction, starting with a long Surveyor’s out-and-back and a ripping Dog River descent. In all, that’s four options, three of which involve three separate downhill sections, for one trail system! 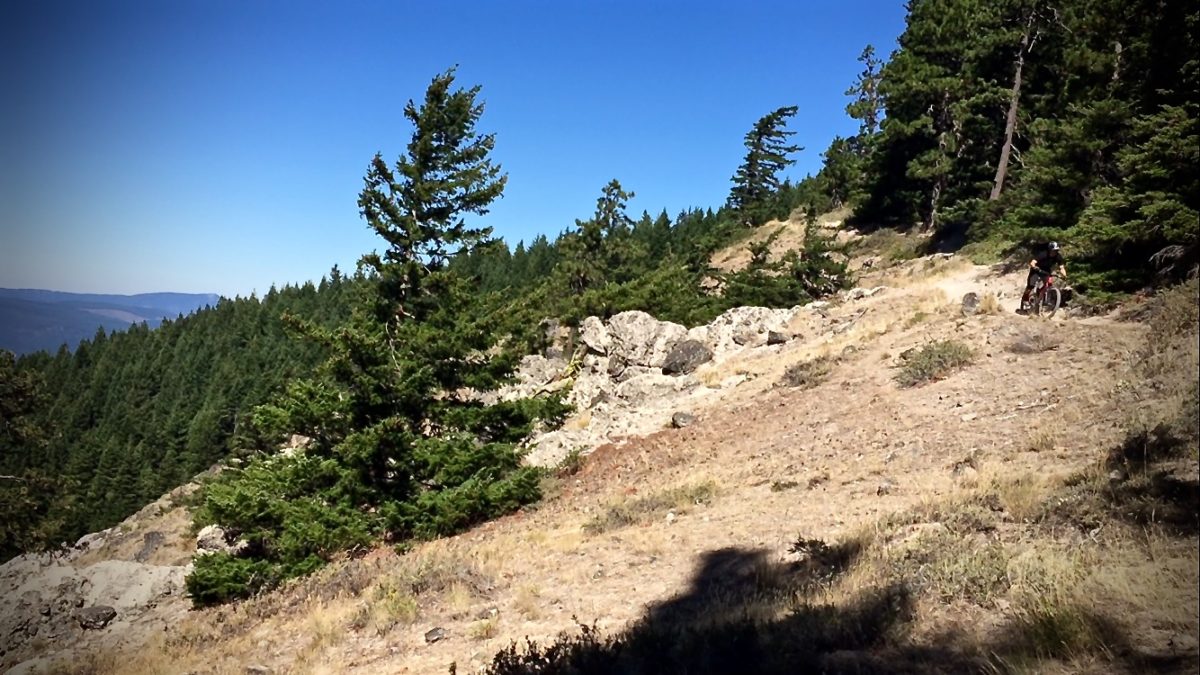 Few know bites and brews in Hood River like local riderKris Siewell (aka, @stumptownrider) and, after a sojourn on Surveyor’s and rip down Dog, he suggests popping over to pFriem Family Brewers for a blonde IPA and burger.

From Hood River, OR, travel 19 miles south on Highway 35, where you’ll find the entrance to the Dog River Trail on the left. To access Surveyor’s Ridge from the top of Dog River, go another 7 miles from the Dog River Trailhead and turn east on NFD Road 44. In another 3.5 miles, look for a small parking alcove on the left, which also serves as access to Clinger Campground. Please note: a Northwest Forest Pass is required when parking here.

The Hood Report is a series of ride reports on trails in the Mount Hood region located along the Mount Hood corridor through the Hood River Valley along U.S. Route 26 in north central Oregon. Read our introduction and overview on Hood-area riding here.

Thanks for the stroll down memory lane Chris! I lived in Portland from 2000 to 2004, rode Surveyors Ridge and the Dog River Trail several times. It is one of my favorite all time rides. The views are out of this world and the trail has the old school primitive feel. I always enjoyed the challenge as it’s not an engineered flow trail. I’m not a strong technical rider, I always felt a sense of accomplishment after riding Surveyors. I found spring and fall to be the best times of year to ride it, in mid summer your chocking on dust.

I’m always talking up the Mt. Hood area to my Florida friends. Lots of riding & post ride options.
I’ve got a NYC visitor next week; do you think the trails off Highway 35 will be rideable?