Most mountain bikers probably don’t know this but the “World’s Greatest” bike trail is located in Eagle, CO, less than 30 minutes from the well known ski resorts at Vail and Beaver Creek. What’s the name of this magical trail? I already told you: World’s Greatest.

Before heading to Eagle I picked up a map of the trails in the area and I immediately knew I had to ride the World’s Greatest trail, if for no other reason than the name itself. The short description included on my map says this ride is “considered one of Eagle’s best rides” which seemed like high praise, especially since a guy mudhunny met on the trails at Vail highly recommended the singletrack in Eagle. 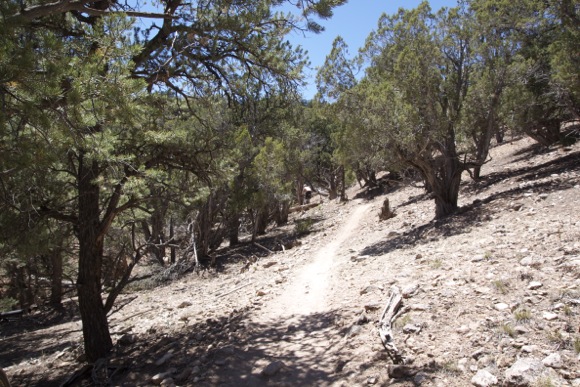 Based on the recommendations posted here on singletracks, I decided to make a loop out of the World’s Greatest with another trail called Abrams Ridge trail. After starting out on a paved, neighborhood bike path, the singletrack peeled off and up a dry, chalky ascent through thinly scattered scrub pine and sage brush. The ascent was fairly moderate, except for a few washed out troughs filled with chalk dust that were difficult to navigate at slow speeds.

As I stopped to take some pics a couple riders passed by and we exchanged greetings. Back on the bike, I eventually caught up with the guys and was hoping to tag along to make sure I didn’t miss the World’s Greatest trail. The first rider I approached said I should pass but I said no, you go ahead. He was adamant and added, “I just had knee surgery 3 months ago and this is my first ride since then.” I replied, while gasping for air, “I’m from Georgia so I guess we’re both handicapped!” 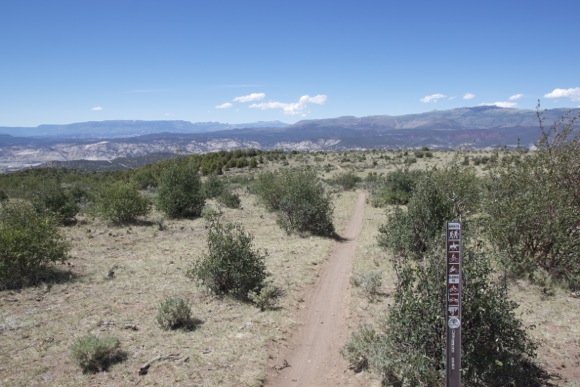 In the end he won so I passed both guys on the way to the top. Abrams Ridge dumped me out onto an exposed doubletrack where I was scanning to the right for any sign of singletrack. I passed an unmarked trail and chose the second singletrack on my right where there was a sign for “Worlds GDH.” I guessed the “GDH” stood for Greatest Downhill but I still wasn’t sure if it was the right trail. Then I saw the two riders cutting across the first singletrack I passed and joining the trail in front of me a bit farther down. This was it! 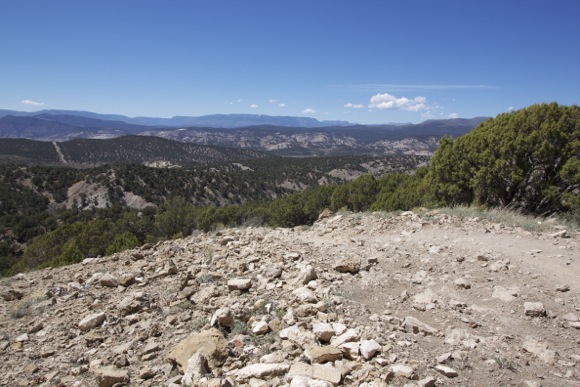 The World’s Greatest trail starts off pretty mellow with a little gravel over hardpack, eventually yielding to some steeper, rocky sections with incredible views. I stopped a couple times to take pics but I hadn’t seen anything special so far. Continuing on, the trail became steeper, more eroded, and covered with 6-12 inches of the finest talc I had ever seen on a trail. It was like riding through a narrow channel filled with baby powder! 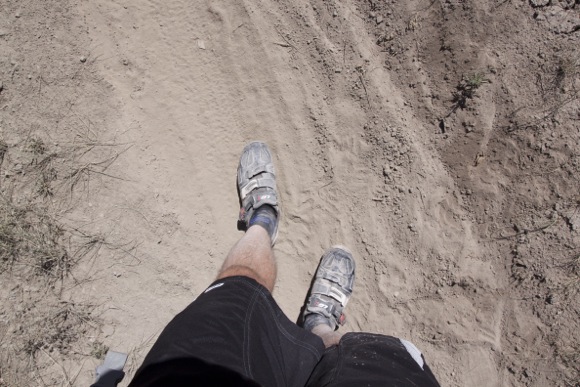 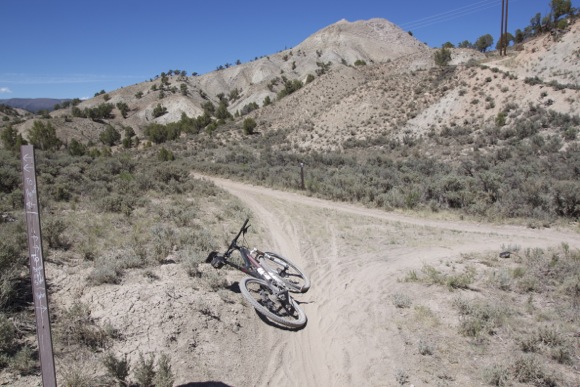 After a few miles the trail started to flatten out as it wound its way through a tree-less valley, eventually converging at a 3-way intersection with School House Rocks and Hockett Gulch. Was that it? Apparently so – the only way out seemed to be a climb up School House Rocks. Fortunately the climb was short and before I knew it, the trail dropped me back in the neighborhood. It was hard to believe that I had just ridden the World’s Greatest trail – and the ride was already over.

As I considered the name of the trail, my first thought was it was a bit of marketing to get riders to come to Eagle. Heck, I came to ride the trail just because of the name! But then I had another thought: perhaps it was named World’s Greatest to direct riders away from the other trails in town. Judging by the wear and tear on the trail it seemed like World’s Greatest gets more than its fair share of bike traffic so I had to see what the other trails were like.

The rider mudhunny met at Vail recommended a trail called the Boneyard located across town from World’s Greatest. After finishing the roughly 8-mile loop with Abrams I was hot but itching to ride some more singletrack. I hopped on the road and headed for the town ice rink where a trail appropriately called Ice Rink would take me to the top of Boneyard. 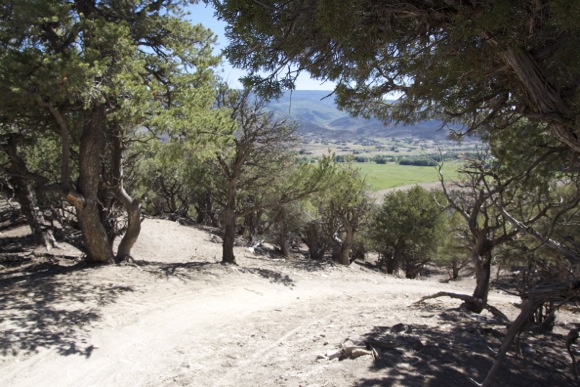 Looking back, less than halfway up Ice Rink.

The first mile or two on Ice Rink was fun with a good amount of climbing flow if you can imagine such a thing. Then, the trail turned steeply upward and I found myself slowly pushing the bike for what seemed like hours (in reality it was probably less than 30 minutes). Toward the top I was a little confused by the various intersections but kept going until I reached the summit. The views were incredible but I was ready to descend the Boneyard! I didn’t see any signs confirming the trail name but based on my map I was pretty sure I had found the right trail. 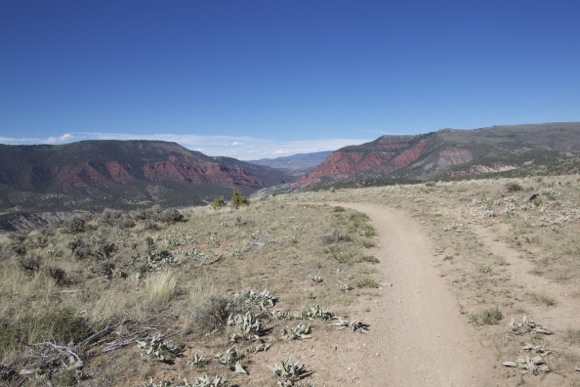 The descent started pretty mellow as it zig-zagged across the open mesa. The trail was smooth and fast through the field, turning slightly rockier as it ducked back under the trees. I was tempted to open things up but the frequent switchbacks and the anticipation of riders (or walkers) ascending kept my speed in check.

From what I’d read, many riders choose to climb Boneyard and descend Ice Rink (or use Boneyard as an out-and-back) which totally made sense because a) the Ice Rink climb is terrible and b) Boneyard seems like a reasonable climb. Still, I enjoy descending trails like Boneyard because they make the downhill last longer.After a few miles the trail spit me out in another neighborhood and I rode back to the car satisfied that I had ridden a trail that was even more fun than the World’s Greatest trail!

I was impressed with the number of great trails in and around Eagle, CO and definitely recommend it to anyone staying in the area. In fact the town recently launched a website, EagleOutside.com, with interactive information on all the local trails that can be a great tool for planning your rides. Besides, where else can you ride the World’s Greatest mountain bike trail?

Thanks for the write up. I dream of taking the time to acclimate to 7K ft and ride some in the upper Colorado basin.

I’ll have to check the trails out sometime, as there is a place in town where I can park my truck. Actually could go over now and get a load, but it wouldn’t pay enough to cover the diesel fuel.

I was concidering parking in the rest area’s down slope and riding the river trail up. It would be Gr8 to say I’d ridden “The Worlds Greatest Trail!!!”

looks like you managed to visit on our dustiest year ever! Sorry you couldn’t see it when the trails are firm and tacky and you can really get some speed going!

Pick up a copy of Mountain Bike Eagle or check out MountainBikeEagle.com. The guide has it all, where to park, where to ride, distance, elevation profiles, difficulty and directions – for when you get to all those intersections and aren’t quite sure where to go. The web site also has trail conditions sections so you’ll know what to expect. Come back after we get some rain for a completely different riding experience!

“perhaps it was named World’s Greatest to direct riders away from the other trails in town.”

Thanks for the write-up, but from the pics it’s hard to see how any of those trails were even close to great. I’m not trying to be a jerk, but I ride in AZ a lot, so I know dust and rock, but I guess I expected more from Colorado? I’ve been riding in and around Vancouver for two weeks now, so maybe I’m just getting spoiled with the greenery up here. just though CO would be nicer!

Haha i loved the line about Deterring the tourists. Good for the locals, bad for local businesses I would think. It does look a little disappointing, but glad you finally got to ride some decent trails!

Thorgron – when looking at the pics, keep in mind this has been our warmest and driest year ever. A statewide fireworks and fire ban have been in effect since early June…..this is definitely not the norm. In the last week we have had 4+ days with rain and it is already a completely different world out there, the dust is down, the moon dust is gone for the time being and the trails are riding perfect. If you want to avoid 30 minute hike-a-bikes and other trail issues, get MOUNTAIN BIKE EAGLE, Eagle’s Ultimate Trail Guide. And to find out about trail conditions before you visit, MOUNTAINBIKEEAGLE.COM!