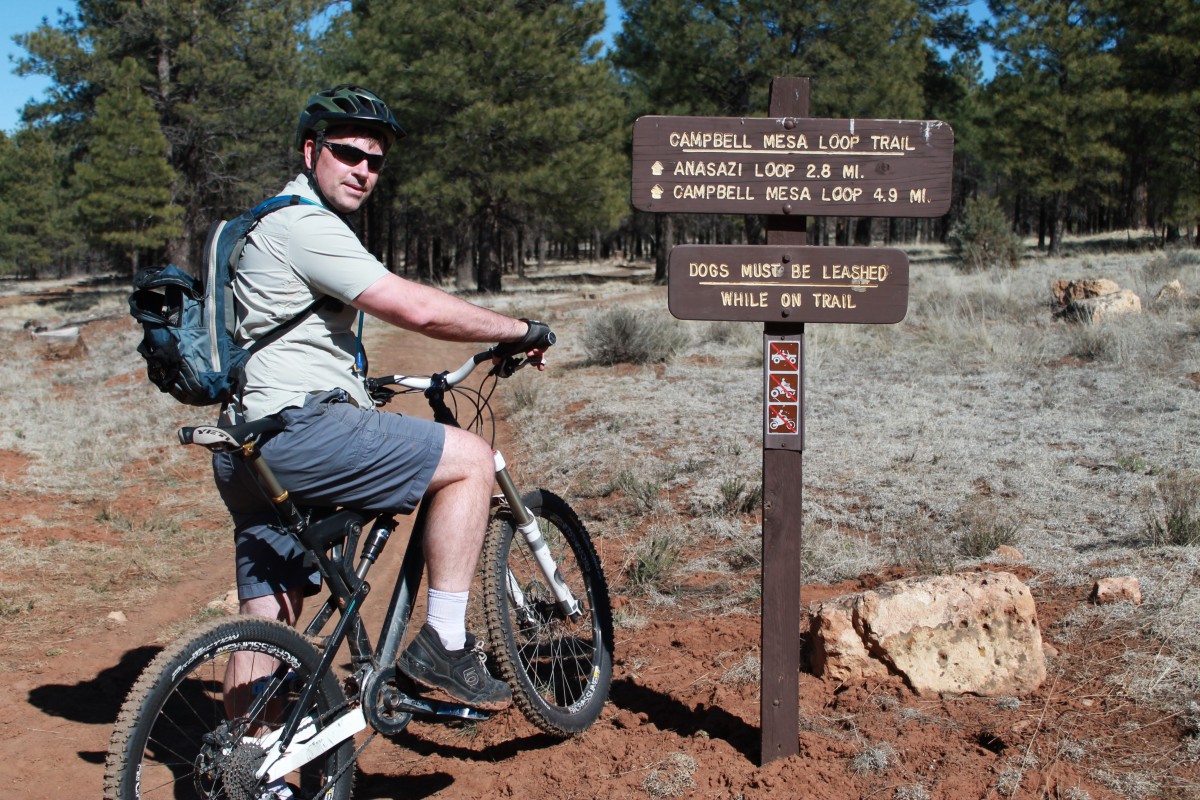 I had been through Flagstaff many times before, but I had never ridden there, despite having heard great things about the mountain biking. But on each previous pass through, I was either time-pressed or it was the wrong time of year as I headed to Sedona, Phoenix, or Tucson–warmer climes where I could feed my singletrack addiction in midwinter. You see, despite being in Arizona, Flagstaff isn’t in the desert but rather in the mountains. Resting at an altitude of 7,000 feet, nearly 1,000 feet higher than my home in Colorado Springs, Flagstaff has something like a real winter each year, with significant snow accumulation. So, to my detriment in wanting to hit dry land in December through February, Flagstaff wasn’t really an option despite being so close to my ultimate destination.

But this year, as I planned a family spring break trip to San Diego, I realized we could sneak Flagstaff into the itinerary. Passing through during the last full week in March would put us right on the cusp of being able to ride some of Flag’s lower-elevation trails. We just had to hope the weather would hold, and we went ahead and put three of Flag’s relatively low lying rides in the schedule: Campbell Mesa, Soldier Trails and the Fort Valley Trail System. 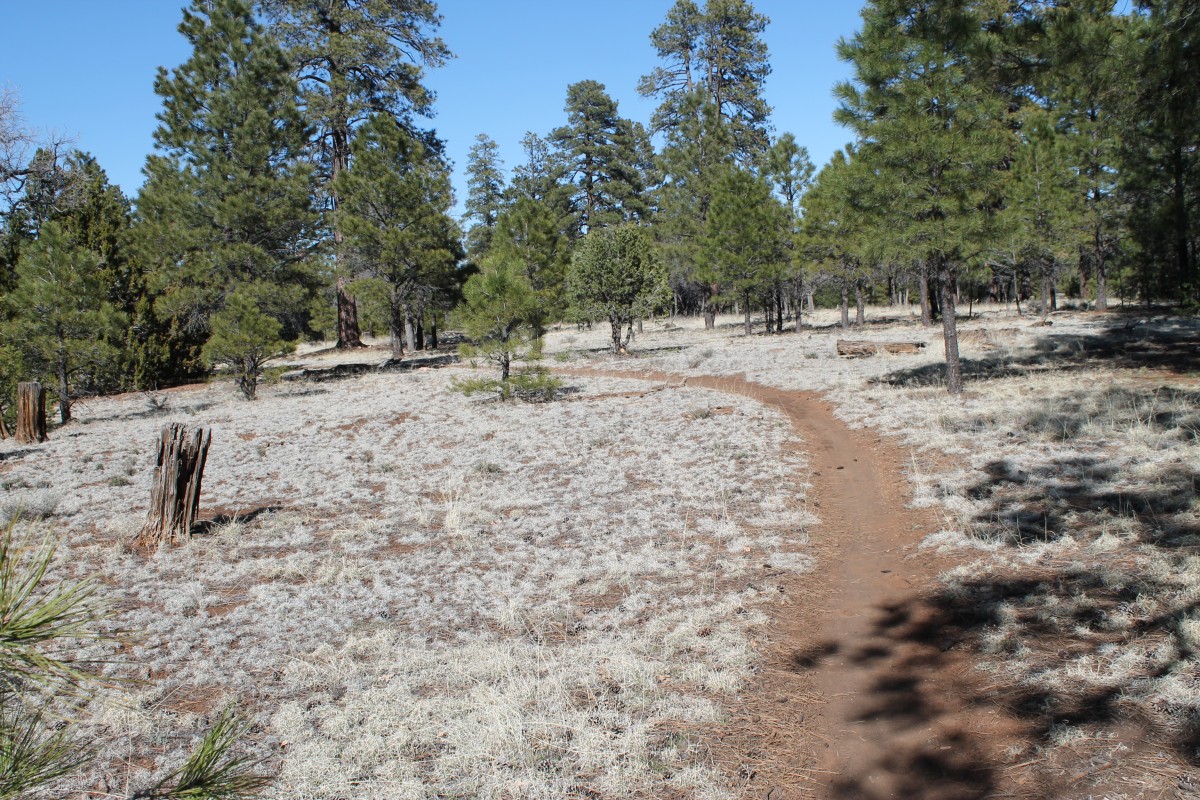 Lying just off the southeast side of town is the Campbell Mesa area, which doesn’t look so much like a mesa as it does just some ponderosa pine-covered rolling hills. The 411 on this trail was that it was novice-friendly or, as my son would put it, “lame.” Knowing the trail was on the easy side, both aerobically and technically, and that Miniskibum probably wasn’t going to dig it much, I came up with a radical proposition. He could wait in the hotel while I took Mrs. Skibum on the ride. My wife, who is decidedly not an extreme sports enthusiast, had a grand total of 9 miles of singletrack experience in the form of one ride around the Intrepid Trail at Dead Horse Point State Park outside Moab, Utah. That had actually gone very well for her–and by proxy for me as well–so I figured we could probably pull this one off as well.

We made our way out to the parking area with our map downloaded here on Singletracks, and high hopes for a pleasant spin. The small parking area was full on a Thursday afternoon, and after squeaking into a slot between a car and the fence, we were off and turning cranks up a short stretch of dirt road before hitting the singletrack. The singletrack varied in width, but as expected, was always easy both aerobically and technically. When there were rocks, they were always manageable by a novice without dismounting, or there was an easy ride around. The ponderosa woods, which were quite reminiscent of my own stomping grounds back in Colorado, were very pleasant. The ride proved to be exactly what I had hoped: a pleasant backdrop for an easy spin through beautiful woods with my wife. Which is not to say that an advanced rider out solo couldn’t have a blast here; I would love to go back and time trial these trails, especially on a fully rigid single speed!

As pleasant as the bulk of the ride was, there was but one small fly in the ointment, coming in this case in the form of Interstate 40. After departing the interstate it’s a short drive south and then a little bit of road heading back east through a residential area to get to the trailhead on the edge of town. The beginning of the ride feels like it is on the edge of civilization, and it is. Then, as you depart the trailhead, you get a more remote feeling, until you follow the trail far enough north to get back within earshot of I-40. Unless you take the spur that crosses I-40 back into town, you will never see it, but for a good chunk of the ride you will hear the constant rumble of interstate traffic. Still, that’s a small price to pay for such gorgeous singletrack so accessible either to local citizens or any ol’ tourist just passing through.

Adjacent to the local fairgrounds on Flag’s southwest side lie the Soldier Trails, another relatively-modest network carved out of the ponderosas. Officially, this is the Fort Tuthill County Park, and the Soldier Trail is the longest trail in the network, circumnavigating the area. Here, the woods are a little thicker, the hills a little longer and steeper, and one trail segment was reputed to actually provide some challenge. So for the Soldier Trails, it was time to trade in the wife for the son and make for the woods. 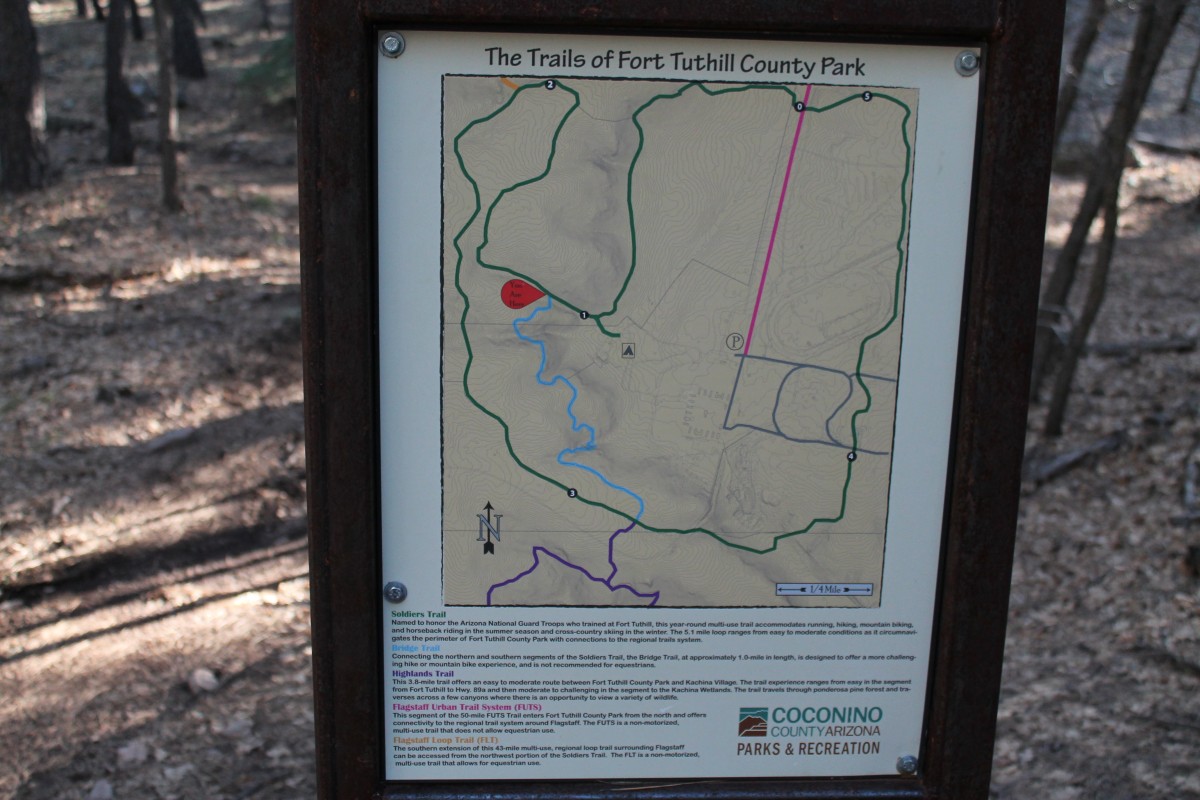 We had to poke around a bit to find our desired entry into the singletrack loops, but once we did, the trail was immediately entertaining. These woods were either much darker than Campbell Mesa due to the thicker forest, or the later time of day was cutting off more light as the sun began to sink–probably a bit of both. To start, the singletrack, while not particularly technical, was definitely an order of magnitude more difficult than Campbell Mesa. While Campbell Mesa was perfect hardpack with occasionally gravelly spots, the Soldier Trails were somewhat softer dirt compounded by occasional roots and pine needles. It wasn’t long before we hit our first climb. It wasn’t miles long like I’m used to on Colorado’s Front Range, but it was steep enough to make its moderate length shoot up my heart rate pretty quick. In these deeper, darker woods, we also found some snowy wet spots, no doubt the result of steeper grades and less sunlight than Campbell Mesa. 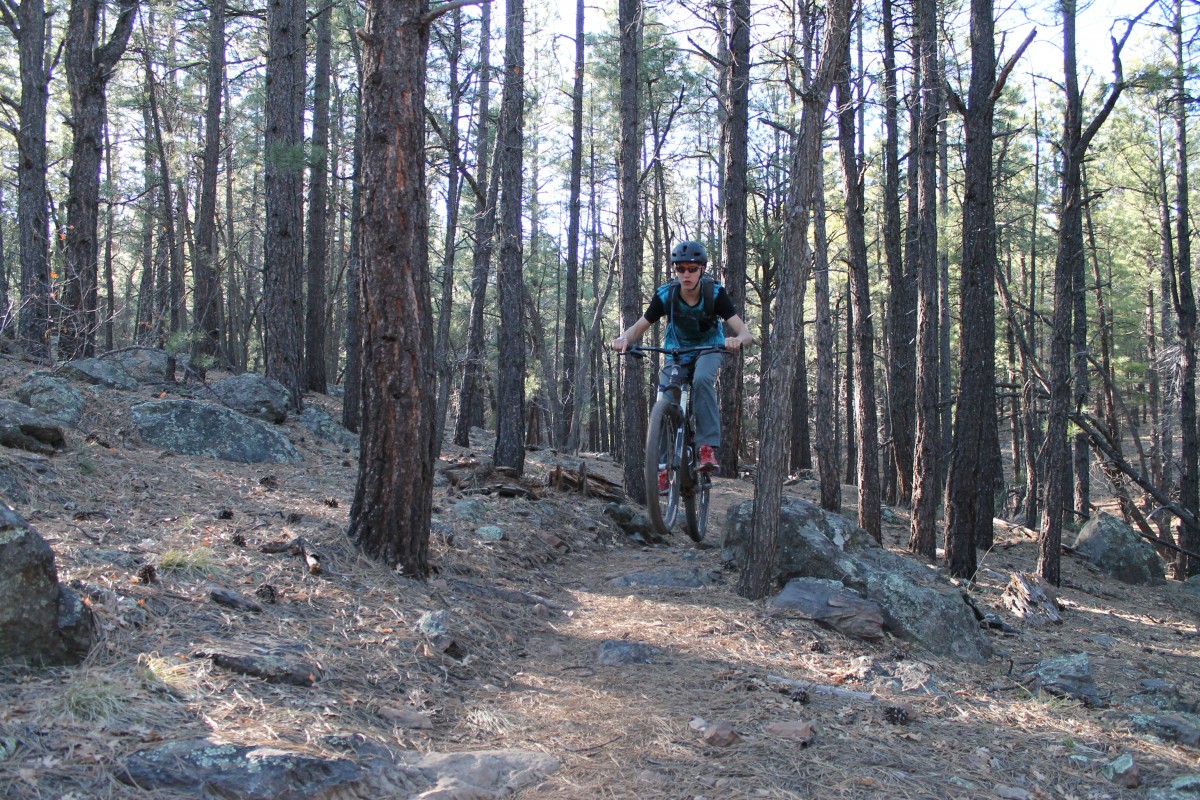 Our real goal here was the Bridge Trail, a one-mile segment which bisects the outer Soldier Loop, and does so with a much greater technical component. For me, this ended up being about as good a one-mile stretch as I could hope for. While the elevation difference from end to end is negligible, there are lots of sharp ups and downs along the way, each one punctuated with mini rock gardens, and some with significant obstacles. It’s definitely not a “flow trail,” but rather challenges the rider to create his own flow among the ever-changing pitch and surface. This short but attention-demanding stretch was a perfect way to punctuate the day before the final descent back to our parking lot (which also took a good deal of poking around to find after we emerged from the woods). 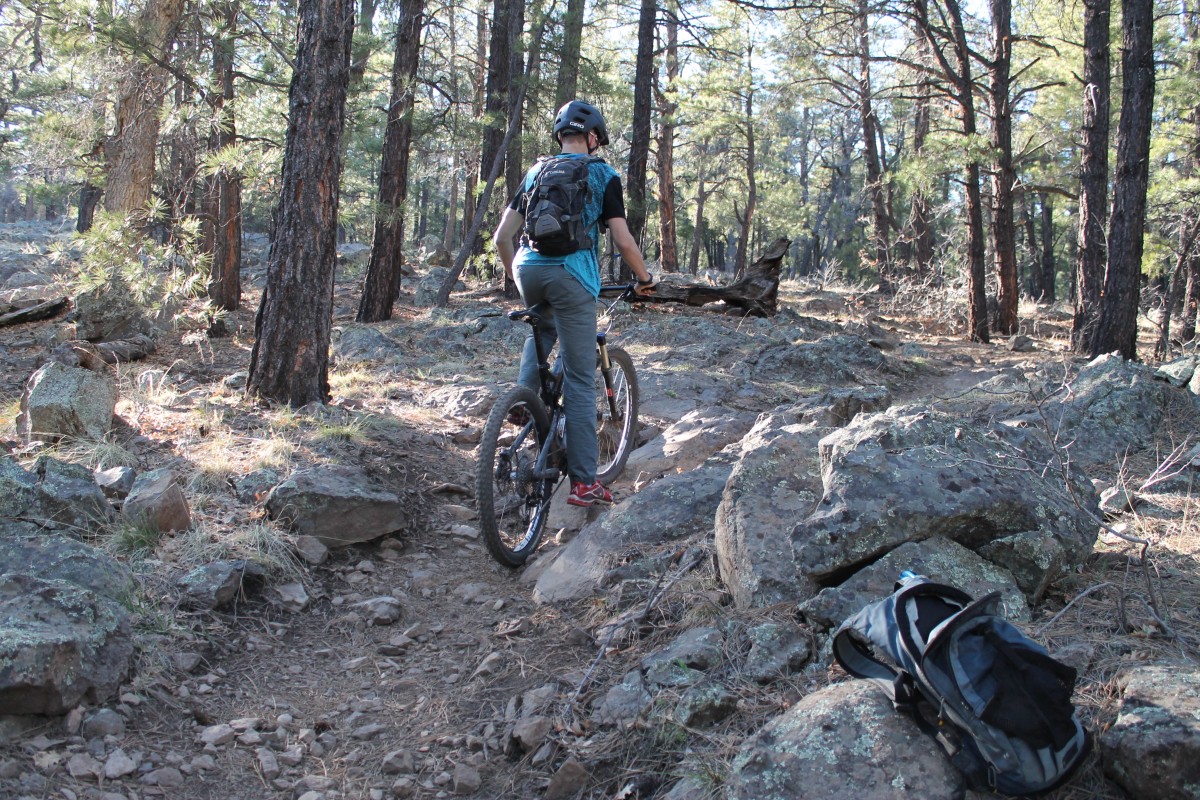 This one was not to be. By the end of our Soldier ride, the shadows were getting quite long. Figuring in drive time to the third ride and the fact that it was likely to be even wetter than the Soldier Trails, we decided the wise thing to do was chuck it and settle for a two-parter rather than a trilogy. While we were disappointed as riders, you, the Singletracks readers, are still fully informed since Greg was able to produce a ride report on the Fort Valley Trail System a couple of years ago.

Flag’s low-lying trails are sweet and well worth a stop. While I hit two of the more accessible trail systems in the area, I still can’t say I’ve really ridden Flag, since I have yet to hit Flag’s centerpiece, Mt. Elden. Pushing the 10K-foot level, Mt Elden doesn’t dry out until summer, so that was never an option on this trip and remains on the wish list. I suspect that taking what I experienced in Flag’s low level trails, cranking up the altitude, and adding some more gnar, would make for unbelievable riding; I now must go back, but in the summer! 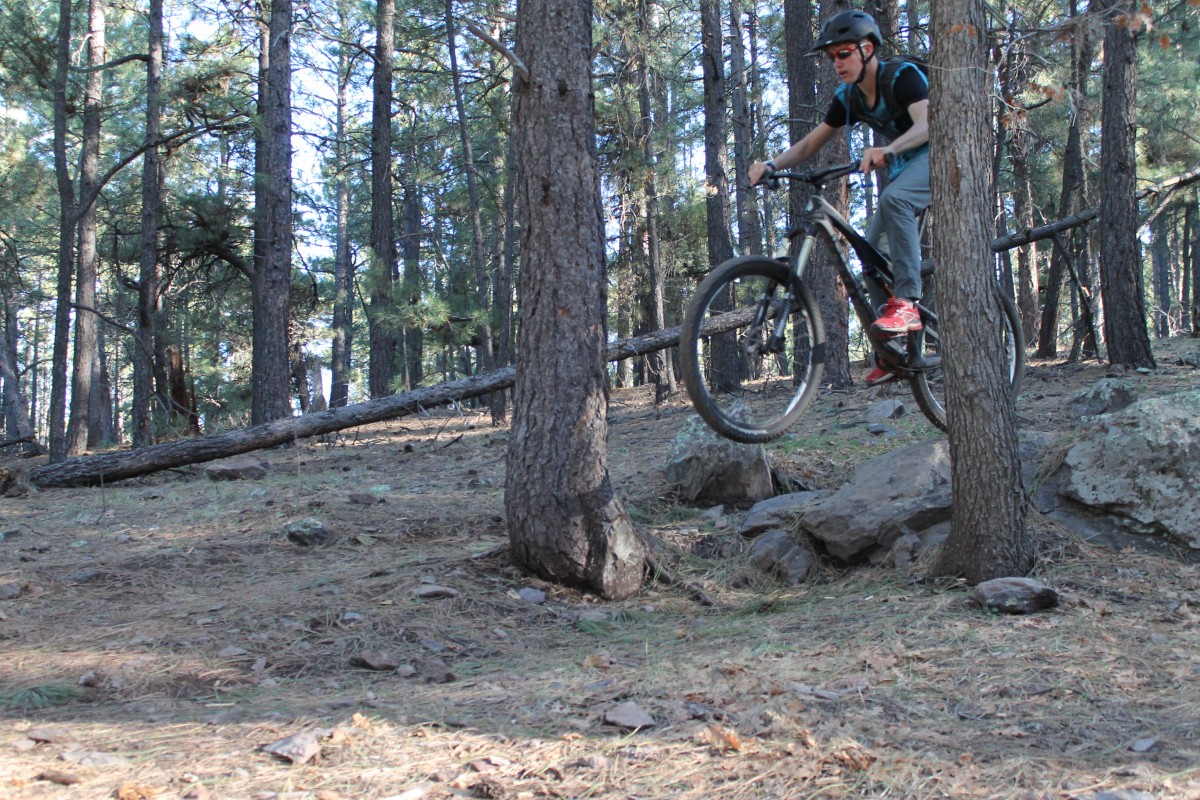 Man, I hate it for you that you didn’t get to ride Fort Valley! Those trails, and the connected portions of the Arizona Trail, are XC heaven! And the rocks on Schultz Creek aren’t insane, but they’re entertaining. Next time you’re back, you NEED to check those spots out!

Thanks for the great write up!