The Morzine and Les Gets area is best-known for their bike park trails and the extreme freeride lines tucked away beneath the towering pine trees that cover the mountainsides. As my guide for the weekend, Jo Pauly of RideAbility, commented, “if you live in Morzine and don’t need a DH bike to ride the trails here, you won’t need a DH bike anywhere!” Despite that sentiment, we both found ourselves riding enduro bikes for the duration of the weekend. Currently Jo’s only bike is a 160mm-travel Turner RFX, despite a long history as a downhill racer, including some very respectable masters results.

Since we both found ourselves riding enduro bikes, we decided to take them out of the bike park, and into the backcountry.

As we rolled away from the top of one of Les Gets’s chairlifts and began pedaling up a gravel road instead of instantly dropping into a DH track, Jo shared some insights into the trail traffic in the region. While Morzine/Les Gets is a mountain biking hotspot, an internationally-renowned destination attracting thousands of riders, “if you pedal for 5 minutes, you’ll have the trails all to yourself,” said Jo.

Indeed, while walking around Morzine, I found that some of the area riders are decidedly anti-pedaling and anti-enduro: 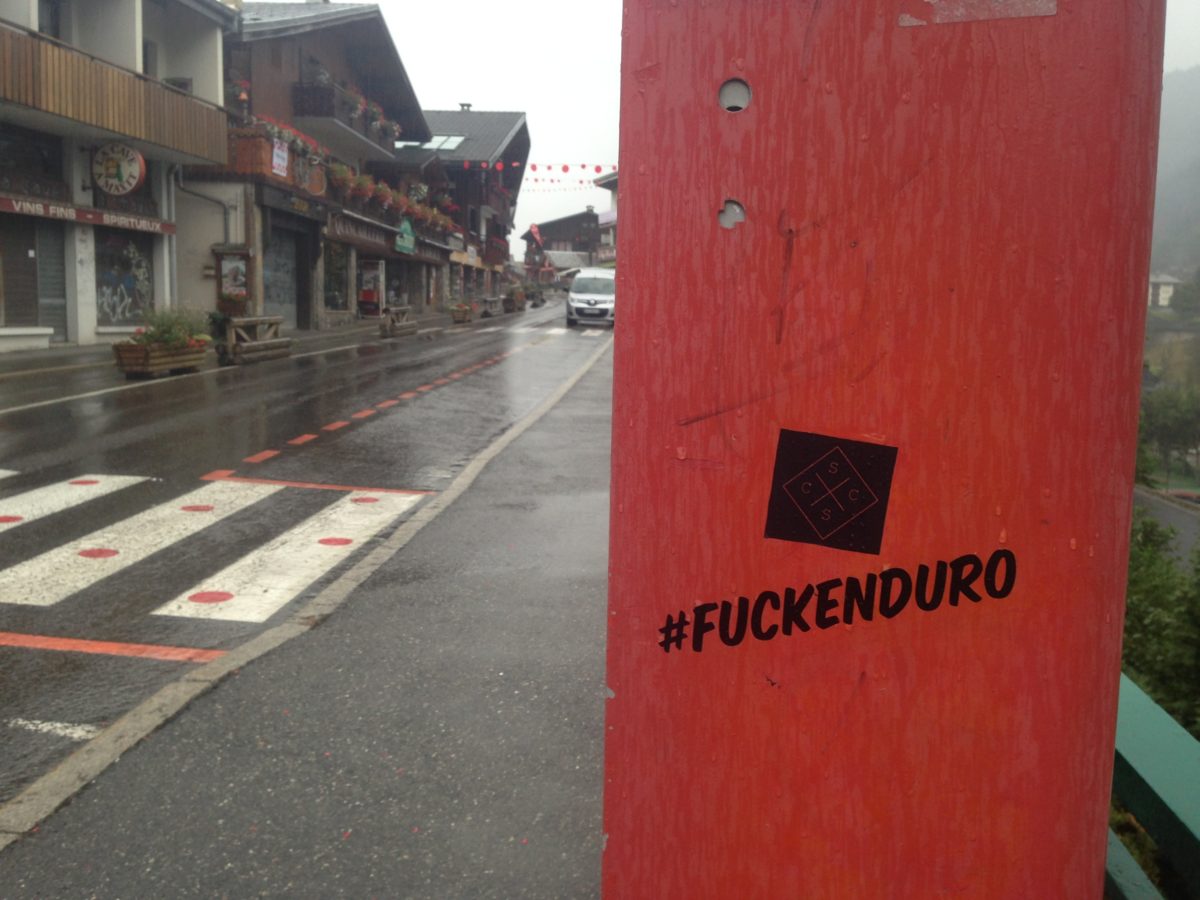 While Enduro with a capital E can keep it’s racing for all I care, classifying my preferred riding style as “enduro” is fairly accurate, so I’ve just learned to embrace it.

As the resort disappeared into the distance, I quickly verified the accuracy of Jo’s statement. Suddenly, away from the lifts, we truly did have the trails to ourselves. In fact, aside from three different groups of hikers, we didn’t see anyone else on the backcountry singletrack over the course of our two days of riding off the beaten path.

During our first day of riding, we still stuck relatively close to the resort, with quick 15-20min pedals opening up a wide variety of terrain. This offered the complete antithesis of the blown-out, heavily-trafficked feeling of the bike park trails, instead delivering up absolute quiet and solitude, deep in the French forests.

If you’re reading this article in an attempt to glean specific trail recommendations in the Morzine area, I’m afraid you’ve come to the wrong place. While I could possibly give you one or two trail names and share a GPS track with you, the reality is that the majority of the trails we rode either weren’t signed at all, were poorly-signed, or even if they were signed, they required a complicated system of turns and route-finding decisions that at times even had Jo, the local expert, second-guessing which turn to take.

While being able to pedal five minutes from the lifts and not see another soul is a beautiful thing, there’s a reason everyone stays in the bike park–it’s easy to navigate thanks to decent signage and a trail map. But when you leave the bike park boundaries, the signs and the maps–at least, the one that I saw–are of basically zero value. If you really want to explore this zone, I highly recommend hiring Jo as your guide… otherwise you’ll be doing a heck of a lot of wandering around aimlessly.

If you do locate the goods closer to the resorts, you’ll find narrow, steep, loamy singletrack snaking between the trunks of the massive pine trees, with webs of roots lining the trails. Steep switchbacks, fast straightaways, and all manner of challenging terrain is hidden out of sight in the deep forests.

Pedaling Way Out of Bounds 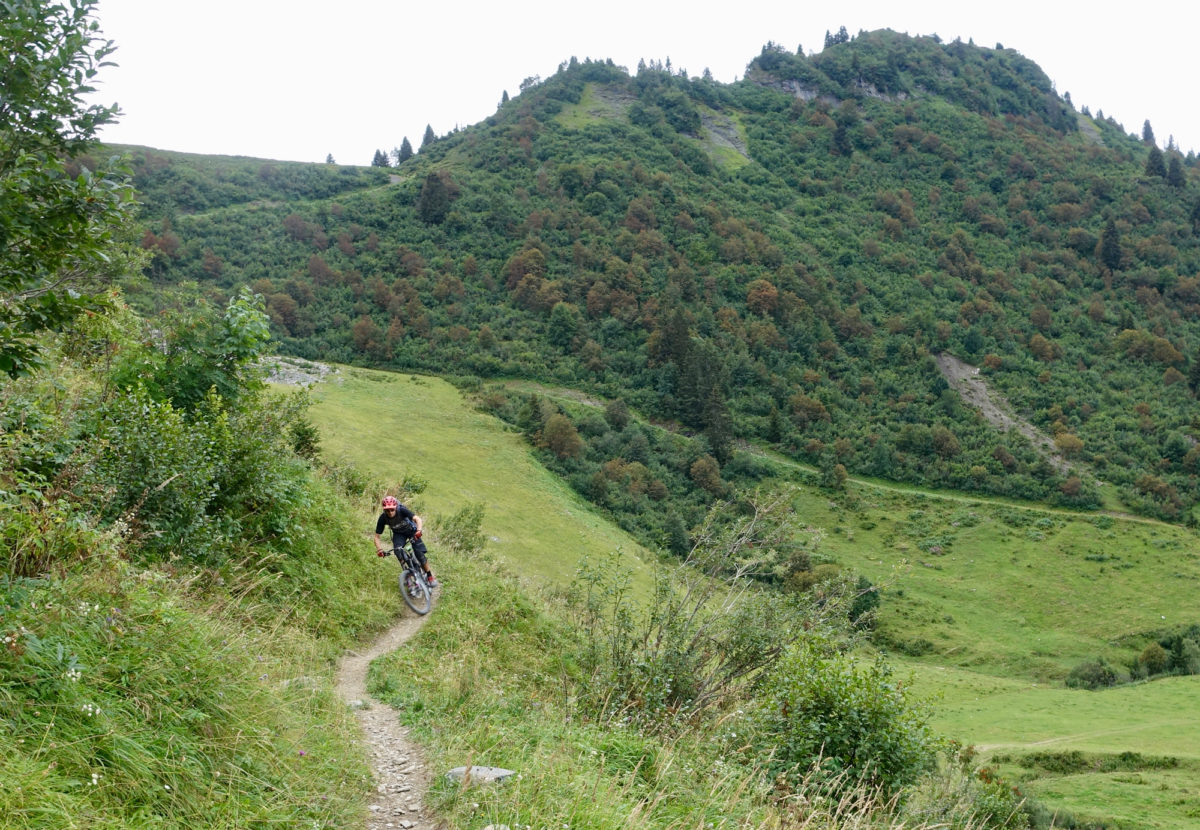 On our second day of riding we decided to up the ante. After our standard three-lift combination to get to the top of Les Gets, we embarked on a 45-minute pedal out the back the resort, on a narrow paved road that earlier this year served as the conclusion to a Tour de France stage, ending in Morzine. As I ground up some of the steep climbs with my low-geared drivetrain, I imagined myself with steep road bike gearing, a pack of hundreds of racers, and cheering fans. Or I should say, I tried to imagine myself in that situation, and failed horribly–I guess I’ll just settle for spinning in my granny gear in my baggy mountain bike clothes.

We left the pavement near a lake in the Nyon area, heading out on the singletrack to loop around the back bowls of the ski area, eventually dropping into Morzine. In addition to generally feeling like we were in the absolute middle of nowhere, I had no idea where we were going, so I just clung to Jo’s wheel as we took seemingly-random turns, which eventually delivered us to the singletrack goods.

While the trails the previous day had been highly-entertaining and truly stellar, finally I felt like we were pedaling a true representation of classic backcountry Alps singletrack! The narrow track curled around a steep mountainside, with sharp exposure and a long tumble down if you missed a corner.

As we pedaled on, the trail only got narrower and narrower, until we finally reached a section of singletrack with stunning beauty, but absurd exposure! This section featured a cable attached to the wall of the mountain, for hikers to hold onto so they wouldn’t fall off.

And we were attempting to ride it!

While much of the trail was indeed rideable with some care, a couple of sections forced us to shoulder our bikes on the downhill side, hang onto the cable on the uphill side, and gingerly descend rocky staircases with sheer cliff dropoffs below. I should have snagged a photo of this section, but I was a bit preoccupied trying not to die.

The best hike-a-bikes reward you with sweet singletrack on the other side, and the hairy middle section of this trail delivered us to continued singletrack bliss. After departing the seriously exposed portion of trail, we passed an alpine hut high above Morzine, climbed up over a pass, and dropped down into a forested valley on the backside. While we were approaching the end of our route and would soon be returning to Morzine, this deep, dark valley was a new zone that we hadn’t yet explored, tucked around the corner of a mountain, just out of sight from town. After crossing a dirt road, we dropped into a network of trails, with some steep, benchcut sidehill tracks, and descents peeling off every mile or so, dropping straight to the valley floor below. 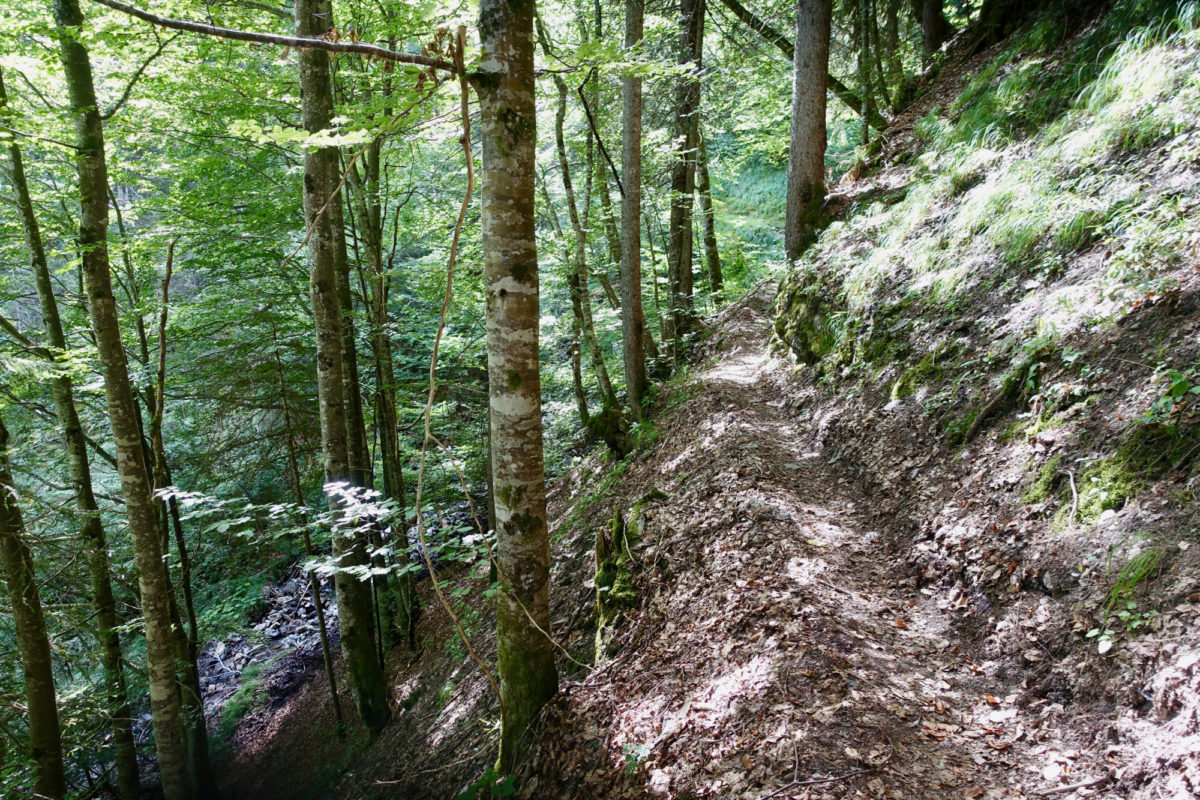 One portion of our descent featured a near-endless array of back-to-back-to-back switchbacks–the only way to descend a mountainside this steep and this sustained! While I wished we had a bit faster, more rewarding way down that portion of the mountain, the challenge of hanging on and making each corner was undeniable.

Eventually we did find a bit rowdier, faster descent, but before I knew it, we were back at the river bottom, pedaling along an easy path back into Morzine. As with most backcountry rides in the Alps, it was incredible how quickly we went from the middle of nowhere to back in town, ready for lunch. While our ride was challenging, draining, and seriously-entertaining, rolling back into Morzine ready for some food as a reward was the perfect conclusion to our morning of adventure.

My steed for our adventures, both inside and outside of the bike park, was a 2016 Santa Cruz Bronson C model. Having tested the CC version in California last fall, I was pretty familiar with the model, and was able to request a few personal component changes before I even arrived.

The FB Freeride bike shop served as an official Santa Cruz demo center for 2016, offering the entire range of Santa Cruz’s line for rental and testing. Santa Cruz held some dealer and media events in Morzine earlier this summer, and after they departed they left their entire range here with FB Freeride. 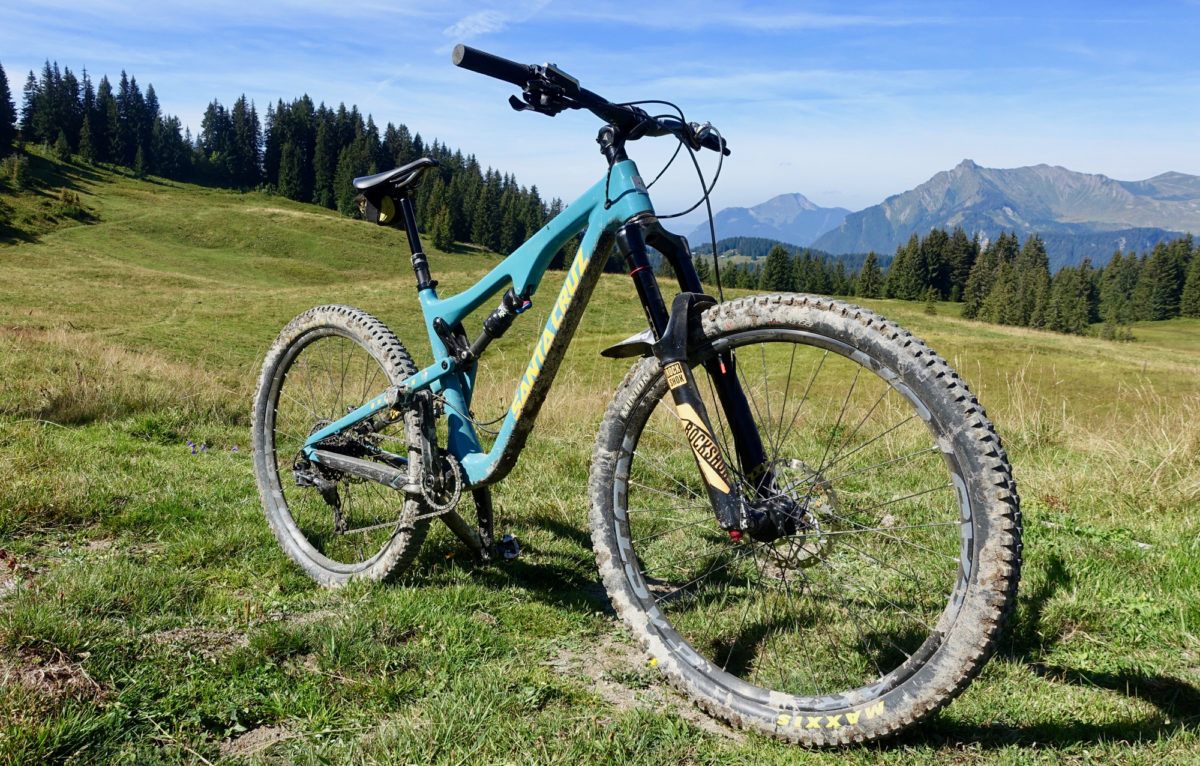 Santa Cruz’s partnership with FB Freeride makes a ton of practical sense, because they are the bike rental shop to visit in Morzine. While you can find plenty of places to rent a mountain bike, FB Freeride is one of the largest shops, with the best selection, and easily the best location–they are located right at the bottom of the Pleney lift. Mountain bike central!

The folks at FB Freeride were more than accommodating with my personal preferences, and had plenty of parts in stock when I needed them, like a new pair of shorts after my test pair blew apart at the seams.

Pro Tip: if you’re coming from the States, unless you run your brakes moto style on your personal bikes, be sure to specify that you want your brakes set up standard and not moto. While the French generally run their rear brake on the right side, apparently the British generally run their brakes moto style, with the rear brake on the left side. So, whenever they find out that an English-speaking person is renting a bike, they automatically switch the brakes to moto style before you even show up.

I learned this the hard way.

After hitting the ground hard a few times, I figured out what wasn’t right with my setup, got the brakes switched back to normal, and we were good to go!

If you’re looking for a place to rent a bike in Morzine, you can’t beat the lineup and the convenience of FB Freeride. 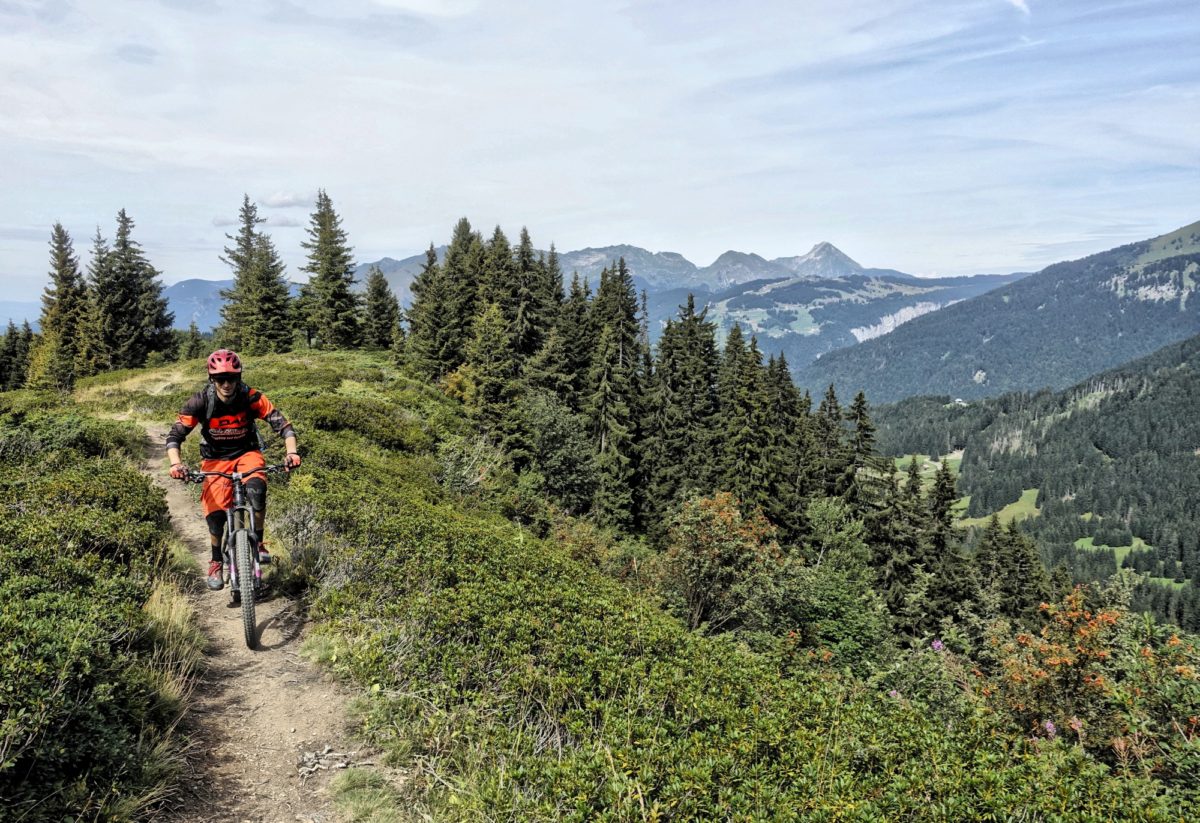 Morzine/Les Gets objectively ranks as a world-class destination for downhillers and freeriders. The entire region is designed to be ridden on a bike with a dual crown fork, with chairlifts and gondolas every which way, super gnarly DH and freeride trails, and jump-filled flow lines. If this is the type of riding you love to do, you will be in gravity-fueled heaven in Morzine!

But if you prefer to get away from the crowds and out into the mountains, never fear–Morzine has those trails too. Despite what some vulgar stickers on lamp posts might indicate, this zone is the perfect spot to take your trail bike, grab some free vert on the lift, and then pedal off into the rugged mountains in pursuit of backcountry adventure!

Thanks to Reach4thealps, FB Freeride, and RideAbility for making this trip possible!