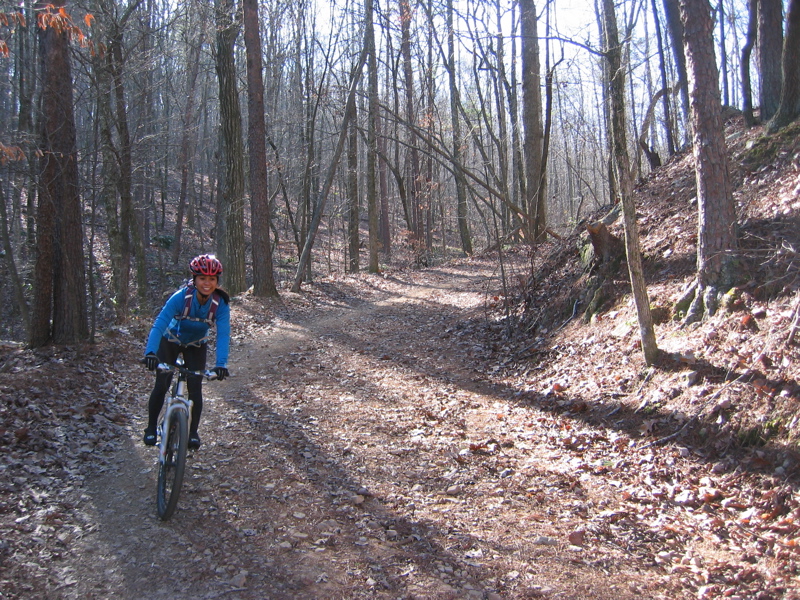 Yesterday mudhunny and I continued our New Year’s Day tradition of going on a mountain bike ride to start the new year and this year we chose Oak Mountain State Park in Birmingham for our adventure. We had hoped for an early start but sometimes that’s tough after New Year’s Eve celebrations we eventually hit the road around 8:30am. The GPS in the car estimated our arrival at just after 10am which seemed like a short trip until we realized we’d be gaining an hour after crossing into the Central time zone. Sure enough we arrived about 2 and half hours later and paid our $3 per person admission to the park.

Oak Mountain State Park is one of, if not the largest, state parks in Alabama. We were aiming for the North trailhead but seeing no signs we proceeded to the park office to look for a map or some directions. Unfortunately the park office was closed but from the map outside the office it looked like we were close to the South trailhead (which was also unmarked as far as we could tell when we got there). Luckily we downloaded a GPS map from singletracks the night before (submitted just that day by singletracks member Texinal!) that pointed us to the trail. 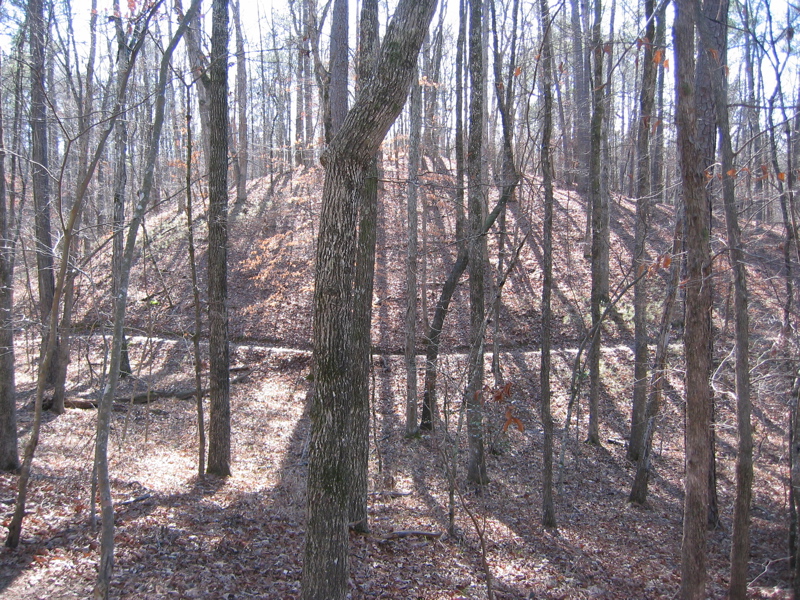 The weather yesterday was pretty chilly to start but the sun was out, the trail was dry, and we were stoked to get some time in the saddle. We scarfed down peanut butter and jelly sandwiches in the car before heading out on the 16 mile loop but neglected to bring any snacks for the ride itself (much to mudhunny’s disappointment toward the end).

The climb up Oak Mountain was fairly gradual and we really enjoyed the section called “Mr. Toad’s” with its sweeping turns and smooth tread. Closer to the top of the climb we found ourselves on a rocky, former road bed with incredible winter views to the west. Once we crested the ridge we started seeing more riders and realized we were probably heading the wrong way around the loop apparently most mountain bikers prefer to do the loop clockwise (good to know for next time). 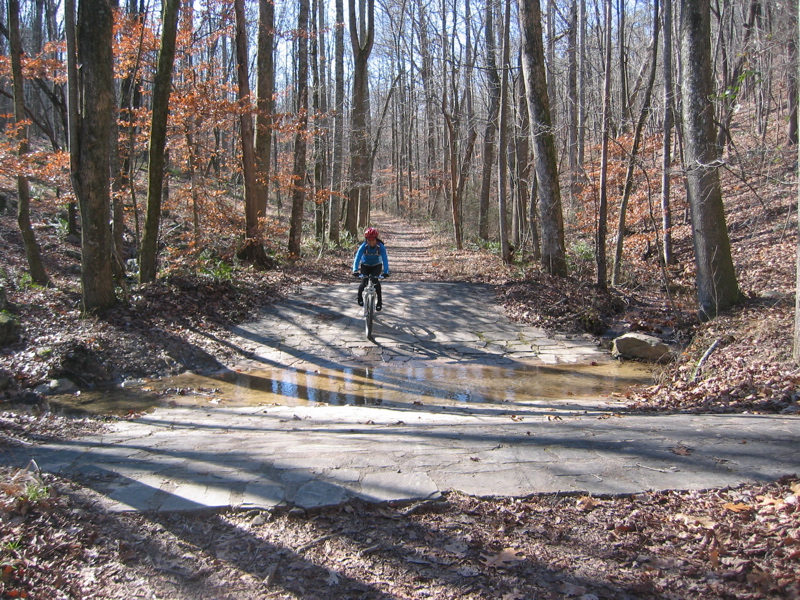 The descent was short and fast and followed another roadbed beside a small stream. I counted at least 8 stream crossings on the way down but fortunately the water wasn’t very deep so we kept our feet dry for the most part. At the bottom of the descent we pedaled past the North trailhead and continued on some of the best singletrack of the ride back to the car. At one point the trail was so narrow with small pine trees on each side we had a really hard time letting the clockwise riders pass. Finally the singletrack dumped us out at the paved road where we pedaled back about a mile to the car. I felt like we must have missed a turn or something but apparently the singletrack doesn’t connect all the way around (please correct me if I’m wrong).

We really enjoyed Oak Mountain and especially enjoyed seeing all the different types of riders out yesterday. There were plenty of old-school yellow wind shells being worn and one guy I saw was riding a mountain bike that should have been in a museum but he was still having a great time! Everyone was so courteous and friendly even though we were riding the wrong direction must be that Alabama southern charm.

After the ride we grabbed a late lunch at Jim N’ Nick’s, a local BBQ joint nearby. Then it was time to head back to Atlanta where we’d lose the hour we had so quickly gained on our drive to Birmingham that morning. Another great New Year’s Day ride, I can’t wait to see what new trails 2009 holds for the singletracks crew!

Community
Riding all the Bikes With Vincent Tupin [Video]
Culture
News: Montana Enduro Series Announces 2015 Tour Stops
Progression
News: MTB Clinics for Women (The Stronger Gender) with VIDA...
Gear
The Home Bike Mechanic is All of Us: An Account...

that sounds awesome. it’s great that you and mudhunny have riding in common. is that a 29er that mudhunny is riding? i’m on the fence (fantasizing about the specialized FSR expert 29er a nearby shop has), and wondering how she likes it.
also, i love your site, but for gps data, i have to say that garmin’s motionbased is tough to beat. you would not have made the mistake of going around the loop the wrong way if you used the garmin site and used the “player” function, which actually shows you an animation of the ride you’re looking at from the rider who posted it.
anyway, happy new year and looking forward to getting some southern riding in someday (only been west and northeast so far).

That’s no 29er, just a really small bike – an extra small Santa Cruz Blur to be exact. I guess 26″ tires look huge on that frame 😉

The reason we ended up going counterclockwise was because the track we used was itself created counterclockwise. We were testing a fancy new GPS from DeLorme (review forthcoming) that routed us along the track as recorded, hence the against-the-flow ride. Fortunately the trail is open for riding both directions, just seems like more people ride clockwise than counterclockwise (though I think I prefer the way we went).

I enjoyed reading about your new year’s ride.

We are pretty proud of our trails at Oak Mountain trails. You’re right most riders do take it clockwise but it’s like a totally different trail from the other direction. That means the next time you ride it’ll be like a brand new trail. We’re looking to expand the trail so there will be a total of 25 miles of track. This also means that there won’t be a 1 mile gap from one end to the other.

I was in our annual MTB race, Bump N Grind a couple of weeks ago and I was amazed at how courteous the racers were. Instead of people yelling, “Get out of my D… way.” it was more like, “Hey buddy at the next clearing let me slide by.”

The next time you’re heading to Oak Mountain put a post at BUMP.org (Birmingham Urban Mountain Pedalers) and you may find yourself part of a great group ride.