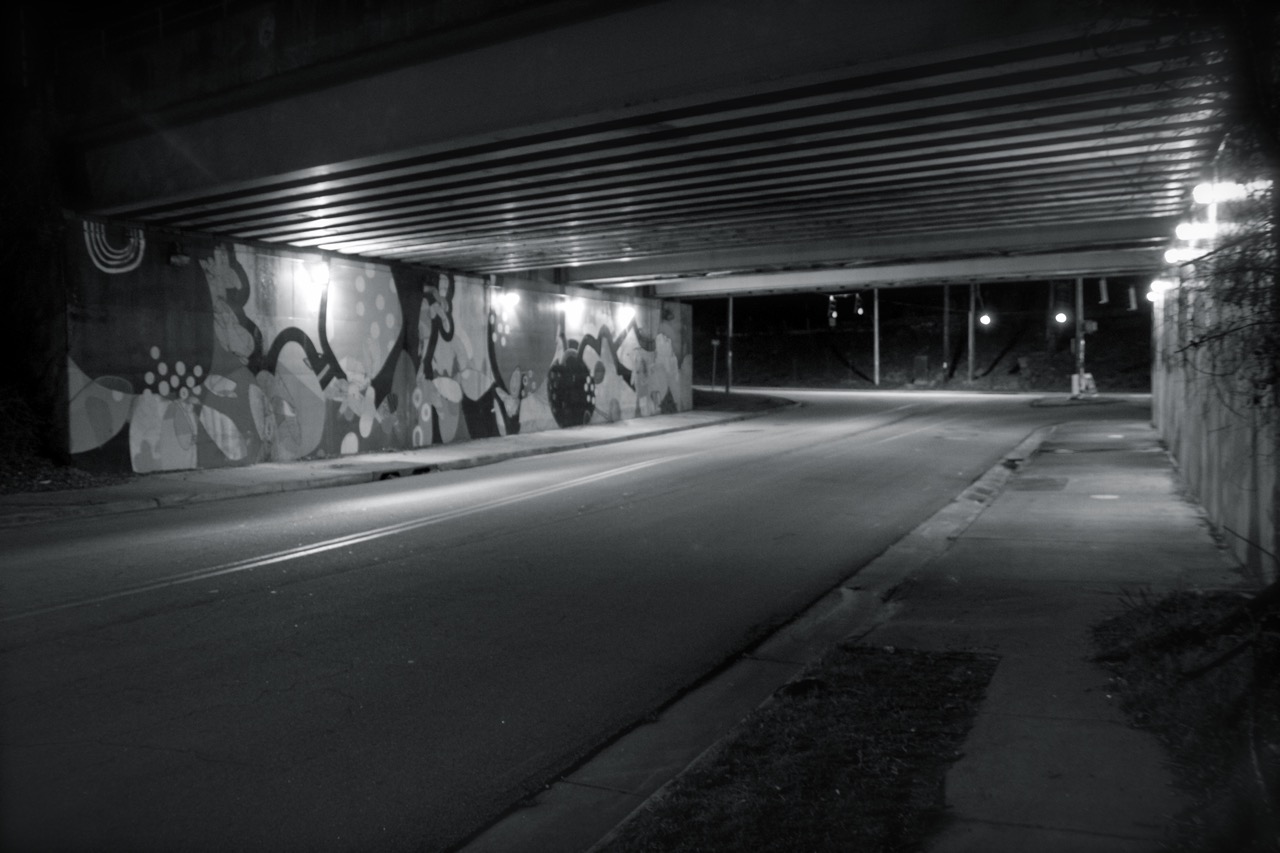 Every Tuesday night, a group of mountain bikers meet up for one of the most dangerous rides in America. The trails can be technical for sure–just think broken glass, exposed rebar, and fallen trees–but that’s not what makes this ride dangerous. Instead, the Tuesday night Faster Mustache ride in Atlanta has become a bullet-riddled tour of some of the east side’s most dangerous neighborhoods.

According to the Bureau of Justice Statistics, aggravated assault rates are higher in the summertime than any other time of year. After four years of regular Tuesday night mountain bike rides in the city, I can say there’s definitely a noticeable uptick in shady groups walking the streets at night during the summer (and also kids doing drugs and having sex in the woods–but that’s another story.)  On one particular muggy, summer night, I witnessed an armed robbery with shots fired.

We finished our ride around 11pm that night and after filling up on pizza and beer at Fellini’s, I said goodbye to the group and slow pedaled up Clifton road alone around midnight. As I turned left onto Dekalb Avenue and made the quick right onto Arizona Avenue, I noticed a small crew filming a movie under the railroad bridge. Seeing productions like this isn’t unusual in Atlanta–in fact, I was just steps away from an abandoned warehouse where scenes from the second Hunger Games movie were filmed. But this was a much lower-budget production–the lack of massive light rigs and generators clearly showed this was an amateur project. Still, I fixed my eyes on the scene as I coasted by. 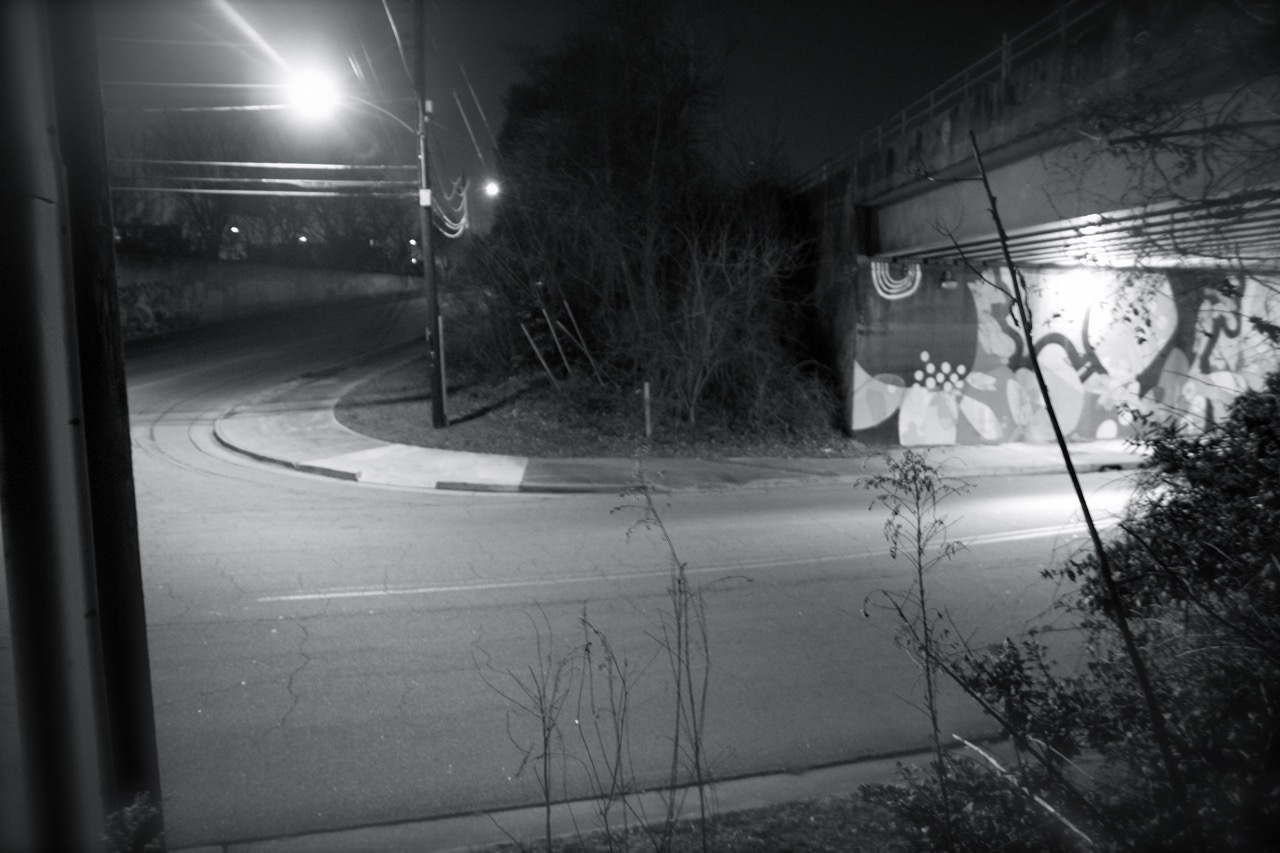 Just as I emerged from underneath the bridge, I noticed two girls sitting on the curb across the street from the film crew, no doubt interested like me in what the movie might be about. Out of the corner of my eye I noticed two young guys walking on a darkened LaFrance street behind the girls, which didn’t seem all that unusual.

Less than 50 yards later, as I made the left turn onto Rogers street I heard two loud pops–gunfire. I slowed down to look back and noticed a car quickly backing up in my direction. The driver and I looked at each other–was that real? I said there was a group filming under the bridge and that maybe the gunfire was fake. The driver exited his car and we both hesitantly walked ahead to peek around the corner.

As we got closer, one of the members of the film crew quickly jogged toward us and assured us the gunfire was real–the two girls across the street had just been robbed of their purses. Apparently the two young guys approached the girls from behind, fired two shots in the air, and ran back down LaFrance with the loot. The driver called Atlanta PD on his cell phone and I stood there for a couple minutes, shaken and not really sure what to do. Did I need to make a witness statement? Should I just get the heck out of there? Seeing as I wasn’t an eye witness to the crime I decided to go home and try to get to sleep.

Less than 6 months later, an Army Reservist would be shot and killed on the very bike path I used to get home that night, and less than a quarter mile from the robbery I witnessed. His group was walking on the path the night after Christmas at around 9pm, roughly the same time our group meets to ride on Tuesdays. Needless to say, I don’t ride the Pullman Bike path alone at night anymore. 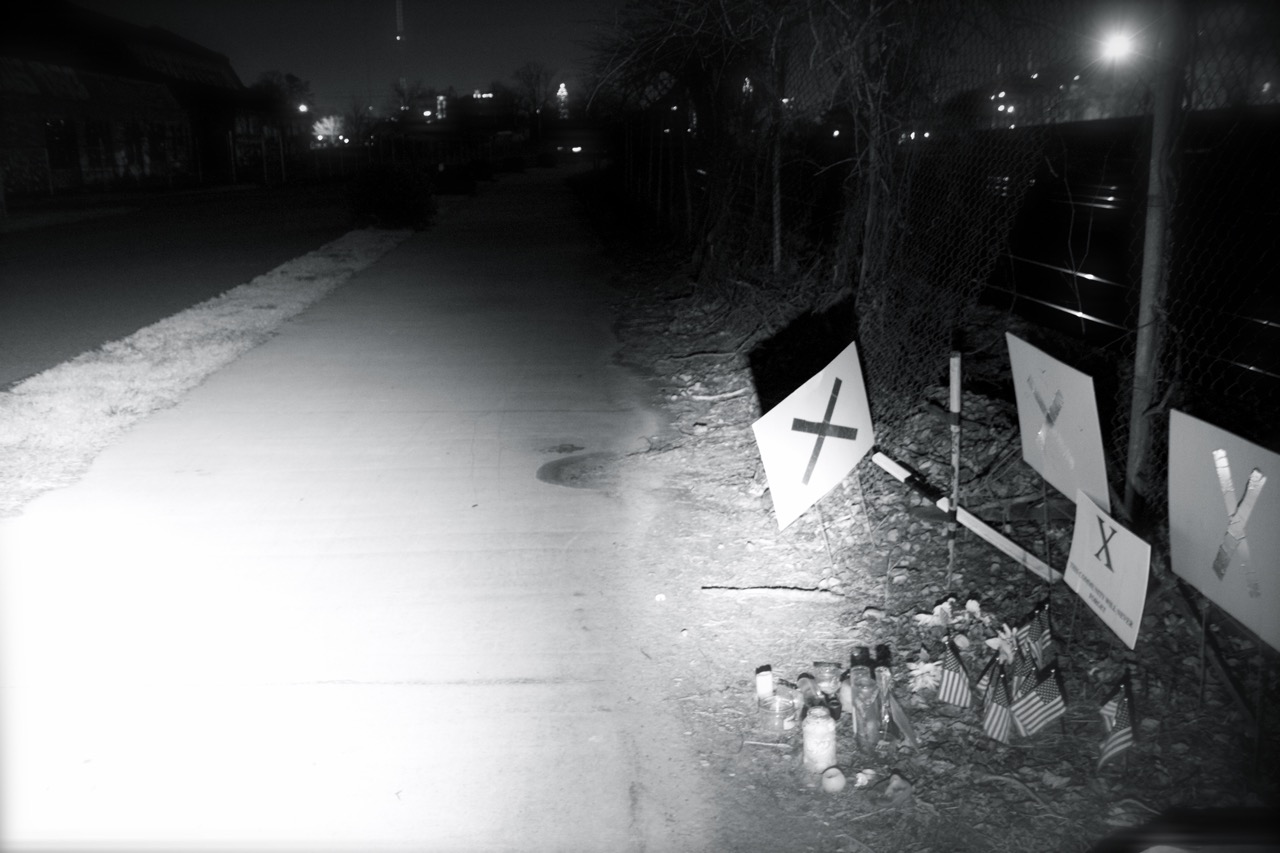 Tuesday, April 29, 2014 was the day after the last day of classes at Emory University. I honestly don’t remember what the weather was that day but it must’ve been cold or wet, because only three of us showed up for the ride. As we approached the north entrance to the Peavine Creek trail, we noticed a white sedan parked on the side of the darkened road, blocking the unofficial cut-through trail leading to Briarcliff Road. The driver-side door was open, and there appeared to be two people standing uncomfortably close to one another behind the door. The whole thing seemed odd, but I told myself perhaps it was just two coeds locked in amorous embrace. It looked like our bright bike lights spooked the two, so we quickly and quietly ducked into the trail on the opposite side of the road. 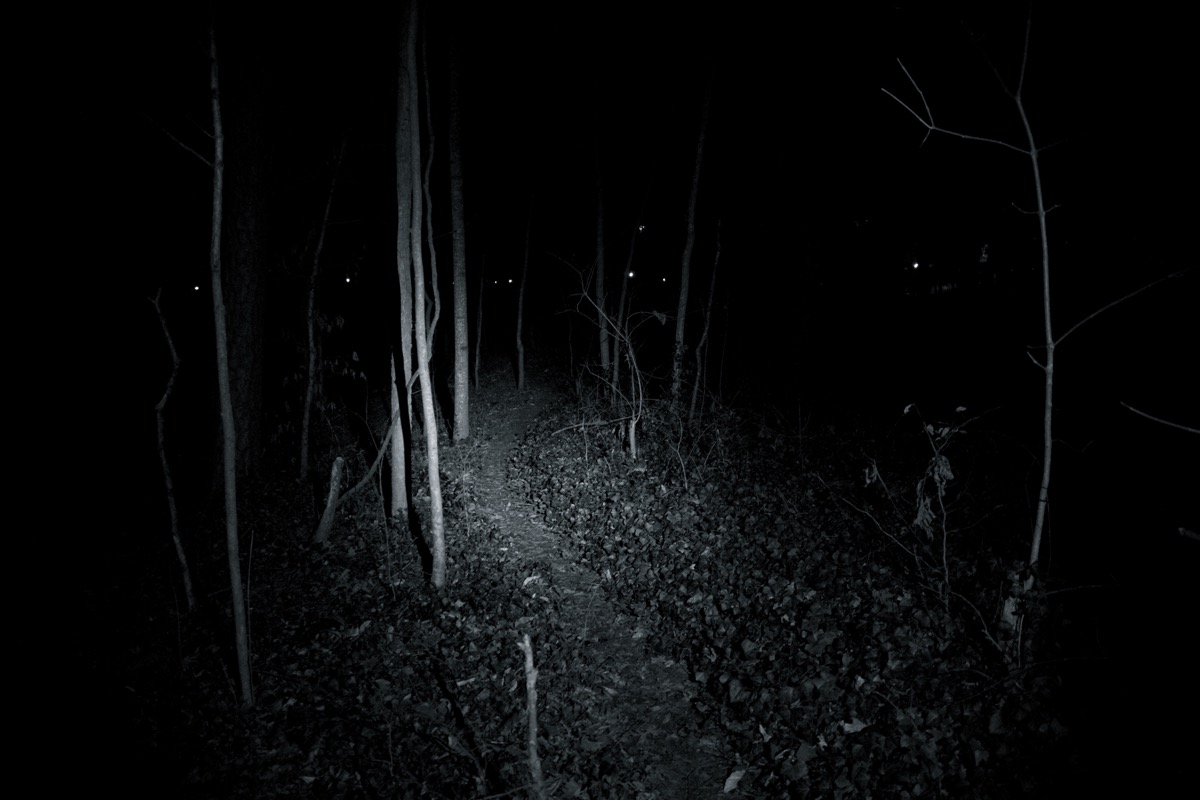 Within a minute or so we all stopped dead in our tracks as five loud gunshots pealed through the still woods. Compared to other gunshots I’ve heard in the city (including the ones at Arizona Ave.) these sounded like they came from a freakin’ hand cannon. The shots were fired in rapid succession, execution style. My heart was in my throat and before I could speak, I heard the squeal of tires and the straining of a car engine gunning to max RPMs. We threw our bikes down and ran across a grassy opening toward the road to see the white sedan, inside lights on, flying up the street. WTF.

I had a sick feeling in my stomach and frankly I was very scared. Even though I wasn’t by myself this time, this shooting just seemed much colder–not something that a couple of dumb, bored kids might try to pull off, but a brutal murder for who knows what reason.

Helmet lights turned off, the three of us inched out of the woods and onto the edge of the road, straining to look back toward the scene of the crime. It was too dark to see much. Joe suggested we ride down to see what happened but that was the last thing on my mind. I wasn’t really afraid of being in danger at that point, just afraid of what we might find. But Mike agreed that we should investigate–and maybe help–so we grabbed our bikes and carefully rolled down the street with our lights still turned off.

There were clear marks on the pavement where the car had just peeled out but little else. Thankfully there was no body and no blood. We hung around for a minute or two, speculating about what had just happened but came up with few answers. We thought for sure we would read something about this in the news the next day. But the news never came.

Weeks later, our best explanation was that we witnessed a drug deal gone bad. Perhaps our lights spooked one or both of the parties–we’ll never know. But I have to hand it to the guys, this is the perfect spot to get your deals done. It’s a back street with little traffic, minimal lighting, and best of all, no houses or businesses facing the street. And the cut-through trail leading to Briarcliff makes for a stealthy getaway to a waiting vehicle at the apartment complex on the other side.

Please don’t mistake this for a story about how dangerous Atlanta is or how riding at night is a risky proposition. Heck, a mountain biker died on a suburban flow trail in Atlanta on New Year’s Day last year after what appeared to be a minor spill. Every mountain bike ride we take involves risk, and it’s up to us to take precautions, whether that means donning helmet and pads or just avoiding sketchy neighborhoods during the summer and National forests during hunting season. At least, that’s what I tell myself every Tuesday night. 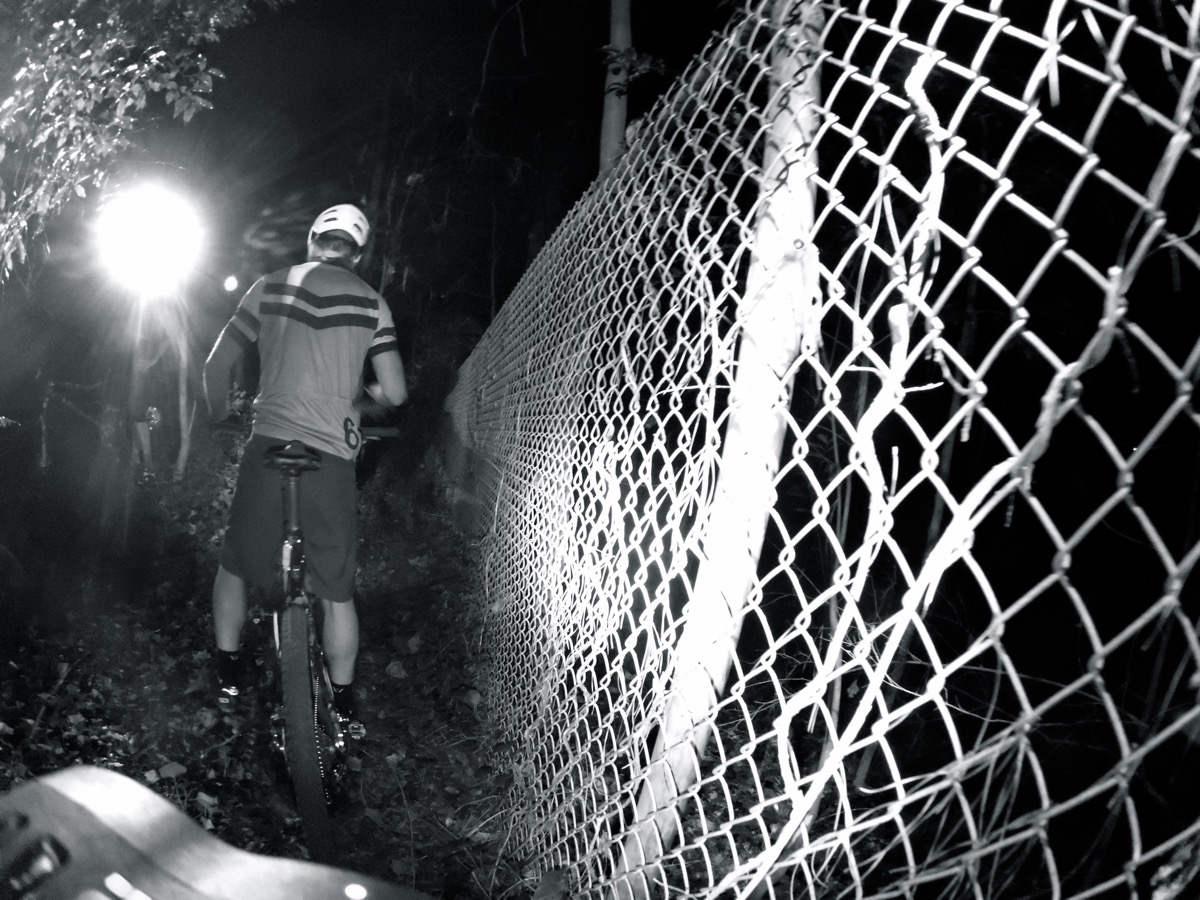 Atlanta is a big city and has its share of problems, but I like to think that our group ride is actually making this a better place, albeit in an indirect way. I truly believe shining bright lights on some of the city’s darkest corners both figuratively and literally can make a difference. Perhaps drug dealers and prostitutes will consider moving their business out of city parks after seeing half a dozen bright lights, seemingly coming out of nowhere, speeding toward them at night. Maybe neighbors will notice us outside after dark and will feel a little safer about being outside themselves. And seeing the homeless bedded down on some of the coldest nights of the year gives me awareness which motivates me to do what I can to help. 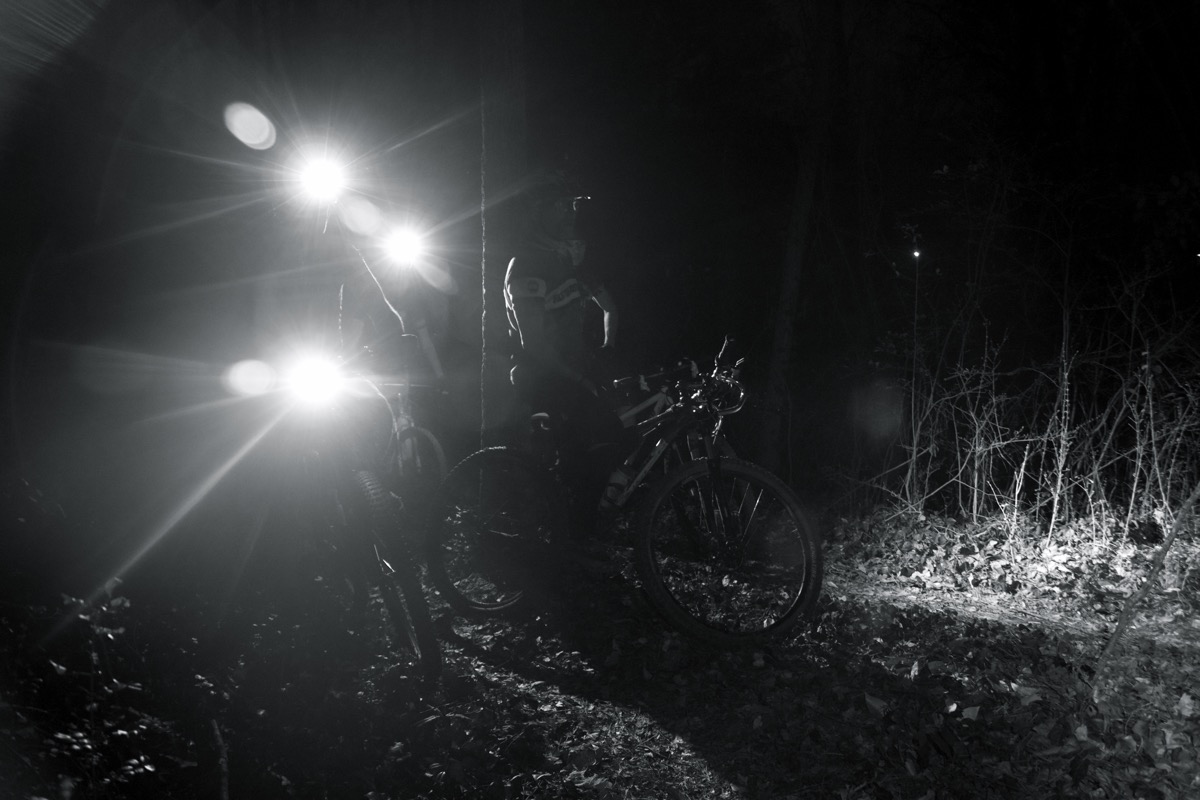 At the end of the night, my experiences mountain biking in the city always seem to make technical trail dangers feel a little smaller. Or maybe just slightly less important.

Progression
MTB Riding Position Breakdown: The How and the Why
Gear
Trace36 HLR Fork from X-Fusion Cements the Brand's Commitment to...
Gear
Hunt Revises Enduro and Trail Wide Wheels, Still Retail Under...
Community
From Pup to Trail Dog: How we Prepared our Singletrack...
Subscribe
Login
Please login to comment
12 Comments
Most Voted
Newest Oldest
Inline Feedbacks
View all comments

That sounds dangerous indeed. Wow. Great write up, and it motivates me to finish up a related article. 🙂

That’s very well written, and it makes our hometown sound scary. I know those streets and areas.

Yeah, I’ll take the bears and mountain lions any day.

I am a police officer in the Metro area. The LAST thing I would ride would be anything in downtown Atlanta after dark…even during the day is questionable. Just watch the 6 0’clock news every night…somebody is getting shot/stabbed/assaulted in Atlanta. Some of it never makes the news, I know. Maybe I am in “police mode” too much, but its a good thing, most of the time. If you just gotta ride it for the thrill, your danger meter has to be in the “red zone”. You never know what you will run across (as evidenced by the op). Personally, I would carry a concealed weapon. Too much is at stake (for me) to tempt fate.

Agreed, if anyone does this ride just for the thrill of it they’re not doing it for the right reasons. Most of us live in town so these are our neighborhoods and with families at home, night is the best time for us to ride.

One of the guys who comes on our ride occasionally is an Atlanta police officer and I’ve spoken with him about the risks involved. No, he doesn’t carry a firearm in his hydration pack but he does recommend being smart and learning to read the environment.

Dang, that is not a good thing to hear at night. I am always more antsy at night than during the day but stuff like this can happen at any time. Good story. Be safe and keep the rubber side down.

This ride is Darwinisms way of weeding out the stupid. Thrills and chills and spills have a price, okay?

Good story though! But again 1 can achieve the same “thrills” by walking or even driving through bad neighborhoods. There are enough dangers on the road for us cyclists from cars alone.

That area sounds dangerous. Why not take the drive to Blanket’s Creek or other MTB trails for the night rides instead of the urban biking? Too much risk and doesn’t sound fun.

“Perhaps drug dealers and prostitutes will consider moving their business out of city parks after seeing half a dozen bright lights, seemingly coming out of nowhere, speeding toward them at night.” <– This was my thought after finishing up work at Sykes Park. Found a cash register drawer that someone ditched in the woods as well as some used condoms on the ground. Hopefully repurposing the park for mountain bikes instead of illegal activity will be a benefit to the surrounding community.