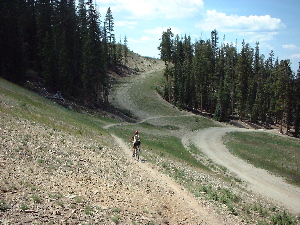 Strap on your body armor, Keystone just added 6 new downhill trails to the resort this summer including one run called “Money” that features 22 tabletop jumps. There’s also a new 18-foot wooden corkscrew that I gotta see to believe, unfortunately I haven’t been able to find pics. Lift tickets are $30 for the day or around $269 for an unlimited summer season pass.

Mudhunny and I went out to Keystone several years ago and rode the lifts just to check out the scene. We were both on hardtails and we mostly stuck to the green and blue trails but that was enough. For those who poo poo the experience since there is no climbing involved obviously haven’t tried downhilling. My arms and wrists were completely spent after just 3 runs when we decided to call it a day. We were especially surprised it wasn’t like downhill skiing where you could do a dozen runs in a single morning without getting tired.

Maybe we were slow or maybe it was the bikes but it seemed to take an hour just to make it down to the bottom. Unlike ski slopes that cut straight down the mountain most downhill trails zig zag through the trees to keep the descent manageable.

If you’re a cross country rider and you’ve never given downhill a try, definitely check out Keystone to see what it’s about and send us pics of the updated terrain!