You may not think the residents of Philly can shred; perhaps you think their waking hours are spent honking at each other, eating dog food sandwiches cheesesteaks, acting crass at major sporting events, or feeling inferior to New Yorkers. You’d be right for thinking all these things, but for the select few who love dirt, two wheels and gnar, there are fantastic MTB options in and around the City of Brotherly Love. Let’s go down the list; priority will be given to those trails accessible by bike. Yup, we’ve got that too. 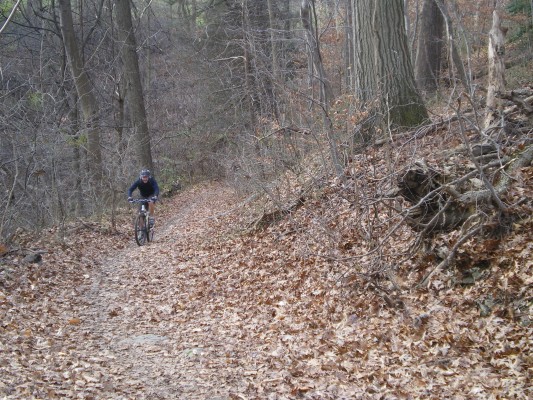 A seriously long name for what locals call “The Wiss.” Part of Philadelphia’s Fairmount Park system, the Wissahickon offers 14 miles of singletrack above the valley created by the creek that bears its name. Parallel tracks on both sides of the valley are accessed by Forbidden Drive, a packed gravel path that runs the length of the park. An added benefit is that if you live in the city, Forbidden Drive gives you access to any section of the system, no driving necessary.

Once you’re there, get ready for technical climbing, fast descents, and a well groomed new section in the north section of the park. No worries about getting lost either – you’re on a big loop with the creek down in the center and neighborhoods around the borders at the top. Shred at will, keep the water below you, and you’ll be good to go.

Also in the Faimount Park system, (which covers 10% of the total area of Philadelphia!) Belmont Plateau is tighter, faster and has much less elevation change than the Wiss. This area is fantastic for a single speed 29er which is what the cool kids are riding in Philly these days.

For something like 23 years in a row, Belmont has been home to the Thursday Night Races. A dedicated group of trail wizards get there early and sort out a sweet, fresh course each week. Logs are lain, sections are shunted, and paths are chosen for highest technical challenge. Beginners do one lap, sport class does two, and the experts rip out three circuits through this wild area that butts up against Interstate 76. Those poor suckers are grinding gears to escape or enter the city on the most congested road on the planet (*citation required) while you can be turning yourself inside out mere yards away.

The Thursday races draw some of the fastest dudes and ladies from the Philly area, so think about who’s behind you before you stack up the pack dismounting to clear that log (they can probably clear it, make way). And lest you witness the wrath of the wizards, don’t wear down the carefully maintained trails by being a “skidiot” (you know who you are.) After the races there’s usually drinking, merriment and telling of tales, so bring 6 of you favorite brew and share with the crew. 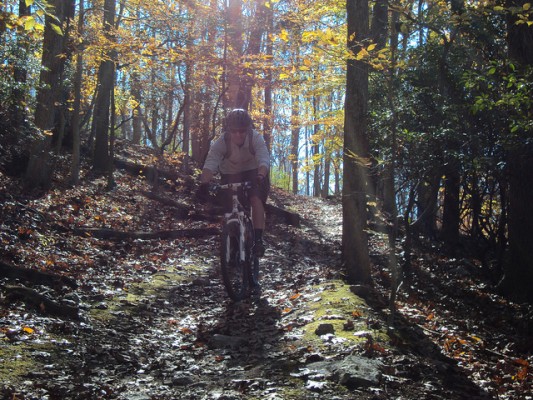 Sweet baby monkey I love this park! I’m not ashamed to admit why either: it’s easy. It’s a short drive down I-95 from Philly, it’s in Delaware, and it’s pretty flat. Nothing super technical, no lung-busting climbs, just cush, groomed, flowy singletrack. As the review in the title link says it’s “Like flying!” Damn right it is, and wicked fast to boot.

1. Get yourself a lightweight, snappy hardtail (like the Breezer Lightning pictured that I had the privilege of helping bring to market), 2. eat plenty of Wheaties before you head out, and 3. shred for hours. Spring, summer and fall, White Clay has something for everyone and can get a bit crowded on the weekends. This is one place worth playing hookie for. I’ve spent many a weekday with my bike, my camera, and a few energy bars hitting the majority of the 24 miles of trails. Not one of them is a dog and as a bonus they threw in a skills course with teeter totters and raised sections with enough potential for cracked ribs and contusions that I’m recommending you ride with proof of insurance. Walk it before you ride it.

Fair Hill is in the neighborhood of White Clay. The trail shares many of the same high points: fast, flowy, and well looked after. You’ll find more technical sections than White Clay, but we’re not talking double black diamond stuff. Bike Line hosts a sweet race here in conjunction with the Mid Atlantic Super Series which is a great way to start the season if you’re interested in racing.

Grab a trail map and get exploring. There’s 80 miles (!) of dirt to explore so you may never hit the same combo of trails twice. It was a favorite of mine and my #1 riding buddy Jim (pictured) when we could line up a full day away from work. Pack a lunch, ice some coldees for after the ride, and if you’re riding with a thrasher like Jim, pack some gauze. 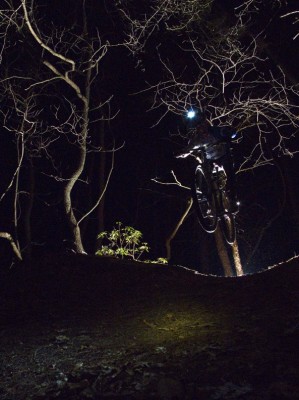 I was introduced to these trails by friend and coworker Brian. It was his local spot (he’s a Jersey dude, but way too cool for such labels) and it became our regular after-work shakedown. As a matter of fact, I’ve never been on these trails in the daylight. Those were the salad days of my Magicshine and man did I put all other lights to shame. It didn’t last, but that’s for another post…

Like Belmont Plateau these are tight, twisty trails in a relatively flat setting. Carry your momentum up and down the quick pops and climbs, be careful on the roots if it’s damp or misty, and don’t bog down in the few sandy spots – it is Jersey after all. The trails weave in and out of stands of pine that scent the air as you tear through. If you see a boulder tagged with the LWC logo don’t be alarmed – this singletrack is revered and looked after by Lone Wolf Cycling and they mark their territory like… you get the picture.

CCC has a tangled network of overlapping routes so go with a local if you can. You’ll be glad you did. Plus you can brag that you rode the informal testing grounds for bikes and gear under development by a Big Deal Bike Company.