After discovering the Tanasi trails on the banks of the Ocoee river in Tennessee a few weeks back we were stoked to ride the Chilhowee trails right down the road on the opposite side of the Ocoee. Luckily we picked up a map of the trail system the last time we were in the area and the trails were all marked ‘Easy’ to ‘Moderate’ on the map. We plotted our route to maximize mileage while avoiding backtracks and after a quick lunch of PB&J sandwiches we hit the trail around 1pm.

The trailhead is located beside Lake Ocoee and we knew this would be an ‘up and down’ ride so we put our heads down and began the climb up the Clemmer trail. The doubletrack / wide singletrack trail climbed nearly 1,000 feet in 3 miles or so but it was all rideable (though a little rocky and rooty in spots). We continued the climb on the Slickrock loop and found a short stretch of real singletrack but the roots and rocks generally sucked our momentum through the short flat to downhill stretches.

Rejoining the Clemmer trail we headed toward the (unnamed?) upper campground and rode a nice downhill stretch through a damaged forest area that afforded great views of the surrounding peaks. At the campground we had a little trouble staying on the trail as it wound across paved roads and campsites but eventually joined up with the Clear Creek trail. 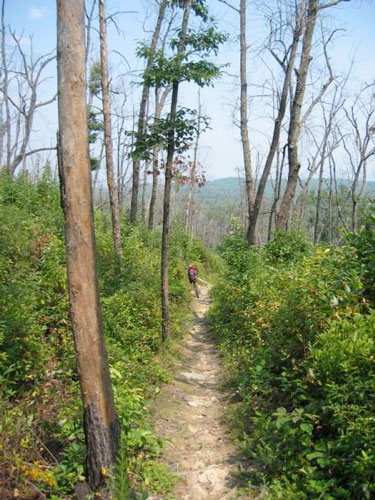 The trails at Chilhowee are well marked with signs but we would have been completely lost without a map to tell us how all the trails connected. At one point the copier-paper map became completely soaked with sweat and we carefully placed it on the hot asphalt at the campground to dry it out. Phew.

The Clear Creek trail starts out like most of the other trails as a wide path with rocks and roots and after about a mile we could hear the rushing water of Benton Falls on our right (though unfortunately we missed seeing it as there are no official signs for it on the Clear Creek trail). Eventually the Clear Creek trail began to descend and the trail became rockier and narrower until at one point I swear not even Hans Ray could have stayed on his pedals. After walking our bikes past the tough stuff we were rewarded with a fast forest road downhill with sweet water breaks perfect for catching air. We finished the ride on the Real Wet route which included a couple pretty wide stream crossings and some overgrown doubletrack. The trail eventually dumped us on Hwy 30 where we rode about a mile back to the trailhead. All in all it felt like a ton of climbing for just a little downhill but that could just be me. 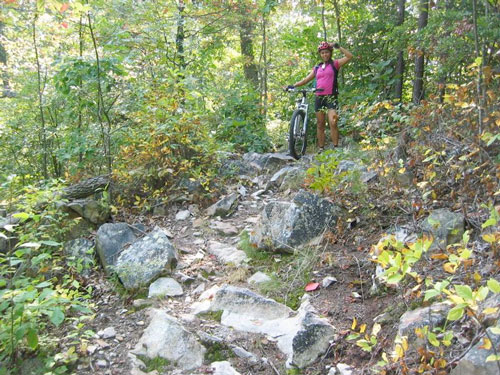 To be honest we went to Chilhowee hoping for another Tanasi-like experience but what we found instead was a Fort Mountain (to use a nearby trail system as comparison). After reading more I understand some of the interior trails at Chilhowee might be closer to what we were looking for but it will be a while before we go back – especially with more trails at Tanasi to explore. Either way, it’s always good to ride new dirt!