Editors note: Andrew and Matt are two Americans who recently left their jobs and headed to Europe to tour around on their mountain bikes for a few months. Their plans include seeing a stage or two of the Tour de France, taking in some beautiful scenery, riding some trails, and finishing up at Oktoberfest in Munich, Germany. Some guys have the life, eh? Look for occasional trip updates and ride reports from the wandering duo here on the Singletracks blog.

After camping for a couple of days at the edge of the Dolomites, we decided to leave Lago di Santa Croce (Italy) behind and set out for Cortina. Cortina is a well known ski town that is situated right in the heart of the Dolomites, and we were able to find a trail map online that showed a network of 15 different mountain bike routes running through the mountains surrounding town.

Our route that day was only about 70 km, but we knew that our final destination was 800 meters higher in elevation so we were prepared for a day filled with climbing. Surprisingly, the road that we were riding avoided the steep rocky peaks that fill the region and followed a relatively flat river valley for the majority of the day. After making great time during the morning, we stopped in Pieve di Cadore to get a couple of sandwiches and figure out where the next turn was. A few locals walking by stopped to admire our loaded down bikes (particularly Matts trailer) and informed us that to get to Cortina we needed to get on the bike path just downhill from our lunch spot.

We followed their directions and got on the greenway to ride, wondering how far it would take us before we were forced to move back onto the highway. We rode kilometer after kilometer before stopping to ask another local who told us that the greenway would take us all the way to Cortina, covering the last 27 km of our day. As it turns out, the path is a former railroad that has been converted into a 37 km cycling and pedestrian path. This provided us with a much more pleasant ride since the climbs were all gradual and there was no traffic to deal with. 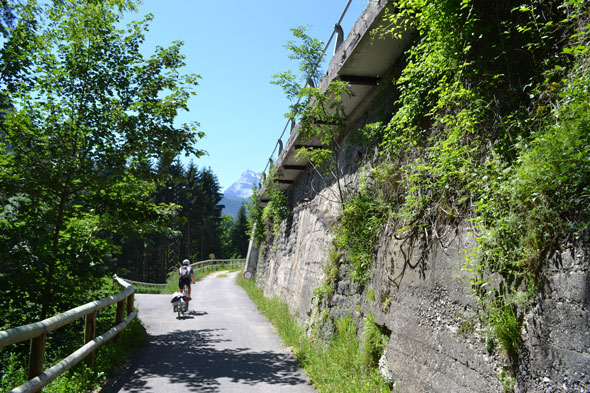 Matt riding the greenway to Cortina

We made it to Cortina in the mid afternoon and found a campground to spend the night. After settling in, we headed in to town and went to the local bike shop just in time to find that they were closing up for the day and the only employee there didnt speak English. We picked up a free trail map and made plans to return first thing in the morning, then went back to exploring our new surroundings for the evening.

We returned to the same shop the next morning to have a quick repair done and get some more information on the trails. While the mechanic was working, we asked another employee who spoke English about the trail we had chosen and found out that none of the bike trails on the map were actually singletrack. Due to conflicts with hikers, bikes are not allowed on the local singletrack, only on dirt roads. He then recommended a different route than the one we selected and told us that it was the most complete tour of the region. The stats for the ride were daunting: 48 km with 1,500 m of climbing (30 miles with 4,900 ft), but we figured that since it was actually dirt roads instead of trail that we would be fine. 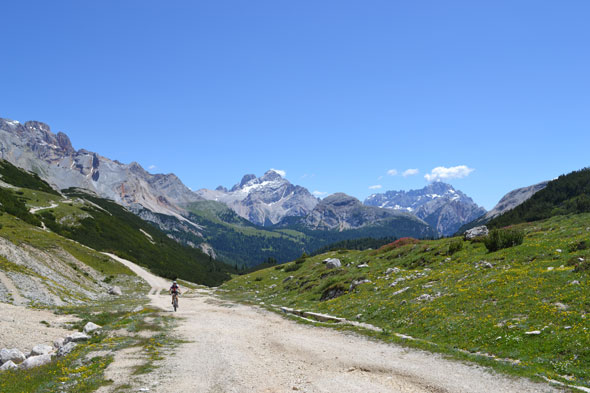 Ready to ride, we left town on the main bike path which is an extension of the same rail-to-trail path that brought us into town the day before. In just a few kilometers, the pavement turned to gravel with a slight climb through tunnels and over bridges and then back to pavement where we began the first actual climb of the day. The road was very steep and with tired legs from touring, we shifted to our lowest gears to spin our way up. After climbing for the better part of an hour, we reached the first mountain hut of our route, Malga Ru Stua. 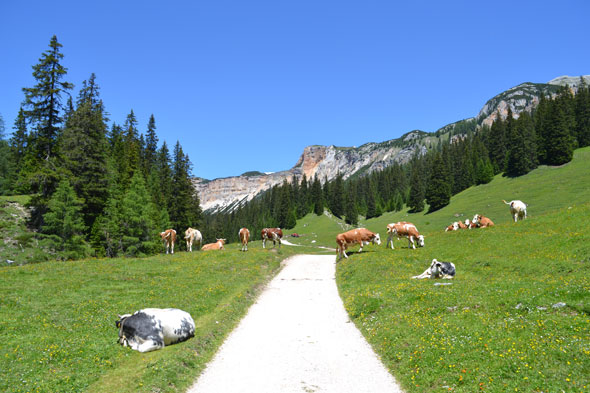 This hut also marked the end of the pavement and return to gravel road for the rest of the day’s ride. We bypassed the hut and the cows that were lounging on the side of the road to continue our climb up. This section of road started out steep but rideable, but after a few switchbacks the loose rocky terrain and even steeper gradients forced us off of the bikes to hike our way up. After leveling back out to a reasonable gradient, we got back into the saddle and continued to grind our way up to the first summit, Rifuggio Senes at 2,116 meters.

At almost 1,000 meters higher than our starting elevation, we had climbed a long way and were ready for some food. We parked the bikes outside of the mountain hut and took a seat at a vacant table. The restaurant offered us cuisine that is a mix of Austrian and Italian, reflecting the history and mixed culture of the Dolomites which is evident in many of the small Dolomite towns, as well as one of the most amazing lunchtime views I have ever seen. 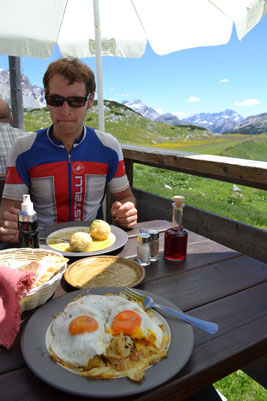 Lunch with a view

With our stomachs full, we prepared to tackle the first descent of the day which would take us down over 500 meters. At the top, the ride was fun with hard packed rocks and smooth trail that allowed you to carry a good bit of speed through the corners. The further we went down the trail the steeper our descent got, making the ride more dangerous since the rocks that make up the trail vary in size between sand and boulders. 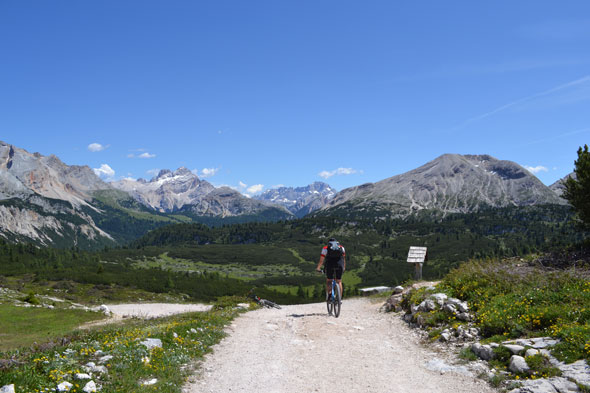 At the top of the descent

We carefully rode down much of the descent trying to keep our sliding back wheels under control, until the road eventually got too steep for the rocky surface and turned into large slabs of broken concrete. We wound our way down endless switchbacks as we rode through a canyon that finally bottomed out. With the steep grades and loose rocks that made up the road surface, we were forced to ride the brakes the whole way down and never got an opportunity to really let loose and fly downhill. 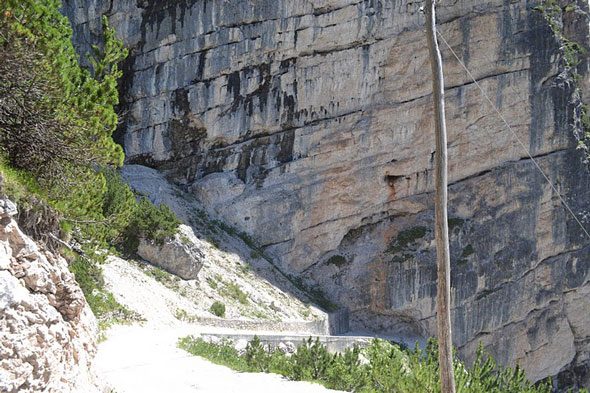 The trail winding through a canyon

The second climb of the day began steep as well, but after the first couple of switchbacks it became more manageable and we were able to ride the entire way up. After an hour or so of spinning uphill, we topped out again at over 2,200 meters and began our final descent back to town. This downhill was much more fun than the first, with a more gradual loss of elevation and better traction beneath the tires. The scenery was also spectacular with a couple of small lakes beside the road and more dramatic rocky peaks above our heads. 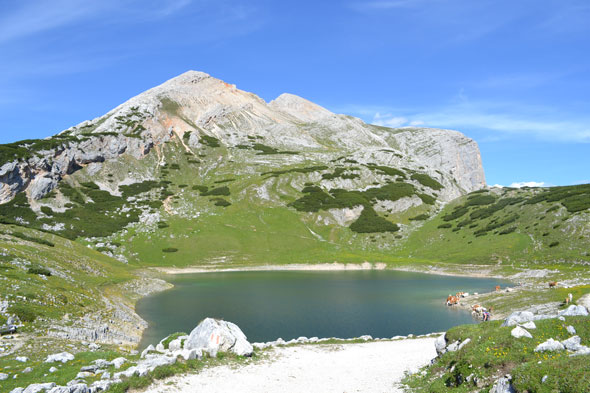 One of several lakes we passed during our ride

Our second day in Cortina greeted us with tired legs and rainy weather, so we took a day off from the bikes and spent some time around town. While looking for a shop where we could restock on tubes, we came across 2ue 2ue, a different local bike shop than the one we visited previously, and asked the employees about more good trails in the area. To our surprise, the mechanic said that there was one singletrack trail in Cortina and marked it on the map for us to ride. With this information, we knew exactly what we would be doing the next day.

With better weather the next day, we shared breakfast with our Slovenian campsite neighbors and geared up for our ride. We decided to take the paved road up to the trail despite there being a couple of dirt options since we were not planning to spend another night in Cortina and had to be out of the campground by 2:00. The climb out of town was once again long, but not incredibly steep like many of the trails in the area. We knew we were making good time since we were able to stay with a group of roadies who were climbing just in front of us. Once we got to the trailhead, we veered off of the pavement and started to enjoy the first rideable singletrack in town. 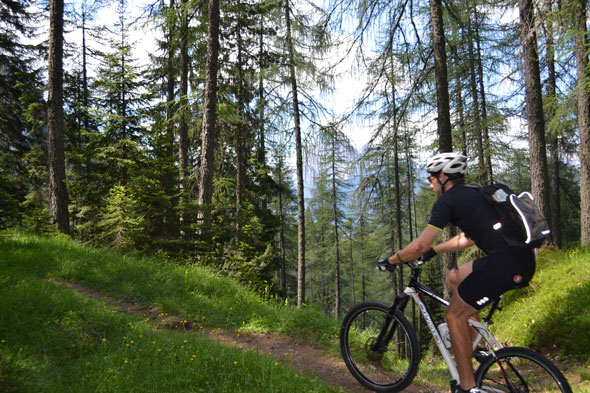 There was one hike-a-bike section early on through a rocky stream, but after that the trail rolled through the woods on hardpack dirt before spitting us out on the side of the mountain with a panoramic view of Cortina and the mountains south of town. The trail was rocky here, but we were able to pick our way through and ride along the ridge. 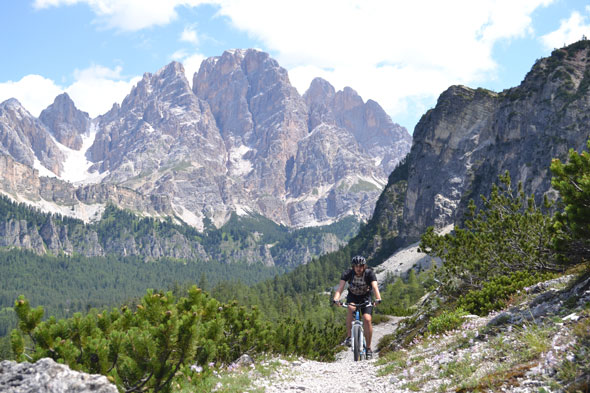 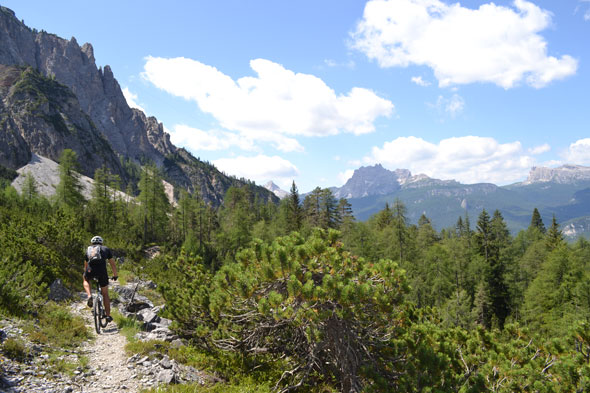 Once the descent began, we lost elevation in a hurry as we made our way down the steep, loose doubletrack before leveling out in a grassy field with wildflowers all around us and a view of the 1956 Olympic ski jump facility. We turned onto the next trail on our route and began flying downhill once again through the trees and finally coming out behind a hotel near town. We coasted back to our campground excited to have ridden actual singletrack, but also a little disappointed that it was already over. We had covered 5-6 km of trail on the ride, but knowing that the only other riding in the area is on dirt road kind of spoils Cortina as a mountain bike destination.

Overall, Cortina is an great little town. There are plenty of recreation opportunities for outdoor enthusiasts, including climbing, hiking, and cycling. If you are looking for a destination with a variety of activities, then this may be the spot for you and bringing a mountain bike along will offer you some epic rides and access to lots of beautiful scenery that you would otherwise miss on foot in a day’s hike. However, if you’re looking for lots of singletrack trails, be aware that it will be very difficult to find in the Dolomites and you may be better served to look at another region.

Want to hear more about our trip? Read more at mtnbikeurope.blogspot.com.

Culture
The Venerated Italian Superenduro Series is Paused for Another Season
Trails
Embrace the Unknown: Take a Trip to New Zealand
Trails
11 Ways Mountain Biking the Alps Is Different from Riding...
Gear
Pack Up and Explore New Trails with These Travel Picks

So jealous. Even though it sounds like you guys didn’t find a lot of singletrack in the Dolomites, those are better than any dirt roads I’ve seen on a mountain bike. Can’t wait for the next update!

Gorgeous photos, and great write up! Definitely the trip of a lifetime!

I hope you guys find some real singletrack soon!

I always wanted to do the Dolomites

Looks and sounds like a great trip. I will be skiing/snowboarding the Dolomites this January. I cant wait!

Andrew is a friend of mine, we used to work together before he left for this trip. They have been over there for a little over a month now!! Yeah, count me as jealous.

@Dustin Gaddis, and you didn’t go with?!

Beautiful place even if you did not find singletrack. What views!

Nice trip guys, I was over there in August-September and was awesome. Found some great tour guides at this company here : http://dolomiti-experience.com/
They were super cheap and knew the place so well, I did some trails which arent even marked on the map. They have some English speaking tour guides and are good fun. I dont usually take guided tours, but paid off as there is so many secret places to see.