Most people heading to the St. George, Utah area to bike are probably going to ride at Gooseberry Mesa.  Located high above the towns of Springdale and Hurricane, Gooseberry Mesa is a network of trails running over slickrock for miles and miles.  The views of Zion National Park and the surrounding valleys aren’t too bad either.

You can bike at Gooseberry from at least mid-February through early November; some years you can bike here year round! 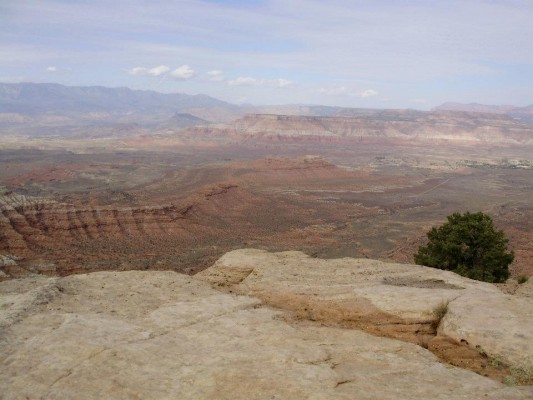 View from one of the many trails in the Gooseberry network

The day we biked here (our next two got snowed out) we spent four hours riding over rocks and down single track paths through the scrubby trees.  Like on other rock trails, the paths are marked with white dots that point you in the right direction. 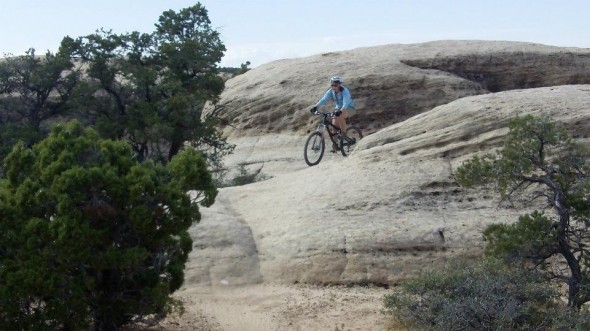 You could, and probably should, spend a few days biking here.  The good news is dispersed camping is allowed nearby so you can bike late, sleep, get up and do it all again without having to drive all the way back to Springdale or Hurricane.  (that’s hurri-kin, not hurr-i-cane).

Then again, if you’re camped way up on Gooseberry Mesa, you might not be as likely to travel around to some other great trails in the area.  A few that we’ve checked out in the past include: 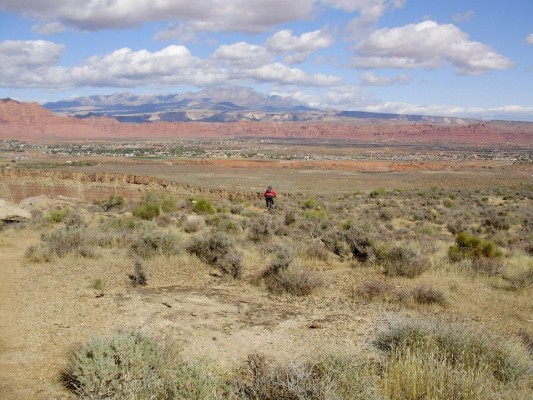 Barrel Roll – Located in nearby Santa Clara, this trail is just fun, rolling singletrack.  The views are awesome!

Little Creek Mountain – Like Gooseberry only more backcountry; lots of singletrack connecting to patches of rock through high desert terrain.

Bear Claw Poppy – You can ride this trail from either end.  Directions on the link are from the top, but if you can find Navajo Drive near Tonaquint Drive in St. George, you might be able to find the opposite end.  It’s fun and rolling with a few technical features thrown in for good measure.

If you’ve ever watched videos of the Red Bull Rampage, you’ll recognize the scenery in the area between Virgin and Hurricane near Gooseberry Mesa. The Rampage is back this year and will be held October 4-6 in case you’re planning a fall trip. 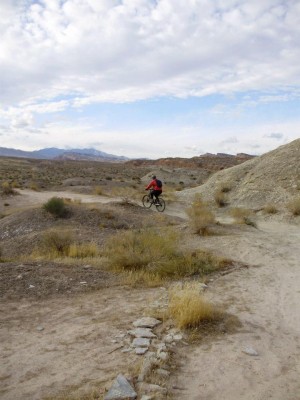 If you choose to stay in town instead of camping, try Springdale first.  The Bumbleberry Inn is a popular choice, though some say it’s run-down and others describe it as merely “adequate.”  A pricier option, but very nice, is the Desert Pearl. There are plenty of other lodging options here and you also have the option of camping in Zion National Park.

Hurricane has a few typical chain hotels but the restaurant choices here are few and far between and most likely will not be able to provide you with a margarita to go with your chips and salsa.  You can always drive into St. George to find just about any eating establishment you want but again, whether or not they have beer/wine is questionable. (3.2 beer is available at most grocery stores.  I recommend the Wasatch Brewing Company’s Polygamy Porter.)

Oscar’s Cafe in Springdale is quite popular – they do breakfast, lunch and dinner.  The Bit and Spur is also a good spot for Mexican.  They have unique items like sweet potato tamales and Zuni stew!

In Hurricane, Lupita’s is good for Mexican food.  But honestly, if you’re from anywhere east of Utah, make sure and treat yourself to an In-and-Out burger while you’re here!

Finally if you happen to bail in the middle of a tough rock portion at Gooseberry and break a few spokes (not that I know anything about that) the guys at Over The Edge in Hurricane can fix you up fast! In St. George, Red Rock Bicycle should have everything you need including rental bikes.

Saint George may not have been a mountain biker in his day but this little town in Utah certainly has a modern reputation for killer mountain bike trails!

Good report. We spent a few days in St. George several years ago and found the restaurant scene a little lacking but that’s ok because the singletrack scene is rocking!

Church Rocks is another trail close to town that is good if you want to fit just one more ride in.

We planned to go back last year but had to change our plans at the last minute…it’s on the calendar again for this year. We’ll see! Definitely enough riding there to keep busy for several days!

High on my to-do list. One of these years!

Rode Gooseberry several years ago, loved it. Only one thing keeps me from going back; that road going in about beat me, and my Kenworth to death. The price I pay for getting to mix work, and play. If anybody knows where I could park my tractor near the beginning of the unimproved dirt road, please let me know

Was in better shape and newly graded last time there.

Even though I live in SoCal, this is my “destination” area to ride and go several times per year. We just returned from a trip a couple weeks ago and have another trip planned for the Fall. We always hit up Gooseberry, the JEM Trail and Little Creek. Guacamole and Church Rocks are regular stops as well.

Road Warrior, I don’t blame you in a semi. The road up into Little Creek is definitely better than the road up to Gooseberry…except fro the last 100 yards. It’s no Gooseberry but you can drive right up to the trailheads at JEM and Church Rocks. Another option is to go during the Hurricane Fat Tire Festival and I’m sure you can ride to the trailhead with somebody else in the group. Last year, we had (2) groups of 6-8 people go up to GB.

I would add that the Zen Trail is a must ride, made all the more attractive by its close proximity to town. Notes on Zen here:
http://www.singletracks.com/blog/mtb-trails/riding-the-interstate-the-i-15-road-trip-edition/

Two trips to St George and I’ve hit, I’m guessing, about half the good stuff. Hopefully, I can get back some day to hit Barrel Roll and Bearclaw Poppy!

I agree, lot of great riding in the area without going to Gooseberry, but Gooseberry is unique, and my kind of riding.

Just got back from there two days ago. I passed Fruita and Moab on the way there having some second thoughts, but it was definitely worth the extra few hours getting to Hurricane. Kind of reminded me of Moab 20 years ago, and the biking was everything everyone says it is.